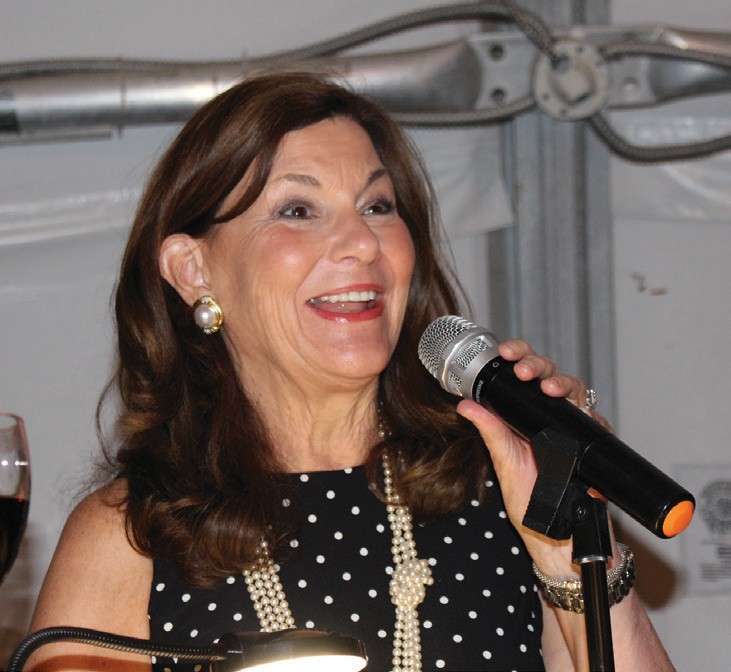 Incoming chamber chairman Linda Bailey spoke about her vision for the future of the chamber in 2017.

MC’s for the evening were Rorie Johnston, president and CEO of the Chamber and longtime Chamber board member Kevin Svetich, who traded quips throughout the evening.

Special guests were Escondido May­or Sam Abed and Marie Waldron of the 75th Assembly District, who made presentations to the incoming and out­going board chairwomen.

Special awards were given to the following:

Volunteer of the Year

The Jim Felix Community Volun­teer of the Year Award, given for “ac­tive and continuing community ser­vice, commitment of time, money and hands on involvement” went to Dana Nuesca, executive director for Seeds of Hope. Seeds of Hope works on both the national 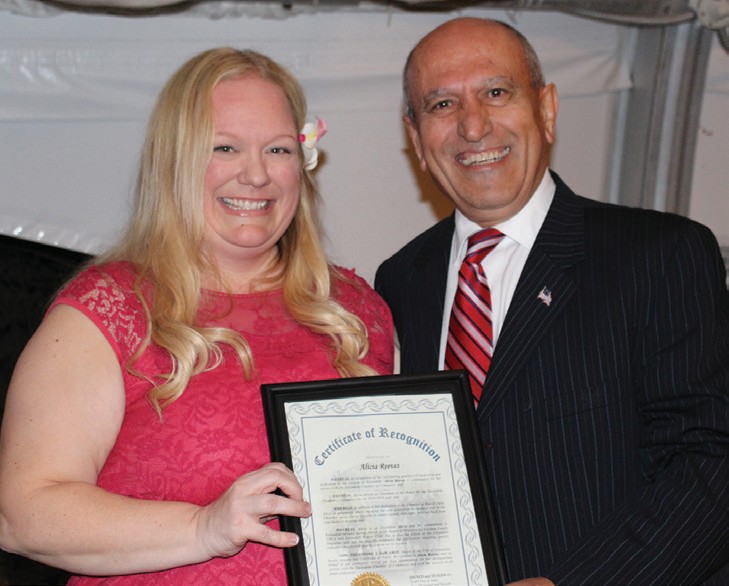 and local level to prevent and combat sexual exploitation/traf­ficking, drugs, alcohol and violence.

Nationally, Seeds of Hope works with the U.S. Embassy and are mem­bers of a Costa Rican task forced call Conacoes, which is working to change laws, investigation and conviction pro­cedures, and to train the student lead­ers of Seeds of Hope to go into high schools across the country to lead the youth of Costa Rica to take a stand and “Break the Chain.”

Locally, clubhouses provide after school and weekend classes in high- risk communities. The goal of the clubhouses is to give hope to children by providing preventative education, spiritual guidance, and restoration for girls and boys ages 12-17.

Nuesca also serves on the leadership team of the Xchange church in Escon­dido, which is actively reaching out to those in need and 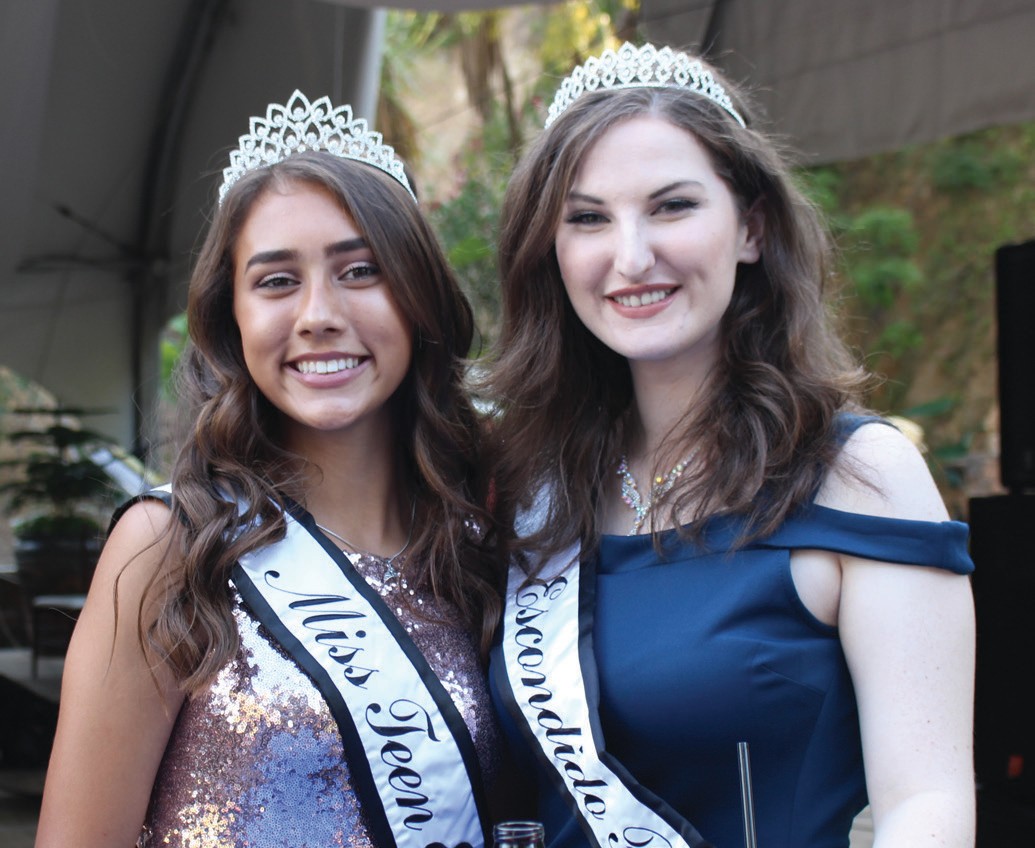 She and her husband, Kalani, have been married for 28 years. They have one son, who is serving in the Air Force, and three grandchildren. Seeing the face of her grandchildren and their innocence drives her to fight against sex trafficking for all children.

Tom Hawthorne was awarded the Jack Raymond Civic Engagement Leadership Award, an award estab­lished by the Chamber in 2008 to rec­ognize individuals, organizations and/ or programs that go “above and be­yond,” engaging, enhancing and ben­efitting our community.

Gregg Anglea, CEO of Interfaith, presented the award to Hawthorne, who provided the largest donation for the Veteran and Family Resource Center located at 250 N. Ash St., which broke ground on February of 2015. He noted that Tom Hawthorne and his wife, Doro­thy, provided 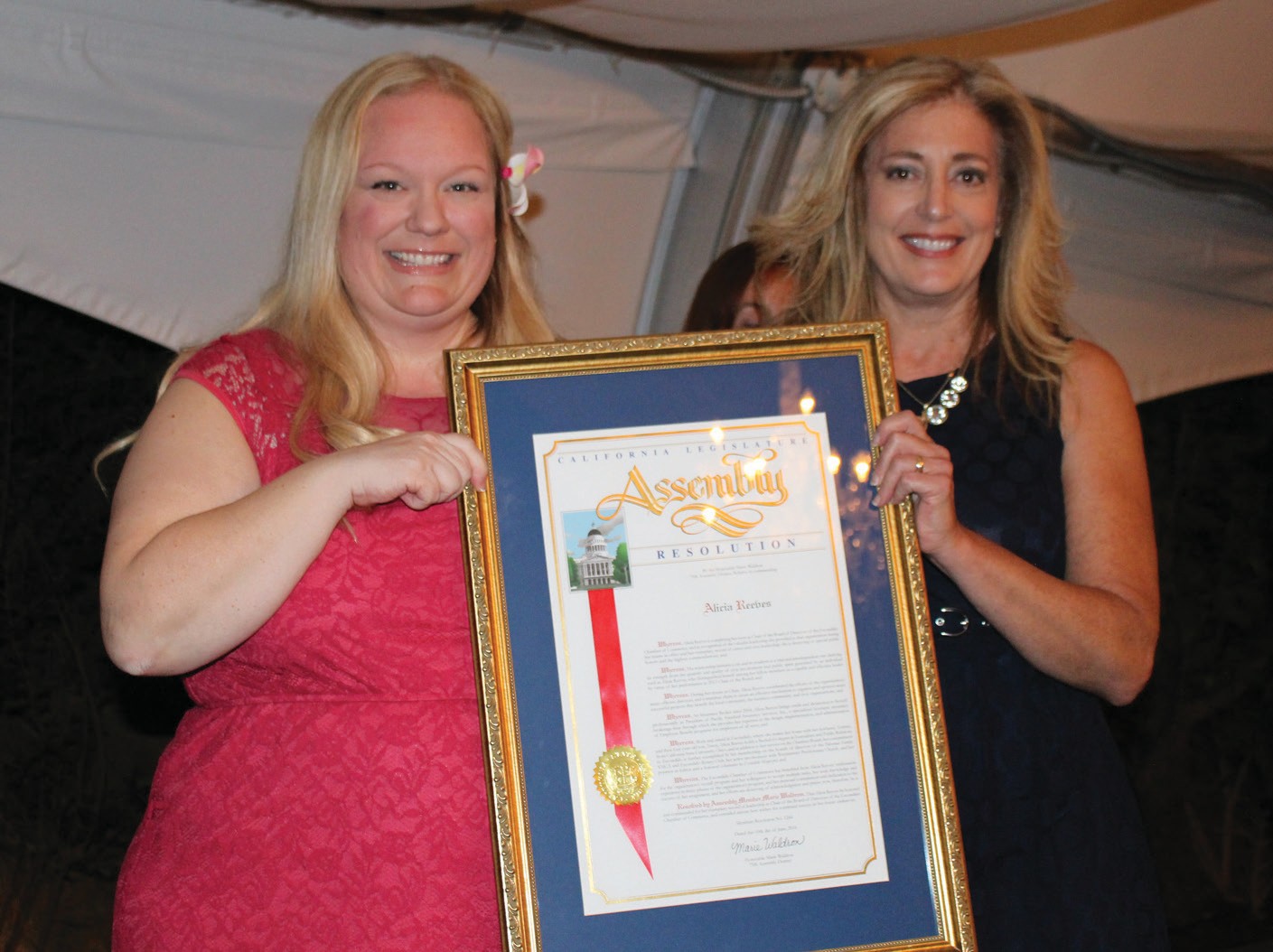 The outgoing chairman Alicia Reeves (left) is honored by Marie Waldron of the 75th Assembly District.

Community Organization of the Year

California Center for the Arts, Es­condido, was honored as Community Organization of the Year. This award is presented to an organization that has performed outstanding service for the city and is widely recognized by the community.

CCAE’s mission is to bring the com­munity together to discover, create, and celebrate the visual and performing arts. The center’s sprawling 12-acre cam­pus houses a 1,500-seat concert hall, a 400-seat theater, an art museum, free community events, extensive education programs and a full-service conference center. Last year 300,000 people vis­ited the center, which was voted as one of the Best Live Music Venues by the Union-Tribune Reader’s Poll and was top ten in three categories of the 2016 A-list awards, including Best Theater, Best Museum 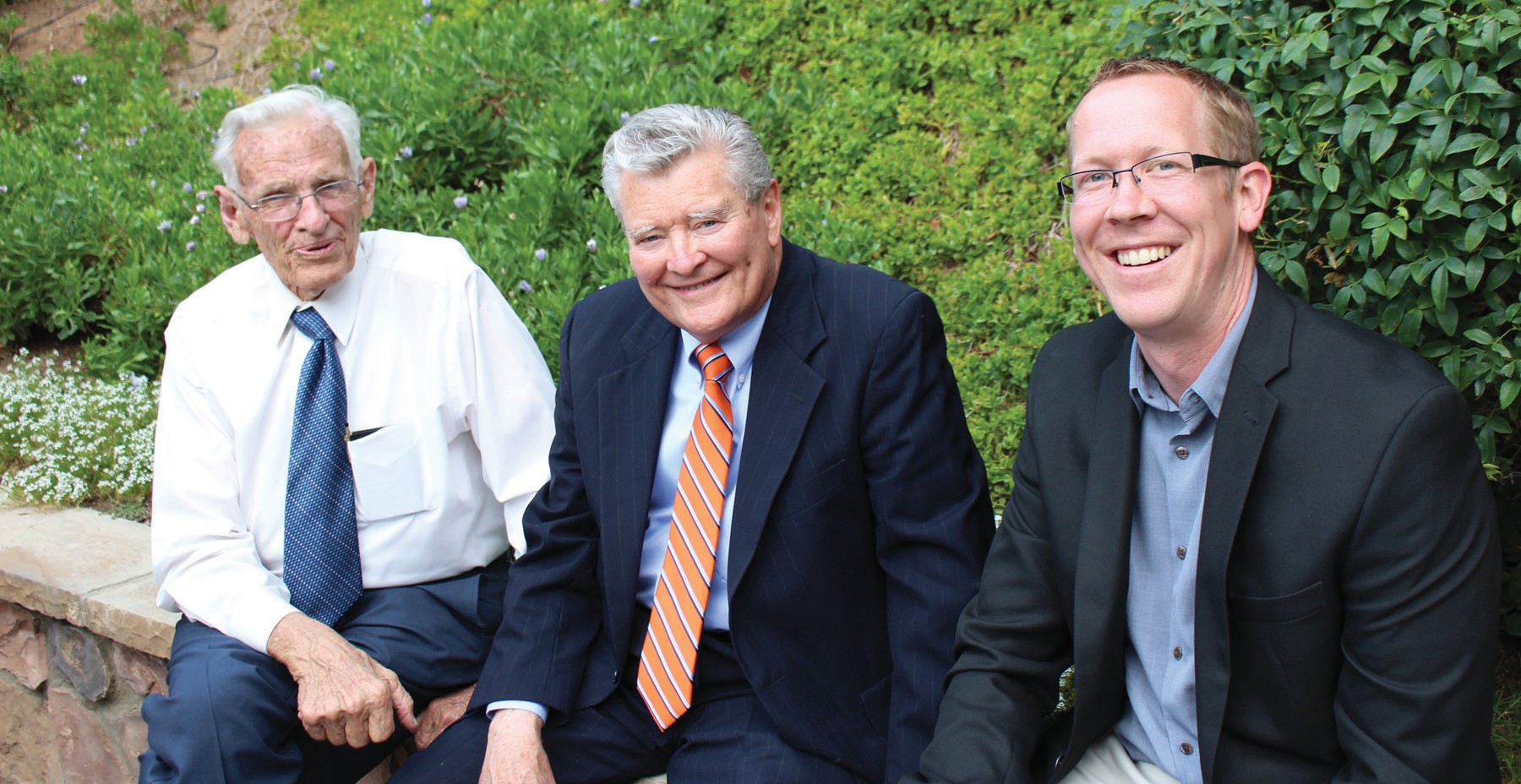 During the presentation Johnston quipped that she had seen Svetich on stage at the center for the “Dancing With our Stars” event during which many lo­cal celebrities demonstrated their danc­ing skills onstage. Svetich suggested that maybe next year Mrs. Johnston ought to give it a try. She said she’d think about it. The event raised $85,000 for the center.

Entrepreneur of the Year

Debbie Young of Sculpt Nouveau was honored as Entrepreneur of the Year. Sculpt Nouveau is a specialty coating and surface finishing company, which began 20 years ago and now has 23 stores distributing products in the U.S. Australia, Canada, the U.K. and Escon­dido. 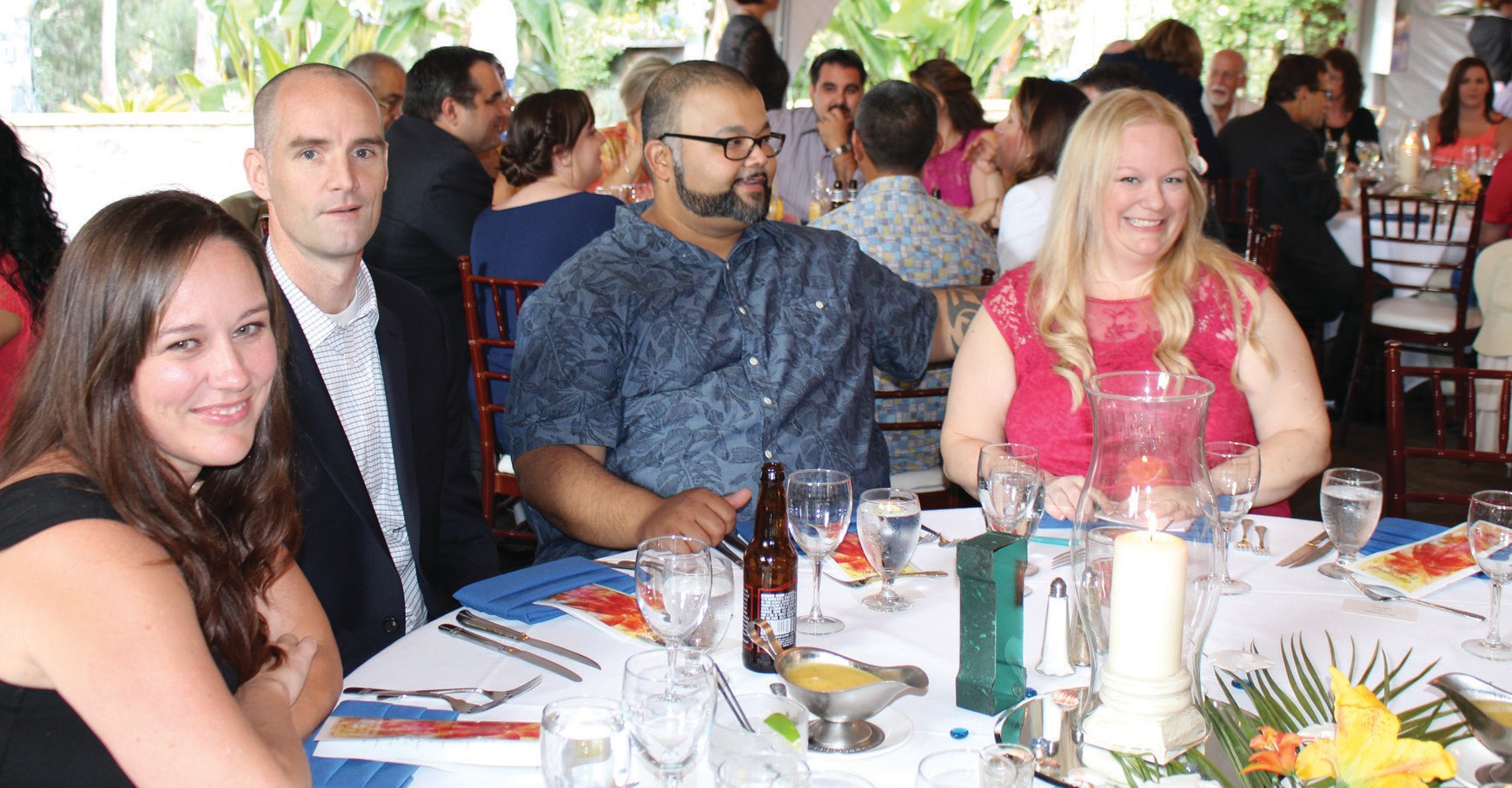 Alicia Reeves and her husband Tommy.

of them a veteran who has been awarded two Purple Hearts and a Silver Star in the Afghan war.

Svetich said, “Debbie gives back by contributing to many charitable organi­zations and she serves as a board mem­ber of the Escondido East Rotary Cub and Escondido Community Child De­velopment Center.”

Business Leader of the Year

Lounsbery described the long, suc­cessful arc of the Monforte family who opened the original restaurant in 1978 on Quince Street, with just three tables.

position of a Mexican restaurant. There was only problem: There was no restaurant, no menu, no staff—just an idea.

Monforte took up the challenge and started the restaurant between a wir­ing factory and an auto body shop. In the coming years the restaurant grew: First another 10 tables, then 20 more. By the 1990’s it grew to accommodate 150 guests with room for private par­ties of another 150.

Eventually Jose’s son joined the op­eration and in 2007 the family opened their other Cocina, this one in San Mar­co’s Restaurant Row.

In 2011, the Original Escondido res­taurant was moved to its current loca­tion at 890 W. Valley Parkway.

Montforte attended Friday’s installa­tion with virtually his entire family, who were all delighted to join him in accept­ing the award and posing for pictures with the plaque. 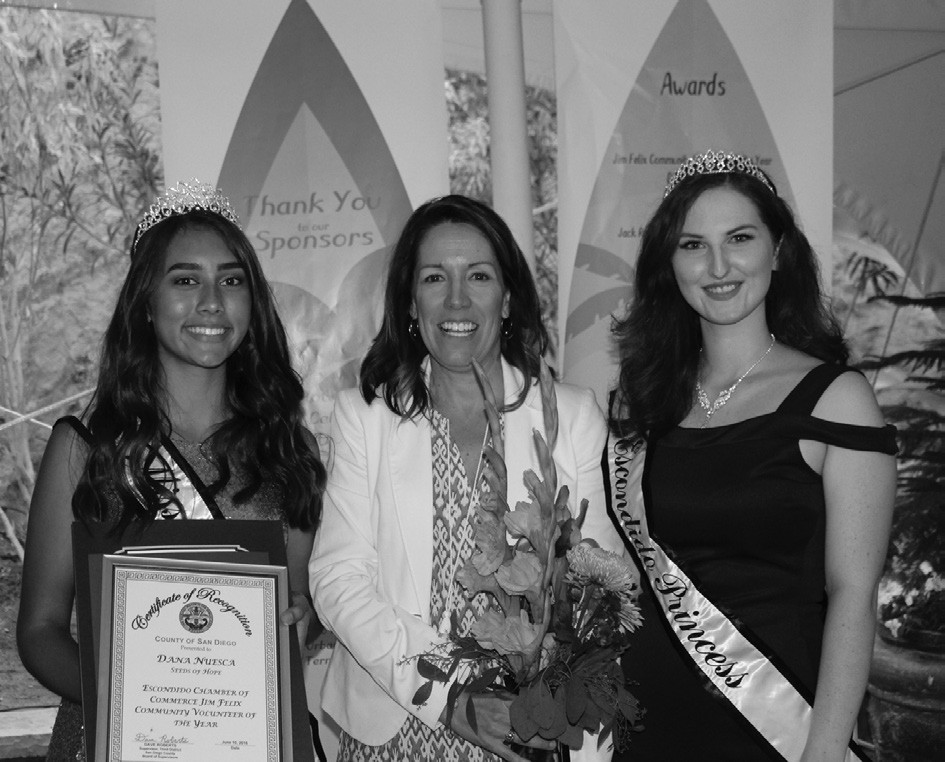 This award is given to an individual or business that works toward stimulat­ing the economy and quality of life in Escondido. The award went to Jason Han, of New Urban West, a privately held builder and developer of distinctive communities.

Han is responsible for identifying new investment opportunities and over­sees all aspects of execution, including acquisition, entitlements, project devel­opment, construction, sales and market­ing for projects in the San Diego area. Escondido and the surrounding area are home to projects such as Brookside at Reidy Creek Golf Course, Ranchos at Vistamonte in San Pasqual Valley, Oak Creek near Felicta Park, Amanda Es­tates in southwest Escondido and Har­mony Grove Village. In all his company has built about 1,000 homes.

Board Members of the Year

Outgoing Chairman of the Board Ali­cia Reeves selected 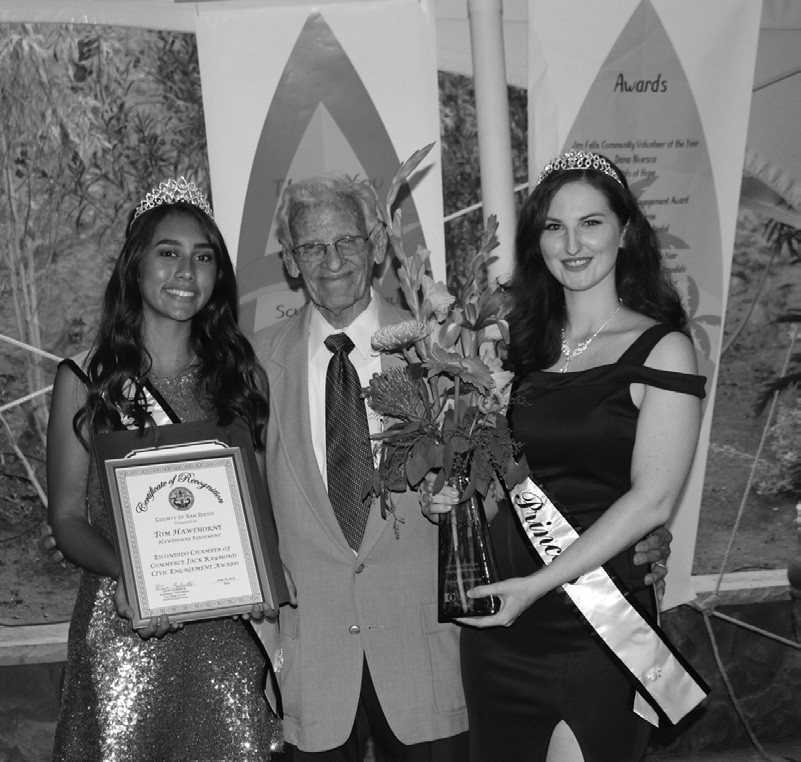 Dan Meyer and Paul Smith as Board Members of the Year.

Meyer of Escondido Disposal and Smith of Farmers Insurance were de­scribed as the “dynamic duo,” who took on the challenge of developing the Chamber’s annual Golf Tournament. By partnering with police Lt. Al Owens, they were able to raise funds for the Po­lice Athletic League. The police officer involvement in youth sports created a bridge between law enforcement and the community to ensure that Escondido is a safe place to live, work and play. The two will be planning the upcoming Golf Tournament on September 16.

Ambassador of the Year

Joe Coyle was recognized as this year’s Chamber Ambassador of the Year. A 30-year resident, he is vice president of business development for the Printer Repair Depot. He likes Zig Zigler’s 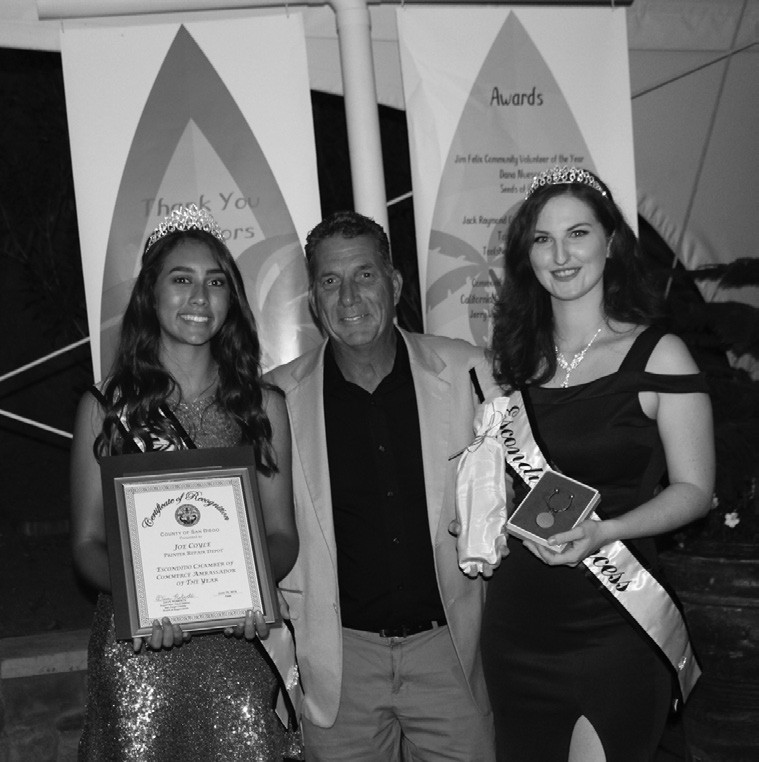 Right: Joe Coyle recipient of the Ambassador of the Year award.

quote, “If you can help enough people get what they want, you will get what you want.”

Outgoing Chairman of the Board Ali­cia Reeves was recognized for her year of leading the Chamber. She described how rewarding the year was for her, and how much she felt that she and board were able to accomplish. She thanked her business Pacific Standard Insurance Services, Inc. (where she is vice presi­dent) for its support, and thanked her husband, Tommy and family, including their 4-year-old son, Tommy for their support. During this period she was edi­tor of the Escondido Magazine, a publi­cation of the Chamber and was able to use her journalism degree from Califor­nia State University, Chico.

Jose Monforte and his family, owners of Cocina del Charro, received the Business Leader of the Year award. Also shown is Ken Lounsbury (far right) who presented the award.

the oath of office standing next to their tables.

Linda Bailey, the principal of Com­munity Strategies Group Inc., a public relations firm specializing in consen­sus building and community outreach, took the gavel and outlined some of her goals for the coming year. She de­scribed the Chamber as a vital compo­nent of the community that helps bring various elements of the city together. She has served on the Palomar Health Board of Directors and is past chairman of the Escondido Charitable Foundation and past president of the Rotary Club of Escondido. She is former CEO of the Escondido Chamber and received the Chamber’s Volunteer of the Year Award in 2009 and Business Leader of the Year Award in 2010. In 2010 San Diego Business Journal named her one of their Women Who Mean Business and one of their Most Admired CEOs.