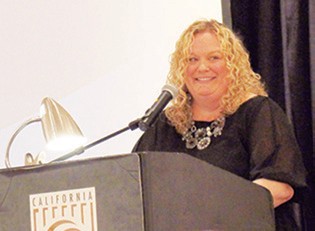 The Escondido Chamber of Commerce Friday night celebrated its 105th annual installation of officers and awards “A Masterpiece in the Making;” hosted at the California Center for the Arts, Escondido museum.

With members enjoying hors d’oeuvres standing and sitting surrounded by the museum’s works of art, the festivities included the installation of Alicia Reeves as incoming chairman of the board of directors.

The event was co-MC’d by Rorie Johnston, president and CEO of the Chamber and Kevin Svetich.

This is the tenth year that the Chamber has been in its new office at 720 N Broadway and the 20th year since the California Center first opened its doors—a fact that was recognized.

Svetich quipped, “I remember the old building. We thought the walls were painted green. Turns out it was mold— we had to wear hazmat suits for board meetings.”

Johnston noted that the new building a decade ago was “one of the greatest achievements of the Chamber,” and introduced a video that included interviews from some who were in charge of the Chamber and Escondido then, such as Harvey Mitchell, former Chamber CEO and Mayor Lori Holt Pfeiler.

The Jim Felix Community Volunteer of the Year award is given for active and continuing community service, commitment of time, money and hands-on involvement to Escondido community programs. The award was given to NK Towing and Roadside Service, and its owner Amir Iravani. Some of the programs he supports include San Diego Habitat for Humanity, Escondido Community Childhood Development Center, Boys and Girls Clubs, Rotary and Mothers Against Drunk Driving. His company’s Tipsy Tow Program is a free service that provides transportation for people too intoxicated to drive.

The Jack Raymond Civic Engagement Leadership Award recognizes individuals, organizations and programs that go “above and beyond” the norm in community engagement, enhancement, benefit and support. This year’s winner was Dr. William Randy Jungman, who created the Citracado Dental Group. Jungman began his community service over 40 years ago when he helped provide dental care in rural Mexico. He has served on the Chamber, the Jaycees, the City of Escondido Historic Preservation Commission and serves at all levels of the Boy Scouts of America. He is assistant scoutmaster for Troop 649 and has chaired and served on the board of the 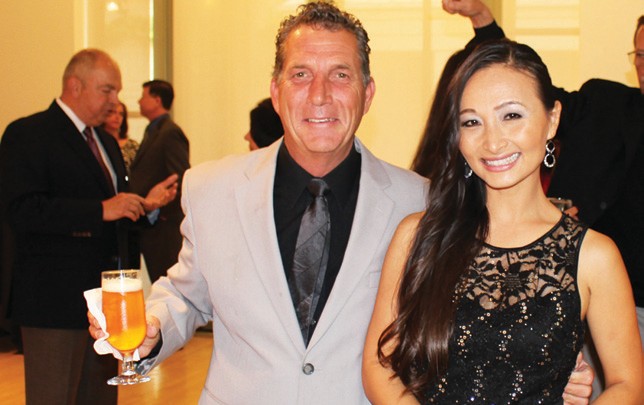 The installation is an occasion for dressing up and looking your best.

The San Diego Children’s Discovery Museum was the recipient of the Community Organization of the Year, represented by chairman of the board of the museum, Erick Altona. Accepting the award he described the children’s museum as “the Chamber’s success story,” noting that some of the seed money for founding the organization originally came from the Chamber. In the past few years the museum has gone from 15,000 visitors a year to over 100,000, something that Altona attributed to the vision of the museum’s young executive director, Javier Guerrero, who joined the museum in 2010.

Cameron Curry of Classical Academies was honored with the Chamber’s Entrepreneur of the Year award. Curry began changing the educational landscape of North County in 1999 when he opened the first Classical Academy Charter School. Today it has seven campuses, 3,800 students and 400 employees. It’s most recent success was the $25 million revamp of the old North County Times building into a high school, which opened in September.

Judith Jones-Cone, owner of perhaps the most visible business in town, the Escondido Lexus Dealership, was given a standing ovation when she was awarded Business Leader of the Year. The award was presented by past Chamber Chairman, and past recipient of the award, Ken Lounsbery.

The Family Owned Business of the Year award went to WA Stone Termite & Pest Control, which was founded in 1976 by Wayne Stone. It is currently run by Stone’s daughter Debbie and her husband, Mark Tammariello.

Autumn Dihn, of Arthur Murray Escondido Dance Studios accepted the Chamber’s Community Enhancement Award, given to the business or individual who works towards stimulating the economy and quality of life in Escondido. As Svetich said, “More than just fancy footwork, the Arthur Murray Escondido Dance Studio has been teaching Escondido and neighboring residents to dance since 1977.” The studio recently relocated to Grand Avenue & Juniper, where it supports Grand Avenue Beautification, Cruisin’ Grand, the Escondido Library, PAWS, Meals on Wheels, Toys for Tots and the San Diego Food Bank.

The Chamber Board Member of the Year—an honor selected by the outgoing Chairman of the Board—was also the incoming chairman of the board, Alicia Reeves. Reeves is an insurance broker and vice president of Pacific Standard Insurance. She serves on the board of directors for Palomar Family YMCA, is a member of Rotary and edits the Chamber’s Escondido Magazine.

Suszanne Southwell was honored as this year’s Ambassador of the Year. She has been a Chamber Ambassador for 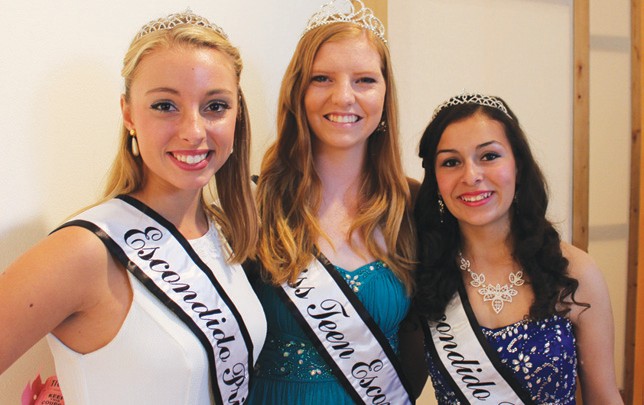 15 years. The Chamber Ambassadors are seen all over the city at various events such as grand openings or ribbon cuttings. Said Svetich, “This group of Chamber members gives countless hours and resources to the benefit of our Chamber and its members.”

Mayor Sam Abed installed the 2015-2016 Chamber officers and directors. The mayor gave a few remarks, quipping that he would give his own award to anyone “who knows how to pronounce Outgoing Chamber board Chairman Scott Liljegren’s name,” and joking that Lexus has a new buying incentive program, “You buy a Lexus and you get dinner!”

The mayor called the past year, “One of the most exciting and enjoying years for business that I can remember.” Abed, who declared his candidacy for Board of Supervisors on Monday, said he wasn’t going to make any political pronouncements, but did direct people to his political Website.

During Liljegren’s valedictory he said that he was thankful for many things, “for the chance to serve his community in the Chamber for the last ten years. “The Chamber is you and you should never forget that. Tonight we want to honor you!”

He said he was thankful for a mayor and city council “where businesses and citizens can have personal interaction with the mayor.”

He joked that he was thankful that he had not been sitting with his back to the wall on the night that a drunken driver plowed into the Chamber office wall facing Broadway. “I know we are looking for new members but I didn’t know we wanted to put in a drive-through!”

Liljegren said was particularly thankful for CEO and executive director Rorie Johnston. “You are the brains and heart and soul and legs and all the other parts of the Chamber!” he declared.

New Chairman Alicia Reeves talked about the changes and challenges that Escondido businesses have seen since the city was founded in 1888. “In this fast-paced, constantly changing environment our members need us to be ahead of the curve.” She recognized “Rorie Johnston and my predecessor for bringing the Chamber back to relevance in the last three years.” Some of the ways the Chamber has done this, she declared was with interactive media, network building and “the only locally published full color publication, Escondido Magazine!”

She said she intended to continue these initiatives, plus new ones such as HYPE (Helping Young Professionals Engage) and the Health Care Committee of the Chamber, which recognizes the fact that health care is the largest employer in the city. Her address was greeted with a standing ovation.