Center’s 25th year will be special: an interview with the executive director 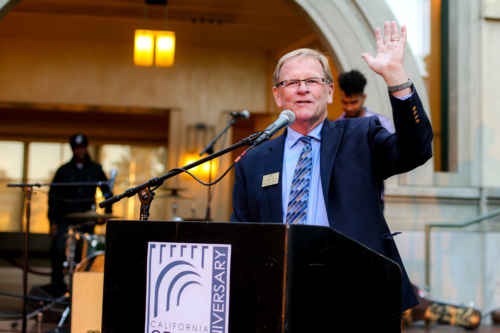 This is the beginning of a magical year at the California Center for the Arts, Escondido. The 25th year since the Center opened, and immediately leaped onto the “A” list of top performing venues in San Diego County, if not Southern California.

As I have done for several years now, last week I sat down with Executive Director Jerry Van Leeuwen (aka “the impresario”) to talk about the upcoming season, which has been announced—and some of the highlights and special events that will take place during the next year. This year joining us was Rachel Kestner, associate executive director.

Each year Van Leeuwen chairs a committee that includes the marketing director, and performing arts director go over recommendations of performers from their consultant Labadie Productions, which works with West Coast cities to produce concerts, special events and music series.

The theory Van Leeuwen has used since he became executive director (he is beginning his seventh season with the Center), which is “to catch a rising star,” continues to be a viable. The notion is that you grab artists who in five years will be filling the Sports Arena while they are still affordable.

One way to gauge success (besides that oh so gauche standard of making money) is how many shows are sold out in a season. By this standard the center is doing pretty well. During the season just ending they had 16 sell outs compared to 13 the year before.

But another indication of a growing audience is that they are also introducing a larger number of shows, including the new series at the Lyric Court and at the Great Green. They are maximizing the use of the Center without having to build new venues.

The upcoming 25th anniversary season will have a total of 42 ticketed shows and 18 Lyric Court shows and eight First Wednesday Shows, which are also free.  The free shows are picking up in popularity, said Van Leeuwen.

The new Hidden Cities Sounds have jazz jams and musical roots performances and many styles of music in between. A different genre every week. Some of these Friday evening shows include Alt-Folk—Pop, Reggae, R&B, Salsa, Smooth Jazz, Country, Hip Hop, Vintage Soul and Swing. The next two Hidden Cities shows include the Folk group Bettman & Halpin on July 12 and Roann Ro Mesina’s Synergy’s R&B and Soul music on July 19.

The shows at the Lyric Court are free, but they do make money for the Center from the vendors that are parked there before the show. This gives the shows the air of mini-festivals and covers most of the costs. People are encouraged to bring lawn chairs and sit and enjoy the shows, or even dance to them! The Center also sells VIP packages where you get nice seating and are served a meal.

The Great Green Shows are fenced in and tickets are sold. Of course, you can always cheat and listen to the shows without paying. But that would be wrong!

I asked Van Leeuwen what some of his favorite upcoming shows are. “The Zeppo Family Circus, which will be in Escondido for several nights in September, has been around several decades,” he said. “It’s not your typical show. They will set up a tent on the lawn. There is a theatrical production within the show about a person finding his place in the circus.”

The show has been a hit for many years in Redwood City, California. “We are hoping to have that same experience. Trying something that we hope will return yearly. It’s very family oriented. I’m excited about it,” said Van Leeuwen.

Another circus-like show is Cirque Holiday, which is a holiday-themed show similar to Cirque du Soleil.

The appearance of film legend Sophia Loren in the Center November 24 at the Concert Hall, is one of the few offerings that can accurately be described as “once in a lifetime.” What will this film goddess of the 1950s and 60s who has entranced audiences for decades do when she appears? Does it matter?

Another “once” of a different sort will be the May 7, showing of Napoleon Dynamite, a conversation with Jon Heder, Efren Ramirez and Jon Gries. Which includes a screening of the cult favorite and a discussion involving the actors.

Returning by popular demand this year will be the 15-time Grammy winner David Foster on  January 27. The wildly popular Pink Martini’s cosmopolitan yet unpretentious music will return March 11.

Bollywood Boulevard is something completely different. This show on April 15, “Is something that we’ve never done before,” says Van Leeuwen. It’s a capsule history of Indian cinema and a “revealing immersion in cinematic cross-pollination,” according to the New York Times. Also completely different is the October 30 show OK GO, which is billed as a “Live Video Tour.” The group recreates music videos live on stage.

Another unique offering Van Leeuwen enjoyed while visiting New York City and determined to bring to Escondido is Taimane, a Hawaiian “ukulele ninja,” that is hard to put in a musical genre box. “She plays ukulele from classical to contemporary and she is phenomenal,” he said.  That show is scheduled for October 19.

If you’ve been hungering for some true opera sounds, your craving will be fulfilled May 21 when Renee Fleming the great American soprano appears at the Center.

For true art lovers, the most exciting event of the year will undoubtedly be “Edgar Degas: The private impressionist, works on paper by the artist and his circle.” The “circle” includes Mary Cassatt, Paul Cezanne, Edouard Manet, Camille Pissaro, Henri de Toulouse-Lautrec and more. “Degas” runs from July 20-September 15.

“It’s wonderful that this show is happening in the Center’s twenty-fifth year,” said Van Leeuwen.

Kestner added, “It’s a year when we are trying to raise the bar and donors both corporate and individuals have been coming through.”

In October the Center will celebrate the big milestone, the actual 25th anniversary of the opening. This will be celebrated October 5-December 2019 with XXV: The Silver Anniversary Exhibition when selections from the museum’s permanent collection will be on view. It also includes ephemera (collectible memorabilia, usually written or printed—that was originally expected to have a limited lifetime.)

On October 6 the Center will welcome Grandmaster Flash, an American Hip-Hop star considered to be one of the pioneers of hip-hop DJ-ing, including cutting, scratching and mixing.

“This is not our typical artist,” concedes Van Leeuwen. “We do a lot of music appreciation. This is a way of introducing the Center to a younger demographic. That’s the purpose of it, to get people of that age group to try out the Center. This is in line with what we do.”

Grandmaster Flash will conduct a master class in hip-hop in the theater and he will do a show on the lawn. This low cost event will be appropriate for families and will include local talent doing break dancing and beat boxing (using the mouth to create music.)

September 16 a fund raiser called Au Vous Degas will be held at the museum. This event will cost $125 and will include French cuisine and even a mime.

Van Leeuwen is always interested in hearing feedback from the Center’s patrons. You can reach him at jvanleeuwen@artscenter.org.

One response to “Center’s 25th year will be special: an interview with the executive director”