Center to host Big Head Todd and the Monsters Sept. 2 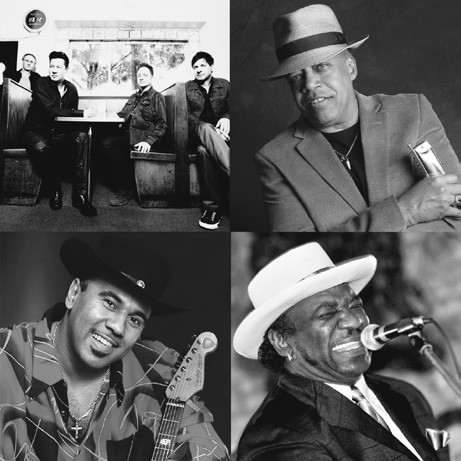 The California Center for the Arts, Escondido will host platinum-selling artists, Big Head Todd and the Monsters, as they join forces with three second generation blues stars on Thursday, September 29, for a special presentation of Big Head Blues Club Featuring Big Head Todd & The Monsters With Mud Morganfield, Billy Branch, and Ronnie Baker Brooks Presents: The Songs of Willie Dixon.

This evening of music will feature a stellar lineup of seasoned musicians, who will play in honor of one of the pillars of modern blues and an influential songwriter of early rock ‘n’ roll. Willie Dixon’s street-tough lyrics and ribald riffs have influenced the music of Muddy Waters, Bo Diddley, Led Zeppelin, Jimi Hendrix, and The Rolling Stones.

Since high school, Big Head Todd and the Monsters have been big fans of the blues. In 1997, they recorded the song “Boom Boom” with John Lee Hooker for their album, Beautiful World. It wasn’t until 2011 that the band fully delved into the blues world with their project, 100 Years of Robert Johnson, which features guest appearances by B.B. King, Hubert Sumlin, Charlie Musselwhite, Honeyboy Edwards and more. To most music fans, Big Head Todd and the Monsters are widely known for their platinum-selling album, Sister Sweetly, which includes the hit songs, “Bittersweet” and “Broken Hearted Savior.”

Big Head Blues Club features a “who’s who” on the blues scene. As the eldest son of Muddy Waters, Mud Morganfield has been around the globe, taking blues festivals by storm. He recently released an album featuring the Fabulous Thunderbirds’ front man, Kim Wilson. Billy Branch is a three-time GRAMMY Award nominee and played the harmonica in Willie Dixon’s Chicago Blues All-Stars band. Ronnie Baker Brooks is the son of Chicago blues master Lonnie Brooks whose headlined the 2013 Chicago Blues Festival and performed at the Notodden Blues Festival in Norway.

Big Head Blues Club comes armed with their own original blues material as well as the playlist of “The Songs of Willie Dixon.”