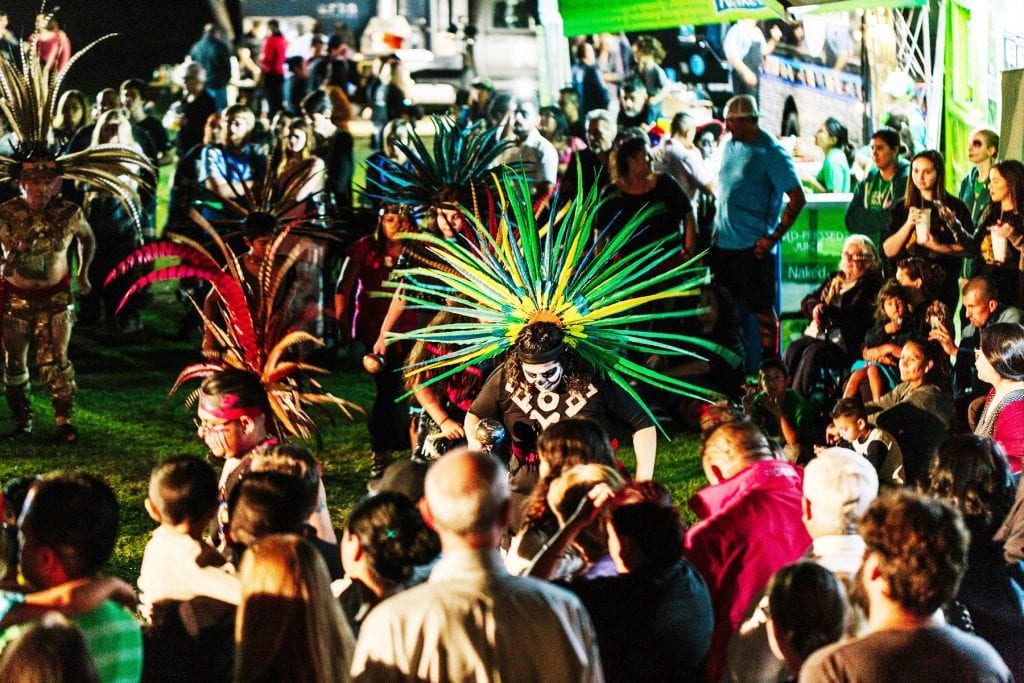 North County’s biggest Día de los Muertos Festival gets even bigger as it spans almost the entire California Center for the Arts campus, and moves from one day to four days beginning November 1 and going through November 4.

As always on November 1, attendees will be able to create altars to remember lost loved ones in a special area outside the Center’s Museum created by artist Eloy Tarcisio.

The Center will also have face painting, sugar skull making, arts and crafts, and more.

This free event will also include a traditional blessing by Calpulli Omeyocan, ballet folklórico by Tierra Caliente Academy of Arts, live music, handmade vendors curated by The Movement, and a variety of food trucks to enjoy.

Produced in association with Crescentera and supported by the David T. & Dorris E Staples Foundation.

On November 2, The Center is teaming up with local brand The Movement to bring back Cultura Fest: Noche de Muertos, which is a free event that will feature over 40 Latinx artists and vendors on the Lyric Court & the Great Green.

In addition to vendors, the event will include a beer garden sponsored by Aztec Brewing Company and performances by Calpulli Omeyocan, DJ Mixter Maize, and more.

The night will conclude with a special performance in the Center’s Concert Hall with Tributo a la Reina, un Homenaje a Celia Cruz.

Tickets to Tributo a la Reina, un Homenaje a Celia Cruz are $20-$40 and can be purchased here: artcenter.org/event/tributo-a-la-reina/

Produced in association with The Movement.

On November 3, the Center will offer Intimate Classics: Orquestra de Baja California at 3 p.m. in the Center Theater.

Led by music director Maestro Armando Pesqueira, Orquesta de Baja California (OBC) is recognized as one of the most prestigious orchestras in northwestern Mexico.

Founded in 1990, OBC is recognized as an ensemble of soloists who dominate from Baroque music to popular genres of our time.

Orquesta de Baja California brings various combinations and styles ranging from chamber music to symphonic compositions. The repertoire of this ensemble of virtuosos includes the works of Latin American composers and contemporary music from various regions.

Tickets for Intimate Classics: Orquestra de Baja California are $30-$65 and can be purchased here: artcenter.org/event/intimate-classics-orquesta-de-baja-california/

Flor Sin Raíz, written by Patrick Johansson K. and directed by Soledad Escobedo, tells the story of Xochitl, a marigold flower who longs to be free to travel the world. Her dream becomes reality, and she embarks on a magical, mysterious journey.

A pre-Hispanic folk tale originally written in Nahuatl, our version will be performed completely in Spanish.

The production will include live music by Ritmos de Tiempo.

The Center will kick-off our Ecolife Conservaion lecture series with the Roar of the Monarch Butterfly.

The monarch butterfly is the world’s most recognizable butterfly with a unique life history. Sadly, the population is in a catastrophic decline. This immersive introduction to the world of butterflies will bring you into their story in an intimate way and outline clear ways that you can participate in the recovery of the population.

Produced in association with EcoLife Conservation.