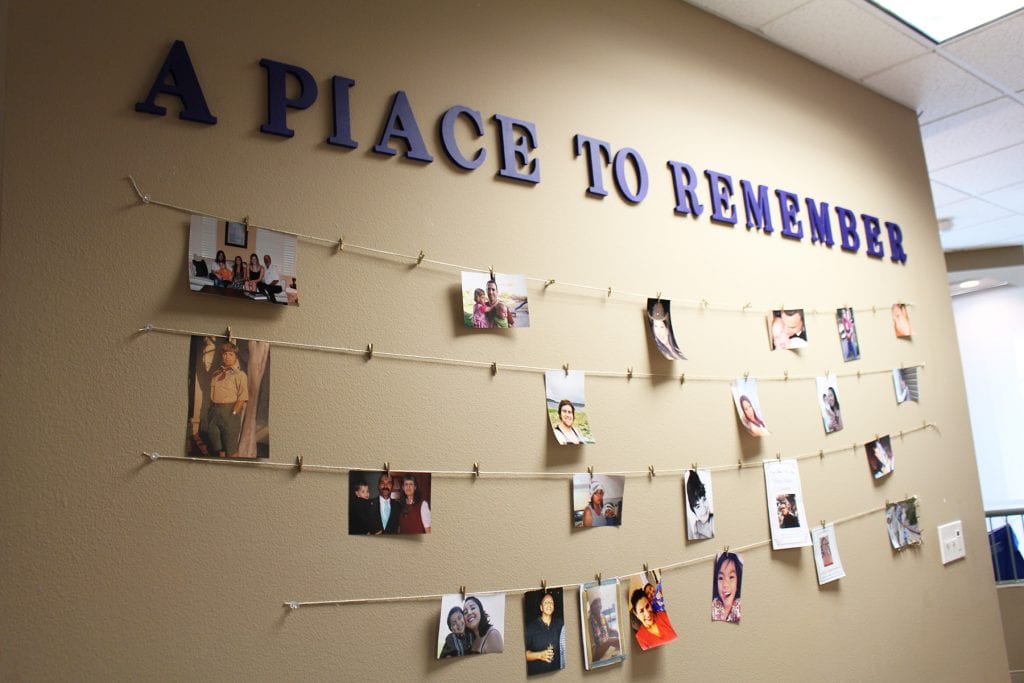 The Memory Wall, where loved ones are honored.

A little boy who lost his mother visits a place, the “Volcano Room” where the walls and floors and everything contained within it are padded.  Every time he visits, he hits the wall repeatedly, relentlessly.

One day someone asks: “Why do you hit the wall?”

“I just miss my mom so much!” he wails and, for the first time, breaks down and sobs for a long time. It is as if a dam has burst in his heart.  The pain will never go away entirely, but he has begun the process of coming to terms with it in a healthy way.

Welcome to the Children’s Bereavement Center,  where children can receive grief counseling services at no cost to their parents.  The Escondido Center opened in January.  It offers peer support programs and family support programs.

Grief comes in many forms. Recently Great Britain’s Prince Harry confessed how much hurt he endured from not being able to come to terms over the death of his mother, Princess Diana, until he was in his 30s. He told The Telegraph: “I can safely say that losing my mum at the age of 12 and therefore shutting down all of my emotions for the last 20 years has had a quite serious effect on not only my personal life but also my work as well.” He finally sought professional help at age 28.

That admission opened the floodgates to many other adults who opened up about their own experiences, and how they had wounded them inside.

A little known medical fact is that grief actually changes a body’s chemistry. Grieving children are considered to be one of the most vulnerable populations.

Melissa Lunardini, MA, children’s bereavement manager at the Center, says there is no time limit to obtaining treatment for a loss. “You could have been 3-years-old when it happened, and it could be ten years later,” she says. “If you take care of a child’s issues early on we are shaping who they are as adults. That is a huge win for our field.”

Children who don’t get treatment often carry the weight of their grief into adulthood, where it can cause suicidal behavior, drug abuse, dropping out of school, promiscuity and harm the ability to form relationships.

Lundardini was a school teacher who switched professions when she found that she had a passion for what is a budding industry. She discovered it first as a volunteer and then as a professional. “I had never been exposed to such a raw experience before. I switched and now have been in the field for fourteen years.” 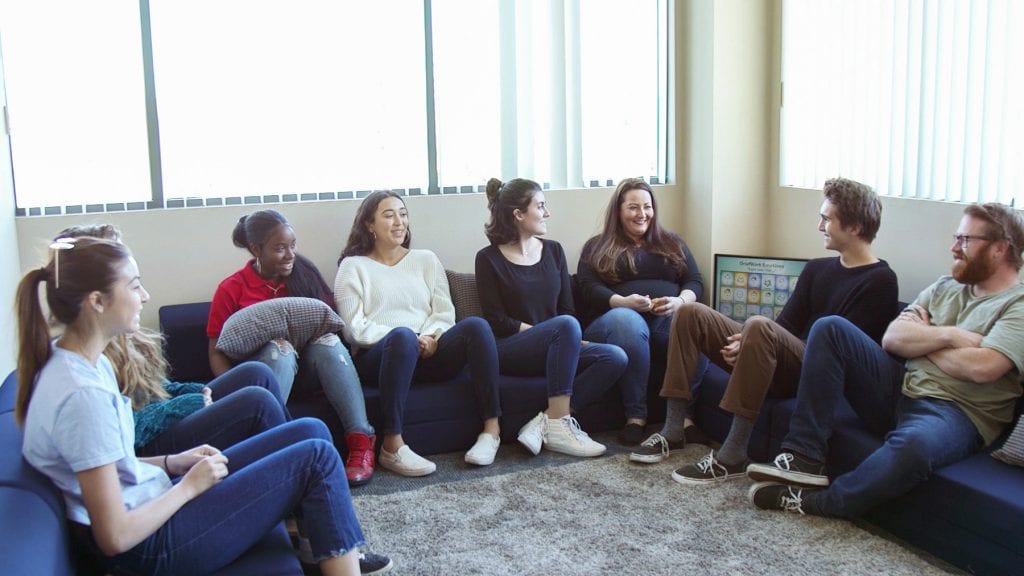 Now she often finds herself giving training in grief counseling to professionals, such as psychiatrists, therapists and social workers.

The program at the Center includes school-based support groups in 17 school districts, peer grief support groups in Mission Valley and Escondido, Camp Erin  San Diego, crisis intervention, and one-on-one counseling. They served just under 200 in the schools. In total the children’s program served about 450 within all programs. It runs concurrently to the school year, from September–May.

Children and their families come to the Center every other week for 90-minute sessions. The children are put into age-appropriate groups separate from the adult groups; who sometimes need their own support on how to raise a grieving child.

Parents might be expected to feel uncomfortable about being separated from their child, but Lunardini says, “We explain that children are best in age appropriate groups so they can learn from their peers.”

The groups include, the “littles” group, ages 3-6; elementary school group, ages 6-12; the “tween” group of ages 11-13 and the teens, 13-17. It’s not a hard and fast rule, however, and children will be assigned a group depending on their maturity and cooperating skills.

Because the program is free, families are comfortable making multiple trips. This allows for a pattern of predictability; a routine children need when they are grieving. 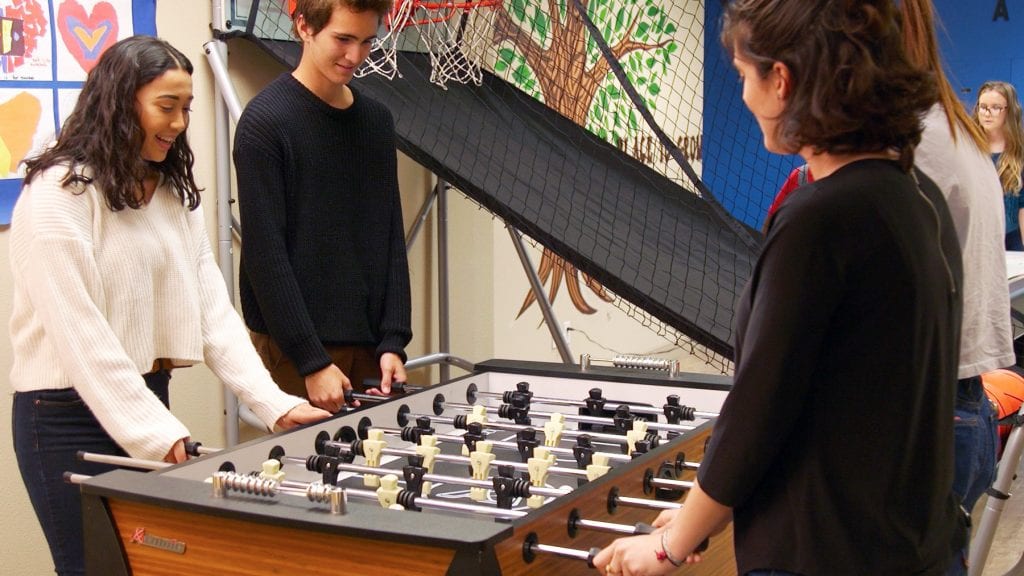 According to the Childhood Bereavement Estimation Model (CBEM) published by the Denver-based JAG Institute, “An estimated 1 out of 15 children in the U.S. will experience the death of a parent or sibling before they reach the age of 18. Over 4.8 million youth are bereaved, and the number more than doubles by age 25, to 12.7 million. Childhood bereavement is a prevalent and critical public health issue that can have a profound impact on future wellbeing.”

A cornerstone of the program is the Talking Room where a group of 8-10 children gather to talk through their grief. Each child starts by saying his or her name, then saying who died and how they died.

Dr. William Worden, who wrote “Grief Counseling and Grief Therapy,” identified four “tasks of mourning” that individuals need to go through to accept the death of a loved one. The four tasks are (a) “to accept the reality of the loss” (b) “to experience the pain or emotional aspects of the loss” (c) “to adjust to an environment in which the deceased is missing” and  (d) “to relocate the deceased person within one’s life and ﬁnd ways to memorialize that person.”

These “tasks” are different from Kubler-Ross’s stages of death and dying.

Helping children who have experienced loss to navigate these stages is the main job of the Center. “Children experience similar feelings. But grief doesn’t operate in stages. It’s messy,” says Lunardini. “It’s unpredictable. The only thing you can predict is that it’s going to be hard.”

The study of grieving and death; and the “rituals” associated with it is called thanatology. “Grief lasts as long as you live,” says Lunardini. “It’s a long-term process.”

Children can and do grieve for pets as well as siblings, parents and friends. “For children, beloved pets are no different from people,” she says. But they don’t normally provide counseling for pet deaths unless it’s in conjunction with a human death. “We serve primary loss, the death of a person,” she says.

In the Talking Room the purpose is to help kids feel safe and to encourage them to open up. This is hard because children don’t ordinarily feel good about sharing their feelings. It’s easier to do that with peers who have had similar losses.

“Some kids will say, ‘I can take my mask off’ and they can feel free to grieve,” says Lunardini. “It’s hard to do this at school where other kids don’t understand.” 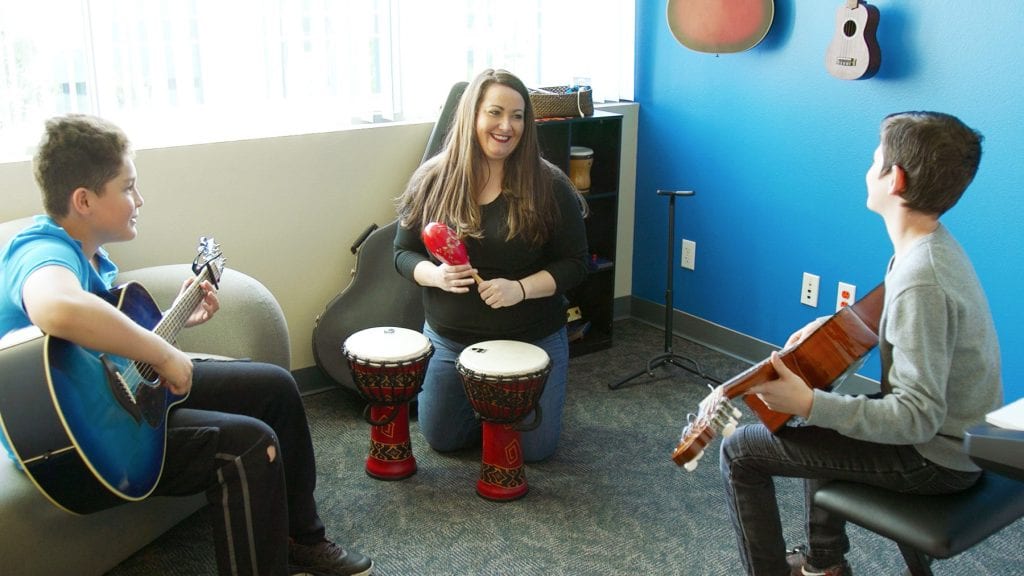 The Center teaches children coping skills for those inevitable days that are harder than others. Grief isolates its victims.  Being among other grieving children gives permission “not to be OK.”

That’s why the Game Room only contains games that can be played with others. None of them are solo games. All require socialization.

They spend half of the 90 minutes in the talking room and another 45 minutes in what they call “our sacred space.”

Children grieve through a combination of play, arts and crafts, music, role playing, writing and drawing. Music is a particularly potent form of expressing grief, says Lunardini. Perhaps your uncle taught you to play the guitar, and so you remember him by playing that instrument. “Music is a coping skill,” she says. The “Music Room” is where those kinds of feelings can be played out.

Drawing, writing and playing are the three media used the most. “Dialogue is not in the wheelhouse of most children,” says Lunardini. “Drawing it out or playing it out is very much in their wheelhouse.”

The arts and crafts room has a wide selection of pens, from Sharpies to gels, colors, types of paper. A mural on one wall was painted by a talented 16-year-old whose friend committed suicide.

“The Hospital Room,” recreates a place where many children saw loved ones die. A child whose mother died of cancer might associate hospitals with “killing” his mother. Obviously such a place can be intimidating, with its daunting multisyllabic terminology, masks and oxygen tanks. So the “Hospital Room” is not a completely realistic reproduction, but just a suggestion of the place. It has stethoscopes, gowns and a bed. 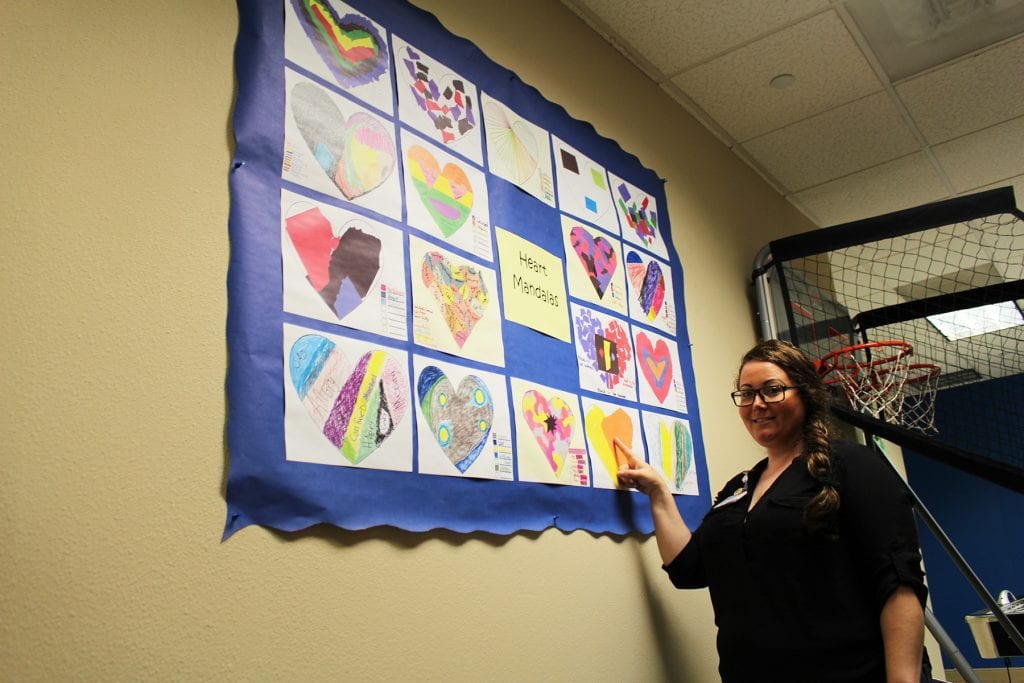 It lends itself to, of all things, playing doctor or role playing. Sometimes children will recreate a bad time, perhaps trying to give it a different ending, in a real life version of Bill Murray’s character in “Groundhog Day.” A child who felt guilty about something to do with the loved one’s death might discover that she really wasn’t at fault—or conversely come to accept her role.  In one instance a boy re-lived the accident where his brother died, only in this instance he was able to “save” him.

“We have activities that help process emotions such as guilt or regret,” says Lunardini. “We help teach them ways to let it go—when they are ready.”  Later on the same little boy who in one role playing game “saved” his brother, was eventually able to accept that he couldn’t have saved him.  But he did it when he was ready.

Role-playing is where trained volunteers can help guide the child. The children are never alone. There’s always an adult within easy reach. But they are adults who are training in dealing with grief.

“Adults want to take the pain away but that doesn’t help,” says Lunardini. “You have to teach children how to work through big emotions. Let them know that every feeling is OK to have.”

The Elizabeth Hospice has always served bereaved children, but in the last four years it has expanded its services “exponentially,” says Lunardini, going into 17 school districts in San Diego County and Southern Riverside.

Every summer the Center operates Camp Erin, a three-day camp in the San Bernardino Mountain Range for about 120 children. It is open to any child in the community between the ages of 6-17.

The Children’s Bereavement Center is funded entirely by grants and donations. It does not get government funding. It is also supported by a great corps of 50-60 volunteers.

The Escondido Children’s Bereavement Center is located at 930 Canterbury Place (across the Street from Mercedes Benz of Escondido.)  There is also a Center located in Mission Valley 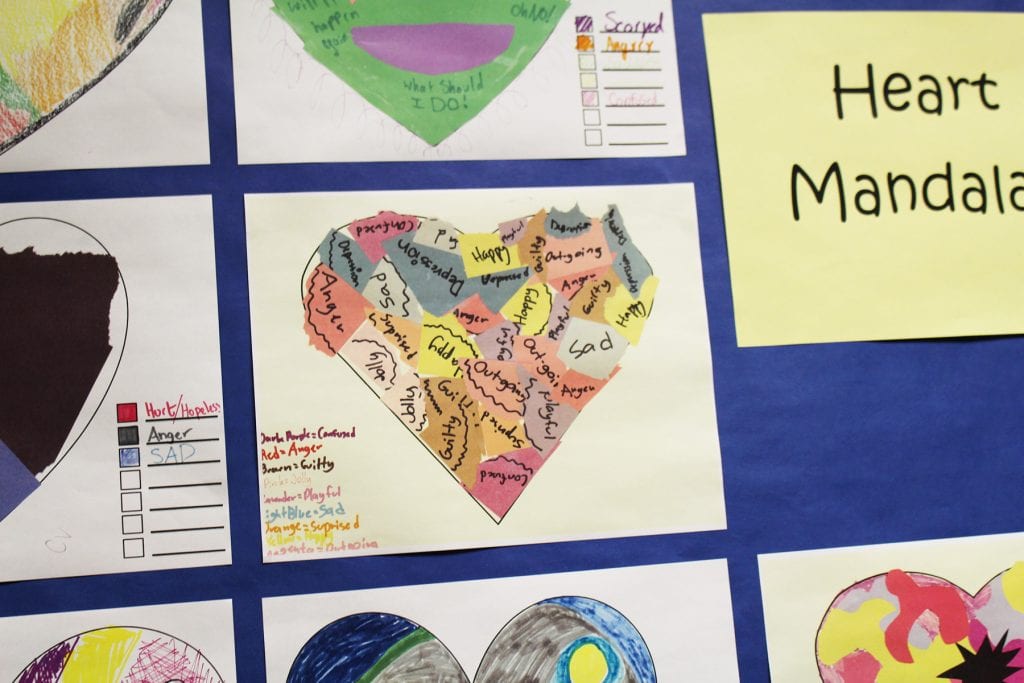 On Heart Mandalas children put down the many emotions they feel when they think about their loved one.