Neville Page signs prints of one of his works for admirers after Sunday’s lecture that he gave at the Center.

For several years the California Center of the Arts, Escondido has got­ten in tune with pop cul­ture by holding exhibits in the art museum to co­incide with that grand celebration of pop art: Comicon, which opens this week in downtown San Diego.

Sunday the Center hosted “Neville Page’s Creative Process,” to co­incide with two exhibits, “My Hero! Contemporary Art & Superhero Action,” “Unlocking Wonderland: The Exhibit,” a collec­tion exploring the fantasy and whimsy of Lewis Carroll’s classic work, which includes a piece from Page entitled “Black Rabbit,” and finally “The En­tertaining Art of Neville Page.” All are at the Center until August 14.

The 52-year-old Page is described as a “creature and concept designer” by one publication and by another as a “creature guru” but fans of mov­ies such as “Avatar,” “Prometheus,” “Watchmen,” “TRON: Legacy,” “Cloverfield” and the new “Star Trek” movies will know him as the artistic genius who created some of the creepi­est, scariest and most fascinating aliens we have seen on the Silver Screen. He creates some of the sickest, most twist­ed aliens this side of H.R. Giger. 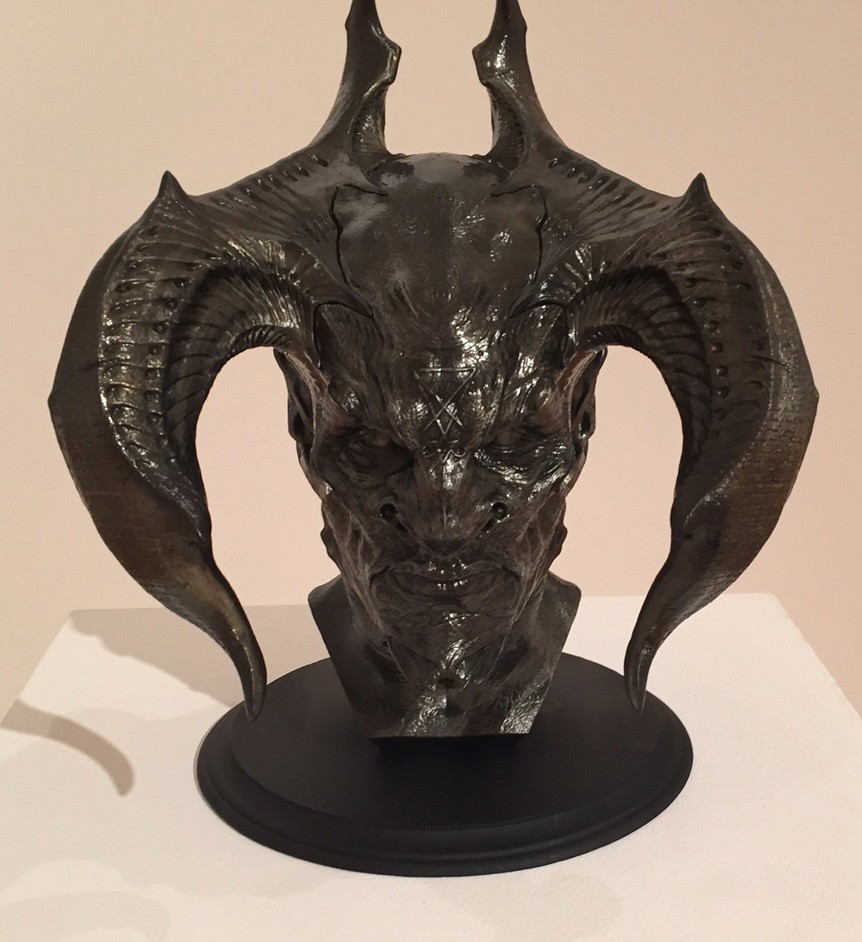 the creative process for creating this demonic mask for possible use in a project called “Purgatory” (check fu­ture TV listings.)

includes rare concept sketches, maquettes (which is a sculptor’s small preliminary model or sketch), 3D-printed models, and prints on canvas of characters and costumes. All are from the last decade of Page’s career, when he rocketed to renown in the cinematic world for his work on blockbuster films and TV shows, in­cluding the popular SyFy Network’s “Face Off,” where he is a judge. On that show Page’s face, along with his work, have become more familiar to the average viewer.

The “Wonderland” exhibit includes Page’s “Black Rabbit,” a piece in which Page endeavors to raise aware­ness for the Global Medical Relief Fund (GMRF) which aids children around the world who are missing or have lost the use of limbs or eyes; have been severely burned, injured due to war, natural disaster, or illness.

At the beginning of his two-hour talk Page showed a short video about GMRF and talked about a group of children in Africa who are afflicted with albinism, which makes them white-skinned in a largely black population. It also makes them prey to shamans and other de­spicable entrepreneurs who prize and steal 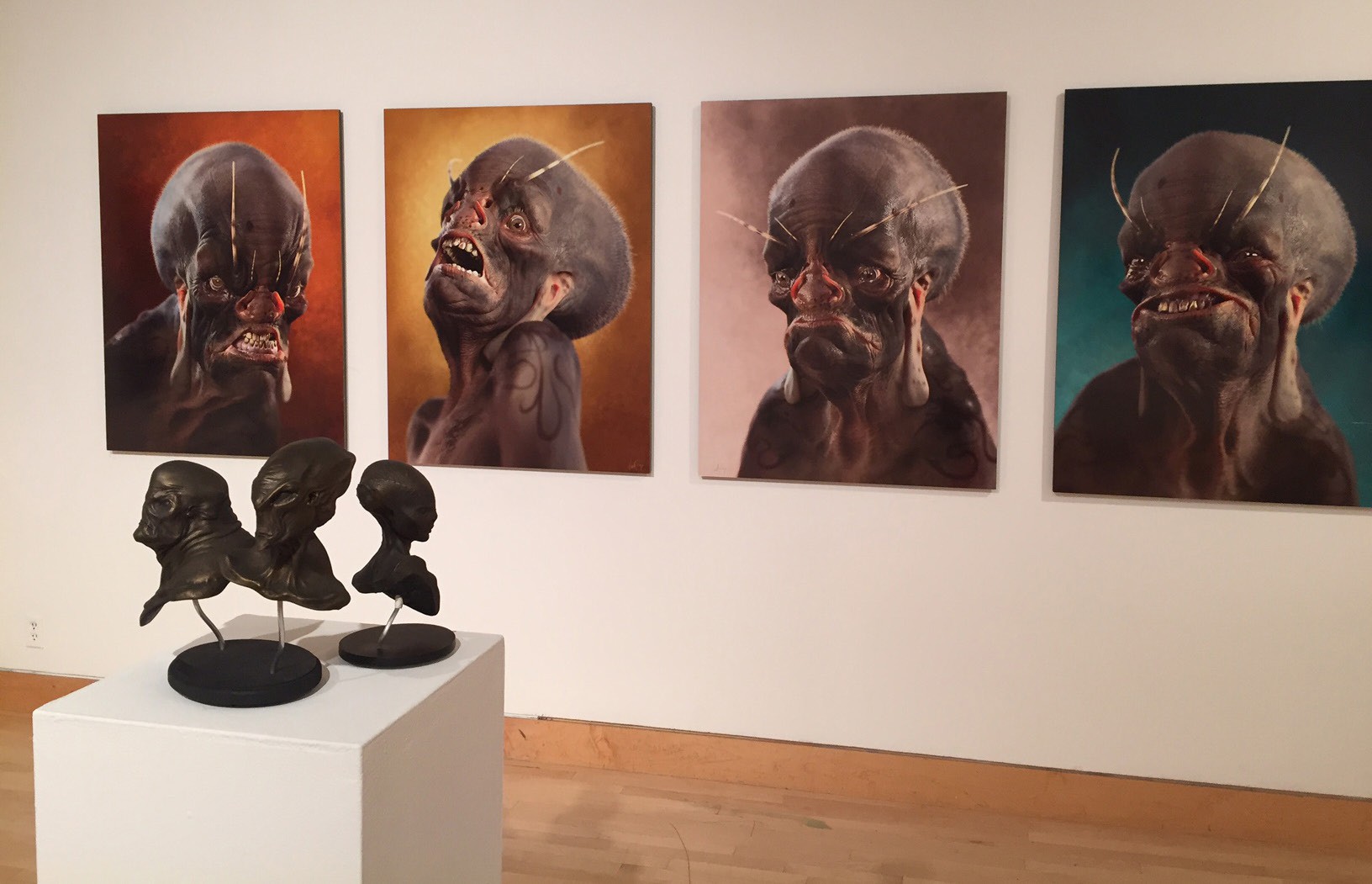 Neville Page greatly admires the way that Leonardo Da Vinci looked at the world, taking in every detail of all of his experiences through all of his senses. This study of an alien face, the various forms of expression, suggests similar studies by the greatest mind of the Renaissance.

their limbs because they believe they give the owners magical powers. Page has made it his personal crusade to raise awareness about this particu­lar evil and works with GMRF to raise funds to help give such children— and others who have been disfigured by bombs, fires and other accidents— an­other chance at a normal life by provid­ing them with artificial limbs.

Page was of an artistic bent from an early age. In a home movie taken when he was 5 he is shown in a full suit of “armor” that he crafted out of cardboard. He was always a very popular boy when Halloween came around. His creations became more so­phisticated the older he became. As a young adult he didn’t go immediately into “creature” creations but instead entered the relative mundane world of creating medical prosthetics. He also dabbled in acting in soap operas.

It was only later in life that Page be­gan to do what he is now famous for, creating bizarre creatures in consulta­tion with movie directors who need them to populate their cinematic uni­verses.

During his lecture, Page gave what almost amounted to 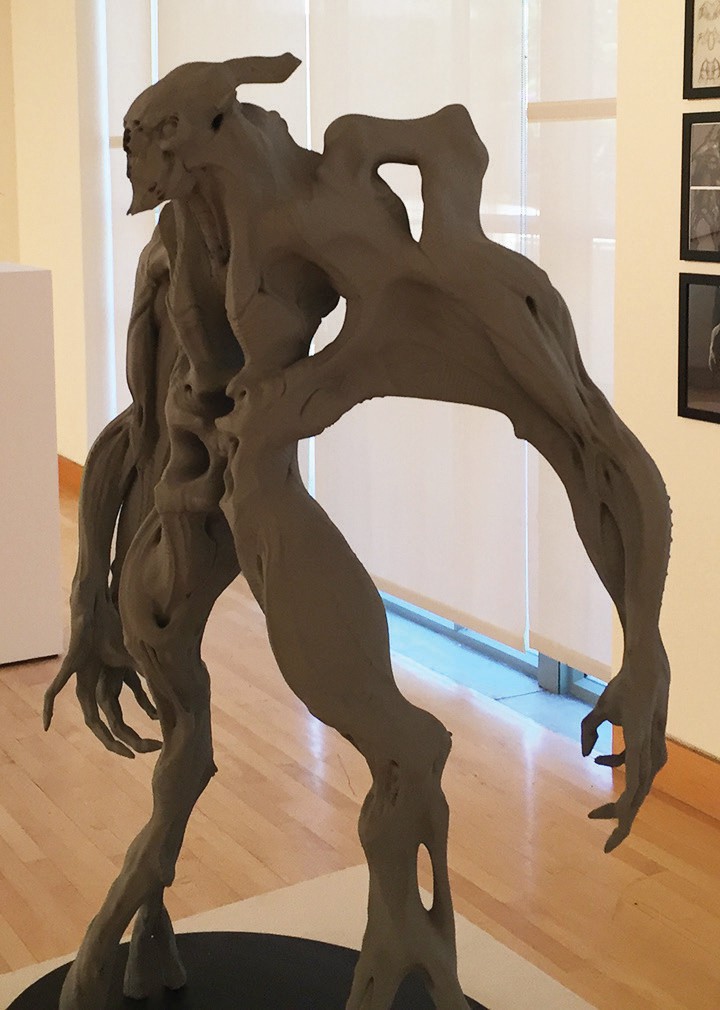 Another of Page’s creatures.

a master class in the creation of an alien life form, start­ing from the conception, to ways of experimenting with different effects. Any artists in the audience were smart if they were furiously scribbling as Page’s presentation bubbled with cre­ative tips for using programs such as Zbrush and Modo.

In his opinion, it is impossible to create something that is completely alien to our sensibilities, because then we won’t have any point of reference and it won’t look like anything to us. Even with the most alien of creatures it is necessary to combine familiar ele­ments, he says.

In one video Page showed the cre­ative process for creating a demonic mask for possible use in a project called “Purgatory.” The mask was made for his face. The resulting model is on display in the exhibit.

Besides making his creative genius available to populate the blockbuster films of Hollywood, Page is an instruc­tor at the Gnomon School of Visual Effects in Hollywood, the Art Center College of Design, in Pasadena.

At the end of the presentation a drawing was held for two of Page’s artworks, and later in the lobby he an­swered questions and signed prints.