Celebrating the art of Frida Kahlo 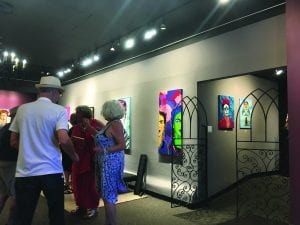 On July 6, 1907, the world of art was graced with the birth of Frida Kahlo. At the age of six, Frida was diagnosed with polio which made her right leg shorter and thinner than her left leg. On September 17, 1925 Frida was involved in a terrible bus accident which caused many health issues.

Throughout her life, she documented her pain through art. Despite her illnesses, Frida has become a celebrated iconic female figure. Her art has become influential throughout cultural diversity of southern California.

Today, ChimMaya art gallery in Los Angeles is celebrating Frida Kahlo’s 110th birthday. Artists from as far as Virginia, Illinois and Mexico are taking part in this event.

We followed local artist and columnist Armando Padilla to the opening reception.

“Frida was that one artist that my grandmother Deila talked about a lot when I was growing up,” he said. “When I stared at her art, I saw stories within stories. Just totally mesmerized.”

Arriving to the event on Beverly Boulevard, the atmosphere feels crowded and lively. Compared to other art events, it is difficult to find parking. Between the opening and closing of the entrance doors, you can hear the invitingly joyous sounds of Salsa music. Inside, it is crowded with Frida fans admiring the art, jewelry, furniture and accessories on display.

Located in the front room on the right wall Padilla explains his piece “Joyas de Frida.” 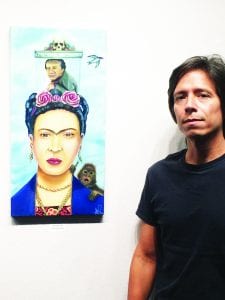 “My aim was to take on a different approach to the art and get totally poetic,” says Padilla. “I just didn’t want to do a portrait but really go into the essence of what Frida might have been thinking and for some reason, the idea of cages kept clouding my mind so that’s how the idea of the clouds as a background also came into play.”

He adds, “From there, I came up with the theme of the ‘Illusion of Entrapment’ which summarizes an artist’s mind because, in my mind, you can’t be trapped because there is no end but to end itself. The artist Diego Rivera sits trapped atop her head but the idea was to bring into question which one of them was actually trapped – or were they to begin with?”

We notice that the monkey and bird are present in his other piece “Frida’s Chango Loco.”

“The bird is a tip of the hat to the sparrow that was present on some of Frida’s art,” says Padilla. “It ended up representing freedom of the mind. The monkey meanwhile, plays with the mind. I wanted the monkey to play a significant role in the pieces as opposed to just being an accessory to them. In many ways, the roles are reversed where Frida is the accessory with which the monkey interacts.”

Were there were any challenges creating two stylistically different pieces?

“Kind of. The idea was to create two pieces from the same artist as if two different artists did them. One was more traditional (portrait-wise) whereas the other is more doll-like. At first, I tried playing it off as if I were two completely different artists but didn’t really have to go there mentally. It’s no different than say, playing jazz guitar—then abruptly switching to hard rock. Same tools, different approach,” he said.

Throughout the exhibit, Padilla could be seen talking with people, explaining his art and taking photos. Meanwhile, we walked around to explore some of the other pieces. Among our favorites are “The Courtship” by Otto ‘Tito’ Sturcke, “Frida” by Jonathan Stephen Harris and “Frida – China Poblana” by Efrain Becerra Castaneda.

Each piece of art was chosen by CEO/Creative Director Steven Acevedo. For this event, it was highly suggested if not required for the artists to “think outside the box.” The warm and welcoming family-like mannerisms of Acevedo and his staff help to make customers feel at ease. At a glance, the atmosphere of ChimMaya’s celebration of Frida is respectful yet festive. Despite at times, the shoulder to shoulder crowd, everyone is friendly and polite. 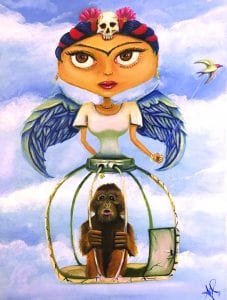 “Yes, of course painting is a business,” Padilla explains. “But I tend to forget about that when I paint and I’m sure other artists do as well. If I’m doing a Frida … especially Frida, then it has to be unique otherwise it’s not coming from the heart. There has to be a story to tell the people and speaking with the people is my favorite part of these events.”

As we are about to leave the event, the second room abruptly turns into a dance party. It is the perfect ending to Frida’s 110-year birthday anniversary. Don’t worry, the party isn’t over yet. The exhibit runs through August 23.