CCHS girls are ready to prove themselves on the court 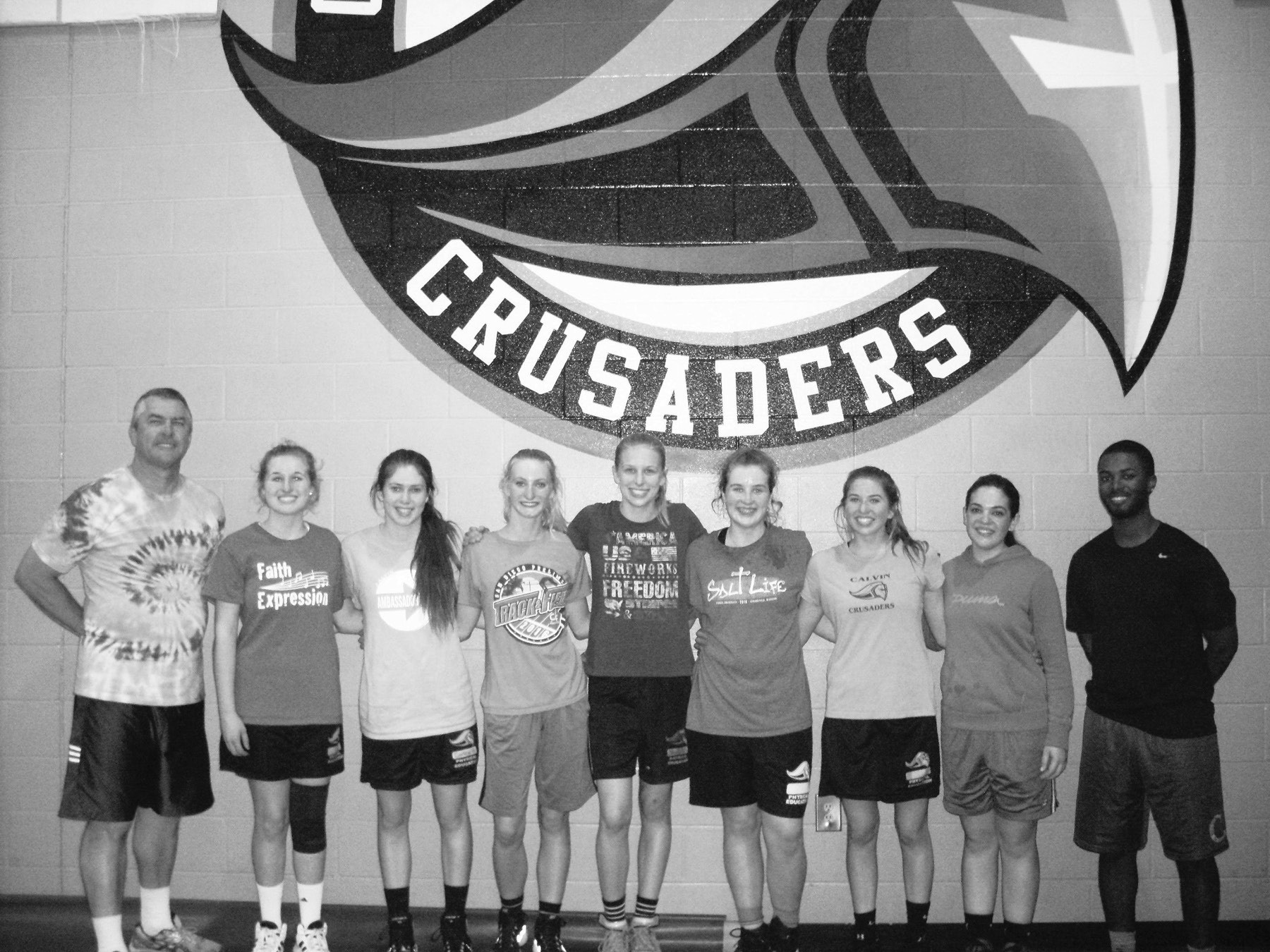 Since deciding to form this team together, these Crusaders have continued to improve their skills as well as their relationships with one another.

It’s all about enjoying the game for Calvin Christian’s Girls Basketball team. With a brand new team and limited previous experience, these girls have put in the hours and proven their dedication.

While their league record remains a nail biter for fans, their overall win loss of 14-8 is something to celebrate. Team captain, Carley Hedges explains that there was “barely a team” this year and the girls “convinced each other to play.” In her opinion, this has given them an advantage, as they are “more relaxed” since they “didn’t have huge expectations.” They are able to focus on enjoying the game and growing as a team, rather than stressing about beating last year’s rivals or improving personal stats.

While this may seem to imply a nonchalant attitude, these girls prove their athleticism in the team’s overall successes. They have begun to make a name for themselves, becoming formidable competition even in a sport that is new to them as a group.

Since deciding to form this team together, these Crusaders have continued to improve their skills as well as their relationships with one another. Coach Bill Stout describes the season so far as “outstanding on two levels: the girls getting better in their basketball skills and in coming together as a team — being good teammates.”

They function successfully as a unit, without any one player attempting to dominate the court. Stout describes this as the team’s greatest strength: “It’s not a one person team; they don’t rely on one player.” Hedges agrees, expressing that they “play as a team, there’s no ball hog.”

Discussing their abilities on the court, Hedges says they “pass a lot” and remain “balanced in player stats.” This united atmosphere has aided in the creation of a team with positive attitudes and shared goals. “It’s super fun,” she smiles, “there’s no drama and we’re just out here for fun.” While their talents in the game continue to improve, Stout hopes to also see an increase in strategic plays.

“We’re always trying to raise our basketball IQ,” he reveals. “In addition to improving our skills we’re always trying to play the game smarter.” Most of the girls play at least one other sport, and basketball isn’t “anyone’s main sport,” according to Hedges. With their combined athleticism and desire to form a team with friends, strategy is the only thing left to perfect.

Their “cohesiveness, sisterhood, and team mentality” are already firmly established in Stout’s mind. “We’re in a pretty good league and had a good start but the league is stronger than we had expected,” he explains. With a brand new team, the stats they have overall are impressive, but in their league they seem to be right on the edge. “It’s good though, because it forces us to get better and to work harder,” says Stout. The girls have mastered their teamwork and play the game with precision and determination. “We just want to get better every game,” he adds.

Although this is his first year coaching girls, Stout finds it “an absolute joy.” Previously, he had close to thirteen years of experience as a boys’ Varsity basketball coach and has been an employee at Calvin Christian for the entirety of his career. Now working as the school’s Athletic Director, he has filled in for various coaching positions over the years. This season, however, is his first time as the girl’s head basketball coach. It has quickly become “a highlight of the year.”

“It is something I look forward to everyday,” he says. For him, coaching is about encouraging athletes to perform to the best of their abilities. He is especially encouraged when students demonstrate a desire to set specific goals and then remain dedicated until they are able to achieve their goals. “It is always rewarding to see kids want to improve and then to see that change,” he says.

Whether or not they are completely successful in their goals, Stout is proud when his students simply try, knowing they are learning something new and advancing their skills. He finds that sports give students learning opportunities that they cannot find elsewhere. “Especially at a Christian school, sports are a unique way for students to live out and learn about their faith,” he says. He has observed that the athletes he has worked with are able to learn more about themselves and each other when there is a bad call made or an opposing player becomes overtly cruel. “It helps teach how to deal with different situations,” he says.

In addition to these life lessons, the young Crusaders are exhibiting impressive success in their teamwork and talents. Their opponents can consistently expect a difficult battle. “We always try to start fast,” says Stout, detailing their mindset going into games.

Their home game against Maranatha Christian on Friday will certainly be a tough match, but these girls will fight hard to maintain their current record. You can expect to see them running the other team around the court with their effortless passing and confident attitudes. There is no doubt that they will use it as an opportunity to showcase their growth as a team.