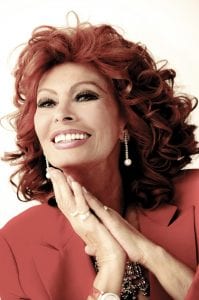 Legendary actress Sophia Loren will appear at the Center November 24.

The Center’s XXV Anniversary Season debuts on Thursday, July 18 with first-ever outdoor concert in our Great Green and continues until Thursday, May 21, 2020.

Events will take place in the 1,523-seat Concert Hall and 404-seat Center Theater.  New this season, events will also take place outdoors in the 3,500-seat Great Green and 388-seat Lyric Court.  Please see the 2019-20 performance schedule below, and for additional information about the Center, visit artcenter.org.

The Center’s Executive Director Jerry Van Leeuwen told The Times-Advocate, “Happy Anniversary! The California Center for the Arts, Escondido is celebrating its 25th year this coming season. The anniversary season has more concerts planned than in recent years with very exciting artists, including Buddy Guy on the Great Green in August. We also have four outstanding museum exhibitions scheduled, beginning with Edgar Degas in July. I am very excited about the 25th Anniversary Year. I hope to see you often at your Center for the Arts, Escondido!”

“Our 25th Anniversary is almost here!  We’re planning an exciting and diverse lineup of new experiences and old favorites to share with you,” said Cynthia Weir, board chairman.  “Bring your family and friends to discover something new, create great memories, and celebrate 25 years of fabulous performances, visual and creative arts, and community connections here at the California Center for the Arts!”

See the comprehensive performance schedule below for the Center’s XXV Anniversary Season:

Join the Center for a concert under the stars on our Great Green, with award-winning Latin artist Natalia Lafourcade.  Natalia Lafourcade is one of the most influential emerging Latin artists in the last twenty years. Lafourcade was born in Mexico City, Mexico into a family of famed musicians and writers. She quickly began making her own music quickly found success under the tutelage of Loris Ceroni mixing pop with bossa nova, rock, and Latin rhythms.

A concert under the stars on the Great Green, with Panteon Rococo!  With a mix of Rock, Ska, Reggae, Punk, Cumbia and more Panteon Rococo has established itself as one of the most important bands of Mexican Rock.

A concert under the stars on Great Green, with these blues legends!  Buddy Guy  is forever an icon of Chicago blues. Jimmie Vaughan  dedicated his life to making sure the blues not only stays alive, but remains full of life and an inspiration to all who listen.  Charlie Musselwhite may be the only musician to get a huge ovation just for opening his briefcase. Catch these three blues icons in one night.

Sammy Miller and the Congregation

Sammy Miller and The Congregation are on a mission to put the generosity back into jazz and bring art back to the people.  They play joyful jazz – music that feels good.

Bortnick live concerts are filled with surprises and talent that dazzle audiences and fill them with a sense of wonder and awe. Audiences around the world have laughed, cried, sang, danced, and experienced some of their most exciting and memorable moments at Ethan’s shows.

The Zoppè Family Circus emerged from humble beginnings more than 160 years ago to become one of the legendary circuses in all of Europe.

A comedian, actor, and writer, Patton Oswalt continues to find success in all areas of entertainment. From his award-winning comedy specials to his many memorable film roles and guest appearances on his favorite TV shows (including Parks and Recreation, for which he received a TV Critics Choice Award), Oswalt continues to choose work that inspires him and entertains audiences.

Now is your chance to catch ukulele virtuoso, songwriter and rising star, Taimane, in fresh and full blossom as she brings her full palette of artistic color to Escondido for a one-night-only performance on October 19.

OK Go, the rock band famous for their wildly creative videos, brings their unique magic to the stage in 2018.

Producing the world’s first and #1 “Stunt Dog Show” since 1999, starring dogs that have been rescued from pounds and shelters!

Artists from across the roots musical landscape gather for a night showcasing some of our best young, contemporary talent.  Matt Andersen is a powerhouse performer with a giant soul-filled voice, blues in his bones and commanding stage presence.

An Evening with Sophia Loren

Synonymous with grace, beauty and artistry, Oscar-winning actress Sophia Loren will captivate audiences with an intimate onstage conversation and Q/A.

Mary Chapin Carpenter is a gifted singer and songwriter who began her career as a folk-influenced performer in the Washington, D.C. area, but found favor on country radio in the ’80s and ’90s, taking her emotionally intelligent songs to a mass audience. Her songs are slow-release works of craft and catharsis that become treasured, lifetime companions for their listeners.

Jazz trumpeter Etienne Charles adds a new twist to the holidays with music from his dynamic Creole Christmas album.

Broadway Director Neil Goldberg, has assembled a unique cast of incomparable cirque artists and theatrical talent to wow audiences nationwide. This critically-acclaimed extravaganza is a Broadway musical and new cirque adventure wrapped into the ultimate holiday gift for the entire family.

David Foster’s first round was as a studio musician, arranger, and recording artist. His second round was becoming one of the most successful songwriters and record producers in history. For his third round, Foster is gearing up to take on Broadway with several projects. These include writing the music for a new musical about the iconic, animated character Betty Boop, which will be directed by Tony Award-winner Jerry Mitchell.

Each year, International Guitar Night’s founder Brian Gore invites a new cast of guitar luminaries from around the world for special concert tours of North America highlighting the diversity of the acoustic guitar.  For their special Anniversary Tour, Brian has put together his most eclectic lineup yet:  Guest host Mike Dawes (England) and his two-hand contemporary style is joined by German Lopez and his sweet, high-pitched timple from the Canary Islands; electrifying jazz virtuoso Olli Soikkeli from Finland and Hawaiian Slack Key master Jim Kimo West.

WHOSE LIVE ANYWAY? is 90 minutes of hilarious improvised comedy and song all based on audience suggestions. Cast members Ryan Stiles, Greg Proops, Jeff B. Davis, and Joel Murray will leave you gasping with the very witty scenes they invent before your eyes. Audience participation is key to the show so bring your suggestions and you might be asked to join the cast onstage!

Joan Osborne has earned a reputation as one of the great voices of her generation — both a commanding, passionate performer and a frank, emotionally evocative songwriter. A multi-platinum selling recording artist and seven-time Grammy nominee, the soulful vocalist is a highly sought-after collaborator and guest performer who has performed alongside many notable artists, including Stevie Wonder, Bob Dylan, Luciano Pavarotti, Emmylou Harris, Taj Mahal, and Mavis Staples, to name a few.  Singer-songwriters Deb Talan & Steve Tannen began writing together the night they met, and soon formed indie band The Weepies.

Since the release of his 2004 critically acclaimed CD When I Fall In Love, Chris Botti has become the largest-selling American instrumental artist.  His success has crossed over to audiences usually reserved for pop music and his ongoing association with PBS has led to four #1 jazz albums, as well as multiple Gold, Platinum and Grammy Awards.

The vibrancy, emotion, and heart-pounding beat of Hindi cinema comes to the stage with Bollywood Boulevard. Dance, live music, storytelling, and stunning visuals come together to create a non-stop journey through over 100 years of Bollywood.

Blessed with “a voice of phenomenal beauty” (Stephen Holden, New York Times), Jane Monheit has had plenty of milestone moments in establishing herself as one of today’s best and most important vocalist-musicians.

The ensemble’s virtuosic performances have delighted audiences throughout Latin America, India, Russia, Canada and in more than 30 states across the US.

One of the most beloved and celebrated singers of our time, soprano Renée Fleming captivates audiences with her sumptuous voice, consummate artistry, and compelling stage presence. At a White House ceremony in 2013, President Obama awarded her the National Medal of Arts, America’s highest honor for an individual artist.

In celebration of The California Center for the Arts, Escondido’s twenty-fifth anniversary season, selections from the Museum’s permanent collection will be on view.

Explore and admire the beauty of open space through artistic depictions of Valley Center’s Hellhole Canyon.

Hidden City Sounds is a brand new summer music series will fill the Lyric Court with music every Friday from June 7 to October 4. Enjoy a different genre of live music each week along with DJ’s, food trucks, inflatables, and a cash bar.

During this family-friendly event, guests can choose from a rotating lineup of food trucks while being able to listen to free live music and play interactive games like corn hole, giant Jenga and free inflatables for the kids!

Join 20,000 patriotic festival-goers for a day of rockin’ live music, tasty treats, and Fourth of July fun and games for all. After dark, turn your gaze to the sky for a dazzling fireworks display.

Every First Wednesday of the Month, September 2019 through June 2020

(*Excluding the months of December & January)

Dance the night away to live Salsa, Norteño, Huapango, and Cumbia, under the stars in the Center’s Lyric Court. Held every Friday in September, Musica en la Plaza, brings authentic FREE live music to hundreds of attendees each night.

Every December the Center brings the North Pole to the heart of Escondido with a visit from Santa, real snow, and entertainment for the whole family to enjoy.

Camp Pendleton’s finest musicians return to the Center for their popular annual performance.

Enjoy a vibrant showcase of artwork and performances by Escondido’s students.

Get more information about the XXV Anniversary Season shows as well as purchase tickets here: artcenter.org/events/category/2019-20-presented-season/