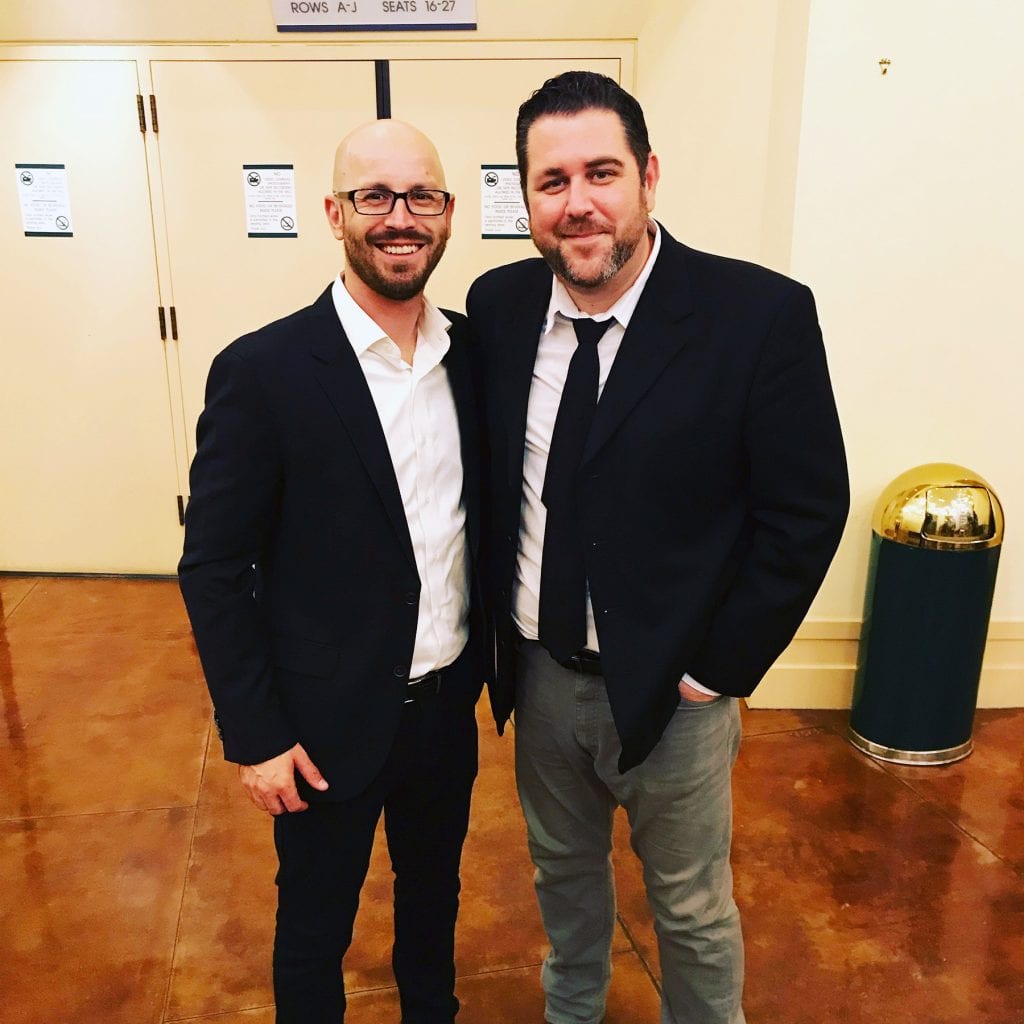 Jordan Beck, executive director (left) along with J. Scott Lapp, artistic director for The Barn Stage Company will oversee the new Center Theatrics department and help in the production of Theatrical Arts at the Center.

On the heels of the closing of the 25th Anniversary season, the California Center for the Arts, Escondido (The Center) this week announced the acquisition of The Barn Stage company, a professional theatre company  in Temecula, that produces musical theater and plays.

Jordan Beck, executive director and J. Scott Lapp, artistic director for The Barn Stage Company, will oversee the new Center Theatrics department and help in the production of Theatrical Arts at the Center.

“Having found a home in Escondido, we are thrilled to take what we started with The Barn Stage Company and continue our mission of theatrical excellence by joining the California Center for the Arts family,” said Beck.

The Center first partnered with company in the fall of 2018 with “The Best of Broadway.”  Its success led to the production of more shows including “The Best of Motown,” “The Piano Men” and “Happily After Ever.”

“We look forward to joining the team in Escondido and introducing a new Broadway caliber season of plays, musicals and special events in 2020 and beyond.” Lapp Said.

Jerry VanLeeuwen, executive director of the Center, told The Times-Advocate: “Jordan and J. Scott are so well-respected locally and in the industry. Their connections and reputation have already enhanced the programming options of the Center.” He added, “This new connection will bring events we have not even imagined yet. I cannot wait.”

The Center will be announcing the Theatrical Arts 2020-21 season by the end of the month.

The Times-Advocate spoke to Jordan Beck this week. He recalled how the partnership materialized:  “We started the Barn Stage Company in 2015 after starting with a monthly ‘Cabaret’ at the Merc in Old Town Temecula. Our goal was bringing professional theater to the area.”

Barn Stage Company was looking for a permanent home to build a thriving company. It first partnered with the California Center 18 months ago. “It’s an amazing venue and we hit it off with them,” he said.

They started with concert-like productions all on the first floor of the Truax building in Old Town Temecula, which they transformed into a black box theater. “Everything we do is theatrical,” said Beck. “We aren’t doing tribute concerts. We did do the ‘Piano Men’ show, which was dueling pianos. But our history is musical theater.”

At the Merc they did shows like the Carousel and Chess concerts, and fully staged shows, including “James and the Giant Peach,” “Little Women,” and “Peter and the Starcatcher” which won numerous awards.

At the Merc, Beck was producer and Lapp was artistic director and also directed a lot of the shows. They typically hire choreographers and musicians. Some shows call for smaller bands, while others require more musicians. They will carry this division of labor forward to the Center.

They will bring back the “Piano Men” in September. The first show by Beck and Lapp will be in October at the Main Stage. “We will be doing one show in each of the venues, one show in the Center Theater, and a more immersive theatrical production in Studio One,” which is CCAE’s black box theater. That will be an intimate theatrical experience. “We’ll also do one show in June [of 2021] in the Concert Hall,” said Beck. “That’ll be a very big show!”

They haven’t done stage shows in a couple of years. Which in part explains why they are coming to Escondido. “In Temecula we were only getting three weekends out of the year. It’s difficult to sustain a company on that,” said Beck, who added, “We’re thrilled to be working alongside the Center’s team. They have been nothing but supportive and on the same plain with us as far as their standards. It’s been a dream!”

The TA also spoke with J. Scott Lapp, who has been working in London for the past three months on the world premiere of Dreamworks’ “The Prince of Egypt!” He is associate director on that massive show, which has over 40 cast members and 100 people working backstage each night. He has been working “alongside the brilliant creative team and the writers, which include Stephen Schwartz himself,” said Lapp. “We have been workshopping the show and doing developmental productions for the past four years, and we had the opportunity to  do the full scale production in London which will run for 32 weeks! We also recently recorded the Cast Album which should be out soon!”

Recalling how the Barn Stage Company came to be, Lapp said, “Jordan and I started the Barn Stage Company together back in 2014 after a mutual theatre friend introduced us. We had started Cabaret at The Merc, which we still produce today … and then decided it was time to start a professional theatre company in Temecula! After a number of years producing shows in Old Town Temecula, we were approached by Escondido to move  our operations down to The California Center for The Arts. We both knew that this was a great opportunity to continue to build on what we started.”

Lapp added, “It’s a great opportunity to bring some of the work I do in New York and across the country as well as international work back to Escondido!  Over the years, I have forged many strong relationships with writers and producers and I am looking forward to bringing some of their original work to The Center as we build our Theatrical Season.”

Lapp grew up in San Diego, in the East County and started doing theatre when he was 5, performing with companies like CYT, CCT, Lambs Players and Starlight. “I found a love for being on stage and singing and dancing very early,” he said. “My parents and grandparents were very instrumental in those early years and I continued to perform locally until I graduated high school. It was at that point that I started to explore directing and found that working with actors and designers was so much more satisfying. I am a collaborator at heart, and I love being surrounded with people who are great at what they do! When you can bring together that kind of spirit and energy, you unlock so many possibilities in the room and it becomes something magical.”

Expect BIG musical shows from this team. Lapp said, “I grew up singing and dancing so I have always been fond of the big Musical Theatre shows! As we started the company in Temecula, we found that we needed to start out by focusing on the  smaller musical theatre shows and we did things such as “The Last 5 Years”, “Urinetown” and “Peter and The Starcatcher.” We also produced these enormous ‘one-night-only’ concert events where we would put the orchestra on stage, 32 piece orchestra and then stage a concert in and around them. We did shows such as ‘Carousel’ and “Chess” and most recently, “The Secret Garden”. I am excited to bring those types of shows down to Escondido, and pair them with plays and more intimate, immersive theatre in the smaller spaces! I have a lot of ideas for The Center and am just waiting for the race to begin!”

Asked what are his favorite kinds of shows to direct, Lapp said, “Ones where you can bring the audience into the piece, surround them with action, and make them feel the emotions and weight of the drama. I recently directed a production of “The Curious Incident of the Dog in the Night-Time” out in Michigan and it was a very rewarding experience. I am looking for the right moment to produce that important piece of theatre here in San Diego. Some of my favorite shows I have seen over the years include “Natasha, Pierre and The Great Comet of 1812,” “Ain’t Too Proud: The life and Times of the Temptations,” and then there’s the dramas, “To Kill a Mockingbird” or “The Ferryman” and the recent production of Neil Gaiman’s book “The Ocean at The End of The Lane” at the National Theatre in London.”

Lapp reemphasized the quality that Escondido audiences will experience: “Jordan and I are planning on bringing Broadway quality performances to Escondido. With such great resources at our fingertips, we believe audiences in Escondido will line up to see San Diego premieres and shows that haven’t been done around town. We might do a revival of a big Broadway show, but do it in a way that audiences haven’t seen before. We aren’t going to be a theatre company that does another production of “Annie” or “Shrek.” Those companies already exist. We want to be on the forefront of bringing exciting new theatre to North County.”

Escondido audiences will also see original and local works. “Maybe not in the first season or two, as we get the foundation laid for the future,” said Lapp. “but yes, our plan has always included producing new and exciting work that will then go on to be produced elsewhere in the country. We are looking forward to collaborating with the partnerships we have built in San Diego and those that have yet to come.”

He concluded, “As an artistic director, it is very important to me to engage the local audiences and writers and give them reason to come and sit in our theatre for a couple of hours. I want to tell stories that they are interested in and ones that ultimately will help transform the way people think. I love Directing shows that make people talk. That gives them a reason to go to a local restaurant and have a conversation about what they just saw!”