Catholic university raises the level of the downtown 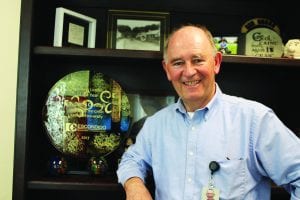 Dr. Derry Connolly stands next to the Business Leader of the Year award from the Escondido Chamber of Commerce.

A few weeks ago, Dr. Derry Connolly president of John Paul the Great Catholic University, accepted the award as Business Leader of the Year from the Escondido Chamber of Commerce. The award was the Chamber’s way of recognizing the impact the university has had on Grand Avenue and the downtown in the four years since it located there.

The Catholic creative arts university arrived in May 2013 with 150 students. Today it has 320 with a steady growth rate of 15-20% a year. “Most businesses would like that growth rate,” said Dr. Connolly.  It’s a far cry from ten years ago, when the university started with 30 students and no campus.

“The city has welcomed us with open arms. And the people of Escondido and the businesses, are all great,” he said.

The polite young students, strolling along Grade Avenue, dropping in on the many places to eat and shop, are a benign presence that add to the overall quality of life in Escondido’s downtown. They make other visitors to the downtown feel safer and more secure.

About a year and a half ago JPCatholic purchased the old Johnson furniture building located at 131 S. Broadway and the old Center City High School Building at 236 S. Maple (corner of Maple & 3rd). Both buildings had been vacant for many years. The purchase, made possible by the donation of $1.5 million by Terry & Barbara Caster, owners of A-1 Self Storage, will enable the Catholic university to eventually add a large chapel and classrooms for sound stages, editing suites, a screening room, acting and computer labs, a performance stage and a parking lot.

Currently the university is in the architectural stages of planning to repurpose the Johnson building for student housing.

Dr. Connolly said they are putting together a financial package that will combine donations and borrowing. “We reached the $1.5 million through a donation, and our goal is $2.5 million,” he said. “We are going to borrow the rest.”

The first phase will cost about $10 million, with a total of $30 million in building ultimately planned for the entire campus. But that is far in the future. Eventually they hope to raise about $5 million to build a chapel where the old high school building is now. “The chapel would be built entirely by donations,” said Connolly.

John Paul the Great Catholic University is named after the recently canonized Pope John Paul II. The decade-old institution started off in an industrial park in Scripps Ranch, before acquiring the building formerly occupied by the Mingei Gallery in Escondido, as well as other empty buildings in the area, such as the old bank building adjacent to Maple Plaza.

The university was Dr. Connolly’s brainchild. A native of Ireland with a soft brogue and a quiet manner, he immigrated in 1973 and founded the university as an act of faith.

JPCatholic offers degrees in three areas, theology, entertainment media, and business. It offers an MBA in film producing and an MA in theology, and BS’s in communications media and business.

“We are adding a new humanities degree program: creative writing and screen writing,” said Dr. Connolly. This will intersect nicely with the university’s degree in film.

“As long as there are still parents who still want God in their kids’ lives we will do well,” he said. “We have a good relationship with the city and the businesses of Escondido. For me it’s people recognizing that the university represents significant value to the downtown of Escondido.”