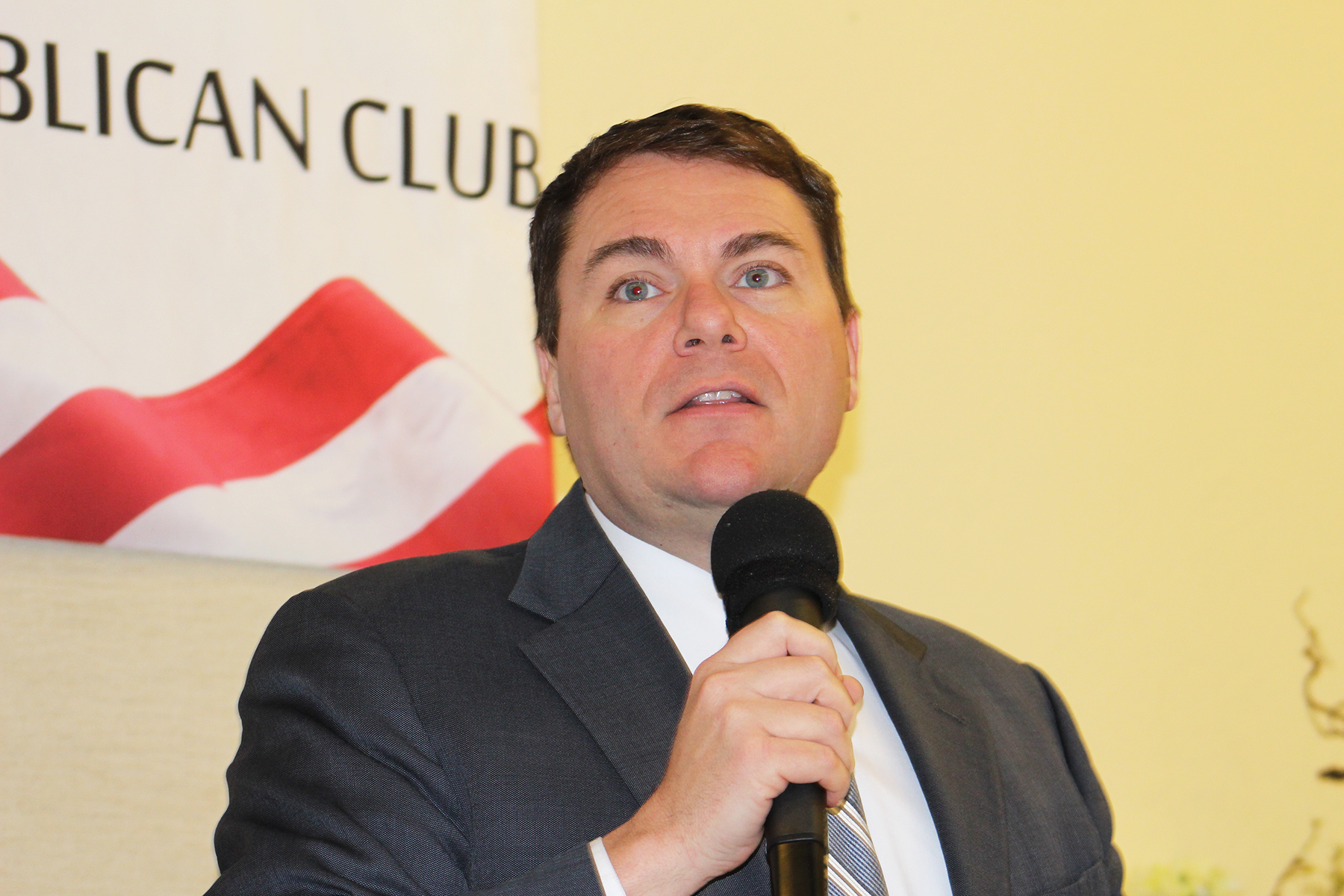 Radio personality and political activist Carl DeMaio’s appearance Monday at the monthly meeting of The Escondido Republican  Club Monday at Cocina del Charro required that the club open up the dividing wall at the dining room to make more room. At the end of his talk he got a standing ovation.

“This is about our efforts to take back the Golden State. It’s tough to be anything but a far lefty in today’s California,” DeMaio told fellow Republicans. But if the numbers that attended the speech meant anything, the Grand Old Party enthusiasts might have felt the blood flowing faster in their veins with renewed confidence. Even if their party did just suffer a crushing electoral Gotterdammerung in November.

According to club spokesman Diane Synder, at least 130 attended. “Great turnout!” she said.

The speaker earned statewide notice—and the enmity of the Democratic establishment including incoming Governor Gavin Newsom and retiring Governor Jerry Brown—when he led the charge to attempt to roll back the gasoline tax that Sacramento had enacted the year before.

He talked about how California was once a rock-ribbed Republican stronghold, as Orange County was once a GOP tower of power. He noted that the current political climate has caused many Republicans to flee the state.

“It isn’t just Republicans,” he said. “There has been flight of all kind of voters out of California that has helped turn neighboring states blue or purple. It’s not just conservatives fleeing. A lot of Democratic voters are fleeing because they can’t afford to live here any longer.”

He pleaded with his audience not to join the exodus but to “stay and fight!”

He argued that there are two options open to those who oppose the current rule of the majority party. “Flee or fight.” He prefers fighting.

He quoted a survey that says 57% of the state’s residents are thinking of leaving.

Showing why DeMaio is not a favorite of the state’s GOP establishment, he declared, “The Republican Party of California has been too stupid to take advantage of all of the bad things the Democrats have done.”

His solution is for the Republicans to adapt the strategies—but not the ideas—of the left. “Democrats are great at pumping out ideas,” he said. “They are crazy ideas, like taxes on air and water and attacks on Proposition 13, but when was the last idea the GOP put out?  An idea that resonated? Not just ‘say no’ but better, bold action. The voters we are losing are only hearing one side.”

When DeMaio visits colleges, he meets kids (not a majority obviously) hungry to hear a conservative message because they only hear ideas from the left. “There are conservatives, but to find them is like going to a speakeasy during Prohibition,” he said.

They also resonate when he tells them, “Our private property rights are being taken away. We talk to the kids about the Freedom Agenda. We, as the GOP, need to meet these voters.”

The second thing Republicans need to do, he said, is not only to have good ideas, but to explain them effectively. “Democrats have a knack for simplifying emotional arguments. So when talking about ‘sanctuary cities,’ they bring out an 11-year old girl who just wants to come to America to have a better life.” The real argument is whether criminals should be allowed to stay in the U.S., he says, but almost everyone’s hearts are touched by a little “dreamer” wanting refuge. “Sanctuary applies to illegals who are criminals,” he says, “not that little girl.”

Republicans need to express the message that they love immigrants—legal ones. “Immigrants have made us great! It’s offensive when we are that welcoming to be called racists.  With the numbers we are welcoming we want to make sure they are legal.” Again and again, he said, Republicans are tricked into letting Democrats set the terms of debate.

The third thing Republicans need to do: “You gotta hustle! Take the battle into the streets. They are always going into strong Republican districts. They came into Escondido to try to flip the 50th Congressional District. They weren’t able to do that, but they did flip the Escondido city council, including the mayor. Millions of dollars were poured into San Diego County. They are taking the battle into the streets.”

Now, however, says DeMaio, the ruling party in Sacramento has become so self-confident that they are giving the GOP issues that resonate with the voters, even moderates.

Such an issue was the gas tax, which DeMaio fought by putting a repeal on the ballot. “We decided we were going to punch the bully in the face!” He led the successful recall of one of the California senators who voted for the tax, Josh Newman.

“If the Democrats don’t like a petition, they hire bullies to go block you while you are gathering signatures,” he said. “Their goal is to harass and bully and create a scene so that weary shoppers will avoid that part of the store.”

DeMaio and his group Reform California fought this with 20,000 volunteers who carried the “long form” petitions. This meant professional petition gatherers couldn’t charge as much for services. As a result Reform California gathered a million signatures on shoestring budget.

What defeated the measure, says DaMaio, is that the Secretary of State was able to change the title of the measure from “Repeals Gas Tax,” to “Eliminates Road Repair.” Enough voters were confused that the final vote was 55% no and 45% yes. “When pollsters presented the measure to people with the original title, support was 68 percent,” he said.

Rather than becoming discouraged, says DeMaio, “We’re learning, we’re regrouping and we’re fighting! We’ve built a network of twenty thousand volunteers. There is a hunger among the grassroots. If the rest of the GOP would just get out of the way we could become competitive in California again.” He added, “Failure is not failure as long as you never give up. We need to continue to fight and regroup.”

His Reform California is a “permanent campaign,” he said. “We are three hundred and sixty five days a year. We now have people walking door to door for the 2020 campaign and our goal is to reach a hundred thousand homes.”

Among their other goals are to stop more tax hikes, audit voter rolls and conduct a drive to inform union members that the Supreme Court has ruled they no longer must pay the part of the dues that unions use for political campaigning. “That will cut the flow of campaign cash to Sacramento politicians,” he said.

For those interested in finding out more about Reform California, email info@reformcalifornia.org or call 619-786-8019.