Candidates give their pitches in first forum of season 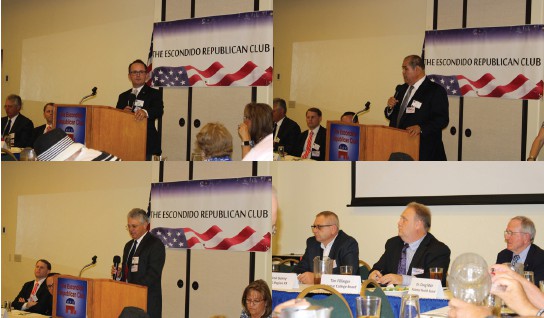 The candidates who attended the luncheon meeting at Cocina del Charro included:

The club noted that it recently opened the city’s GOP headquarters on Grand Avenue. The HQ is open Thursday, Friday and Saturday. Volunteers are being sought to make phone calls to voters. They are trying to do 1,000 calls a shift and hope to have at least four volunteers making those calls during each shift.

During Monday’s meeting each candidate was accorded three minutes.

The first candidate to speak was Joe Garcia, who seeks the city council seat in District 3, where the incumbent is Olga Diaz. Garcia, who has lived with his family in Escondido for about 20 years, said that for him “Escondido truly is the city of choice. To make our city the crown jewel of North County we need safer neighborhoods.”

Garcia said he has met with Latino activists in the city. “They see a different attitude by the police” which he said is a positive thing. Besides safer neighborhoods, Garcia said he wants to focus on better education and fiscal discipline. “I want to help and foster community unity. If our city is going to get to the next level we need our city to come together,” he said.

He said his approach is based on the “Three L’s” which stands for Listen, Learn and Lead.

Robroy Fawcett is one of five candidates for city treasurer. “I believe the city needs an independent city treasurer not appointed by the city manager or the mayor,” he said. “I’m an advocate of open government and I will keep you informed of everything. Elect ‘Open Fawcett’ and the money will flow!” he declared.

Fawcett said he is opposed to the current “skyrocketing” public employee salaries and that he will lead by example.” He said that current the treasurer’s salary is tied to the rates paid to high-ranking city administrators. His goal is to cut all administrator salaries, including that of the treasurer. “I will match dollar for dollar any cut,” he said. He said he believed he could save the city from $100,000 to $200,000 a year.

Douglas Shultz, also a candidate for treasurer, said he always wanted to be more involved with the community where he had grown up and that is why he ran for treasurer.

He has ten years of experience in financial services, as well as experience serving as a volunteer in the treasurer’s office for three years. He said he was not afraid of handling the large amounts of money the city invests annually and has managed an $80 million portfolio. He called himself the only candidate endorsed by four of the five city council members and the current treasurer, Ken Hugins — and the only candidate with financial experience. Another reason for voting for him, he said, is his bachelor’s degree in economics.

Dane White, 27, is running for the school board in District 4 of the Escondido Union High School District. He has lived in Escondido most of his life. White is a tradesman and carpenter who, if elected, would like to institute a true vocational program at the high school.

“Our district does a wonderful job of making people college ready, we would like to bump it up a little more for vocational education,” he said. He said he also wants to focus more on at risk students.” White, who was a foster child, said that he received wonderful mentoring from his foster parents. “I would like to offer the same chance that I was given to other at risk kids.”

Mirek Gorny is a candidate for Escondido Union Elementary District, region 4. He has been a member of TERC for several years and had once been president. He moved to Escondido in 2001 and said, “This is my city of choice.”

Gorny has been president of the Escondido library board of trustees for a year and a half, where he advocated increasing eBook availability to patrons and installing RFID readers and bringing faster internet to the library.

As a local real estate broker Gorny said his experience as a negotiator, would be useful on the school board. “ I have a four year old son and I’m very passionate in asking that all students receive a quality education. I will stand up for all of the students, no matter their status,” he said.

Tim Fillinger is running for the Palomar Community College board, which is responsible for a budget of ½ billion dollars. The board decides who will be awarded the construction for millions of dollars of building projects for the largest community college district in the state. It also decides what clubs are allowed on campus. He would like to implement better internships at the college.

He would bring a Republican’s perspective to the board, which he said could use it. He asked members not to waste their vote by spreading them out between several candidates. “We need more Republicans on that board.” Although candidates are not allowed to name their party in ballot statements, he said you can tell because a “conservative” is a code word for Republican and someone supporting “diversity” is usually a Democrat.

Dr. Doug Moir Is running for the Palomar Health Board. He has been a doctor practicing at Palomar Health for many years. “In a sense I know where all of the bodies are buried,” he quipped. “I’m the only candidate with experience in raising funds for Palomar Health.” He noted that the district is the largest hospital district in the state.

The next candidate forum in Escondido will be the Escondido Chamber of Commerce forum for city council and the Board of Supervisors Thursday, October 6, 7:15 a.m.–9:30 a.m. at the California Center for the Arts, Escondido.