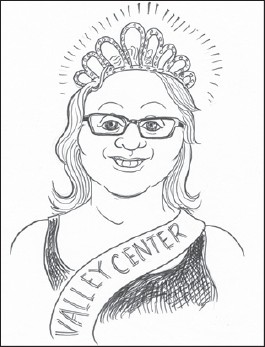 Part of a series on the 2015 Honorary Mayor’s Race in Valley Center. There are five candidates. We will be profiling all of them.

“I’m promising to show up,” said Kami Voertman, the Chamber of Commerce’s candidate for honorary mayor. “If you elect me all you have to do is call me and I’ll show up.” You’ll recognize her at various functions around town wearing her special outfit with cash bills attached to invite the passerby to contribute some money to her campaign. You will also find her jars around town at various businesses.

Her main fundraiser cause as candidate is to benefit the high school, where her daughter, Chase, is currently a senior.

One of the Chamber’s main fundraisers in the campaign is selling spaces on the placemats that will be available at the Rotary Club’s pancake breakfast on the Saturday morning of Western Days.

About the campaign she says, “It’s all for fun. I think it should be fun and crazy. I plan not to take myself too seriously. All of us are just trying to raise money for our favorite causes, and all of us are friends.”

Voertman is the owner of Broken Rock Ranch, which she has had since 2009 and where she and her husband Will have lived since 2010. They came to VC from Oceanside. She likes everything about Valley Center. She says, “I like farming. I like going to the rodeo. I like going to Bates. I like to support the community, whether it is a business or a cause.”

Among the causes she supports is Relay for Life, which she participates in every year. This is a personal thing for her since several family members have had cancer. 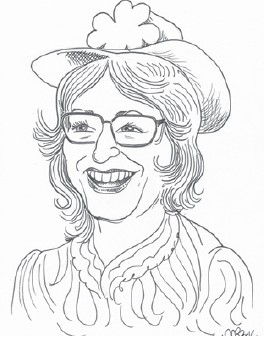 Although it hasn’t happened in about 25 years, Gina Roberts wants to break with tradition and get herself reelected to the completely symbolic office of Honorary Mayor of Valley Center, representing the VC Kiwanis Club.

The last time anyone was reelected honorary mayor in VC was when the late Judy Haynes was reelected multiple times. It hasn’t happened since then, and Roberts would like to change that.

“My work is not yet done,” she said recently, sounding like some Western hero getting ready to ride off into the sunset. “I’ve done such a good job of not squandering public funds that I want another chance.” She is not even planning on squandering her own funds. She is going to repurpose the signs that she used last summer when she ran for the Valley Center Pauma Unified School District board.

Dottie Christiansen is her campaign manager. In fact, she was the one who suggested that, “We need to run the incumbent,” at the meeting where the Kiwanis decided to draft her for another run.

Her campaign so far has included a barbecue at Triple BBB Winery in March, where she served her six-time winning stew from the Irish Stew Cook-off. Besides that she also plans to “go around town and try to strong arm people into supporting me.”

The Honorary Mayor unveiled her new campaign slogan: “To boldly go where no one has gone in recent history.”

Some of the positives of being honorary mayor have included riding in the Western Days parade, “Last year I decided to enjoy everything that Western Days had to offer. I had a ball. I really enjoyed it. I’ve met so many people and found out so much more about Valley Center. So, it would not bother me at all to do it again.”