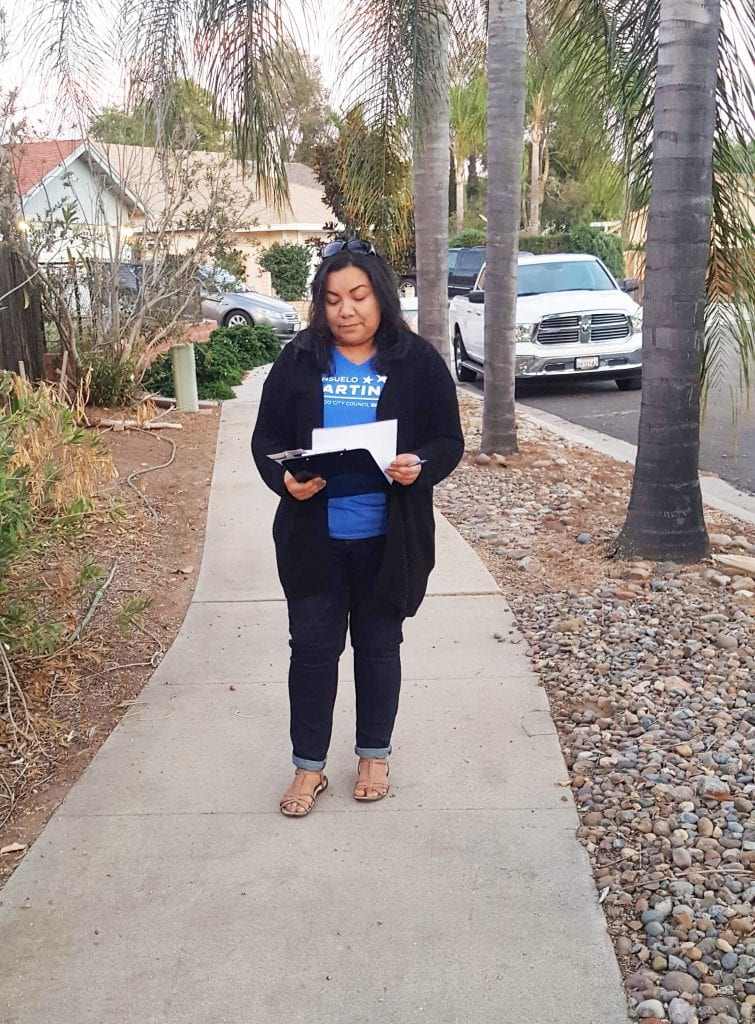 Candidate Consuelo Martinez canvassing the first district the last week before the election.

Candidate Consuelo Martinez is canvassing the homes of District 1 in quest of winning the city council seat for the district.

“I’m visiting houses in the district, canvassing and talking to the voters about the issues.” In the process of doing that, Martinez discovered one issue she had not been aware of: “A large part of Escondido doesn’t get their street swept on the regular basis. I had to ask the city what the schedule is; and they did let me know that there are higher and lower priorities. A large part of Escondido is not a higher priority.”

However, she says, because she brought the issue up, they added reporting the need for street cleaning as something that can be reported on the “Report It” app that is available to be downloaded on Smartphones.  “They  added it because of my inquiry,” says Martinez. “When I’m canvassing, I show them how to use the app and in some cases I have used the app to get a neighborhood cleaned.”

The candidate also reports graffiti on the app and helps residents of her district report it. “I’m loving knocking on doors because you can connect with the neighbors. I want to connect my neighbors to the critical services they need. I’m happy to be their go-to person,” she said.

She said if she is elected next Tuesday that she will use her influence to try to ensure that the already-approved skate park at Washington Park, “will happen in the timely manner. And a lot of the people are very supportive of that.”

Another issue that comes up frequently when she speaks to votes is the city’s water treatment plant that has been approved for Washington & Ash. “There has been a lot of disappointment that the treatment plant is going up. A lot of people didn’t know it was happening.  I let them know that is something I as a citizen have spoken out against. It should have been in an industrial zone.”

Martinez is trying to whip up interest in voting on Tuesday. “I’m talking to my neighbors about is the importance of voting in the midterms, and the important local races, like mayor and city council and school board,” she said. “I would love to see more participation in voting. It’s a shame these midterms get overlooked. I’m letting people know they can drop their ballots off by mail or at the Escondido library. I am being resource for people who are first time voters.”

She adds, “I’m getting a lot of positive feedback on that and the things I’d like to see. The response has been very positive.”

From now until Election Day, Martinez says she will spend the time knocking on doors and reaching people who might not have been there the first time I came by. Next, we will be reminding people to go to the polls.”

Martinez has a team of volunteers, many of them young people who live in her district. It’s nice to see the leadership developing in the district.” Her volunteers include nephews and nieces, family and neighbors. “The most important thing is opportunity. It’s important to promote local elections. It’s next Tuesday and they can go to the library and drop off the ballot. I tell them how important it is to participate in their own back yard. I want to do important things for my city. I grew up here. I hope our neighbors show up and everyone votes.”