Campa-Najjar opens Escondido offices: “I’m the only candidate who wants to represent everybody” 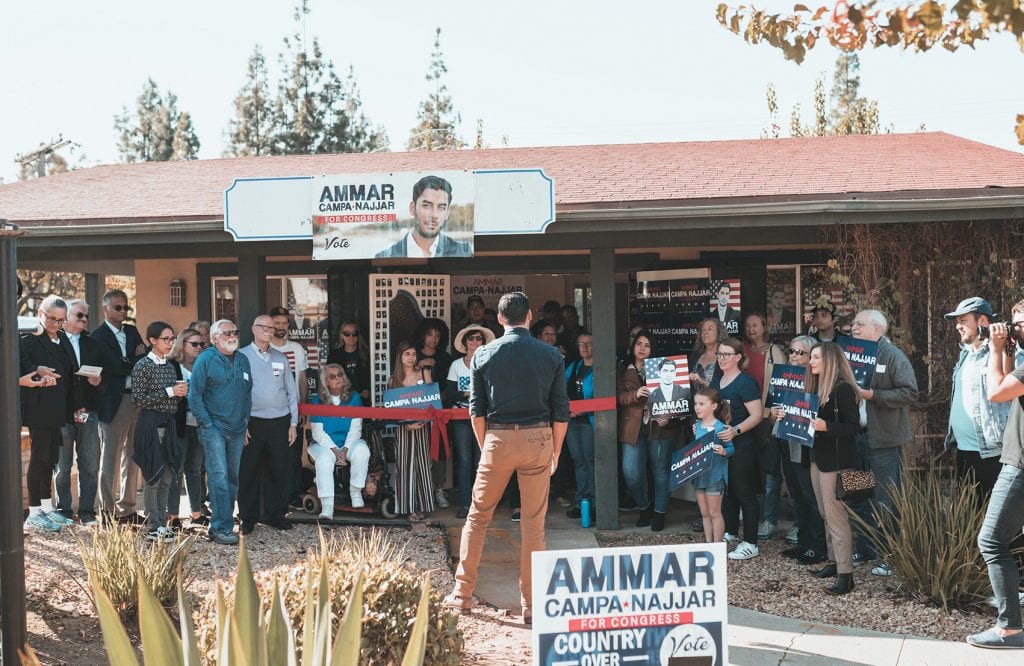 Democratic candidate for the 50th congressional district Ammar Campa-Najjar opened his Escondido HQ last week on Grand Avenue and another office on Sunset Drive in Escondido.

This week I talked to the candidate, who said he’s been wearing holes in his shoe leather going door to door, and preparing for the big debate February 7 in Valley Center’s Maxine Theater. He also discussed the most pressing issues as he moves towards the March primary election.

“I’m excited to see that all the qualified candidates will be there [at the forum],” he said. Running  a second time for the 50th District seat, after almost unseating then-incumbent Duncan Hunter Jr. in 2018, Campa-Najjar said, “I’m canvassing everywhere. Going door to door.”

He feels a lot of good will after his first run at the seat. He was pleasantly surprised recently when he was at the airport and was recognized by someone who had voted for him in 2018.

“I think we can take that good will and use it to get over the top,” he said. “That’s part of what propelled me to run again. It’s great to see that borne out not just in the polls.”

Important to know: No matter who comes in first in the March election, there will be a run-off in November between the top two vote getters. Even if one candidate wins more than 51% of the vote.

At one time there was a possibility of a special election to fill the seat until next year after incumbent Duncan Hunter Jr. announced his impending resignation, several days after pleading guilty to federal charges of misusing campaign funds.  However, Hunter delayed leaving office until January 13, which statutorily meant no special election and a vacant seat until January of 2021.

Campa-Najjar criticizes Hunter for delaying. “Lo and behold, Hunter waited because the GOP was concerned I could run away with it in a special election,” he said. “We can thank Hunter for the fact that we won’t. I’m looking forward to picking up the pieces and making sure we have a congressman who can serve the district.”

His new office on Sunset Drive was once a church. Campa-Najjar considers that appropriate. “There is a crucifix in the window,” he said. “A charming space. I consider what we are doing is a form of political ministry for those who feel left behind. We are reaching out to the district and evangelizing the message of hope. I like it. I wasn’t planning on it but it turned out to be perfect!” 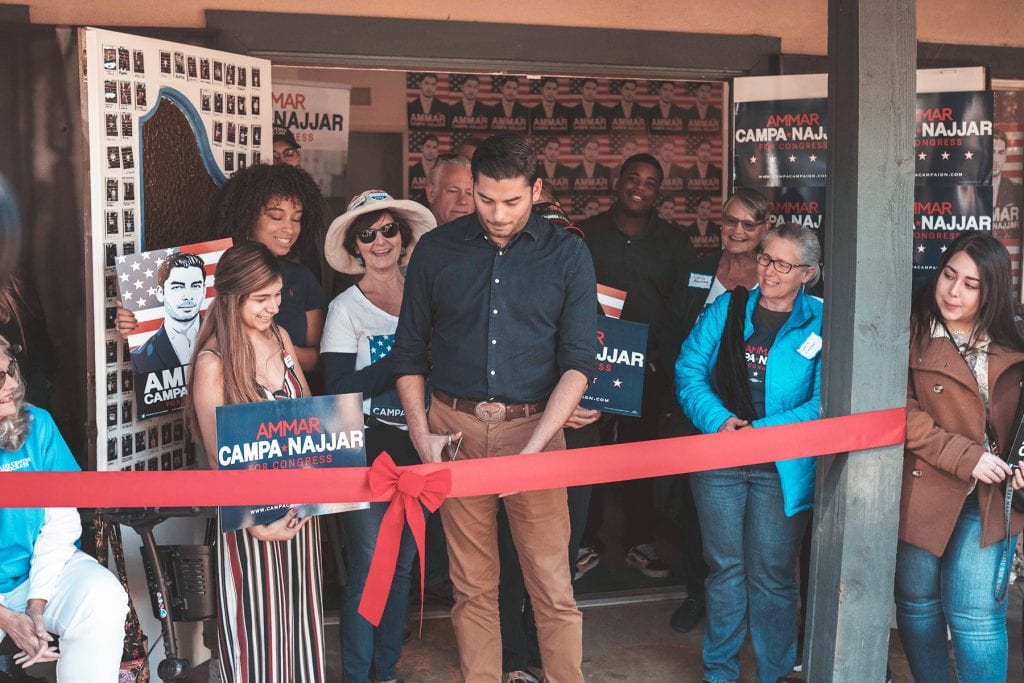 Ammar Campa-Najjar cuts the ribbon for his Escondido office.

The campaign last week had a kickoff at the Sunset office followed by a Town Hall meeting.

“After three years of running I’ve honed my message,” he said. “It’s not for party elders, or outside groups. My catchphrase is ‘To listen, to learn and to lead.’ Whether the issue is the cost of living, the cost of housing, the cost of gas, mitigating wildfires, reducing congestion, protecting VA benefits and Social Security, creating economic opportunities or tax cuts for small business owners. I’ve heard this for three years and I’ve honed the message. We have a really good shot this time.”

Campa-Najjar talks a lot about restoring power to the voters and holding Washington accountable for government reform. “Me and Carl [DeMaio, a GOP candidate for the 50th] have some pretty sweeping agendas when it comes to government reform. I think mine is more bold. I go further than he In reining in dark money. I want to overturn Citizens United. People who are convicted shouldn’t have pensions. No budget no pay for Congress. My agenda goes further.”

He accuses his GOP opponents of being “in lock step with the President. I wonder if they support his tariffs?” He ticks off several other issues important to his campaign: “We need to restore war powers back to Congress. Presidents since Bill Clinton have overextended their powers to get into war. I have a holistic approach to immigration.”

Conceding that the candidates have a lot in common in their goals, he insists “I have a more comprehensive agenda. For example I want to talk about how to bring in Native Americans. I have fifteen to eighteen tribes in my district.”

Campa-Najjar emphasizes,  “I’m the only candidate who wants to represent everybody. My message is inclusive rather than one party. I put country over party. The others are talking about keeping it in a party, but sixty-five percent of the district doesn’t identify as Republican. If you look for someone who lives in the district and nearly won it two years ago, here I am. People are frustrated at politicians who look down on people, take the working class for granted and look out for the well off. We are the afterthought of the rest of San Diego County. Put this seat first, take this seat back and give it back to the people.”

2 responses to “Campa-Najjar opens Escondido offices: “I’m the only candidate who wants to represent everybody””