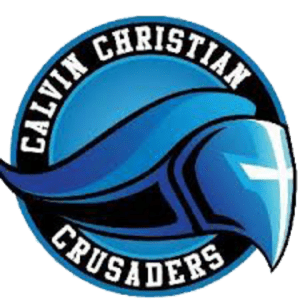 At least as far as this year is concerned, no team moniker is more apropos than the one owned by the Calvin Christian football squad and its players.

They answer to the name of the Crusaders and as it relates to the 2017 season, they’ve been on an undeniable mission – a crusade if you will – to recapture a title that in their minds was allowed to slip right through their grasp last November.

It was then that Coach Randy Kreglow’s team, undefeated in nine games and looking to repeat as the San Diego Section 8-Man football kingpins, suffered an anguishing 44-38 defeat to Foothills Christian in the championship contest. What made that loss particularly difficult to swallow was that Calvin Christian had left as many as 24 points on the field instead of putting them up on the scoreboard. Knowing that they had plenty of opportunities to seize control of that game and weren’t able to capitalize on those chances had been haunting the Crusaders ever since.

Hence a goal, mission and passionate crusade was born – to make amends for what happened in that tilt and not be satisfied with anything less than bringing home another championship trophy. And so far, the crusade gives every appearance of being one that will ultimately pay off in both total victory and glory.

Evidence of this was again on display last Friday night as the Crusaders rolled to their eighth straight win with a decisive 45-17 conquest of visiting Victory Christian (2-4). After a relatively competitive first quarter that saw CC holding onto a 10-3 lead, the Crusaders kicked things into high gear and exploded for 28 points in the second stanza that blew away the Knights from Chula Vista. This impressive scoring blitz required only 8:38 in time and completely removed any doubt about the outcome of the game

The six overall CC touchdowns came from four sources. Versatile Bryce Lovisa scored on 6-yard sweep before taking a quick flip from quarterback Matt Lafler, getting to the outside and then speeding by a last defender en route to a 48-yard scoring play.

Lafler was another Crusader who hit paydirt twice. After scooping up a fumble that he returned for a 5-yard tally, the 6’3” senior then later followed a good push from his offensive line and sneaked one in from a yard out.

Others finding the end zone were Evan Senti, who once he got around the corner, found no one home on his 11-yard scamper. The final CC score came courtesy of a determined 2-yard plunge from lineman-turned-runner Nico Brouwer, who three plays earlier had dazzled the crowd with a powerful 20-yard burst in which bulled his way past a pair of Knights incapable of bringing him down.

The balance of the CC scoring was provided by the dependable foot of kicker Daniel Esguerra, who not only converted on all six of his PATs but also emphatically punched through a 22-yard field goal with plenty of leg to spare.

And though the defense wasn’t real sharp right off the bat (“I thought we came out a little flat on that side of the ball,” said Kreglow), it nonetheless started to exert its influence as the game wore on and was quite instrumental in helping to establish CC’s dominance. It wasn’t until the Crusaders had liberally substituted with new personnel in the fourth quarter that the Knights were finally able to cross the goal line on a 31-yard scoring reception by Jalen Wilson and a 5-yard keeper by quarterback Larry Oldham III.

Among the Crusader defenders making an impact was Lafler, a gifted two-way performer who might be every bit as good a linebacker as he is a QB. In addition to his aforementioned fumble recovery, Lafler showed his ability to hound the passer by registering a pair of sacks.

In the trenches, Brouwer wreaked real havoc by causing a fumble, recording a tackle for loss and being credited with two hurries. Meanwhile, on the back end, Paco Corona successfully broke up three passes. But that was hardly Corona’s only contribution. The elusive sophomore also netted 91 yards on four punt returns including a 37-yard gem in which hustled to his left, streaked down the sideline and finished things off by twisting his way down to the 1-yard line which set up Lafler’s short keeper.

Moving forward this week, it would be a huge shock/upset if the Crusaders didn’t keep right on truckin’ against Horizon Prep (1-5) in a rare Saturday afternoon contest to be played on CC’s home field.

Then comes the game that the Crusaders have been anticipating all season. On November 3, CC will travel to El Cajon where it will get another crack at the Foothills Christian team that dashed the Crusaders’ championship hopes last year. And taking down the Knights will be no easy task considering the fact that FC is on a notable roll of its own—having won six straight games. But it goes without saying that the Crusaders will relish the possible chance of exacting some sweet revenge. “That’s the game on our schedule that we’ve had circled for a long time,” Kreglow admits.

The exceedingly positive culture that Kreglow and his staff have been able to create at Calvin is noteworthy. The Crusaders have now won 20 of their last 21 games over the past three seasons and are currently ranked as the 28th best 8-Man squad in the entirety of California.

Moreover, CC has outscored its opposition by a whopping 218 points in 2017 while averaging a glossy 45 per contest.

When asked why the Crusaders have ascended to such a lofty level, Kreglow points to a number of factors. “To begin with, we’ve been blessed with some really talented classes,” says the coach. “And with the success we’ve had, more kids have gotten interested in coming out and being a part of the program.”

Kreglow also feels that the rudimentary and fundamental approach that has been adopted at Calvin has played a major role in the team’s viability. “We always strive to keep things simple whereby the players can just go out and play and react as opposed to having to over think anything.”

Then there’s always what has become a staple of Calvin football, a strong and deep running attack. “We’ve really developed a great rotation at the running back position,” says Kreglow, “and because of that, our guys are able to stay fresh which gives us an edge when it comes to wearing down defenses.” For example, in the game versus Victory Christian, the Crusaders utilized a total of nine ballcarriers, four of whom gained at least 22 yards.

And so the crusade for Calvin continues. So far, it couldn’t have gone much better but the real sought-after prize (a CIF title) still looms in the distance. And until that’s finally secured, the Crusaders will doggedly forge on with their quest.