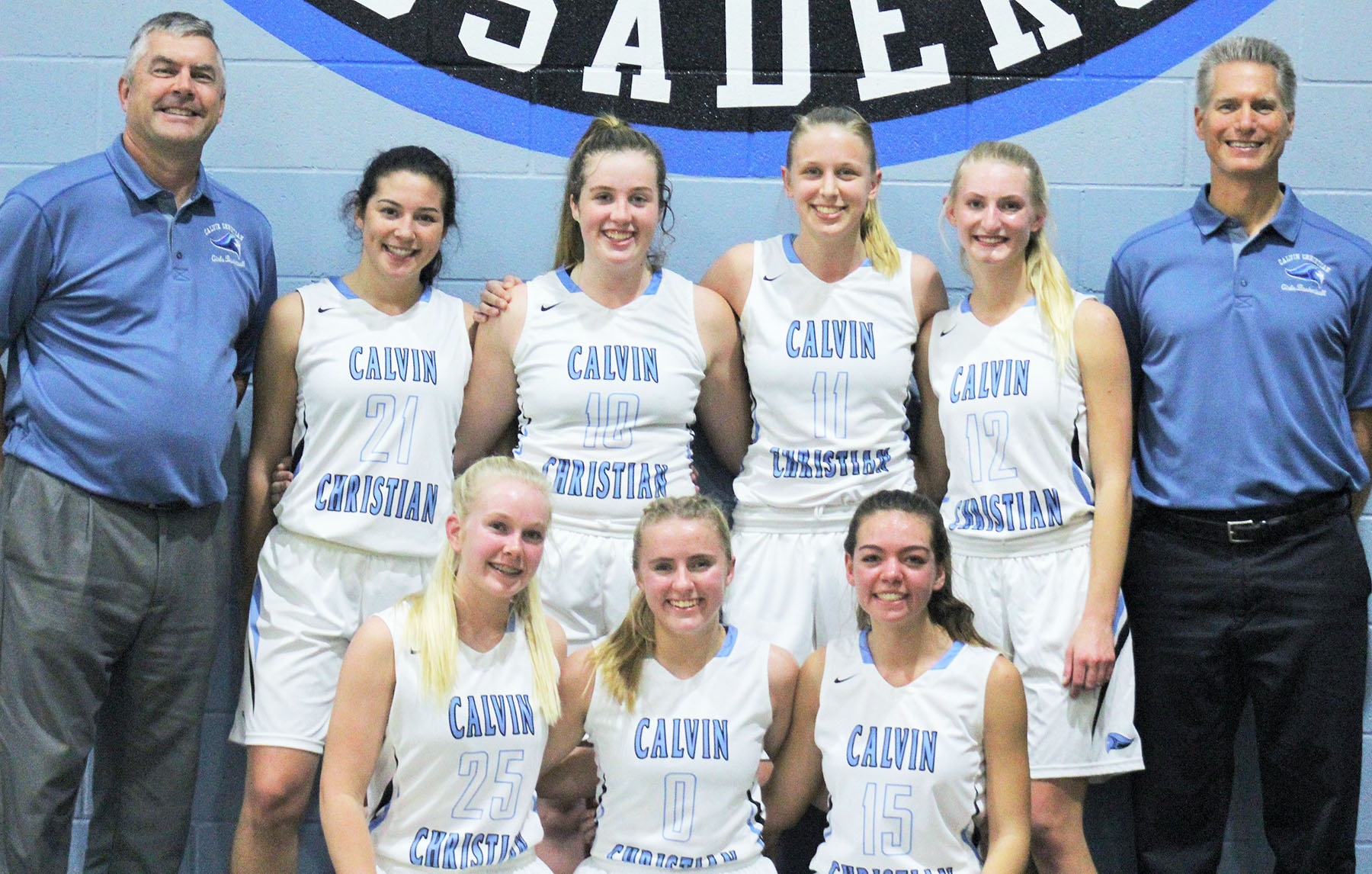 By any measure, the Calvin Christian girls basketball team enjoyed a tremendous season.

To begin with, the Crusaders won 17 of 21 games. Their home record was a near perfect 10-1. Coming out of the chute, CC won its first eight games. That was later followed by a pair of four-game winning streaks.

Moreover, the Crusaders would eventually finish a noteworthy second (7-3) in the Pacific League behind formidable Tri-City Christian. And once the playoffs commenced, CC did itself proud with a couple of postseason victories that advanced the Crusaders all the way to the Division III semifinals.

Yeah, that’s some pretty good going. But there’s an interesting sidebar to the story. With only a month to go before the start of the campaign, Calvin numbered only four girls in the program. That’s right, not even enough to field a starting unit. You talk about a numbers crunch. This was a serious manpower shortage if there ever was one.

Out of both necessity and desperation, an appeal was made to the CC community to find enough bodies so that the season wouldn’t be washed out. Fortunately, a selfless young woman who had friends on the team but no basketball experience answered the call. And soon after, two gifted soccer players agreed to come on board and compete in multiple sports during the same season. That brought the roster to a total of seven and with that limited personnel, the Crusaders went on to defy plenty of odds and produce something special.

“When you take into account what we had to overcome and the obstacles we faced,” said head coach Bill Stout, “we had terrific success. On a deep level, I’m really pleased and delighted with what we were able to achieve.”

Because he possessed a talented senior core of three experienced performers in Mikayla Balt, Corinna de Jong and Nanette Steenstra, Stout felt the season would be a positive one if only he could add just another player or two or three to the lineup. Barebones or not, Stout sensed the situation was workable. “With that senior group coming back, I believed we could be pretty good,” Stout said. “But even I was surprised at how good it turned out.”

And it worked because in addition to their blending of compatible skills, the Crusaders epitomized unity, unselfishness and the joy of playing together. There was a genuine sense of kumbaya taking place, where the harmony wasn’t contrived but was instead, heartfelt.

Though every member of the squad would go on to make meaningful contributions, it was Balt, de Jong and Steenstra that joined forces to form a “Big Three” if you will.

Balt was a scoring machine (21.4 ppg) who incorporated a newfound perimeter game that featured mid-range jumpers. Tall, athletic and armed with good moves, she excelled at putbacks and gathering in offensive rebounds. Always looking to score, she was a force to be reckoned with not only this season but while tallying over 1,300 points during her stay at Calvin.

As for de Jong, she was an across-the-board whiz who averaged 15.6 points, 9.9 rebounds, 4.6 assists and 3.1 steals per game. Operating as a point guard, her ball-handling skills, basketball IQ and poise under pressure were conspicuous. An inventive and creative scorer, de Jong did some of her best work around and under the bucket. Aggressive and relentless, she was never afraid to mix it up with the opposition. Rated as a plus-defender, she also cracked the 1,000 point barrier.

The third member of the stellar seniors was versatile Nanette Steenstra who put up solid numbers (7.9 ppg, 6.4 rpg) and proved to be the team’s top facilitator (6.1 apg). Totally embracing her role as an assist maven, Steenstra exhibited a keen awareness of where her teammates were and how to go about setting them up. Her passes on the inbound plays were particularly noteworthy. Considered to be a dynamite defender, she was always assigned the task of guarding the toughest of foes.

The other player who helped make up the original four was sophomore Anneke Jacobi. Her strong points are to be found on the defensive side where her ability to take away the dribble drive and shutdown the 3-point shot are invaluable. 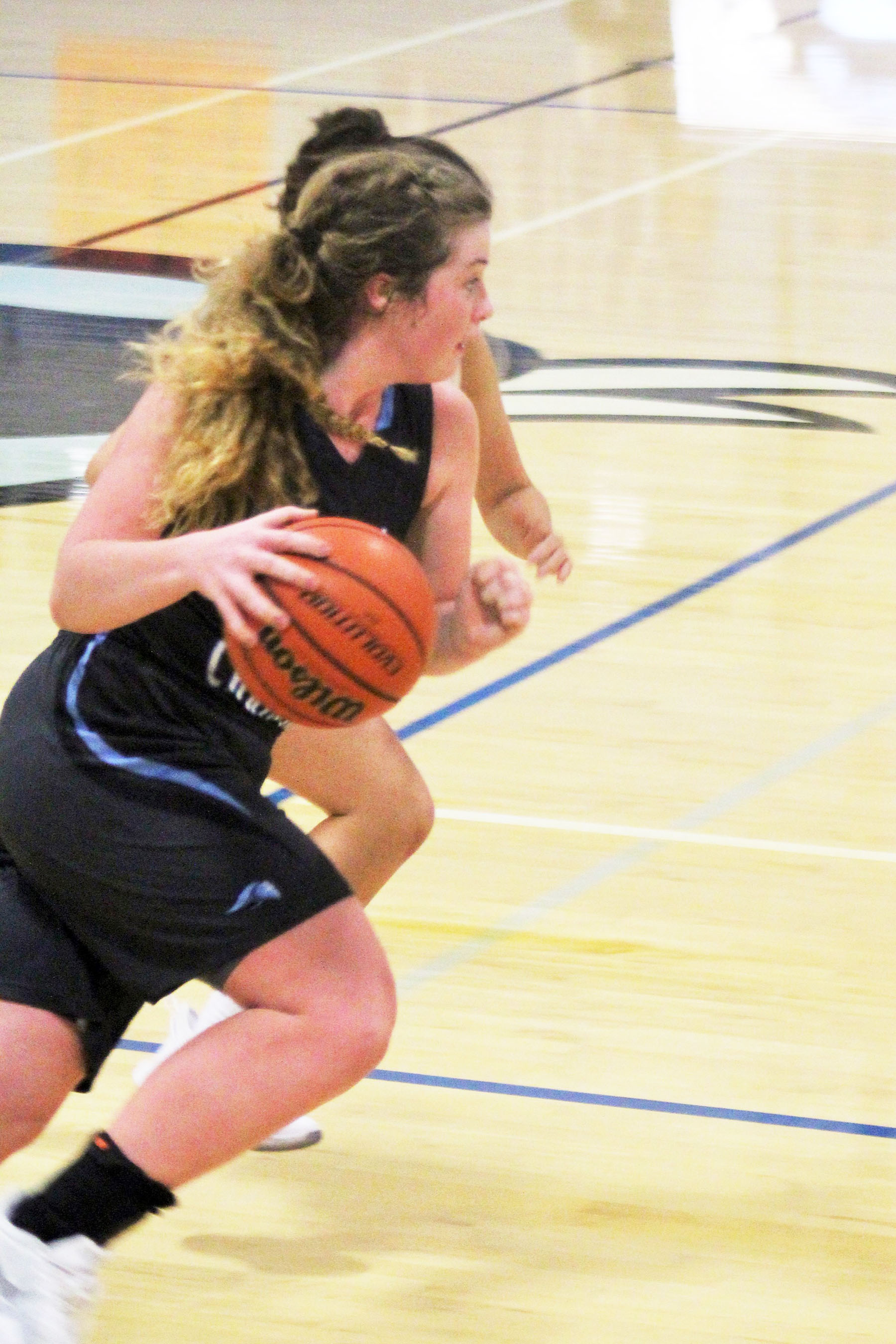 When the plea was made for someone to join the fray so that Calvin could put the bare minimum of five players out onto the court, it was Anna Mays who stepped up. The importance of this act should never be underestimated or minimized. Though a newcomer to the game, the athletic Mays filled a vital role by occupying a spot and delivering some timely stops with her admirable help defense.

Finally, there was the duo of Aubree Anderson and Grace Bons who came over from the soccer squad to concurrently participate in hoops. And what an impact they made! Aggressive in their mindset, they proved to be very effective rebounders and defenders. Energetic, spirited and relentless, they were assets the Crusaders simply couldn’t have done without.

After neatly negotiating their way through the regular season with a 15-3 record, the Crusaders more than justified their No. 3 seeding in the Division III playoffs with a pair of impressive wins. In an opening-round contest, CC blitzed Brawley by a 51-22 count with Balt going on a tear with a game-high 26 points. Meanwhile, the gifted de Jong was at her all-around best while delivering 17 points, 8 rebounds, 6 assists and 4 steals. Anderson also made a mark with a 6-rebound effort.

And then in the quarterfinals, Calvin ratcheted up its defense down the stretch and outscored Point Loma by 10 during the final eight minutes to emerge with a dramatic 61-58 triumph. Again it was Balt who led the scoring parade with 27 more points, 13 of which came from the free throw line. And not to be outdone, de Jong was her usual stellar self, coupling her 23 points with 10 rebounds. Steenstra was another major contributor with a 9-point, 5-rebound, 4-assist outing.

Though their season would come to an end during a semifinal loss to second-seeded San Dieguito Academy, there was no disputing that the Crusaders had experienced a most memorable run. To have risen above a numbers challenge that would have sunk most teams is a legacy of which to be proud.

And so with apologies to Yul Brenner and Steve McQueen, they weren’t the only ones who were part of a “Magnificent Seven.” A certain local basketball team that answered to the name of Crusaders was all of that and then some.