“It’s been a long time dream of ours,” said Terry Cox, superintendent of Cal­vin Christian schools in Escondido. The dream? To add a building that will house a theater and chapel to the campus that existed for more than 50 years and a high school that was built 32 years ago.

This is his 17th year as superintendent of the private Christian school, which serves students from K-12.

Currently the school, which has about 370 students, holds chapel in the library and stages theatrical productions in the gym or in the library. Now both the gym and the library will be able to be used for their intended purposes—uninterrupted by other activities.

The staff, parents, students and sup­porters of the school have dreamed about building a multi-purpose building for about 15 years, but four years ago began doing it in earnest.

The school board began looking at a va­riety of designs for the “Heritage Center,” which will have state-of-the-art sound and lighting that will make it one of the finest venues for a dramatic production in the area. At 620 seats, it will rival the theaters at the California Center for the Arts, Es­condido. It will also be used for worship and for meetings.

Artist’s conception of the Heritage Center.

will be flexible. A so-called “black box” theater, it will be able to be configured for small audiences of a couple of hundred or so, up to the maxi­mum. The stage will also have flexibility, so that it could be used for small, intimate productions as well as musicals, which the school does from time to time. Last fall, for example, the school put on “You’re a Good Man, Charlie Brown.” The facility will also be available for other organizations in the community to rent.

Several years ago the school adopted a fund-raising strategy to raise the needed money, which was judged to be $4.7 mil­lion. The school set the goal of raising 80% of that, with the thought that they would fi­nance the rest. However, enthusiasm for the project was so high that they raised it all. It was a mix of large and small contributions, ranging from $25 on up.

“At the end of the day we raised it all. No debt!” says Cox proudly.

Cox thinks it has something to do with the desire among some of the grandpar­ents to be able to hear their grandchildren clearly when they appear in a play! “A lot of the grandmothers tell us, ‘I want 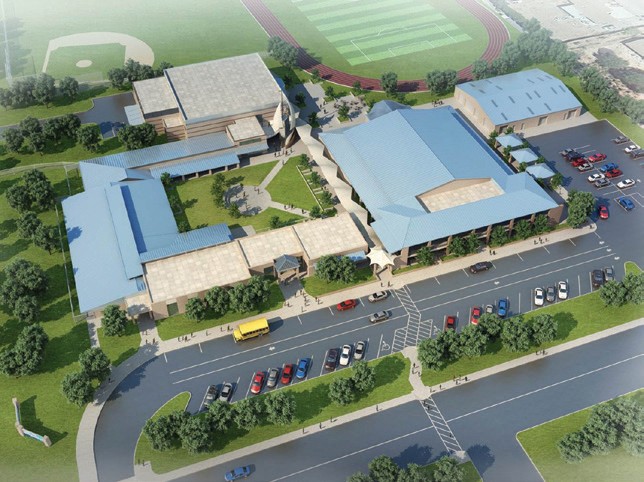 An aerial view of the project.

to be able to hear my grandchildren sing and I can’t do it in the gym.’ ”

Groundbreaking took place last October and the permits are now in hand to begin the project, which could open by the fall of 2017, in time for the new school year. “I’d be disappointed if we aren’t ready to use it by then,” said the superintendent.

The first job is getting the site ready for power and water. “We are our own general contractor for this project,” said Cox. “We have several members who have a great deal of expertise in this area.”

The key to the project is ensuring the qual­ity of sound and lighting. This aspect of the project will account for 25% of the total cost.

The project is the largest one the school has ever done in its history, and it will be the final piece in the puzzle of the campus. “It will allow our gym to be a gym and allow the library to became a modern media center. So that is a plus as well,” said Cox.

“All grades will use it,” says Cox. “It’s going to be state-of-the-art. I think it will be a great thing, not only for our school but for our community.”