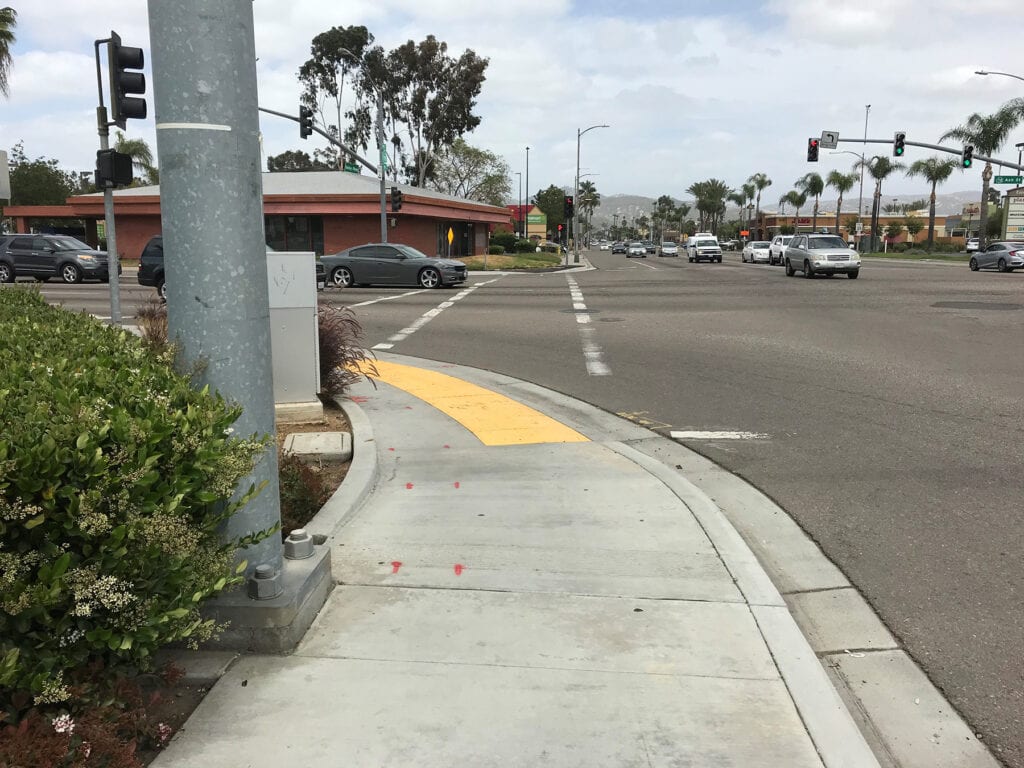 One of the 86 ADA compliant ramps that Caltrans has installed along the route of its SR-78 pavement rehabilitation project along five miles in Escondido.

The Caltrans Hwy 78 pavement rehabilitation that began several months ago in Escondido is going to start getting noisy at night along the five miles of the project that runs through the city, beginning June 1.

The Times-Advocate spoke to Kareem Scarlett, project manager for the North County Corridors SR-78 and SR 74 projects about his desire to get the word out about pavement construction that will start happening.

“This is a big part of the project and more inconvenient as far as noise is concerned,” said Scarlett.  “It will be in the evening, which has been deemed the only option. All we can do is inform so residents can make other plans.”

Traffic will not be impeded by the work. There will be full access to motorists and no full lane closures. At no point will all four lanes be closed. “At that time of night we don’t anticipate any delays in travel,” said Scarlett. The main inconvenience will be the noise.

June 1 is “D-Day” for the noisy work, which will be done from 9 pm. to 5 a.m. Sunday through Thursday on a typical workweek. People will be able to sleep on Friday and Saturday nights.

According to Steve Welborn, public information officer for CalTrans, “We will start on June 1. The work will last through September. It won’t be the entire area, but a block or two at a time. We’re beginning on the East end of  Flora Vista and moving west to Broadway to do one lane in one direction. After a month they will turn around a do another lane moving east and that will take about a month.   They will then turn around again.” This will involve a total of four passes.

The pavement rehabilitation involves a different type of pavement then you normally see on a public road said Scarlett. “What this project is, is a different type of structural section. We are removing about eight inches of asphalt within the stretch of SR-78 and replacing it with six inches of large stone matrix asphalt, which would typically be used for airports or heavier vehicles.” He added, “Since we don’t have planes on the road the life of the pavement is going to be longer, because it’s a lot stronger.” The top two inches will be rubberized asphalt, which will also improve ride quality and extend the life of the section, said Scarlett.

“We’re coming along at a good clip and we remain on schedule,” he said. “A very important part to relay to the public is that a very noisy part is coming. We’re sending out mailers to about 3,000 homes. In addition, we will do wall hangers, both in Spanish and English. To make sure everyone is aware when it’s happening.”

Each evening they will do 2-3 blocks. Go to this website to see when work is being done in your area: dot.ca.gov/caltrans-near-me/district-11/current-projects/sr78upgrades

Scarlett told The Times-Advocate, “The thing about construction is that things

change constantly. We are trying to be proactive and give people a heads up about what is coming down the pipeline. As far as what to expect.” The noisy part is when they do the grinding of the (AC) Asphalt Concrete. They will grind down eight inches and then pave back six inches and eventually put down two inches of rubberized asphalt pavement.

They will grind and pave the same night. The last two inches will be missing until they come back and finish it, but you can drive on it. When the rubberized camp is laid down, many weeks down the road, there will be significantly less noise.

Meanwhile Caltrans has gotten 95% of the reconstruction of curb ramps to comply with the Americans With Disabilities Act (ADA). This involved replacing 86 curb ramps. Scarlett said, “The contractor is now moving to the next phase. Electrical work has gone in as well.”

Many people ask why not do the noisy part during the day? Scarlett said, “They think that having a congesting issue is not as bad as not being able to sleep at night. As far as Caltrans is concerned, this type of work must be done during evening because congestion would be unacceptable.” It would also take longer and therefore cost more.