Caltrans Hwy 78 project in Esc. to include extensive upgrade 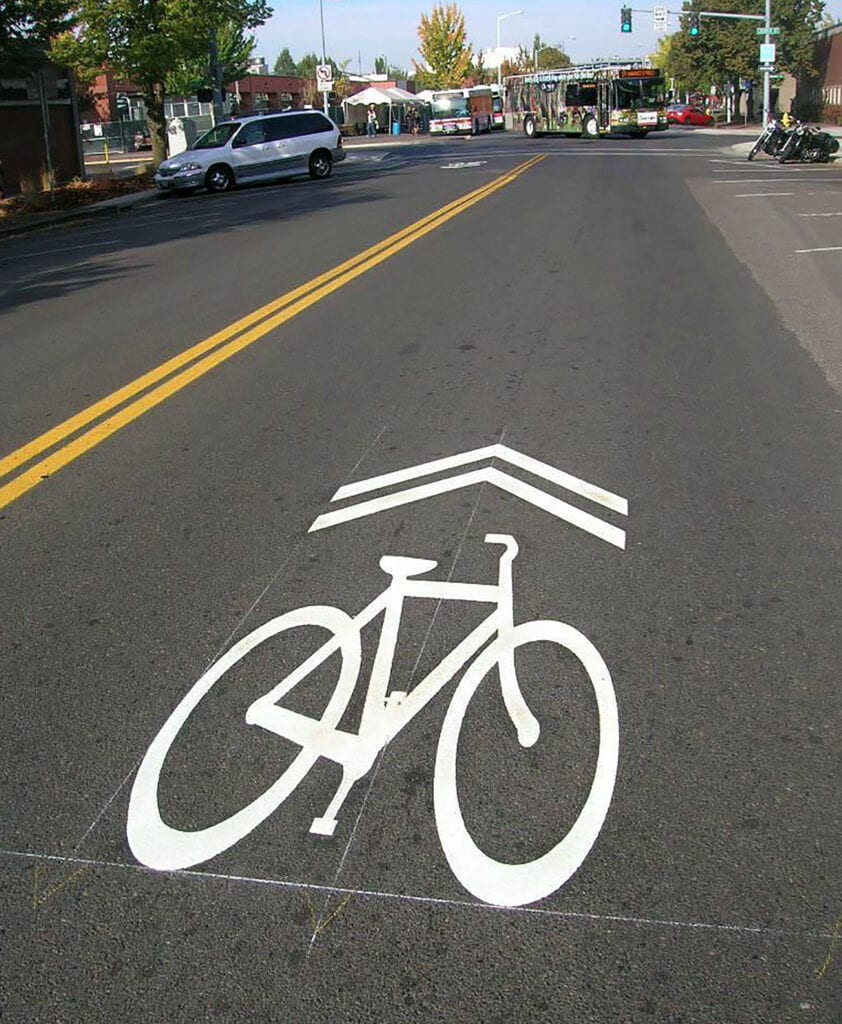 This is a “sharrow”; a lane meant for sharing between cars and bicycles. Sharrows will be created as part of the Caltrans project improving five miles of Hwy 78 that runs through the center of Escondido.

It’s been 15 years since Caltrans has been back to repave the five miles of Hwy 78 that run through the city of Escondido. The newest improvement, which has already begun, is expected to last for 20 years. The goal is a better, smoother drive.

When the project is complete, drivers with “smart” cars like Teslas will be able to “talk” to the road to, among other things, determine the correct speed to get the most green lights.

This week Caltrans Project Manager Kareem Scarlett talked about the $19 million project, which residents will be living with for the next few months—although most work will occur at late at night.

The project begins at Hwy 78 & Broadway, follows Broadway, down Washington, hangs a right on Ash Street and becomes San Pasqual Valley when it gets into the County, ending at Flora Vista, just after Summit Drive.

The $19 million project is funded through the State Highway Operation and Protection Program (SHOPP).

“It is quite an upgrade,” Scarlett told The Times-Advocate. “Typically for asphalt projects you like to get out here before the fifteen years. Usually you do it every 10 years. This one has been quite some time. Fifteen years was the expected life span when this was done.”

Scarlett explained, “For this project we are going to remove all of the asphalt and replace the entire asphalt section with a large stone matrix, similar to what is used on airports, in order to get more longevity in the pavement. This is not your typical rehab. Usually we would only take off 2/10’s of the asphalt, but this a full removal and putting it back. An extensive rehab.”

Caltrans will remove 6/10s of the asphalt, about 8 inches or so. “This work, with the additional removal, should last considerably longer, at least 20 years,” said Scarlett.

The new asphalt will be of “airport quality.” What does that mean? “A road of large stone matrix is usually used for heavier vehicles such as a plane that can take that kind of beating,” he said. “That is what we’re implementing through this section. It’s better because we won’t see the weight of the vehicles that people would typically see in an airport. It’s going to last a lot longer.”

He continued, “The reason we went that way is that at some of the intersections we noticed substantial rutting that was happening on the asphalt due to the heavy trucks. We were at first going to put down concrete at these intersections but the pavement lab recommended this. It’s like a reinforced asphalt section.”

The configuration of the intersection of Hwy 78 & Broadway will not be changing. “We are not adding additional lanes but the pavement will be refreshed along with the striping,” he said.

The Caltrans work crews will minimize traffic delays as much as possible, said Scarlett. “We are doing a majority of the work at night, between 9 p.m. and 5 a.m. to minimize disruption.

There will be still be two direction flow as the work is progressing. We don’t anticipate any kind of huge impact to traffic—so no detours will be needed. The major stuff will happen during pavement replacement.”

Currently the crews are working on the ramps and signals and putting in the bike lanes.

As part of the project they will be doing “a host of things,” said Scarlett. “We are reconstructing eighty-three curb ramps to make them ADA compliant, and doing signal improvements at twelve intersections along the route.”

Safety improvements are also part of the project, including upgrading guardrails and updating the traffic stripping. “We are adding ‘sharrows’ painted like markers on the road that indicate to the drivers that this is a shared facility with cyclists.  So they can share the road,” said the project manager.

Lastly they will make tech updates and upgrades. “We will be laying some fiber optic line and implementing some V2I (Vehicle-to-Infrastructure) modules that talk to smart vehicles,” he said.

Scarlett said, “As one example, there is an app that can be used that will tell the driver what speed to drive at if they want to catch all the greens along the route. This will help improve the flow of traffic if you have multiple vehicles. This is already built into Teslas. This is just information sharing between in the infrastructure and the vehicle.”

Caltrans has used pilot V2I in San Diego County before, “but this is one of the few areas where this will actually be deployed.”

Scarlett added, “The other thing is, the traffic signals we will be installing will have ability to talk to each other, to help with flow. They control the timing of the green times or the red times and they are more in sync with what the other one is doing.”

They will also upgrade pedestrian systems as well, to make crossing easier. The push buttons and the pedestrian callers will be updated as well.  “These new versions will work a lot better than the ones that are out there now,” said Scarlett.

Tentatively, they are looking at completing the project by the end of October or the beginning of November. “All of these things won’t happen in every section at one. It will be done at different sections. There will be some sections that will be pretty free flowing,” said Scarlett. “My team is working to educate the public with news releases and fact sheets. There’s electronic signage so people know what’s going on.”

Ultimately, he said, “There should be a lot better, smoother ride and we think people will notice that.” He added, “The ride will definitely look nicer. I gave a presentation to the Rotary Club of Escondido a year and a half ago and they were very interested in this section and getting it rehabilitated because of rutting issues. The community is looking forward to this and I’m glad we are out there trying to get this done.”

He concluded, “Caltrans is asking for residents’ and motorists’ patience and to be mindful of those on the side of the road.”