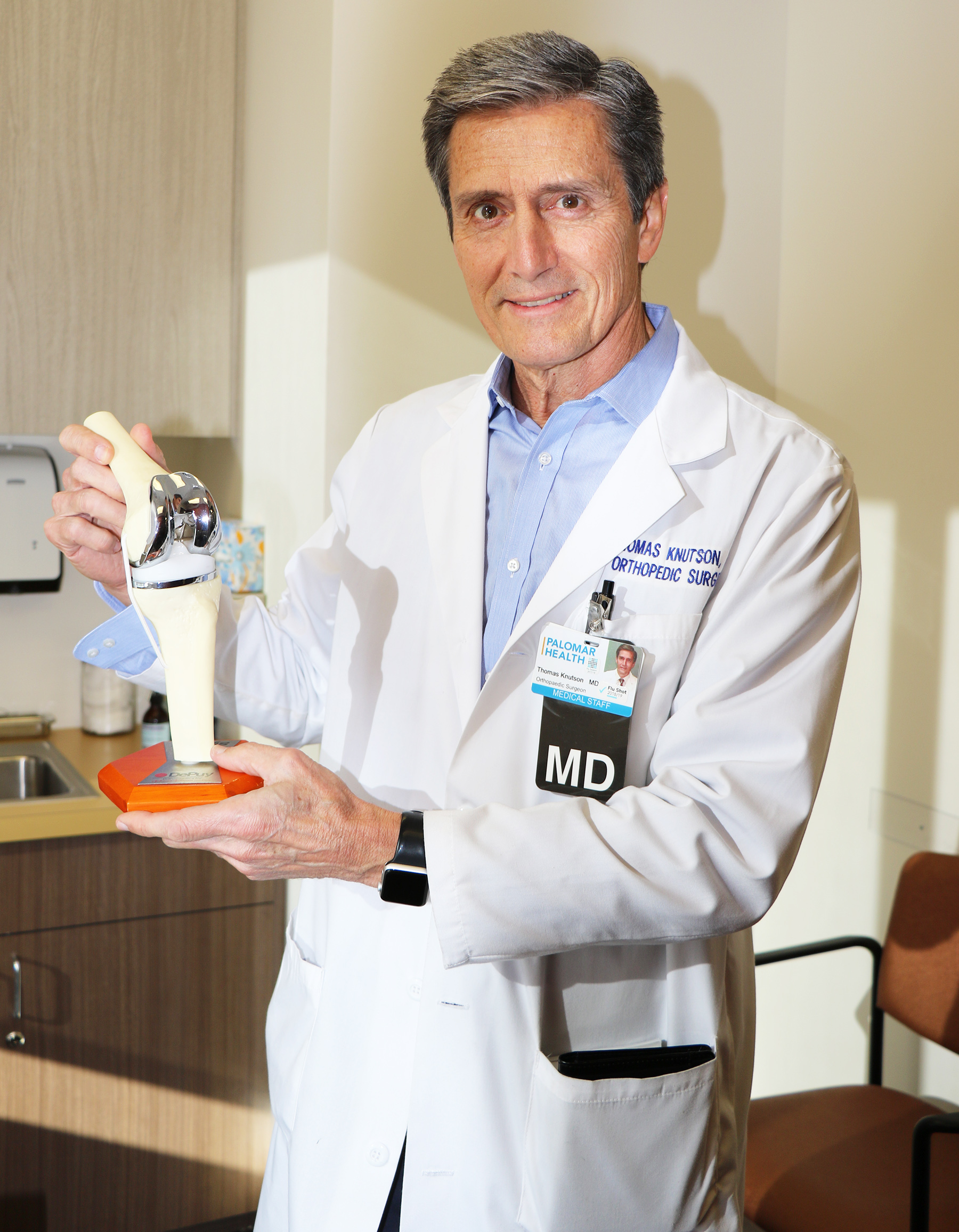 Dr. Thomas Knutson, who specializes in knee and hip replacements. He is the chief surgeon of Orthopedic and Spine Services at Palomar Health. “The doctor exudes confidence. He’s been doing this a long time. He specializes in knees and hips. He knows what he’s doing,” says a patient, Steve McCoy, whose knee Knutson replaced in October.

Steve McCoy, an active 69-year old, for many years lived with the pain of a knee injury incurred while playing high school football in the 1960s. Until finally he couldn’t take it anymore. He made an appointment with one of the most highly regarded orthopedic surgeons in the state, Dr. Thomas Knutson.

Four months after that surgery McCoy says, “My life is better than it was before. Having this done extended my active life by years.”

You might—like me—wonder exactly what “orthopedic” surgery is? The answer: surgery of the musculoskeletal system. Orthopedic medicine treats such things as arthritis and fractures of knees, hips, shoulders, the spine and disks.

As noted above, Palomar’s orthopedic section department is big—and growing. As the population ages, more and more adults will need to get types of surgery that are becoming so common that they are almost routine. They probably ARE routine for surgeons like Knutson, although it is doubtful that patients will ever be nonchalant about such procedures.  At the same time many adults are electing to get such surgery earlier rather than waiting as long as possible. Doctors no longer advise patients to wait as long as they can to get knee replacement surgery.

As Brian Cohen, director of Palomar Health’s orthopedic and spine services puts it. “Younger people are getting these kinds of surgeries done. Why wait when you can do it now and increase the quality of life?”

In just the past few years, advances in both surgery and procedures before and after surgery have greatly reduced pain, and the need for dangerous and debilitating drugs like opioids. Patients are spending fewer nights in the hospital after surgery. Nurses and physical therapists are getting them up almost as soon as they have awakened in the recovery room.

“People are surprised,” says Cohen. “They aren’t expecting to walk the same day as the surgery. They are surprised when they stand up and see that it’s really stable.”

“We stay ahead of the curve when it comes to pain control,” says Cohen. “There has been a big push to reduce opioids. Our goal is not just to take away the pain but to ambulate faster.”  For those of us not in the medical field, “ambulate,” means to walk. “We are trying to find a middle ground so patients can be up and around the same day.”

The average length of stay for hip and knee replacements is 1.74 day for PMC Escondido and 1.70 for PMC Poway. Scripps Green Hospital’s average is 1.80, 1.93 for Kaiser Foundation Hospital, 2.09 for Alvarado Hospital Medical Center, 2.17 for Sharp Coronado Hospital continuing to 3.90 for Sharp Chula Vista Medical Center and 7 for Rady Children’s Hospital. These statistics come from California’s Office of Statewide Health Planning and Development dataset.

Note: The source of these and other statistics come from the 2019 MedPar Dataset from Centers for Medicare and Medicaid Services accessed on HealthGrades.

For the past several years both PMC Escondido and PMC Poway satisfaction have been rated near the top of the scale for “Pain Well Control.” Last year the 99% of the time it was reported that pain was well controlled for total joint replacement surgery for PMC Escondido. “We want always” insists Cohen. “We don’t want to be the hospital where your pain is ‘usually’ controlled.”

McCoy—whose knee was replaced October 3—spent one night in the hospital. “As soon as I came out of surgery and recovery they got my leg moving,” he says. “I walked up around the bed. They get you up so you are not lying around developing blood clots. My surgery was early in the day. Before noon I was up. I was still woozy and I walked around. They got my leg moving and then moved me to a regular room.”

McCoy had suffered several injuries as a high school football player. He severed his MCL (medial collateral ligament.)  “I didn’t realize how severe it was. I had no retention,” he remembers. “They did surgery and got my knee back together in late 1966 and then five years later I had a second surgery.” Doctors removed his meniscus in 1972.

From 1972-2018 McCoy endured bone on bone on his knee. That means no cartilage was cushioning his bony parts as they rubbed together. He was an active man and for several years worked in pipeline construction. The condition of his knee didn’t limit him until recently. He had a handyman business until four years ago.

“It got to be very limiting,” says McCoy. “Cycling and walking was getting to be tougher and tougher. I waited too long to have it done.”

He adds, “I have to credit my sister-in-law, Eileen Drutman, who three months before me had a hip replaced by Dr. Knutson. I was in the queue for another surgeon. She convinced me to get a second opinion. I visited with Dr. Knutson. It was a no brainer. The location was a lot closer to where I live in San Marcos. It was a plus, plus!”

When McCoy walked into Dr. Knutson’s office, the surgeon told him his knee was in bad shape. “I can’t believe you didn’t limp in here,” he said.  He said McCoy’s knee was starting to move into the interior. “It had big calcium deposits and a golf ball sized build up,” recalls McCoy.

“The experience was excellent,” he says. “The doctor exudes confidence. He’s been doing this a long time. He specializes in knees and hips. He knows what he’s doing. They have a system that made it very painless. The way they conduct themselves, there wasn’t much to be worried about.”

Before the surgery McCoy was encouraged to find out as much about what was going to happen as he wanted to learn. “They had me not worrying about it,” he says. “That was the main thing. They have a system of software and online information. They said, ‘This is what’s going to happen. This is where you knee is. Ask us if you have concerns. There isn’t a lot to worry about.’ Communication really helped remove any angst I had. The care begins way before the surgery.”

Cohen describes how patients are educated with online and live classes, with one to two hour sessions, which are held on Saturdays. “There’s better communication with physical therapists.

According to Cohen, therapists quiz patients about their living conditions. Do they have stairs? Do they have a walker? They want to know what the patient will need to deal with after surgery so they can help prepare him or her.

Once he was released from surgery and after one night in the hospital, McCoy was given an option of home physical therapy for two to three weeks. “They give you a choice of who do you want to call to come and start your physical therapy. One of my choices was Palomar Health. Who else would I want to choose?” he says.

He was immediately contacted by his physical therapist and made an appointment. Physical therapy began right away. “I can’t use enough superlatives for the gentleman who works for Palomar, Cecil Brown,” says McCoy. “He has been doing it for more than twenty years. He knew before I knew what was going to happen. He got me up. Gave me exercises to do. Rubbed my knee and got my blood flowing right away. It continued for three weeks.”

Today, four months after surgery, McCoy is “doing great. After Mr. Brown released me I got two weeks of therapy at Gaspar Doctors of Physical Therapy in Bressi Ranch. I went in there a couple of times a week and they kept stretching me and increasing my range of motion and building strength.”

So improved is McCoy that he’s going to start up his handyman business again. “I’m riding my motorcycle again and my wife and I are taking multiple mile walks.”

Sure, preparation before surgery is important, but, says Cohen, “The skill in the hands of the surgeon make all the difference. Palomar Medical Center has a great group of surgeons!”

Dr. Knutson has been with Palomar for many years and he has been a surgeon for 29 years. His title is orthopedic medical director. And he is just one of many such surgeons on the 7th floor.

For Actual Complication Rate for total hip replacement, PMC Escondido’s rate is 1.25% compared to the national average of 4.89%.

For spine fusions PMC’s complication rate is 5.19% compared to the national average of 8.89%.

Dr. Knutson notes that advanced pain procedures have evolved greatly since 2014. One of the ways they avoid opioids is to begin giving anti-inflammatory drugs such as Tylenol before surgery, and continue after. “This has decreased the need for narcotics,” he says.  “We still use it, but we use less of it.”

Many aspects of knee replacement that are not related to pain management are largely the same as in years past. Such as replacing the knee with metal. The plastics have improved, which increases longevity, says Knutson. “But the alloys have stayed the same.”

Longevity of a knee replacement is about 15-20 years. It varies, depending on the size of the patient. “If you are a really big male who is young and active it won’t last as long as for a petite female. Of course, we don’t recommend they take up a high demand sport. But you can play golf or go horseback riding,” says Dr. Knutson.

Because PMC’s orthopedics department does so many surgeries, it has become like a well-oiled machine, which is something patients like, says Dr. Knutson. “We have a lot of experience.”