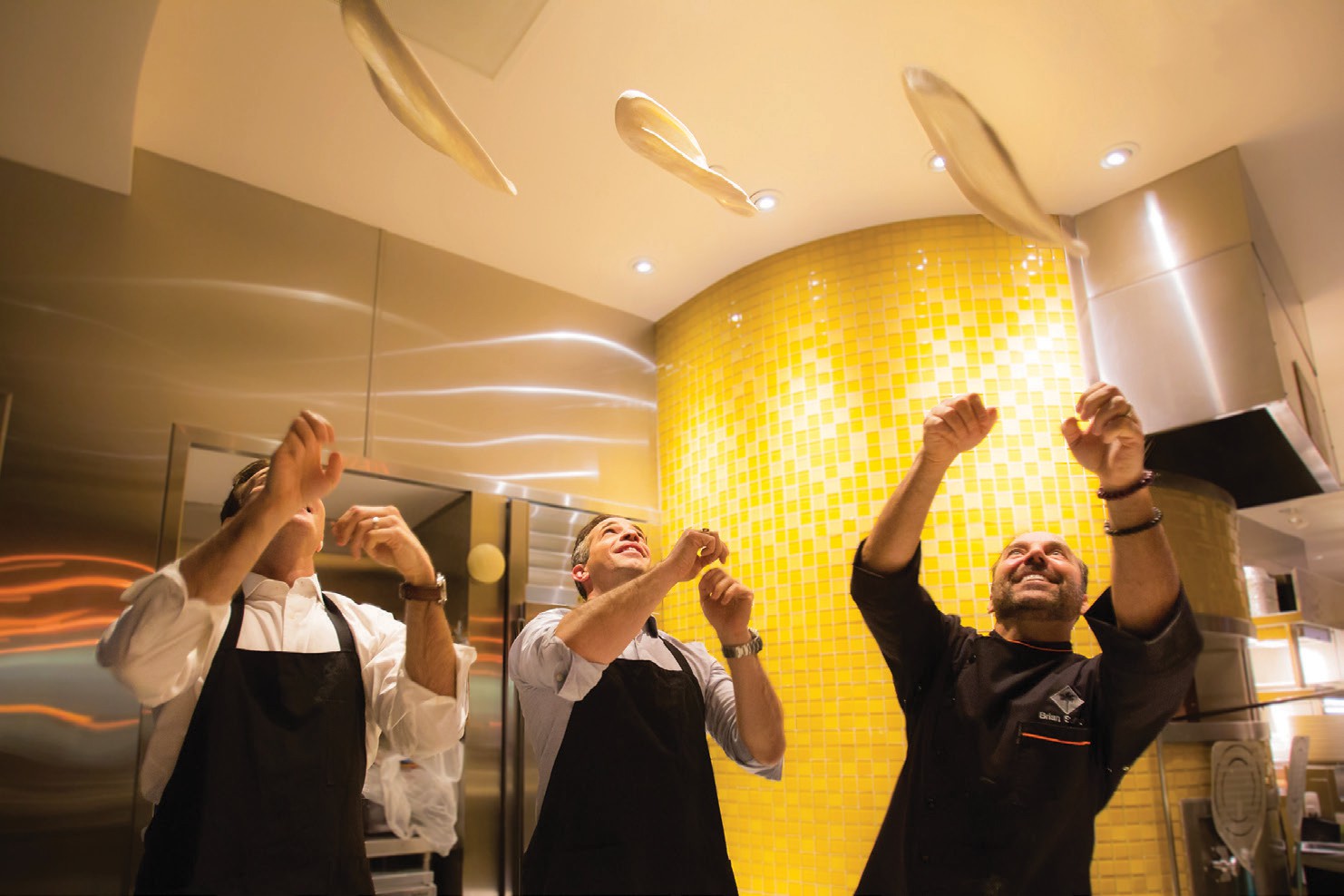 The evening ended with some lessons in pizza tossing from CPK Executive Chef, Brian Sullivan.

The new California Pizza Kitchen in the Westfield Mall January 11 cohosted with Ballast Point Brewery a lavish tasting event where this trendy eatery brought out some of its newest and tastiest offerings in a beer and food pairing night that demonstrated that CPK isn’t just about pizza.

This foodie fantasia started off with appetizers of Roasted Brussels Sprouts plus bacon flatbread, Spicy Buffalo Cauliflower and charred Shishito peppers — an East Asian pepper, paired with Piper Down 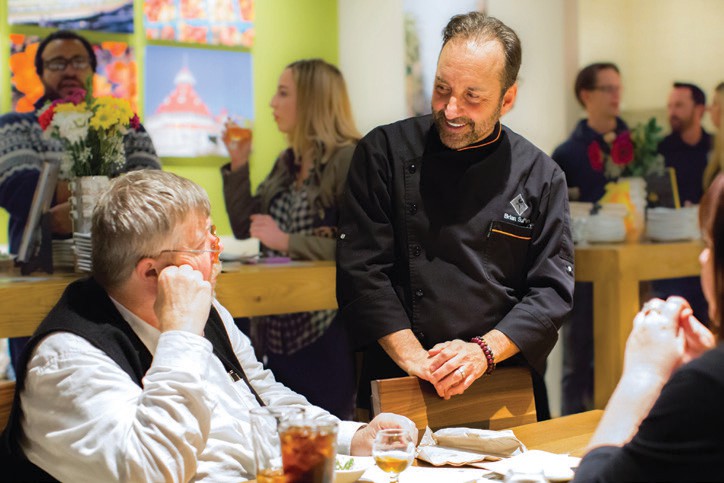 Scottish ale by Ballast Point. I found the peppers hot (I was hitting the ice water a lot) but very tasty. I was particularly impressed by the cauliflower dish which provided emphatic proof that you don’t have to be fattening to be delicious. The cauliflower florets were fried in a buttermilk batter, tossed with a homemade buffalo sauce and tasted remarkably like chicken — at least they had the satisfying feel to the palate of that meat.

During the evening CEO G.J. Hart dropped by my table and chatted about how CPK is changing its image somewhat to be not just a pizza restaurant, but a gourmet dining experience with 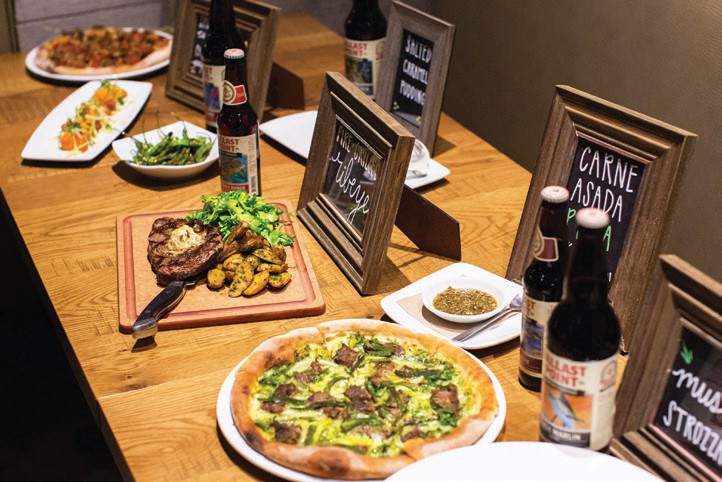 Just a few of the food and beer pairings with California Pizza Kitchen and Ballast Point.

a modern California chic that caters to the diverse population of our cosmopolitan region, a population that loves its tastes from nearly every continent — and its craft beers.

The food and beer pairings certainly proved that. The purpose of the evening was to show just how varied a menu CPK has. The appetizers were followed by a Quinoa and Arugula salad that include asparagus, sun-dried tomatoes, red onions, toasted pine nuts and Feta cheese tossed in Champagne vinaigrette. This low cal yet scrumptious salad was paired with Ballast’s Grapefruit Sculpin IPA. 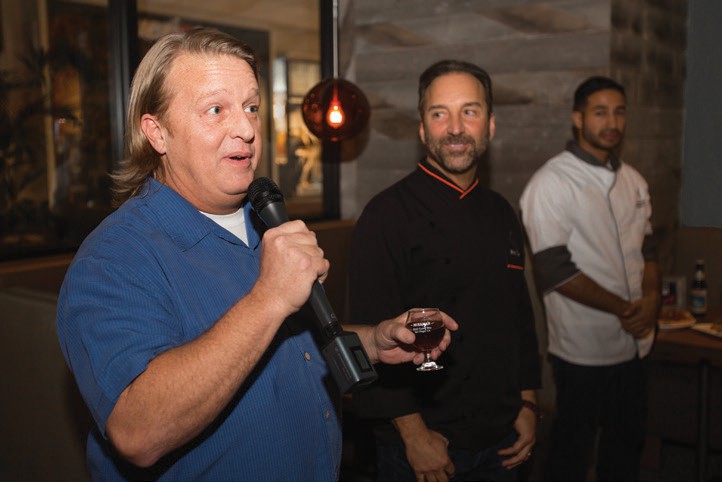 three cheeses, served with house made salsa verde and paired with an absolutely delicious Cinnamon Raisin Commodore American stout, which turned out to be my favorite beer of the evening (I like my brews like I like my bread: dark and hearty.) The other pizza of the evening was my favorite, the Mushroom Pepperoni Sausage pizza made with Cremini mushrooms, rustic pepperoni, spicy Italian sausage, fresh torn basil, Mozzarella and oregano. This was paired with California Kolsch German-style pale ale.

The next course was a Wild Mushroom Strozzapreti pasta, made with rolled pasta noodles with pan-sautéed Cremini, Portobello and seasonal mushrooms. This was probably my favorite offering of the evening 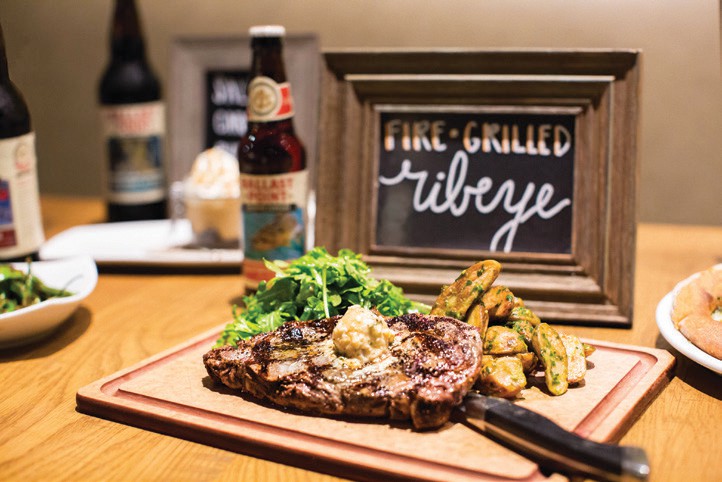 and it went well with the Black Marlin Porter. In case you are wondering, the pairings were in very small glasses!

The main plate was a fire-grilled ribeye, but I opted for a Hearth-Roasted Halibut, roasted on a cedar plant with grilled asparagus and butternut squash farro and baby kale.

I couldn’t resist trying the desert: salted caramel pudding that was paired with the Victory at Sea Imperial Porter.

To recap: If you want to combine some fine dining with trendy California style cuisine, California Pizza Kitchen is definitely your place. And you don’t need to dress up to dine up!