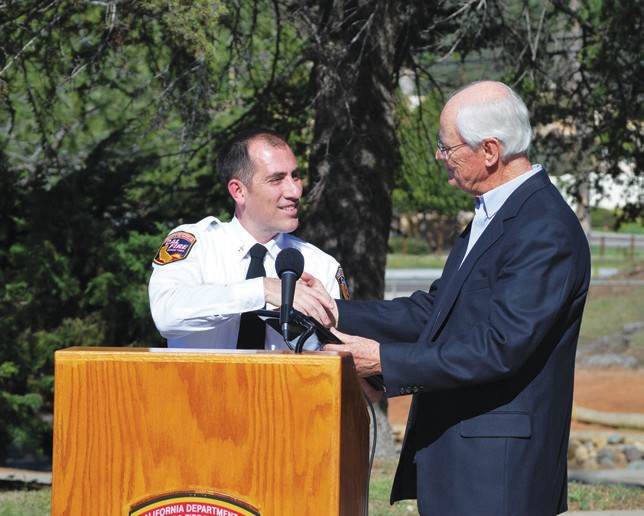 Ken Pimlott, chief of Cal Fire, gave the Deer Springs Fire Safe Council a Partnership award for the council’s activities promoting regional fire safety. The council is one of three Partnership Award recipients for 2014, and it is one of only two fire safe councils ever to receive this honor.

“We’re very humbled and very pleased to accept this on behalf of the Fire Safe Council. It came as a complete surprise to us, and I have to say that it’s a very, very tremendous honor for us,” said Cook in accepting the award. “I want to thank our community in particular for being there after all the years that we’ve been in the Fire Safe Council. Without the community support, we wouldn’t be here.”

“The Deer Springs Fire Safe Council understands . . . that the problem of wildland fire is it pays no attention to political boundaries and jurisdictions and district lines,” said Amestoy. “So they’ve adjusted their view to kind of thinking the same way, branched out beyond their mandate and looked at how they can assist in ways that are regional, cooperative and integrated. To me that’s the spirit of this Partnership Award. That’s why I took the time to nominate them to the director of Cal Fire, and I was pleased to see that they were successful in receiving that award.”

Horn, who also attended the presentation, said that the Fire Safe Council has established a track record of reliability over the past several years, which was why he trusted the council to manage the grant and see that the equipment was installed.

“We’ve done a lot of projects together over the years,” said Horn, who represents North County’s Fifth District. “I’ve worked with Craig Cook a lot. I trust you guys.”

Founded in January 2004 as a nonprofit community service organization after the Cedar Fire devastated San Diego County, the Deer Springs Fire Safe Council has been active in educating residents of the Deer Springs fire district about the dangers of wildfire. The 47-square-mile district includes parts of Valley Center and Escondido, as well as Hidden Meadows.

The council’s status as a 501(c)(3) community service organization enables it to apply for grants that it applies to fire safety and education projects. The council has attracted more than half a million dollars to the district that has been used to reduce fire danger, educate residents and improve lifesaving equipment.

The council conducts several activities that are designed to educate residents and reduce the fire threat in the district, including:

• An active chipping program that reduces combustible brush throughout the district.

• An emergency communication system that informs residents about possible threats caused by fires or other emergencies. This automated system alerts residents who have signed up for the service.

•A call-in hotline that is updated regularly with recorded messages that residents phone to learn the status of ongoing events, such as the wildfires that struck San Diego County in May 2014.