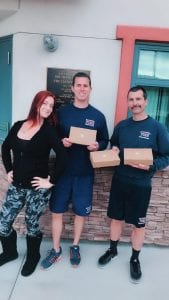 It’s a cross between a cookie, a brownie and a cupcake—all in one. It’s called the “Cakie” as in Cakies Creations, a recently born business in Escondido that can deliver its sweet morsels to your birthday parties, weddings, anniversaries, you name it.

If you don’t want to wait for a special occasion you can seek them out at local farmers markets, including the Escondido Farmers Market on Tuesday afternoons and the Scripps Ranch farmers market every Saturday. You’ll also find them at various other events around the county such as the Ramona Air Fair and Fly in every October.

Cakies Creations are the inovation of three siblings from Hawaii, the Fiji Islands and Micronesia: Briana, Chandra and Nick Pryor. “My sisters are the creative ones,” says Nick. “They have that culinary skill. My background is business and marketing. I pushed them to start a business.”

Nick has his own business: Clue Avenue Escape Rooms, which is upstairs from Vinz on Grand Avenue. He has been in business for about a year and a half.

A couple of years ago they began playing around with different flavors and bake mixtures when they came up with something that they all liked. They were small, but very moist and intensive in flavor.

Originally, they were going to call their treats “Keikies” the Hawaiian word for a small child, or baby. “We mangled the word into ‘Cakies’ because we figured that more people would get it,” says Nick.

“They are very addictive and the peanut is my favorite,” says Nick Pryor.

Their first event was at the Heritage School in Escondido. “It was so well received that we just kept moving on!” Last fall they decided to shed all doubts and fly. 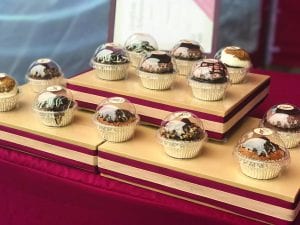 In some Cakies ways are better than birthday or wedding cakes because you don’t have to cut them. They come in perfectly packaged sizes in packages that keep them moist and delicious.They do weekly giveaways on their Facebook page. The way the contest works is that they show part of an identifiable place in Escondido. They gradually reveal details of the photo and the first one to figure it out wins the prize.

As we said earlier you will find them at all sorts of events around the county. “We pop in all over the place,” says Nick Pryor.

True entrepreneurs, they work out of a public kitchen in San Marcos they rent time on. They bake 20-30 dozen Cakies a week and plans are to expand. “At some point we hope to be able to handle online orders,” Nick says. “But until then we do catering!”

They hope their fellow Escondidans will embrace them. “We are three siblings who live and work in Escondido. We support local business. We love Escondido. We want to let people know how delicious these Cakies are.”