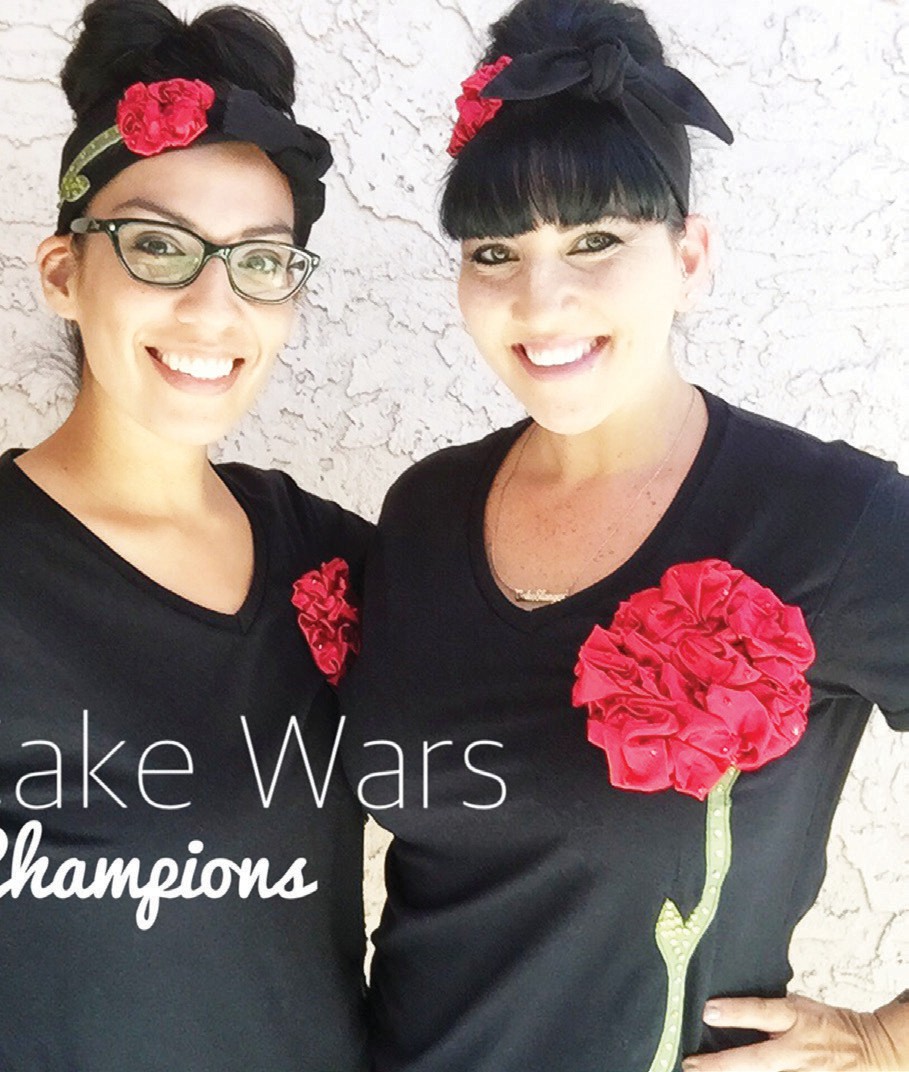 If you go looking around Escondido’s bakery district (don’t, because there isn’t one) you won’t find Little Hunnys Cakery because Caro is currently working out of her home bakery. She is married and she and her husband, Carlos, have three children, ages 10, 7 and 6.

Little Hunnys is a licensed home bakery, whose business is mostly conducted online, although you can certainly call her at 760-492-4540. You can also reach her on Facebook or Instagram or by email (see below.)

When we invited her to our Valley Center office to do the interview for this article, Caro brought two-dozen cupcakes made from her award-winning recipe to share with our staff. We can attest to their goodness!

Caro moved to Escondido when she was 10 years old. She attended Rincon Elementary School, Escondido High and Palomar College. But she was a young woman in a hurry who wanted to start working right away.

“I always liked baking, although I didn’t really think that would be a business for me, but it just sort of fell into my lap,” she recalls.

The name “Little Hunnys” has a story behind it. Before she had her cake business, Caro used to make diaper cakes, which is where you take diapers, roll them up and stack them to look like a cake. These “diaper cakes” are employed in baby showers.

“When I was doing that I used to call the babies and little kids ‘little hunny,’ ” she told the Times-Advocate. “When I switched to cakes I wanted to keep the name, but I knew that if I only called it Little Hunnys, people wouldn’t know what I was selling. So I added ‘cakery’ to the name.” So Little 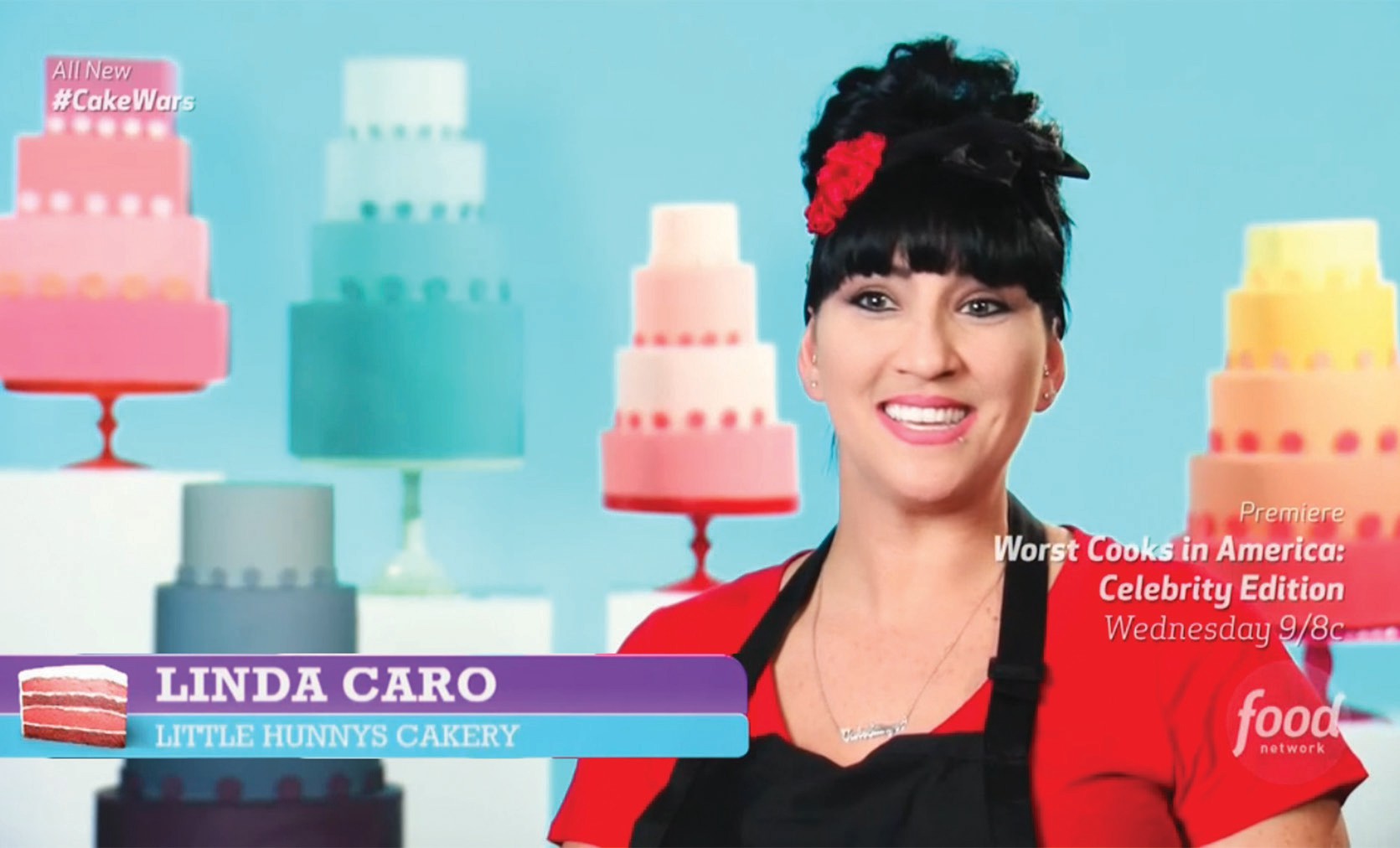 When you win something like the Cake Wars, you get turned into an instant celebrity.

Her appearance on “Cake Wars” was the first competition she has taken part in since she started her business five and a half years ago. The production company Superdelicious actually found her on Instagram and contacted her. “I think they contacted me because I have a lot of followers on Instagram,” she says.

They asked Caro if she wanted to compete. There was no fee, but she needed an assistant, so she chose her “cookie girl,” Alicia Becerra. “I asked her and I was a little nervous about her saying yes, but she did, and I had my assistant!”

Super-delicious asked Caro and Becerra to submit a casting video, a video where they would say their names and talk about why they would be good for the show. They did and shortly thereafter they got their contracts in the mail.

It may be a one-hour show, but it took a grueling 12 hours of videotaping at Paramount Studios in Los Angeles this summer.

“They provide you with a kitchen but you have to bring your own pans and tools,” she said. “Alicia brought her hand painting brush and edible paint to color the fondant.”

In the first round each team was giving a set of ingredients to work with, although they were able to change them up a bit. Some of the main ingredients they could choose from included peanut butter and jelly, grilled cheese and fish sticks! They chose mac and cheese but changed from cheddar to mascarpone, which is an Italian sweet cheese used in desserts. They made a sweet mac and cheese filling for a brown sugar space cake. And won the first round!

The show first aired on September 12 and will rerun again on October 1. And if it’s like other shows on the Food Network, you will be able to see it in rotation for several months—if not years.

A lot of friends and customers of 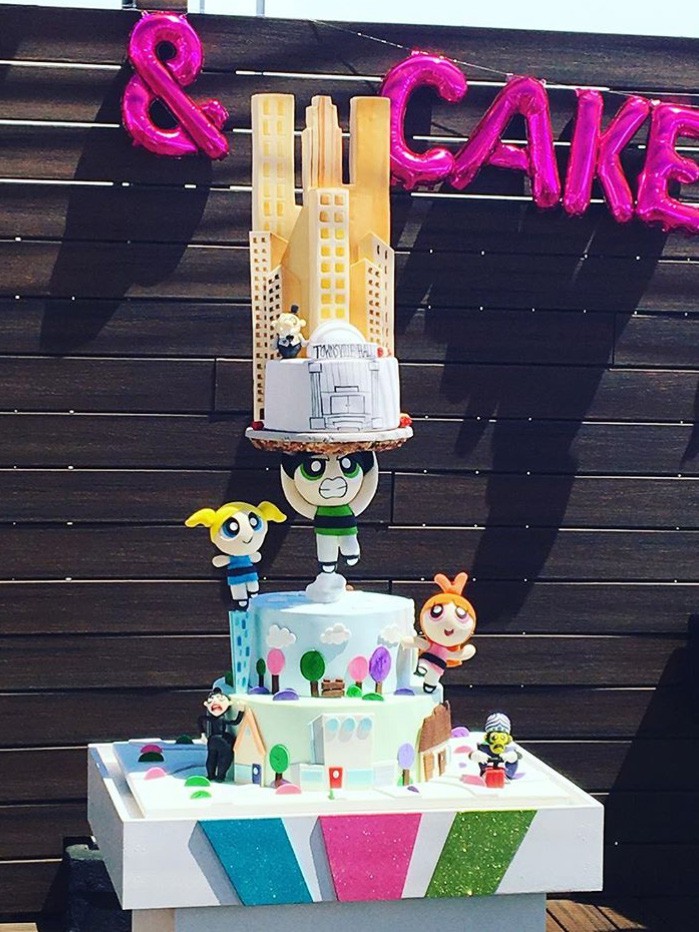 The winning cake in all its final glory — shortly before being eaten.

Hunnys have seen show. “A lot of people have been posting little clips of the show and they are really excited for us. Some of my customers have seen the show and emailed me and said they were so happy for me. We have gotten a lot of support,” says Caro.

If you’re interested in trying one of Caro’s creations, it’s easy to do. She does everything that you’d expect a cake baker to do, including birthday and wedding cakes. Although March and September (thanks for taking time from you busy month to visit our office!) are very busy for weddings, it’s actually becoming more and more common to see weddings spread out over the rest of the year.

But Caro has never had a challenge to match the challenge of Cake Wars. “I think this was the most challenging because of the time constraint because we only had four hours to do a cake of that magnitude.”

The judges were pastry chef Waylynn Lucas and Beverly Hills luxury pastry chef Richard Ruskell and the three voices of the Powerpuff Girls, of the Cartoon Network.

The cake they made included a representation of “Townsville” from the Powerpuff Girls. They made the tower out of rice cereal treats, covered in fondant (a sugar dough) and then painted.

They ate it at the party that followed.

Asked to envision what other worlds she might want to conquer in the future, the chef mused and then said. “Well they do Cupcake Wars Champions, which is the best of the best competing. If they ever do Cake Wars Champions, I’d love to compete. Other than that I’m going to work on doing a food truck!

She donates organizations to Cakes Against Cancer for Kids and Icing Smiles. Those are two she donates to.