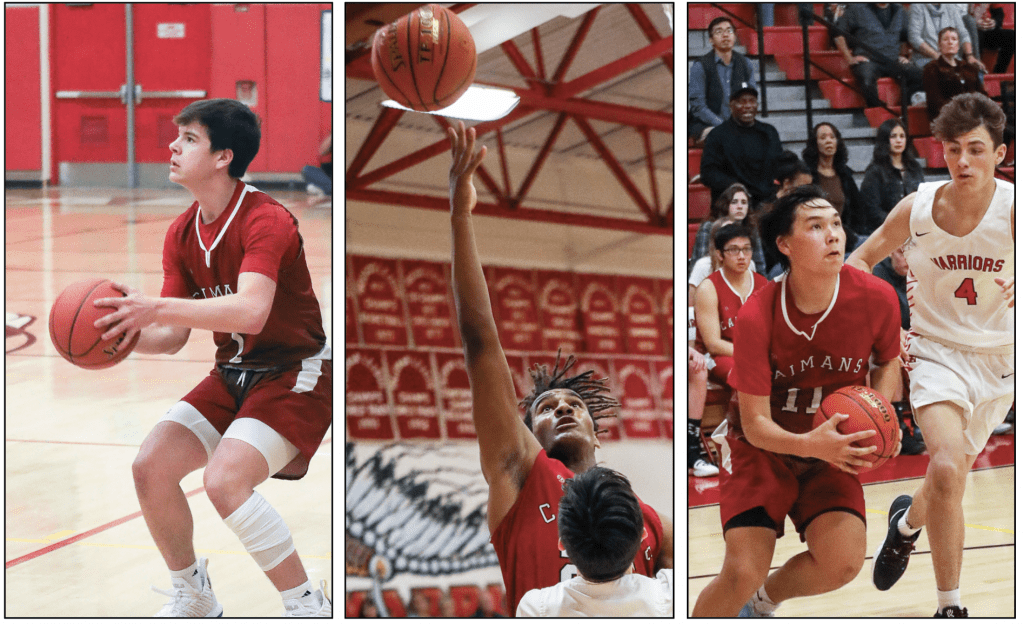 (From the left) Presley Bruskotter, Maximus Brown and Luke Choy (all shown in a game versus Fallbrook) were big contributors to Classical’s title win over local rival Calvin Christian. Photos by Lenny Kerbs

After all, these were two teams that had shared an Ocean League title with 7-1 records after having split a pair of meetings during the course of the league season.

So the spine-tingling finish of the Caimans’ 42-41 victory over the Crusaders felt as if it was almost to be expected if not downright preordained.

It was left to Classical’s go-to performer Maximus Brown to seize the moment after a late timeout had been called. Accepting an inbounds pass, Brown hustled down the length of the court and after challenging Calvin’s big man Martin Gumwel, Brown converted on a layup that that knotted the count at 40 all. And having drawn a foul on the play, the talented senior then stroked a free throw with 1.4 seconds remaining to spell the difference in a contest that not only established their CIF supremacy but provided the Caimans with local bragging rights as well. Moreover, it marked the first time in school history that Classical had captured a section basketball title.

By virtue of their dramatic win, the 21-8 Caimans earned a berth in the State Boys Basketball Championship as a No. 12-seed on the right side of the bracket and will trek some 81 miles north to meet host Arrowhead Christian (17-12) in a first-round matchup this week.

As for the Crusaders of coach Eric Miedema, their splendid campaign came to an agonizing end at 16-8, all the while knowing that if they had managed to author just one more defensive stop, they would have been the ones celebrating a championship and still playing on.

Coming into Thursday’s fray, the No. 5-seeded Caimans were on a definite roll having won seven straight which included three wins in the playoffs while Calvin (a 3-seed) had a little momentum of its own, winners of four in a row and a pair of postseason triumphs.

But perhaps somewhat unsettled by the significance of the contest, both teams were unable to get into any sort of a flow during the first half. Neither club shot well; with the Caimans hitting only 9 of 33 from the field while the Crusaders were even more challenged, able to find the range on just 4 of 21 attempts. In fact, only two Calvin players scored before the intermission which saw Classical holding to a 24-12 advantage. But in fairness, the Crusaders didn’t have the impactful 6-10 center Gumwel at their disposal for much of the second quarter after he had picked up an untimely third foul.

However, the Crusaders outscored CA by seven in the third stanza and continued their push into the final quarter. And when Gumwel delivered a clutch tip-in with just 6.8 seconds left to put his side up by a 41-39 margin, it appeared as if Calvin was on the cusp of its first sectional hoop title since 2005. But alas, the athletic Brown had other plans in mind.

Despite being hindered by foul issues, the freshman Gumwel had been a force of nature, tallying a game-high 18 points to go along with a massive 21 rebounds and four block shots. His size, length and skill certainly had the Caimans scrambling at times. Also key to the Calvin cause were the notable efforts of juniors Brandon Nelson and James Jansma, both of whom came on strong to score 11 and 9 points respectively and combine for 13 caroms.

As for the winners, they were paced on the scoresheet by the steady and reliable Luke Choy, who came through with some big buckets on his way to 12 points. Bruskotter was next in line with his aforementioned 9 points, all of which came when the Caimans were creating some early separation.

And what of the versatile Brown you may ask? Well, he made his usual contributions in a number of other pivotal areas but as far as scoring buckets were concerned, he registered only a couple. But the last of those was absolutely humongous and will probably go down as the most memorable and significant basket in the annals of Classical Academy basketball.