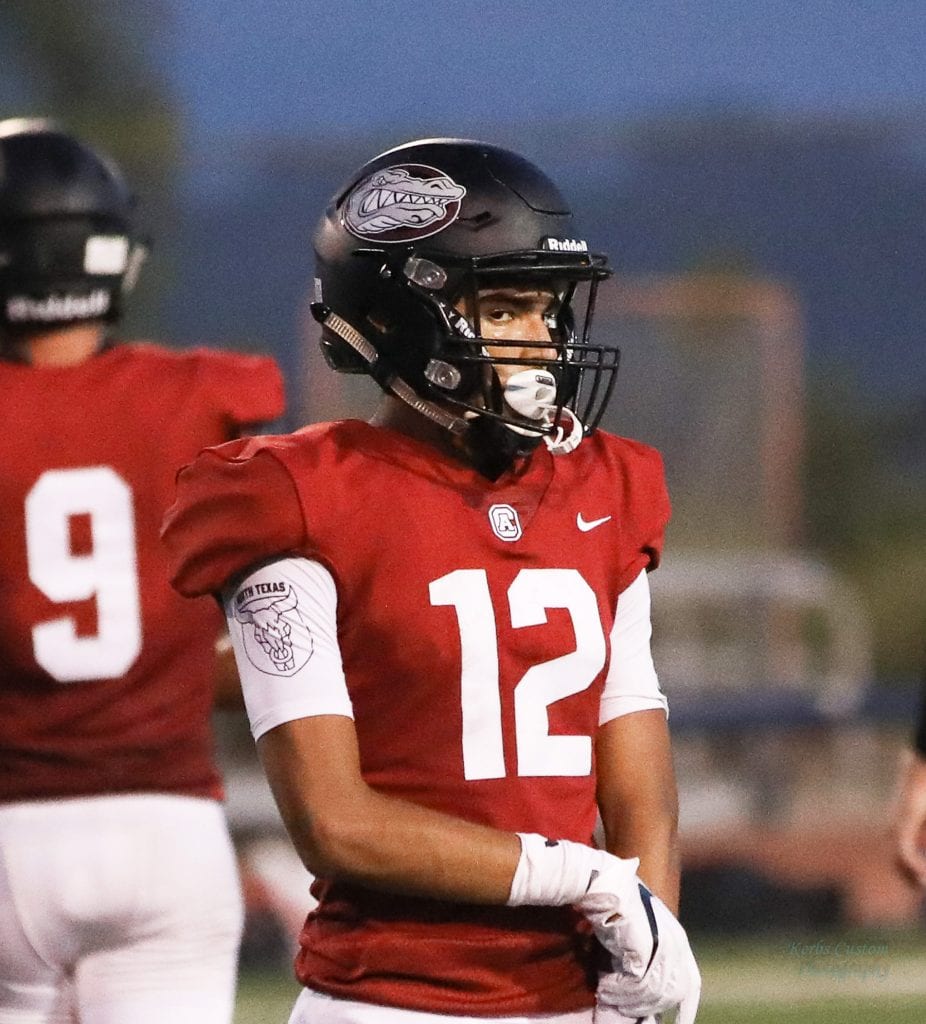 The versatile Diego Preciado had a big night in Classical’s big win over Calexico, tossing for two touchdowns as well as booting home six PATs. Photo by Lenny Kerbs.

For Classical Academy it was a rousing start to the football postseason.

However, for Escondido-based neighbors Calvin Christian and San Pasqual, what transpired on the gridiron amounted to disappointing ends to their respective 2018 campaigns.

Entering the playoffs, all three of these squads appeared to have, at worst, a reasonable shot of advancing beyond the first week of the playoffs.

In their contest against Calexico, the seventh-seeded Caimans were clearly seen as a solid favorite.

As for the Crusaders, the game versus the San Diego Jewish Academy figured to be highly competitive but one in which Calvin was considered to have a slight advantage.

San Pasqual’s situation was decidedly different and inarguably, much more daunting. Not only did the Golden Eagles have to go on the road to take on a formidable Mira Mesa team, but in southpaw and dual-threat quarterback Noah Tumblin, they would be facing one of the most electrifying players in all of San Diego County.

Let’s get to the good news first, that being Classical’s dismantling of Calexico. Scoring 14 points in the first quarter and eventually racing to a 28-7 lead, the Caimans had control of things throughout in a game that eventually culminated with a 42-7 CA victory last Friday night at Orange Glen High.

As the score would indicate, the Caimans (7-4) were dominant on both sides of the ball. In addition to converting six PATs, versatile senior Diego Preciado was every bit as effective with his arm as he was with his foot, tossing for a pair of touchdowns. And not surprising, Classical’s shifty and consistent running back Damian Castaneda was once again a force, rushing for 122 yards and a couple of scores.

By virtue of having easily dispatched Calexico, the Caimans earned the right to move on to the Division IV quarterfinals where the No. 2 seed Kearny Komets will await them down off the 163.  Oh yeah, that will be one heck of a challenge for Classical but if the Caimans can sustain to any degree the momentum that they generated at the Bulldogs expense, you’ve got to figure they’ve got a legitimate shot to keep their playoff dreams alive.

Entering its 8-Man contest with visiting SDJA, Calvin Christian (6-5) was armed with the knowledge that it had defeated the Lions earlier in the year albeit by a tight 16-10 count. But any confidence that fact might have given them was quickly wiped out when the Lions sprinted to a 24-8 first-quarter lead in the rematch.

For the rest of the encounter, Calvin was confronted with having to face an uphill battle. But to their credit, the Crusaders buckled down, manned-up and never said die. And after ultimately falling behind 36-14, CC embarked on a spirited comeback that, unfortunately, fell just short.

Then, things got really interesting when ace running back Evan Senti hightailed it some 74 yards for a long-distance jaunt. Moments later, the Crusaders found the end zone with another 2-pointer on the ground that drew the hosts to within 36-30 with plenty of time remaining in the final quarter.

However, despite having multiple possessions down the stretch, Calvin simply couldn’t penetrate the goal line for what would have been the potential game-winning score.

It was obvious to all those CC fans in attendance why this outcome shook out the way it did. In a nutshell, the Crusaders had just dug themselves too deep a hole to surmount despite their gallant effort to do so.

Though San Pasqual (6-5) hung tough and stayed within striking distance at 21-14 at the half, the 12 minutes after intermission would prove pivotal as the Marauders would score twice in that span en route to a 42-21 Division II triumph over the Golden Eagles.

As was to be expected, the acclaimed Tumblin was a huge factor in his team’s success, rushing for two scores and throwing for another. Showing that they could get it done on the ground, four of Mira Mesa’s touchdowns came via the run.

The G. Eagles knew going in that in order to remain close and spring the upset, they had to keep the turnovers to a bare minimum but that’s not how things played out. SP was victimized by three interceptions, including a particularly costly one late in the second stanza that led to a pivotal Marauder score that snapped a 14-14 deadlock.

San Pasqual’s most creative touchdown came on a nifty 49-yard hook-and-lateral that saw QB Trevor Jungman throw to wideout Johnny Mascari who in turn pitched the ball to running back Shawn Carter for the lengthy score. The G. Eagles also found the end zone on 4 and 12-yard rushes from Jungman and hardnosed Raymund Rodriguez.

Overall, it was another solid and winning season for the G. Eagles but their hopes of matching last year’s notable playoff run were not to be realized.