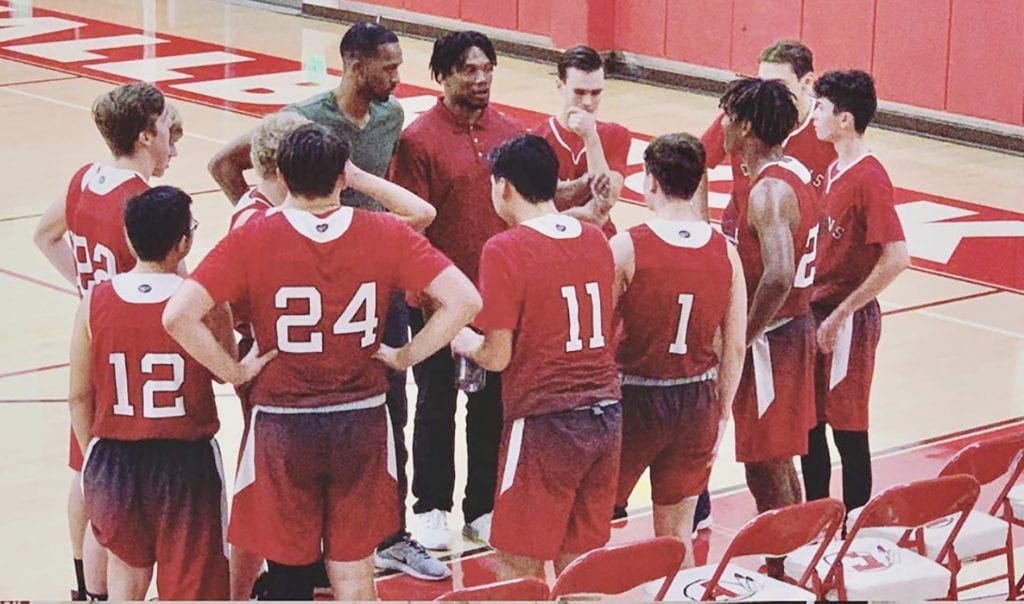 Don’t look now but the basketball program at Classical Academy is experiencing one heck of a revival.

Winners of just seven games last season, the Caimans have completely flipped the script and as this is being written, they are currently tied with Escondido High for the most wins in the city with an impressive total of 12.

Why the sudden reversal? Well, let’s do a bit of investigation to find out.

To begin with, CA has an approachable and savvy coaching staff in head man Chris Williams and assistant Brian McGlory who have seemingly set just the right tone.

As for the players, they committed to a lot of work over the summer including a conditioning program that is paying real dividends. Moreover, the Caimans underwent a mentality change that has resulted in a much better attitude and a more dogged determination.

And the genuine buy-in by the players could also be attributed to the fact that Williams has made an authentic investment in each and everyone of them. Rather amazingly, it is not at all uncommon for the coach to make sure that each member of his 15-man roster sees action in virtually every game. Doing that kind of extensive lineup juggling is no easy feat; so understandably his charges have positively responded to Williams’s all-inclusive approach. “The guys know that if they play smart, do the little things and give the effort, then everybody can work themselves into a role,” says Williams. “Do that and you’re going to play. It’s all about making the most of your opportunity no matter who you are.”

The Caimans’ success on the court has also been keyed by an effective 3-2 zone that they incorporate about 85% of the time as well as an adaptable offense that possesses plenty of sets and can offer a bunch of different looks. “Our offense is basically a menagerie of things,” says McGlory, “but it really just comes down to what the defense is giving us.”

With their confidence burgeoning and knowing they have the wherewithal to efficiently function as a group, the Caimans upside is considerable. And with belief, conviction and an increasing number of wins, comes higher expectations and corresponding dreams. “We’re looking at doing something special,” said Williams. “It all starts with doing well in league (the Coastal). And from there, getting it done in the Division 5 playoffs. I believe in the ability of our players to win games, whether they are close or not.”

Williams faith in his troops is also rooted in their consistency. Thus far, the Caimans (12-6, 2-0) have delivered two three-game winning streaks and three others that have lasted for two contests. Only once this season has CA lost consecutive tilts which speaks to its reliability game in and game out.

And make no mistake, Williams has talented personnel and interesting pieces at his disposal. Upon closer inspection, there is plenty to like about those that are currently donning a Caiman uniform.

In senior Noah Claxton, CA has a leader type who can do a little bit of everything and provides a most positive example. Viable at both ends of the court, Claxton is also known to have a good handle.

The trendsetter down low is power forward Alex Bunting. Armed with a polished arsenal that includes a nifty spin move, Bunting is considered to be one of the team’s best shooters. Especially dangerous underneath, where he can become a virtual scoring machine, Alex can also get it done on the boards because he chases down rebounds with authority.

When it comes to the versatile Maximus Brown, the Caimans have a bona fide standout. Very athletic and imbued with an intense motor, Brown functions as the team’s quarterback because of his sweet handle and knack for recognizing defenses and setting things up. Able to do it all whether it comes to scoring, hitting the glass or dishing off, Brown has Division 1 potential in the opinion of his coach Williams.

It’s rare when a freshman can make an impact but confident point guard Presley Bruskotter is doing just that. Rapidly adjusting to the varsity level, Bruskotter is a good decision maker and a splendid distributor who knows how to find the open man. But the true calling card of this gifted frosh is his remarkable sharpshooting that ranges all the way out to 25 feet.

Aided by a recent growth spurt and becoming ever more coordinated, Luke Choy is the consummate glue guy and someone capable of filling a variety of roles. Equipped with a great attitude, this small forward can be a force when he attacks the basket.

Veteran shooting guard Jordan De luca serves the Caimans as a productive sixth man. Whether he’s nailing outside shots, aggressively taking it to the rack or drawing charges, De luca is a vital contributor who brings with him an intense mentality.

Then there’s Nathan Benn whom Williams utilizes whenever he needs to get a pivotal stop. Or how about Sam Price, who has seemingly come from out of nowhere to make a mark? And based upon their notable efforts to date, Jeremiah Fernandez and Ian Clegg are others certainly worthy of mention.

Though the players are totally deserving of the accolades they’ve received, there’s no denying that Williams and McGlory have exerted tremendous influence on the team’s fortunes. Not only do they exude a relatable and with-it vibe to which the players readily respond but these two coaches convey the X’s and O’s in an easy-to-comprehend manner.

In addition, McGlory makes it known that both he and Williams welcome receiving input from the players—which goes a long way towards fostering genuine team harmony. “They realize that they have a say so,” says McGlory. “If they make a good point, we definitely are going to listen. We’re here to help them set a high standard for themselves and to get them better but we can learn from them as well.”

As for Williams – who played his high school hoops at Escondido under the esteemed Paul Baldwin – he truly values the synergy that exists between McGlory and himself. “It been a great relationship because we are able to feed off each other,” the head man explains. “We talk all the time, bounce some stuff off one another and then come up with a conclusion.”

While Williams usually takes the lead on the offensive side, it is McGlory who often makes the call on the defensive end. But their trust factor is such that any suggestion or recommendation regardless of which side of the court it deals with is accepted with respect and due consideration. “I would be much less a coach without him,” says Williams when it comes to his regard for McGlory.

So when you put it all together – a team that’s feeling it, players that believe, coaches that have a way about them and a momentum that seems to be reaching a crescendo – it’s no wonder the Caimans are on a roll.

And one senses that it won’t easy to stop them from here on out.