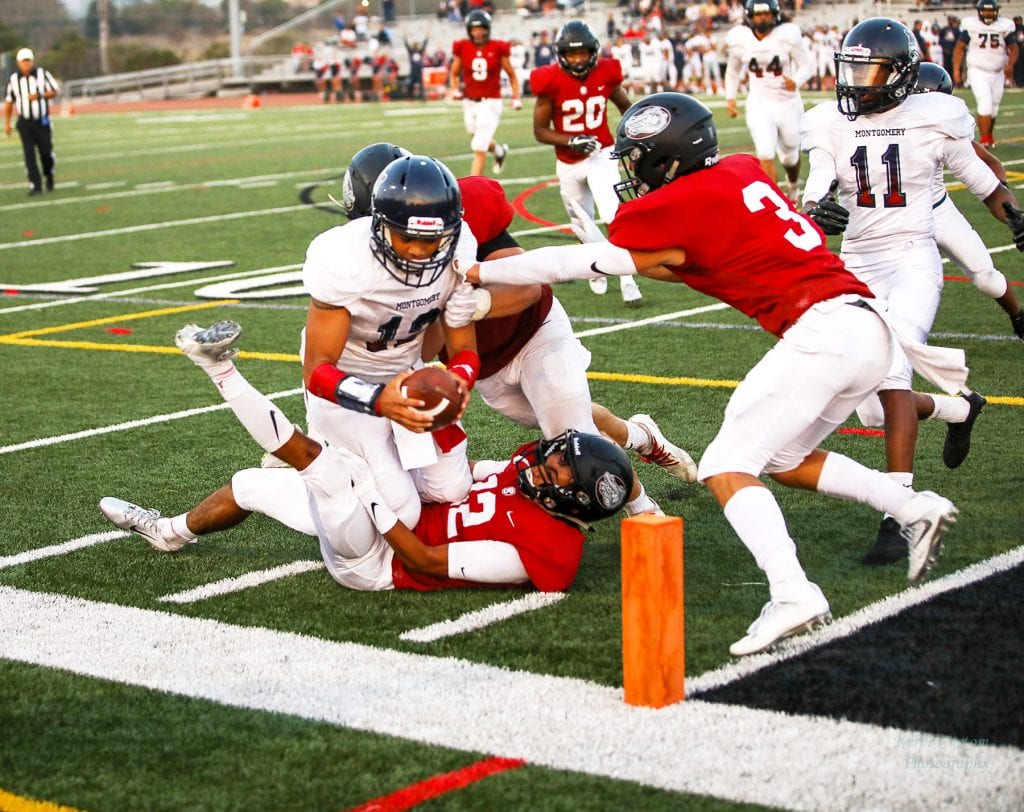 On August 17, the Classical Academy football team found itself on the island of Oahu, preparing to open its season in that faraway paradise against Waimea. Up to that point, the entire experience of having traveled to Hawaii and then being able to soak up the local culture had been a most educational and rewarding one.

But as for the game itself, that hardly measured up to what had preceded it. Somewhat caught off guard by both Waimea’s physicality and intensity, the Caimans endured a disappointing night while suffering through a 35-14 setback. Needless to say, the plane ride home wasn’t nearly as enjoyable as was the flight over.

However, fifth-year head coach Jon Goodman was encouraged to see that his team didn’t appear to be suffering from any sort of hangover or jet lag in the aftermath of that defeat. In the lead up to last Friday night’s contest against Montgomery that was held at Valley Center High, the Caimans delivered a great week of practice and gave every indication that they were primed for an immediate rebound.

So perhaps it was hardly surprising that’s exactly how things played out. Exhibiting more than sufficient offensive firepower and coming up with key defensive stands when needed, Classical put forth an admirable overall effort in outlasting a game Aztec team by a count of 24-18. 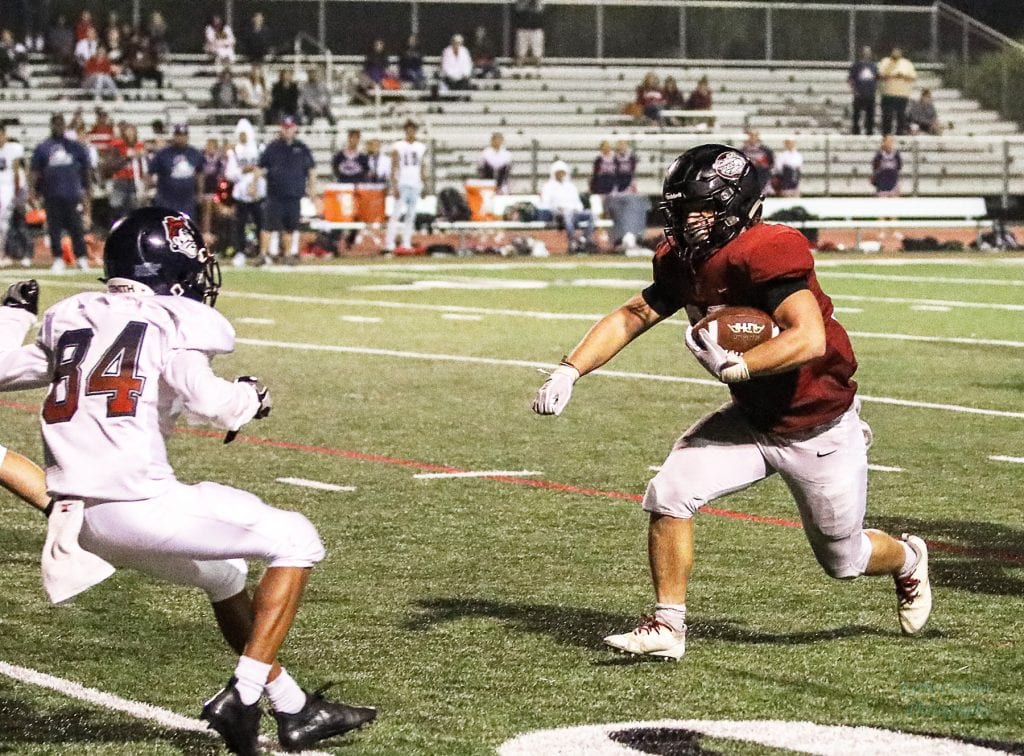 Demonstrating what Goodman described as “grit, resiliency and a willingness to continue fighting,” the Caimans overcame two deficits before breaking a deadlock and scoring the game-winning touchdown late in the third quarter. From there it was the CA defense that shined, keeping dangerous quarterback Keoa Gumataotao and company in check on their final three possessions. A nifty open-field tackle by Mason Pillsbury, an exquisitely timed pass deflection by defensive back Thomas Gehman and Jayden Bennett’s clutch stop and then tight coverage highlighted the Caimans’ stout defensive play down the stretch. Active linebacker Daelyn Pedroza was another defender who stood out, registering a team-high eight tackles, one of which resulted in a loss.

And not to be outdone by their teammates on the other side of the ball, the offense was certainly entitled to its share of praise and kudos. Fluid running back Damien Castaneda was a revelation as he weaved and dashed his way to a hefty 175 rushing yards. Meanwhile, James Duncan looked the part of a promising signal-caller while tossing a pair of well-executed TDs to impact receiver Aidan Sutherlin. The offensive line also did a notable job upfront in either paving the way for Castaneda or providing solid pass protection.

Set up by a first series of downs that advanced the ball some 45 yards and featured the productive running of Castaneda and Nasser Jones II, the Caimans were able to take an early 3-0 lead on the strength of a well-struck 27-yard field goal by the multi-dimensional Diego Preciado. This score then initiated a definite back-and-forth pattern to the game.

It would take the Aztecs less than than five minutes to respond. The athletic Gumataotao was at his mobile best on this 80-yard march, picking up 26 yards on three artful keepers and connecting on a trio of drilled completions to muscular wide receiver Dario Martinez that went for 31 more. Then operating out of a power backfield, Martinez did the honors when he took a handoff and wedged up the middle for a 1-yard TD plunge at the 2:32 mark of the first quarter. Now, it was the Aztecs who had jumped in front at 6-3.

But it wouldn’t take long before Classical answered right back. The dynamic Preciado got things rolling with a serviceable kickoff return out to the 37-yard line. And then on the very next play, Preciado wowed the crowd when he grabbed a hitch pass from Duncan and after making a sublime in-fake, he smoothly veered outside before finishing off this wondrous 47-yard catch-and-run with a sweet spin move. Shortly thereafter, Duncan found Sutherlin on a textbook crossing route and after getting a nice seal block that sprung him, the senior tight end hustled down the far sideline for a 12-yard tally that helped put the Caimans back on top at 10-6 just before the end of the first stanza.

That’s the way things remained until Montgomery required just three plays to strike paydirt a mere 22.7 seconds before the half. Taking over at his own 49, Gumataotao deftly lofted a floater down the middle to rugged tight end Agelu Meredith, who cradled it in for a 20-yard pickup. Moments later, Gumataotao zinged a bullet to Meredith who made like Atlas by carrying multiple defenders on his back all the way down to the 9-yard line. From there, Gumataotao wrapped things up when he spotted a wide open Alexander Dixie in the back of the end zone and lofted a spiral to his solitary receiver. Once more, it was the Aztecs with their noses in front 12-10 at the intermission. 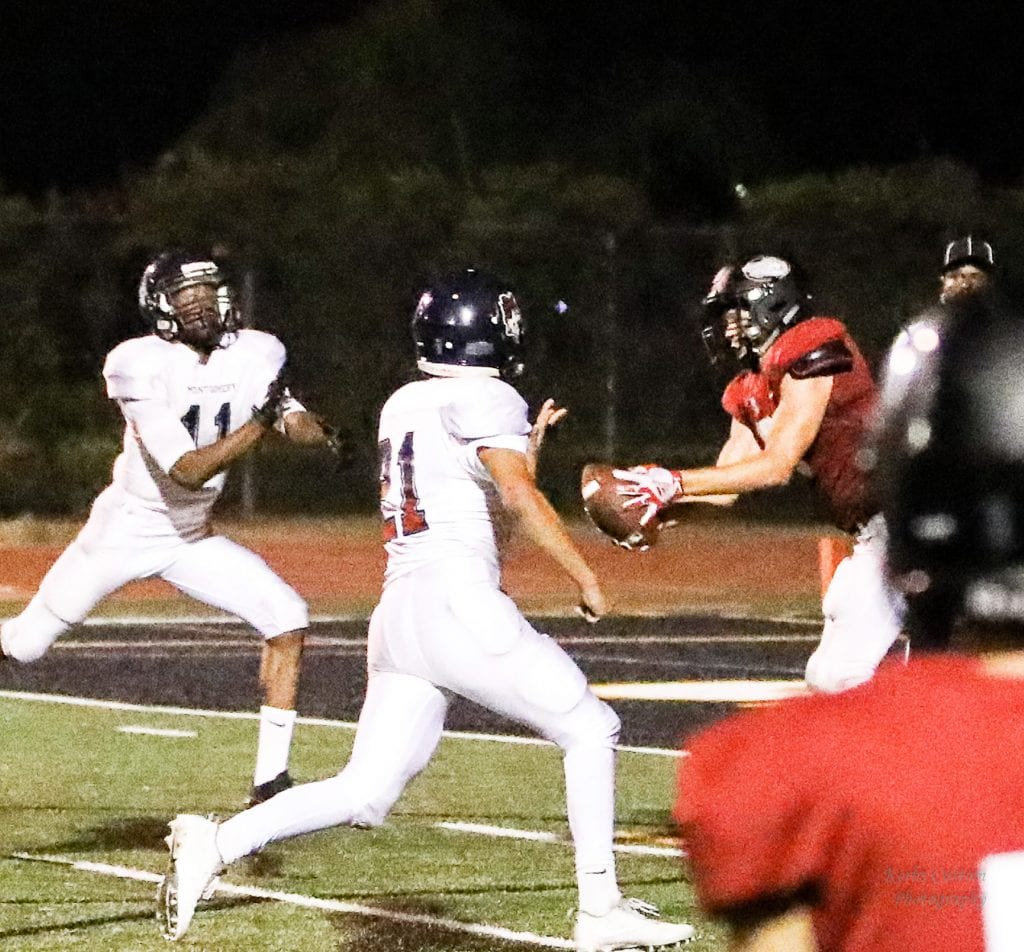 After getting behind the Montgomery secondary, Classical receiver Aidan Sutherlin latches onto the go-ahead touchdown pass from James Duncan.

However, that margin was destined to be rather short-lived as on their second possession of the final half, the Caimans retaliated yet again thanks to a 30-yard scoring scamper by Castaneda who burst up the middle, swung left and displaying good speed, got outside to the perimeter where no Aztec could catch him. And when Duncan, on the two-point conversion try, faked, bootlegged left and pitched an accurate toss to an all-by-his-lonesome Sutherlin, Classical was once more in business at 18-12.

And yet anyone who had observed the uber competitive Gumataotao on this night, knew full well this game was far from over as he immediately set about orchestrating another comeback push. Keoa would need just over four minutes in order to square matters. A clutch fourth-down completion to Meredith kept the chains moving while another zipped throw to his now favorite target netted a pivotal gain of 19 yards. Eventually from the 10, Montgomery’s slick QB rolled left and after snaking his way in and out, he encountered no resistance while strolling into the end zone with a tally that knotted things up at 18 apiece. Incredibly, the Aztecs missed out on a chance to claim the outright lead when they misfired on their third consecutive PAT attempt, this time because of an errant snap.

The question that now loomed was could the Caimans somehow outlast the indefatigable Gumataotao by putting up enough points that he wouldn’t be able to match? The answer came just 1:41 after what would be the Aztecs’ final score. Taking a gamble, Montgomery attempted an onside kick but Classical’s Gehman was wide awake and alertly recovered the ball at the Caiman 46.

From there, the versatile Preciado – who had rotated in at quarterback as a change of pace – netted 11 yards on a productive run to the outside. The Caimans then got 14 more when Castaneda quickly hit the hole and burst up the middle. But on the very next play, Preciado took a hard hit while cutting back that kept him down on the ground for a concerning period of time. Thankfully, Preciado eventually got to his feet but he had sustained a laceration to his chin and would experienced muscle spasms in his neck, both of which combined to keep him on the sideline for the balance of the game.

But two plays later, the Caimans picked up for their injured teammate in a big way when Sutherlin got behind the Montgomery secondary and expertly reached back for a 26-yard scoring toss from Duncan. And though 14:37 still remained to be played, there would be no more scoring as Classical’s now 24-18 margin would stand up to be the final score.

The Caimans did have a most promising opportunity to put the game away well into the fourth quarter when they penetrated down to the Aztec 6-yard line but a costly fumble short-circuited what had been an impressive drive.

But no matter. Classical’s defense was plenty clutch as it kept Gumataotao contained and held Montgomery off the scoreboard when it mattered most.

In the immediate aftermath of the victory, Goodman was more than happy to salute his team. He was pleased with the play at quarterback, loved the way that Castaneda and Sutherlin had stepped up and took note of the earnest effort of the offensive line. And though the defense had made a few mistakes during the course of night, he praised the way it kept battling and “how it responded” when things reached critical mass.

So though the result over in Hawaii may not have been satisfying, the one at Valley Center High more than made up for it. Classical’s stirring win over Montgomery enabled the Caimans to enjoy a bit of paradise back here in the States. 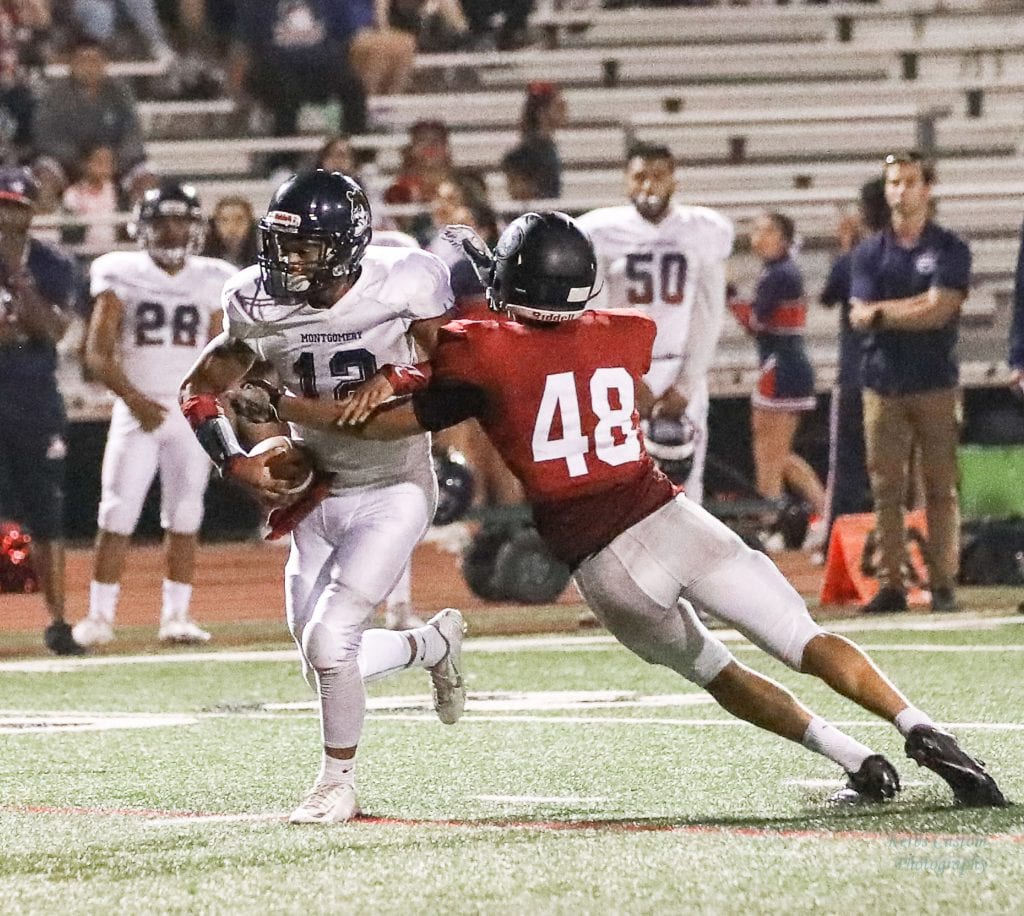