Caimans continue to mow down the opposition 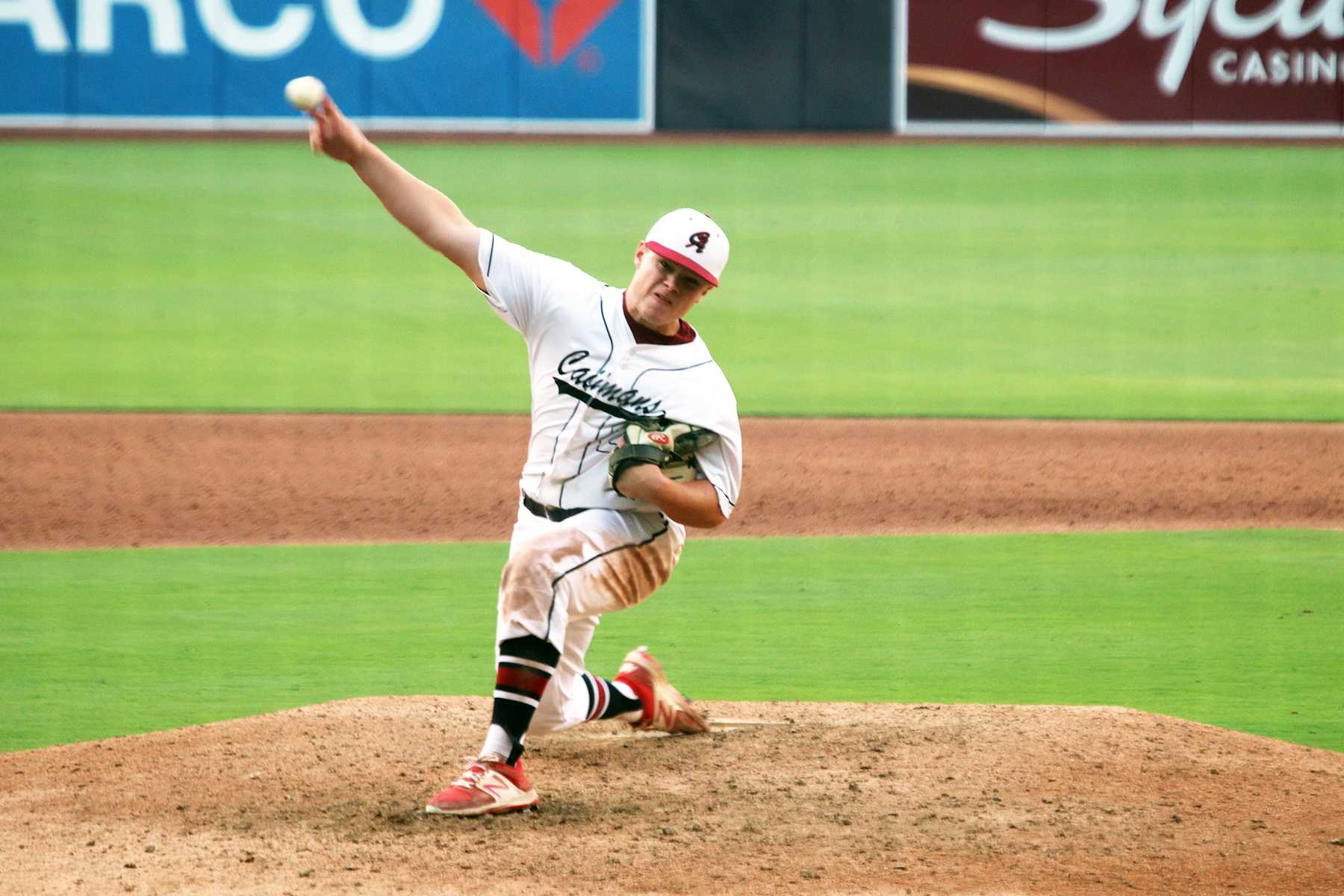 The versatile Tim Boshaw has been a main cog in CA’s diamond success with his contributions coming on the mound as well as with the bat.

Classical Academy’s 2019 baseball season just keeps getting more remarkable with each passing day. What’s more, the Caimans show absolutely no signs of slowing down or letting up. Right now, they are munching on the opposition with the same kind of efficiency as their namesakes do with their prey.

Winners of eleven straight games, the owners of a stellar 21-3 record and currently ranked in the Top Ten of the San Diego Union Tribune Prep Poll, the Caimans of Coach Ron Sisler are sounding a clear warning that come playoff time, they have the wherewithal to not only maintain their juggernaut ways but perhaps run the table en route to a coveted CIF title.

Sizzling doesn’t even begin to describe how hot the Caimans have been of late. Unbeaten since April 6, CA not only stands atop the Coastal League with a perfect 6-0 record but is also the pacesetter in the County’s Division II standings. During their current unbeaten streak, the Caimans have held the opposition to one run or less on six occasions while winning six games by a margin of five or more runs. Now, that’s what’s called getting it done both on the mound and in the batter’s box.

Other numbers give further indication of what an extremely high level at which the torrid Caimans have been operating. Unvanquished at home (7-0), Classical has been nearly as potent on the road or at neutral sites while carving out a splendid 14-3 ledger when playing away from home.

Of CA’s most recent achievements, perhaps the most notable came two weeks ago in the prestigious Lions Tournament when the Caimans took down five foes over a four-day period to capture the 4A Division Championship. During that span, CA unveiled its enviable and rather astounding pitching depth with four different hurlers tossing complete games, three of which were shutouts.

What follows is an anatomy of that terrific run.

Classical began its notable journey to the tourney crown with a 8-0 shutout of Fallbrook that featured a one-hitter by right-hander Zack Jordan as well as Noah Dull’s offensive output that included a pair of hits, a triple, a run scored and an RBI.

The following day it was the San Diego Cavers chance to derail the Caimans but they were destined to meet a similar fate as did the Warriors. Once again CA got a sparkling effort from its starter in the person of  left-hander Zach Isham, who did a splendid job of pitching to contact –yielding just one hit while going the route. And giving clear evidence that his stick can be every bit as menacing as his wing, Jordan raked with authority, delivering a triple, double and four RBIs in the Caimans’ 6-0 victory.

Next up it was Tim Boshaw’s turn to take to the hill versus Hilltop and not to be outdone when it came to stifling the opposition, the senior righty gladly joined the shutout parade with a nifty three-hit whitewash of his own. The hitting star of this 3-0 win was JP DeLuca, who ripped a double and drove in a brace of runs.

CA’s then made the most of its’ Lions experience with a pair of triumphs on April 18 that brought home the hardware. First, in a contest against Mt. Carmel, the Caimans snapped a deadlock in the sixth inning with a game-deciding three-run outburst. Determined Tyler Clark picked up the victory with a complete game outing (7 hits, 1earned run) while the impactful Jordan continued to swing some heavy lumber with a two-hit, 3RBI performance.

Later that afternoon, the title was wrapped up with a decisive 9-2 conquest of San Dieguito Academy. Senior Vince Marcantonio picked up the win with five solid innings of work (2 earned runs) before turning things over to the ubiquitous Jordan who closed things out by tossing a pair of scoreless/hitless frames. On the offensive side, Michael Moody and Dane Kelsey were big contributors combining for four hits, three runs scored and two RBIs. And oh yeah, there was that man again! That’s right, Jordan once more was busy grabbing the spotlight with a triple and three more runs driven in.

So it came as no surprise to anyone that Jordan’s heroics justifiably earned him designation as the 4A Lions MVP. But other Caimans such as Dull (7 hits, 6 runs scored, 5 stolen bases,) Kelsey (5 hits, 2 doubles) and DeLuca (5 hits, 3RBIs) made a significant impact as well.

And proving that they weren’t about to suffer a letdown in the aftermath of their Lions success, the Caimans continued to roll, dispatching Coastal rival Bishops by 10-4, 7-3 and 4-1 counts in three subsequent contests.

Who knows where, when or even if this lengthy CA streak will run its course because right now the Caimans are playing with considerable confidence, conviction and belief. At present, nothing seems beyond them. And a special season that has already featured a passel of memorable highlights could very well morph into something even more spectacular.

Writers Note: This story was submitted before the Caimans’ winning streak came to an end with a 6-4 loss to Santa Fe Christian. 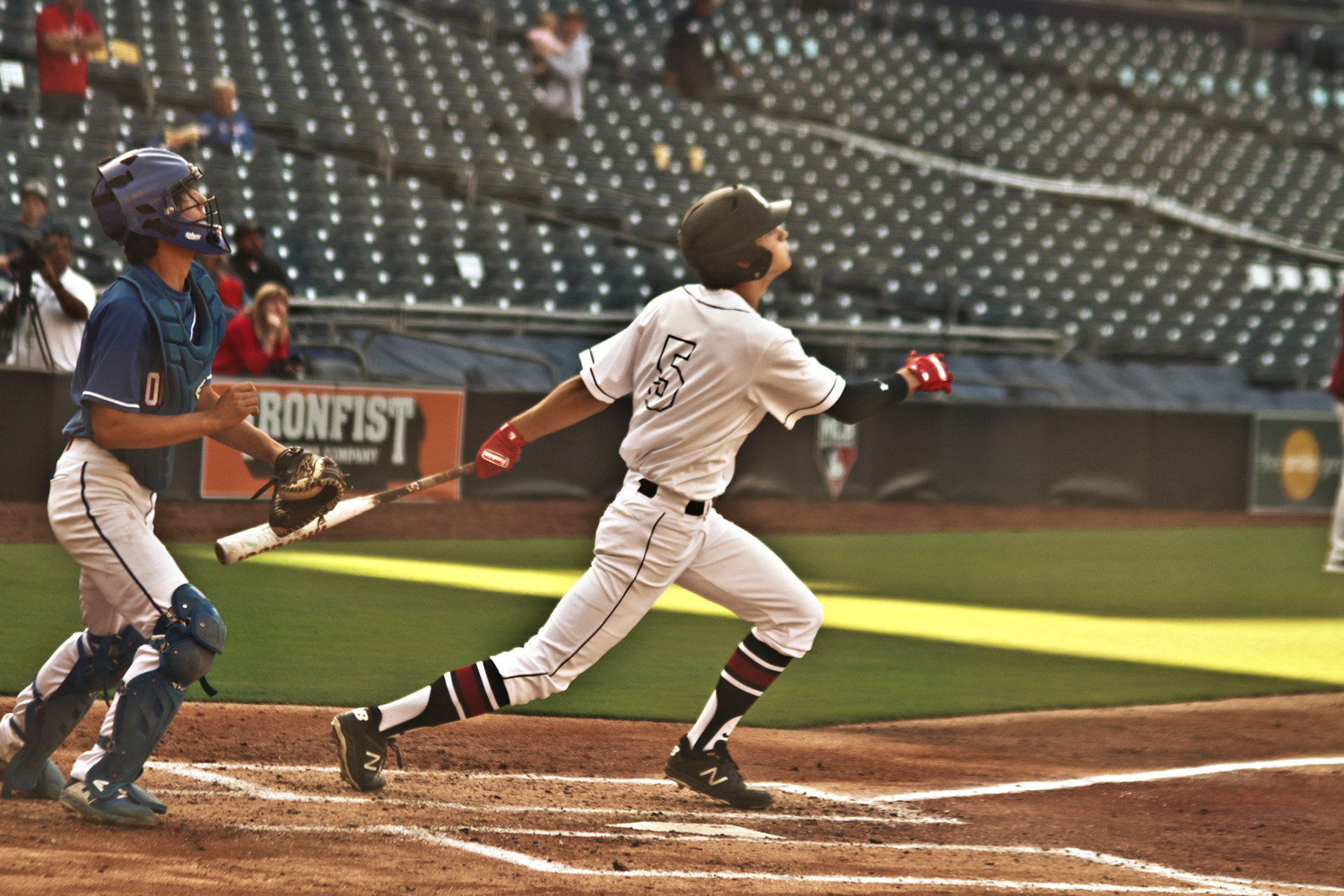 Talented outfielder Noah Dull is having a stellar senior season.