Caimans capture yet another volleyball crown 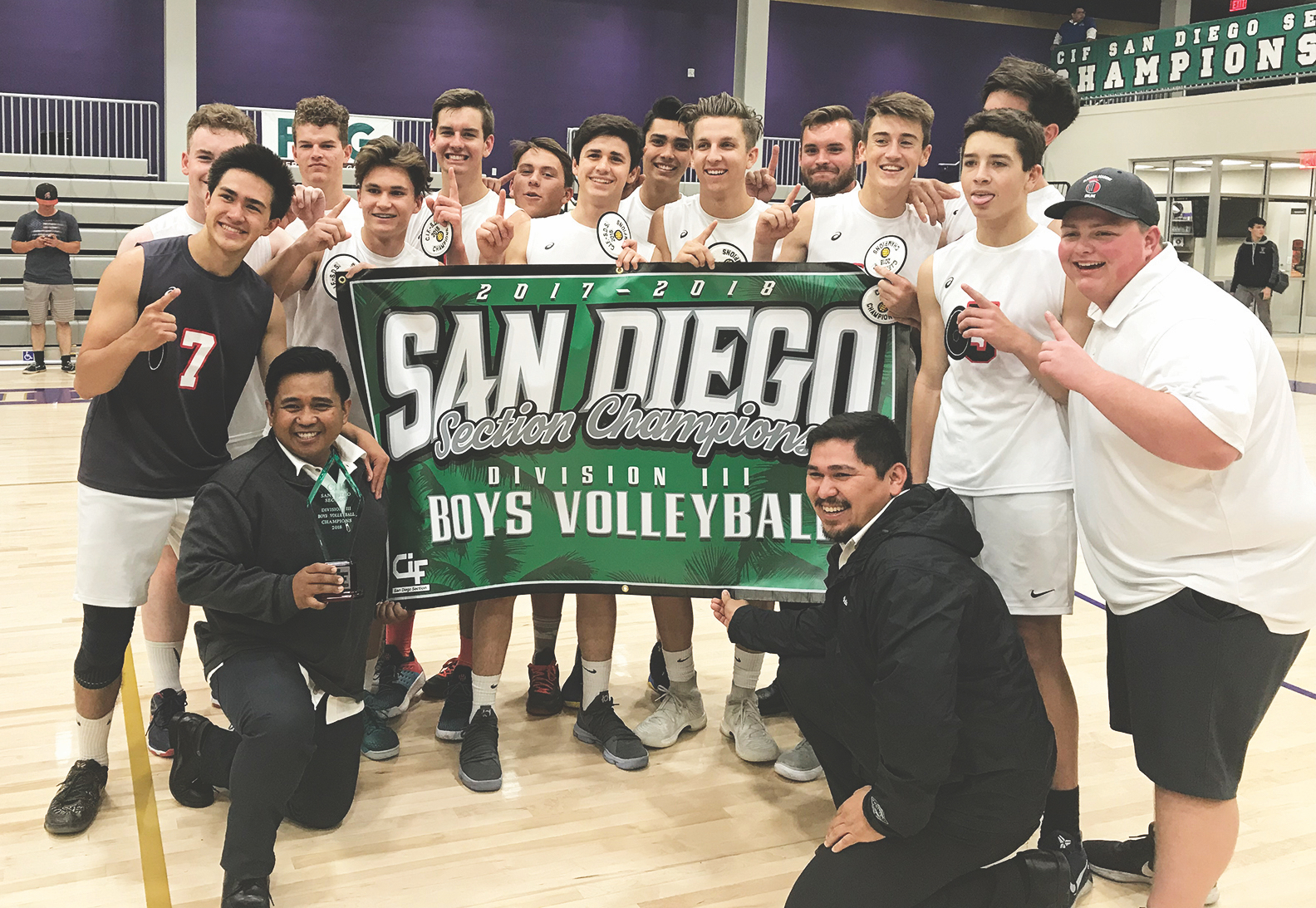 The Caimans are all smiles as they flash the No. 1 sign in the aftermath of their dramatic five-set victory over Fallbrook in the Division III championship match. Photo Courtesy of Classical Academy

Well, obviously moving up in class didn’t slow down the juggernaut that has become Classical Academy volleyball.
A year after the Caimans (26-7) captured the San Diego Section Division IV title, they one-upped themselves last Friday night when their taut 25-18, 25-19, 19-25, 21-25, 15-10 victory over Fallbrook (18-9) at St. Augustine High netted them another championship, this one of the Division III variety.
That’s some pretty heady stuff for a program that has been in existence just four years. Maybe Caiman coach Jo Milo isn’t exactly a miracle worker but he sure knows plenty about producing impressive results in a condensed period of time. Moreover, he seems to have the knack for getting his squad to play to its potential when it matters most.
Milo summarized his feelings about his squad’s ability to meet the challenge of the postseason when he said, “That’s what CIF is all about, giving it your best and not holding back.”
After being seeded No. 1 and thereby earning a first-round bye, the Caimans steamrolled their way to the final by taking out Sweetwater (No. 8) and then Clairemont (No. 4) while dropping nary a game.
As for the contest with the Warriors, the Caimans seemed primed to promptly end matters after taking the first two games. But Fallbrook, ignited by the 21 kills of Miles Dewhirst, dug deep, competed fiercely and rallied to even the match after four sets.
Entering the pivotal and deciding fifth game, the Caimans made a few adjustments, not the least of which was having Ethan Champlin move to outside hitter where he brought considerable energy. Milo also reminded his charges to play to their strengths and bring a total commitment to each and every remaining point of the match.
And with three early kills from the engaged Champlin setting the tone, Classical was never headed while finishing things off.
As to be expected in such a hotly contested match, the Caimans needed key contributions from multiple sources. Setter Evan Lipe, who was honored with a CIF Sportsman Award, was a factor throughout with his ability to keep Fallbrook guessing as to where he would be directing his next assist. Ever the battler, Lipe left everything out on the court despite having to deal with a balky back.
A pulled back was also a concern for Concordia-bound Christian Nowtash but the senior standout nonetheless gamely fought through it to author a number of resounding hits which resulted in 15 kills.
From start to finish, another powerful force for the Caimans was Michael Pierce, who pounded the ball with regularity as his team-leading 18 kills would attest.
The collaborative efforts of the Champlin boys, the aforementioned Ethan as well as brother Jacob, were also invaluable to the Classical cause. Pooling their talents to produce spectacular serving as well as breathtaking digs, these siblings seemed to be all over the court.
And finally, there was the importance of utility player Bradley Polancic, who created genuine matchup problems for the Warriors whether he was making his presence felt as a hitter, blocker or libero.
Now it’s onto the prestigious Division II State Regional where the Caimans will head up Interstate 5 for a 94-mile trip that will culminate at the Downey High gym. It is there that Classical (No. 6 seed) will confront a Warrior team (No. 3) that is expected to pose a major test based on its glossy 26-4-1 record.
Again Classical will be in a situation where it attempts to take yet another step higher but thus far, the Caimans have proven they relish the chance at demonstrating upward mobility.