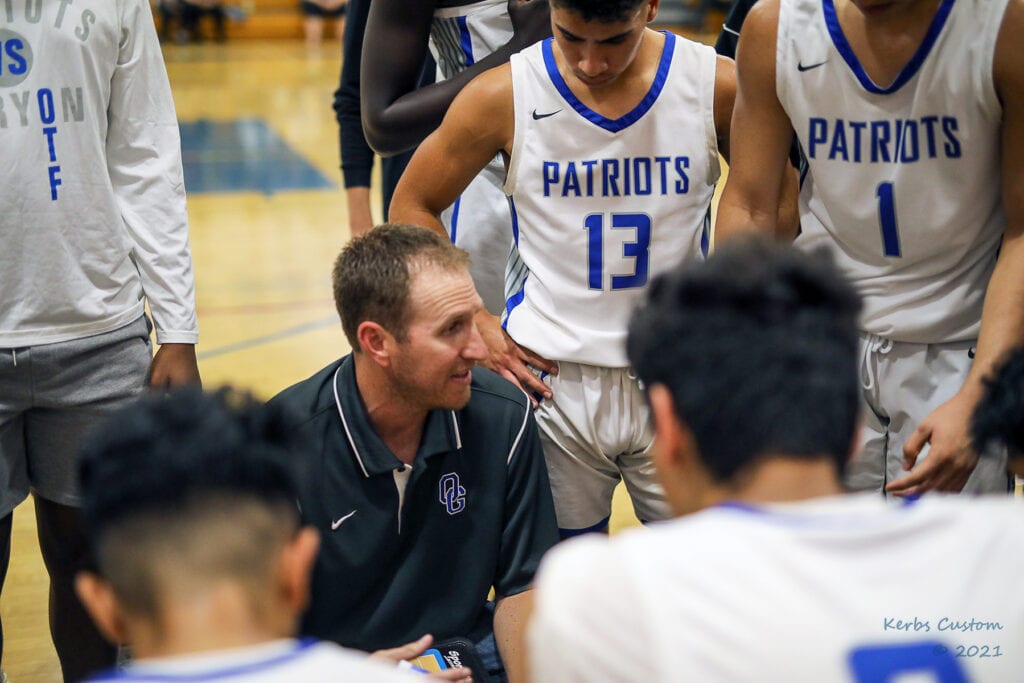 OG coach Chris Featherly once again has his Patriots winning games in the postseason.
Photos by Lenny Kerbs

To say the least, it was an eventual week on the Escondido prep landscape. So let’s get right into the specifics.

A good place to start would be with the efforts of the Classical Academy girls basketball team. Thirteen days after the Caimans’ girls soccer team won a CIF title, Classical’s hoopsters got aboard a championship train of their own.
Proving that they were even better than their No. 3 seeding, the Caimans (17-9) dispatched four opponents en route to a San Diego Section Division IV crown. The capper came in a 53-50 victory over Oceanside High in the finals.

In that contest, Classical secured a 36-25 halftime lead and then parlayed an 11-0 run late in the third quarter and into the fourth that provided enough of a margin to withstand a late 13-0 Pirate binge that narrowed the gap at the end.

Go-to junior Faith Brinkman was a scorer deluxe as she netted 24 points. Showing her versatility as well, the talented guard also chipped in with five rebounds and a like number of assists. Another major contributor was senior Brenna Hoff whose eight points and nine rebounds were highly instrumental. And the Clegg sisters, Aubry and Haley, factored heavily in the outcome as they combined for 15 points and 13 caroms.

On its march to the crown, Classical took care of business against Mtn. Empire 77-15 (Brinkman 23 pts., A. Clegg 11 rebounds), San Ysidro 35-23 and Monte Vista 43-41 (Faith Behrendt 11 pts., Brinkman 16 boards) before matters culminated with the conquest of the Pirates.

As a result of their winning ways, the Caimans earned a berth in the CIF Southern California Girls Basketball Championships where they will face 9-3 Avalon in a first-round Division 5-A matchup.

It’ll be most interesting to see if Classical’s special season can take on an even more shimmering glow.

Turning to a sport of another sort, it was once again Miller time. In another dazzling display at the San Diego Section Division 1 Track Championships held at Del Norte High last Saturday, San Pasqual’s Elise Miller continued her amazing affinity for quads. It just seems that every time you look, this one-of-a-kind youngster is delivering wins in bunches of four.

Armed with not only terrific athletic prowess but buoyed by a tremendous clutch gene that enables her to constantly rise to the occasion, Miller is a true showstopper. On Saturday, no one authored bigger headlines.

Her supreme moment came when—after waiting for the wind to die down and conditions were optimal—she sped down the runway and hopped, skipped and jumped her way into history. Miller’s mighty effort in the triple produced a landmark length of 42-3½ which topped the 34-year-old section standard by a notable seven inches. Miller has been knocking on the door in this event for quite some time and her dogged determination to be its record holder made what happened seem almost predestined.

But the Golden Eagle senior delivered other notable achievements. In the long jump, Miller leapt a substantial 19-4¼, the very best in the section this year. Then tack on wins in the 100-meter hurdles in which she established a personal record (14.15) as well as the high jump (5-4) and you have a day that will be long remembered.

Miller’s next chance to exhibit her superb talents will come this Saturday in the Section’s Open Championships at University City High. Having already captivated onlookers with her previous exploits, one can’t help but wonder what she might offer next. Could another remarkable four-pack possibly be in store?

Switching back to the local basketball front, the boys’ teams of Orange Glen (23-6) and Calvin Christian were stopped just shy of championship glory after being saddled with tough playoff losses.

In a San Diego Section Division II finals battle that pitted the top two seeds against one another, the Pats got off to a sluggish start against Coronado (21-5) in a game that was contested at St. Augustine High. OG was clearly out of rhythm early and played unevenly while falling behind by a 33-18 count at intermission. But coach Chris Featherly’s crew is nothing if not gritty. And having noticeably settled down in the second half, the Pats gamely whittled the lead down to one before a desperation shot by Islander Wayne McKinney with 14 seconds remaining closed the book on a 51-48 Coronado victory.

Quiet in the first half, guard Mickey Chew helped ignite a strong OG surge down to the wire with a 21-point night that included a perfect 7 of 7 from the free throw line. Hustling senior Adam Nieves did some heavy lifting with a nine-point, eight-rebound effort while Chris Martinez (nine points) and unsung Tyler Meyers (10 caroms) were also  pivotal in getting the Pats close. But shooting only a subpar 38% from the field was a crucial factor in sealing OG’s fate.

An interesting sidenote is that just to make it to the finals, the Pats had to down a pesky Del Norte squad in a taut semifinal affair that went to double overtime. After allowing a late eight-point lead to dissipate in regulation, OG needed to dig deep before it could finally outlasted the Nighthawks 74-64. In arguably his best game ever, senior guard Roell Lamug was a mighty force with 26 points while Chew (21 pts.) and Nieves (13 pts., 17 rebounds) played their usual standout roles.

Despite the loss to Coronado, the Pats’ season is still very much alive—having qualified for the Southern California Basketball Division 4-A Championships. It is there that OG, a No. 2 seed, will seek to make another strong playoff push, beginning with a first-round matchup against Oxnard’s Rio Mesa (12-9).

As for the Crusaders, their nemesis Maranatha Christian once again foiled them and ended their title hopes. During a season in which Calvin suffered three losses in 22 outings, the Eagles inflicted each of those setbacks.

In a low scoring Division IV championship tilt, the Crusaders never led, tallied just nine points by intermission and trailed the No.1 seed Eagles by 14 entering the final quarter. But Calvin showed its heart by finishing strong and narrowing the eventual margin to 34-28. Crusader post man Martin Gumwel, an undeniable presence at 6-foot-11, tried to keep his team in the hunt by delivering 10 points, 17 rebounds and three blocks but it wasn’t nearly enough. Forward Brandon Nelson was the only other scoring threat for CC as he also reached double figures with 10 while guard James Jansma did some nice work on the boards as his nine caroms would suggest.

Not to be overlooked is that Calvin’s advancement to finals was made possible by an impressive 62-32 victory in the semis over 3rd-seeded Holtville. In that contest the gifted sophomore Gumwel totally dominated with a spectacular performance in which he seemed to score at will (28 points) and absolutely took over on the glass (25 rebounds). Jansma did his share too by chiming in with 14 points of his own.

In its entirety, it was a marvelous season for the Crusaders and had it not been for the roadblock that was Maranatha Christian, it would have even been better. As in perfect. 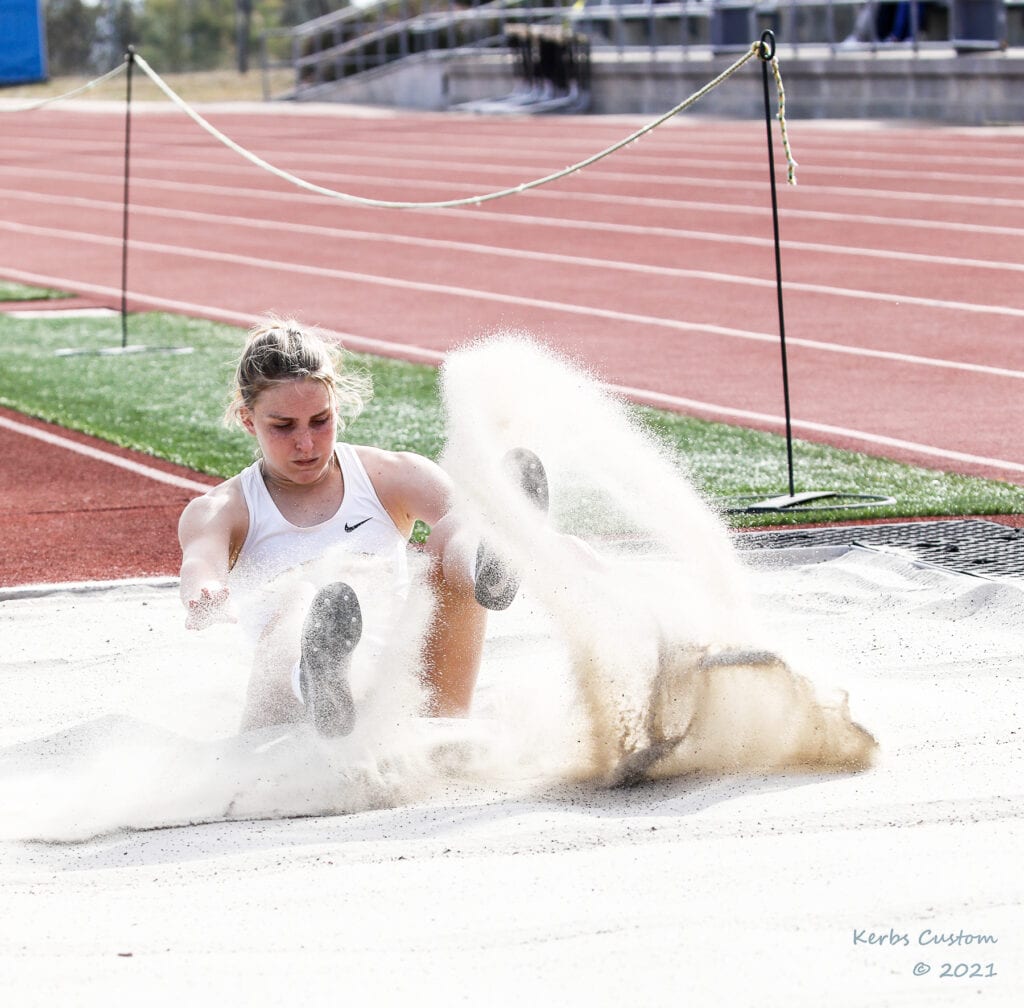