By fending off the Jags, Escondido takes command in the VL 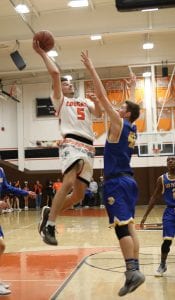 The basketball contest between Valley Center High and host Escondido on January 31 was unquestionably the marquee Valley League matchup to date.

To begin with, the game was laden with heavy implications. The unbeaten Cougars were attempting to strengthen their grip on first place in the VL and expand their lead to two games at the halfway point of the league schedule. If Esco could subdue the Jags, it would have a sizeable leg up in capturing the circuit championship.

For the Jags of Coach Jon Jones, the confrontation presented a grand opportunity. If VC could deliver a winning effort, it would move into a tie atop the standings and be in an enviable position for a run at the league title itself. The capable Jags were hoping that their memorable overtime victory over Ramona just five days before would provide them with a momentum that might carry over into their tilt with the Cougs.

So, with plenty at stake for both sides and given the undeniable skill-set of each squad— on paper this had the makings of an exciting and highly competitive affair. And for the most part, this anticipated contest lived up to that expectation.

Ultimately, it was the Cougars who prevailed by a count of 75-60; though don’t be misled by the spread of the final score. This game had more than its share of intensity and drama. After coming out smoking and at one time owning a 16-point lead well into the second quarter, Esco was forced to fight off a superb VC comeback that saw the Jags twice close to within two points with ample time left in the third period.

But then clutch senior Ryan Green, who never seems to shrink from the big moments, hoisted his team on his back and literally took over. First the gifted forward tallied on runner from six-feet which was followed-up by a floater off the glass. Next came a penetration through the lane that resulted in a foul which Green converted into a free throw.

Green continued to produce when he drove hard to the hoop and finished things off with a nifty layup. The beat went on when, after expertly drawing another foul, he confidently drained two more charity tosses. And then as if to add an exclamation point to his onslaught, he maneuvered in deep before handing off a sweet assist to teammate Andy Martinez, who scored on a close-in shot at the buzzer.

And all this doesn’t include the impact that Green had earlier in the period when he parlayed a steal into a fastbreak bucket and later set up Haikeem Barber with a terrific feed.

Green’s third-quarter domination saw him score 11 of his team-high 19 points and stake the Cougs to a 58-48 edge heading into the final stanza. The visiting Jags would get no closer than seven points from that point on.

And if it was Green that did the heavy lifting as far as helping to put the Jags away, it was the athletic Barber (18 pts.) who ensured that the Cougs got out to a scorching start during a 24-point first quarter. Instead of using his propensity for getting to the rim with his silky-smooth drives, Barber went on a 3-point bombing mission that would have made deadeye Steph Curry proud. Four times the senior forward unloaded rainbow shots from various far-off locations that hit nothing but net. It was a remarkable exhibition of long-range accuracy that had the home crowd in a tizzy and showcased Barber’s versatility in being able to torment a defense, be it from the outside or in tight.

But the prime reason that the Cougars (12-10, 4-0) are now surging and have won four in a row is because contributions are coming from multiple sources. Though there is no disputing that Green and Barber have been the ringleaders of Esco’s recent run, others have been key factors as well. The hustling and often indefatigable Chris Landry made his mark versus the Jags with 11 points and hardnosed work on both the boards and at the defensive end.

Point guard Jacob Hutchinson continues to do a nice job with his penetration, dishing and hawking defense. “Hutch” can also hit the jumper or take it to the rack and his nine points against VC were not to be overlooked. Off the bench, junior Justin Fox has really been coming on, bringing an energy and effort that is paying huge dividends. Fox’s impact on the game with VC went far beyond his point total (9)–which was of real consequence.

For VC coach Jones, though he found some solace in the way his Jags battled back and made things very interesting, he couldn’t help but feel this was a missed opportunity. “There were stretches where we just stopped concentrating and had lapses on both defense and offense,” he bemoaned.

Though its record is solid (12-8, 2-2), Jones feels VC should have shown better at this stage and is capable of much more. “For the most part, we just haven’t been able to stay focused for four quarters,” he says. “This team has been consistently inconsistent; it’s been too much of a rollercoaster ride and that’s really on me. We need to tighten things up.” 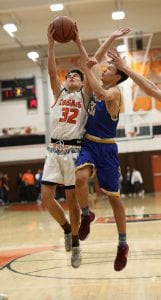 Junior forward Justin Fox (32) was once again a big-time contributor off the bench with nine points.

But as much as Jones wished his team had been steadier and more locked in, he wasn’t hesitant in praising the Cougar squad that vanquished his Jags. “They are definitely the most athletic team in the Valley League,” he began. “They just outworked us and their whole team really knows how to compete.”

Jones also had words of praise for Esco standouts Green and Barber, who spelled the difference in this key encounter. “They’re two guys that are smart, play hard and have the ability to pick their spots.”

In defeat, the Jags weren’t without their own noteworthy players. Power forward Kobe Dominguez was his usual stellar and physical self, pacing VC with a game-high 24 points.

Dominguez was the main catalyst behind the Jags’ spirited third-quarter rally. After scoring and then drawing a foul on an alert inbound feed from Keith Vasquez, Kobe finished off a conventional 3-point play with a free throw. Soon after, he added two more points from the charity stripe after a superb fake from down in low created contact.

Subsequently, he again went strong to the hoop, muscled in a basket with his right hand and completed yet another traditional trifecta when he swished home a shot from the line. And before he was done, he had knocked down a mid-range jumper before tacking on one final free throw. In a laudable individual effort, Dominguez’s third-quarter output had matched that of the sensational Green.

Like Kobe, guard Kamin Davis (14 pts.), who when hot can stroke it with the best of them, was a big reason why the Jags got back into the hunt when he nailed a pair of deep treys during the first few minutes of action after intermission.

The other Jaguar who registered in double figures was post man Loren Diloreto (11 points) who was active and engaged. If Diloreto can continue replicating the performance he put forth against the Cougs, VC will have another serviceable weapon to add to its arsenal. “Loren’s been coming around,” says Jones. “Tonight, he was strong around the basket and got himself into some good spots from which he could score.”

Now tied with San Pasqual and Ramona in a logjam for second place in the VL, the Jags will  have to run the table from here on out in order to have any chance of  claiming a league title. But for that to happen they’ll need Esco to falter and based on the way the Cougars are peaking at just the right time, that likelihood seems remote. Jones expressed the reality: “We’ll try to do our part by winning but really, things are now out of our hands.”

Not so for Esco. Firmly in control of their fate, and playing at a high level, the Cougs of coach Paul Baldwin might very well emerge from the VL schedule unbeaten as they angle for a solid Division 2 seeding entering the postseason.

And as long as Esco has the clutch Green to serve as a go-to guy, the gifted Barber doing his thing, the relentless Landry scoring and Windexing the boards, “Hutch” displaying his all-around game and some pivotal role players stepping up and contributing, there’s no reason the Cougars shouldn’t remain on the prowl, both at present and into the future.