Bumpy start but Golden Eagles have taken off since 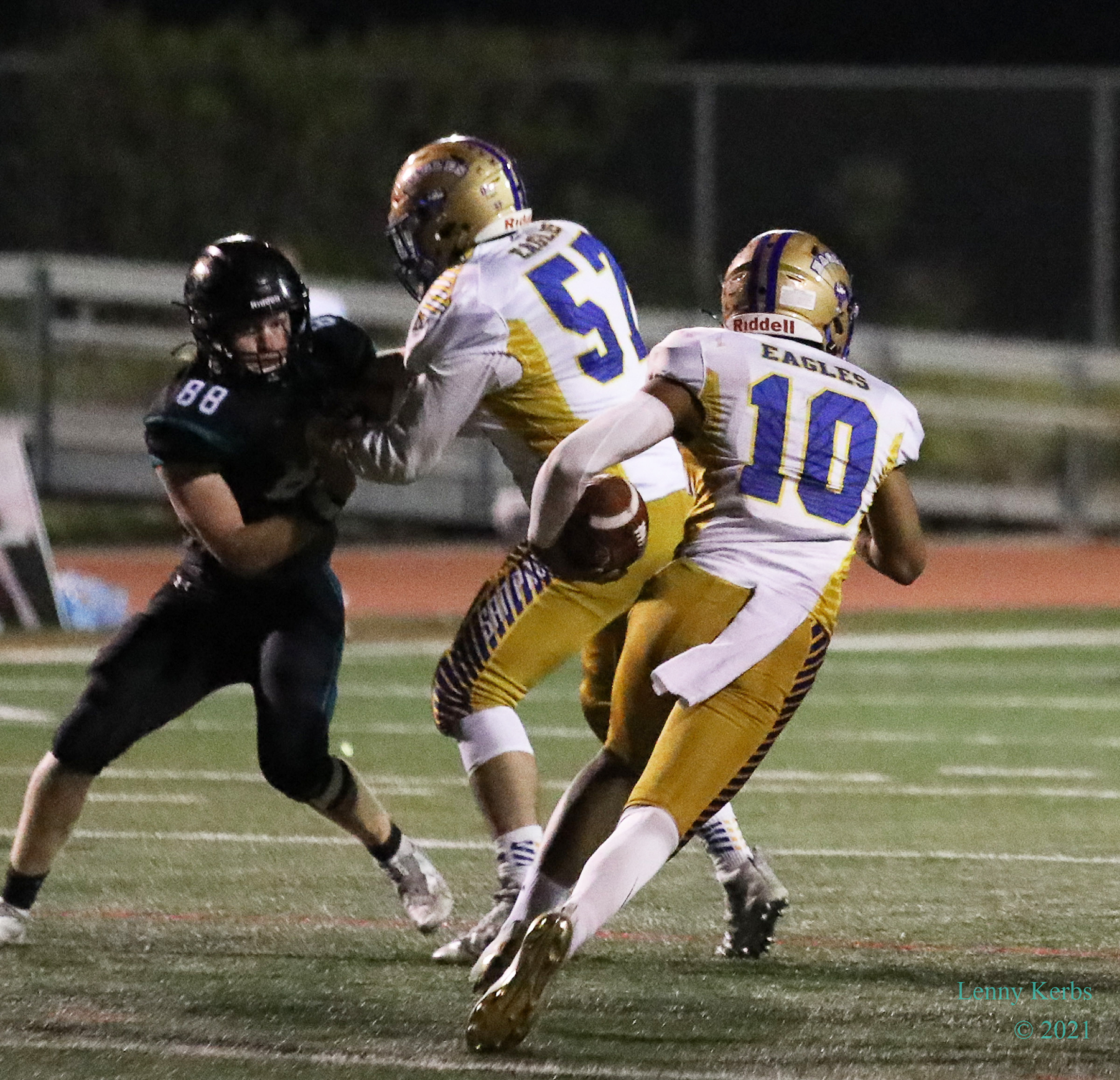 No, it certainly wasn’t the way that San Pasqual High wanted to kick off this abbreviated and unprecedented prep football season.

Pitted against the dangerous and potent Ramona Bulldogs in their opener, the Golden Eagles were left grounded and perhaps a bit stunned in the wake of a convincing 40-0 road defeat at the hands of their Valley League rivals.

Not only was the winning margin rather eye-opening but one couldn’t help but wonder how would SP respond in the aftermath of such a lopsided loss.

But know this about a Tony Corley coached team. It will sooner rather than later show grit, demonstrate physicality and compete its butt off. Taking their cue from Corley, his Golden Eagles don’t know the meaning of quit and eventually finding their stride has become an expected part of their inherent DNA. Thus, it was no big surprise that SP flushed its missteps versus Ramona and has rallied with three straight victories, each of them impressive in its own singular way.

The latest of these wins occurred at home last Friday night against an ever-improving Fallbrook squad. Pushed to the wall by the scrappy visitors, the G. Eagles demonstrated their clutch gene late in the fourth quarter when quarterback Danny Davis hooked up with slot man James DeBora on a 32-yard touchdown connection that knotted the score at 13 apiece. It was then left for Saul Guerrero to take center stage and provide the eventual difference when he booted home a successful PAT.

However, the Warriors gallantly kept plugging away and SP’s victory wasn’t assured until the ubiquitous Davis pilfered a Warrior pass at his own 1-yard line with scant time remaining that finally sealed the deal.

Two other telling plays must be mentioned in regards to this nail-biter of a triumph. The first was a dramatic hitch-and-pitch right before halftime that began with a Davis toss to Joey Chappelle who executed a well-timed flip to Noah Snyder which led a spectacular 81-yard score. The second was defensive lineman Andrew Batalla’s impactful block of a Fallbrook PAT attempt that proved instrumental as regards to the final outcome.

With just one more game left on their schedule, the G. Eagles (3-1) still remain in the hunt for a share of a Valley League title. But getting there won’t be an easy task. First and foremost, SP must vanquish a very competitive Escondido squad that nearly knocked off unbeaten Ramona (4-0) before losing a heartbreaker 35-32. The other domino that needs to fall would be for Valley Center, having yet another successful season, to rise up and spring an upset over the Bulldogs in the season finale for both those clubs.

After their disappointing setback to the Bulldogs, the G. Eagles began picking themselves up with a 21-6 conquest of Rancho Buena Vista in a game that featured a three-touchdown SP outburst in the fourth and final quarter.

But it wouldn’t be hard to argue that the season’s defining contest came the following week when Corley’s crew trekked up the grade to Valley Center and took on a Jaguar squad that looked rock solid in wins over Fallbrook and Escondido. The Jags are always a stout opponent but it was revealing that VC head coach Rob Gilster expressed real concern about squaring off with the G. Eagles. Gilster seemed to have a sixth sense that his team was going to be challenged to the max. In the end, the Jaguar coach proved to be quite the prognosticator.

In a notably physical contest, SP never trailed and parlayed the talents of Davis and a crucial pick six by Tyeric Milner into a hard-fought 28-20 victory. When asked what keyed this pivotal win, Corley came right to the point: “We simply made the big plays when we had to,” he said.

Once SP scored a go-ahead touchdown late in the second period to seize a 20-14 advantage, the visitors were never overtaken en route to an eventual 8-point triumph that was highlighted by a host of standout performances.

The versatile Davis, who’s capable of assuming a number of different roles, shined in this affair. Not only did the elusive junior rush for 82 yards but he was nearly perfect through the air, connecting on 9 of 10 attempts that translated into 158 yards and a pair of scores. “Danny really played well and had a great game,” praised Corley. “He did a nice job of spreading things around.”

In addition to Davis, first-year running back Ricky Rodriquez was also a huge factor on the ground with his hard-charging style, needing just 13 carries to gain 98 yards and author a nifty TD tote.

Meanwhile, in his first game back from injury, the multi-dimensional DeBora simply tore it up. As a receiver, the gifted senior latched onto three receptions that went for 71 yards and a vital score. And just to prove that his notable skills are extensive, DeBora was also a beast on the defensive end, delivering hard hits from his safety position to the tune of 11 tackles.

For good measure DeBora added a timely interception to his productive night’s work.

But there were other defenders who loomed as major contributors as well. Active sophomore linebacker Peter DeCelles was an absolute revelation while registering a whopping 12 stops. And down in the trenches, senior Chris Faraguna was a constant factor given the way he helped control the line of scrimmage and made matters problematic for VC’s vaunted rushing attack.

And let’s not forget Milner, an all-around defensive back whose interception and 48-yard dash to paydirt was clearly a game-changer.

In a season that Corley wasn’t sure was going to happen and with his team having to make all sorts of adjustments to work around the specter of the coronavirus, the venerable coach is nonetheless enjoying the ride. “It’s been kind of weird but amazing at the same time,” he said. “The players have been super excited just to be out there and it’s been so fun to see the way the kids have stepped up and grown over these last few weeks.”

Indeed, with matters trending in such a positive direction, Corley can even suggest that the Ramona mishap may have been a blessing in disguise. “I think that game woke us up,” he said.

Well, the Golden Eagles are clearly wide awake right now and if they can stay in flight for their final contest versus the Cougars, a memorable script will have been written. Though their takeoff was mighty bumpy, their finish could be one that will be long remembered, treasured and relished. And should that be the case, what happened against the Bulldogs will be nothing more than a forgotten footnote compared to all the upside that was accomplished in its aftermath. 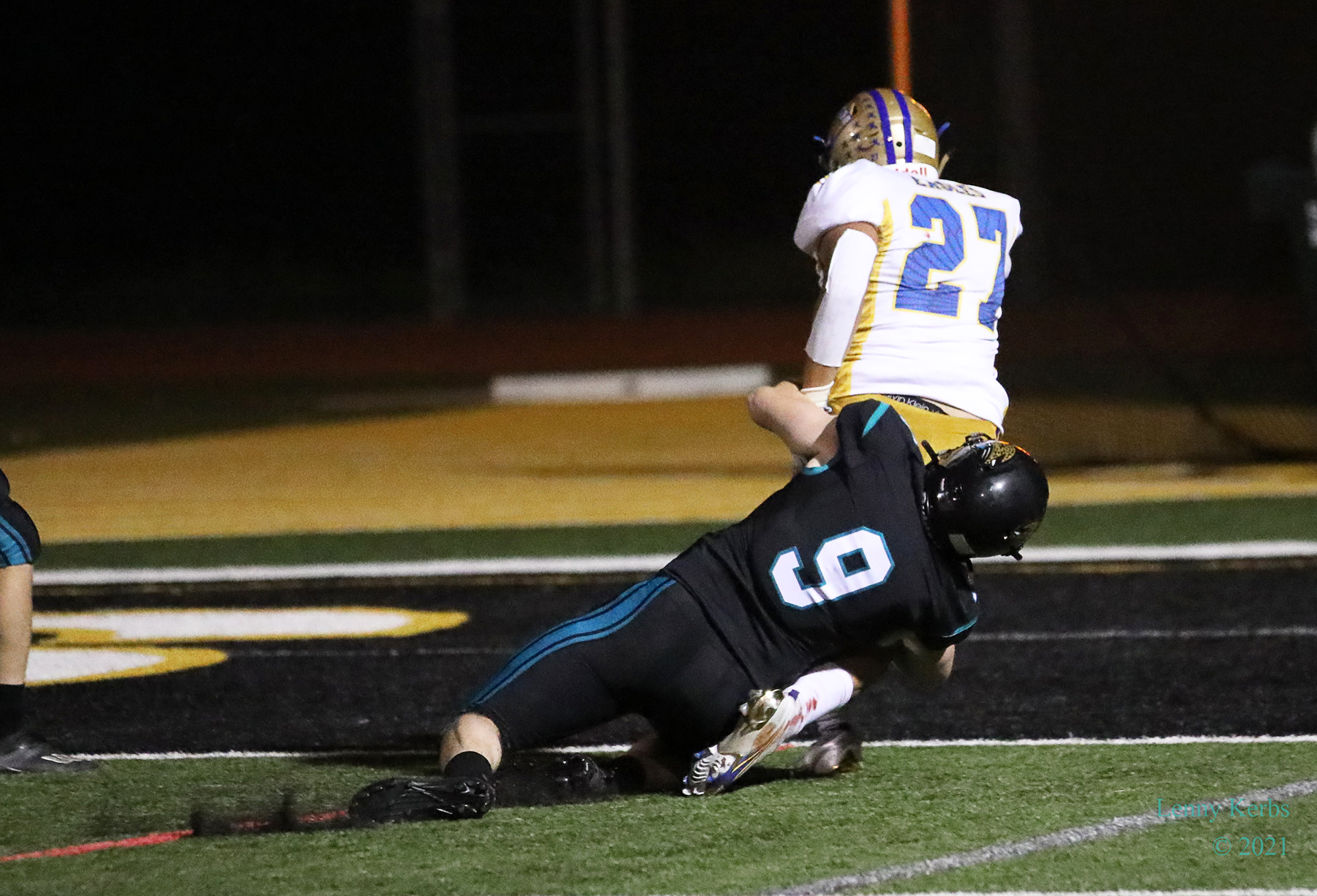 Golden Eagle running back Ricky Rodriguez powers his way into the end zone despite the desperate effort of VC linebacker Malakai Tacbian. Photo by Lenny Kerbs