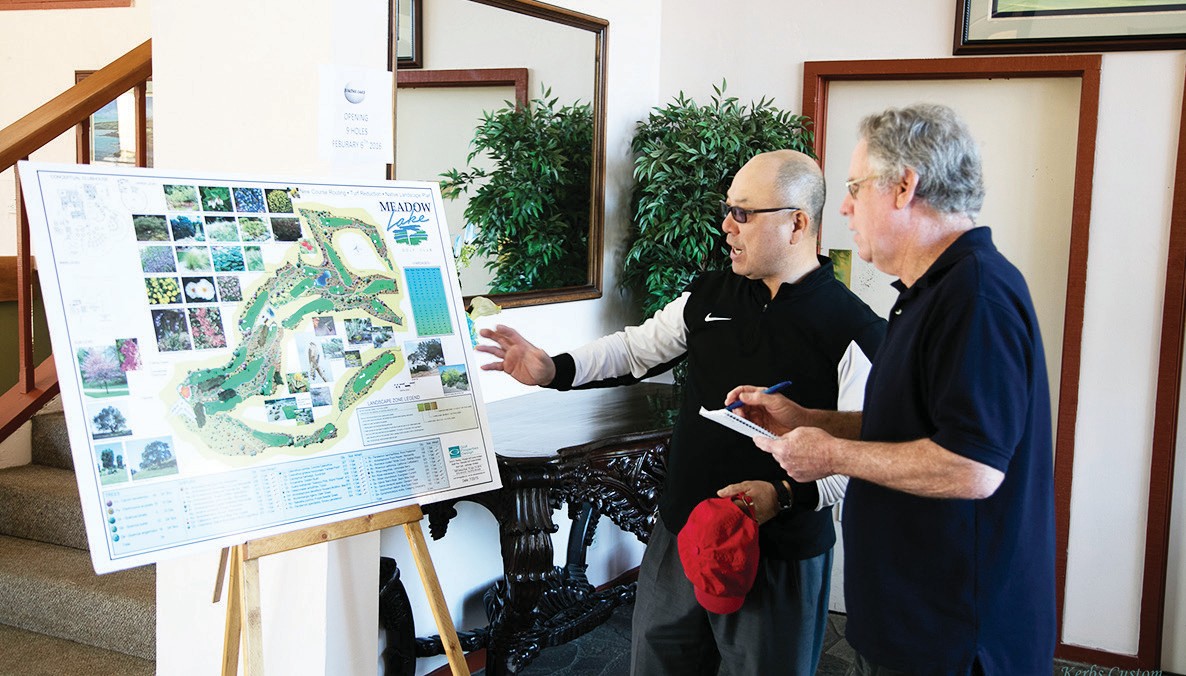 Like a beautiful butterfly morph­ing from a caterpillar, the Boulder Oaks Golf Club is emerging from a previous form. The end result could make this new course in Hidden Meadows one of the most picturesque, challenging and unique tracks in all of San Diego County.

In its past iteration, Boulder Oaks used to be known as Meadow Lake Coun­try Club, formerly a par 72, 6,557-yard course. In its redesigned and dramatically altered configuration, the soon-to-be- launched links will measure a tight 5,726 yards (from the black tees) while playing to a par 70.

Since last July, a significant makeover has been taking place, under the direc­tion of architect David Fleming of Golf Properties Design. “This is a totally new setup that should make for very interest­ing play,” says Boulder Oaks general manager Rex Choe. “It will have different views and landscapes, better conditions and strategy will play a huge part in get­ting around this course.”

According to Choe, the changes un­dertaken have been massive. Gone are holes 10, 11, 12 as well as part of 13 from the old Meadow Lake CC layout. Fifty percent of the turf has been re­placed. The transfiguration is so pro­nounced that Choe relates that only a remnant of the old course remains. This has been an extensive remake, not merely a facelift.

One of the truly interesting features of the remodel is that there will be ei­ther four or five (black, blue, white, gold and red) separate tee areas for each

Boulder Oaks seems to blend in seamlessly with the surrounding landscape.

hole, representing different dis­tances from which to hit. This will be extremely helpful to players of vari­ous skill levels. As a result, depend­ing on a golfer’s competency and confidence, the player can chose to make any given hole easier or more challenging based upon where he/she elects to tee off. This is a particularly nice option for seniors, some ladies, youngsters or newcomers to the game, allowing them to hit from a range in which they feel comfortable and not overwhelmed.

Make no mistake, accuracy and keeping it in the fairway will be a valuable asset at Boulder Oaks. This will be a target-style course similar to those found in Palm Desert and Ari­zona. Should you stray too far in ei­ther direction, you could find yourself in waste areas, not all that easy to ne­gotiate. Boulder Oaks will have very little rough since the natural surround­ing landscape provides the requisite difficulty if your shot is misdirected.

When the full 18-hole course, scheduled to ready sometime in mid- March, is up and running, it will fea­ture four par-5’s, eight par-4’s and six par-3’s. The greens will be undulating and carry moderate speed. Though the course, which gently and unobtru­sively winds itself through a Hidden Meadows neighborhood, isn’t partic­ularly lengthy, there isn’t a club you shouldn’t be able to use. But again, on this track, you might be advised to go somewhat conservative and throttle back on some tees, where keeping it straight will be at a premium. 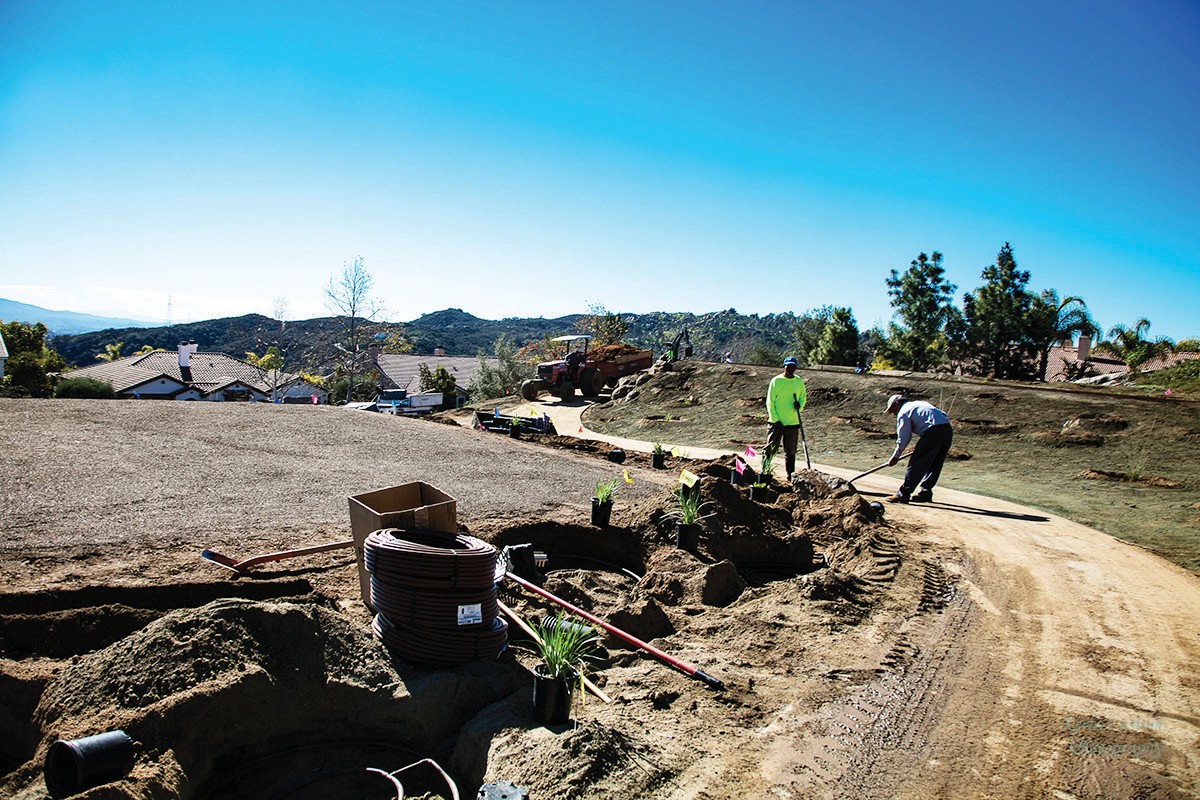 An example of the ongoing renovation taking place at Boulder Oaks.

you traverse the course in its entirety, there’s no mistaking how it earned its name. Majestic, large and often strategically-placed boulders dot the scenery. They stand like in­timidating sentinels, seemingly poised to watch over the proceedings taking place before them. Their presence is not only seen, it’s felt.

Though every hole at Boulder Oaks is in its own way visually impressive and testing, there are a few that truly stand out.

The par-5 fifth requires a drive to be carried over a conspicuous boulder. From there, the fairway narrows like a slimmed down waistline. Shots into the green demand accuracy as trouble looms both left and right.

The par-3 sixth might be the course’s signature hole. With four bunkers sur­rounding the green, one of which has a massive boulder sitting right in the middle of it (which should make for some rather creative shot making), the optic that this hole creates is terrific.

The eighth, a par 4, is quite unique since it offers blind shots both off the tee and from the fairway.

Perhaps the most breathtaking and all-encompassing vista can be found on the par-4 12th.

Thirteen is another memorable par-3 highlighted by a dramatic drop from an elevated tee to a rather modest downhill green.

And the course ends with a demand­ing par-5 18th that tempts the player to go for it in two but offers a potential penal result should you drift off-line. It is the quintessential risk-reward hole.

Because the revamping process is still ongoing, when the 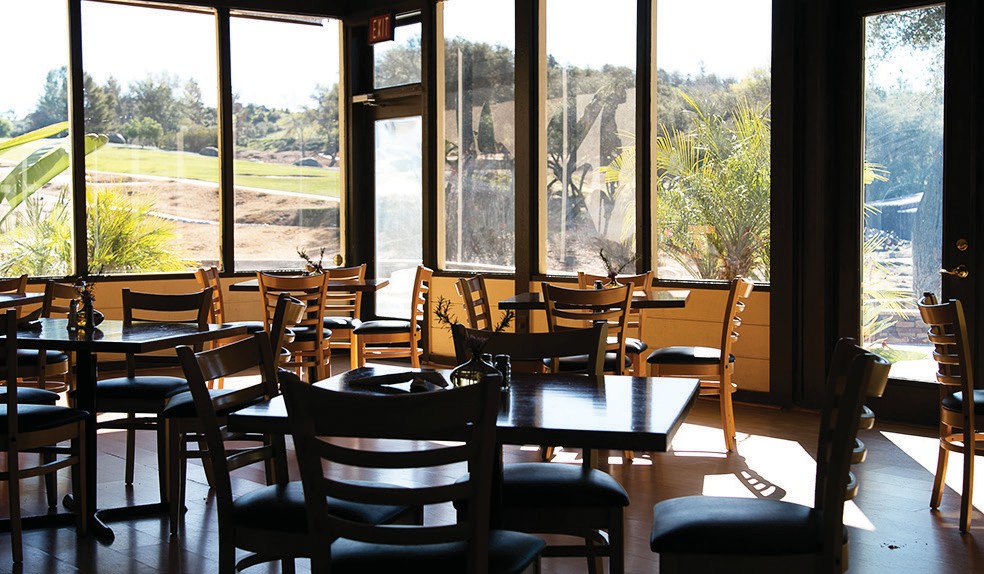 A more spacious restaurant now provides an expansive view of the course.

course has its official opening, currently scheduled for Friday, February 19th, it will do so in a scaled-down 9-hole format. That temporary course will include an as­sorted mix from both the front and back sides. Green fees will be $25 for nine holes of play. The cost for a full 18 holes once the course is fully operational has yet to be determined, but Choe assures that the rate will be “competitive.”

Memberships will also be avail­able, starting at $150 and ranging up to $350, depending on a variety of factors that the Club will be glad to explain.

A nice and sizable practice chip­ping and putting green will greet golf­ers as they make their way onto the grounds. Discussions are currently un­derway to determine if a driving range will eventually become part of the en­terprise.

Choe is truly excited and energized about Boulder Oak’s future. He feels the course is unlike anything else that can be found in the San Diego County area. The G.M is quick to emphasis its difference and distinction from the norm. Choe also envisions Boulder Oaks as being a great venue for cor­porate outings and for junior tourna­ments, given its accommodating dis­tance. He also believes its convenient location will lead to a steady flow of patrons. Boulder Oaks can be easily accessed by taking Interstate 15 to the Mountain Meadow exit. From there, simply head east up the hill to East Meadow Glen Way and turn left. To borrow an 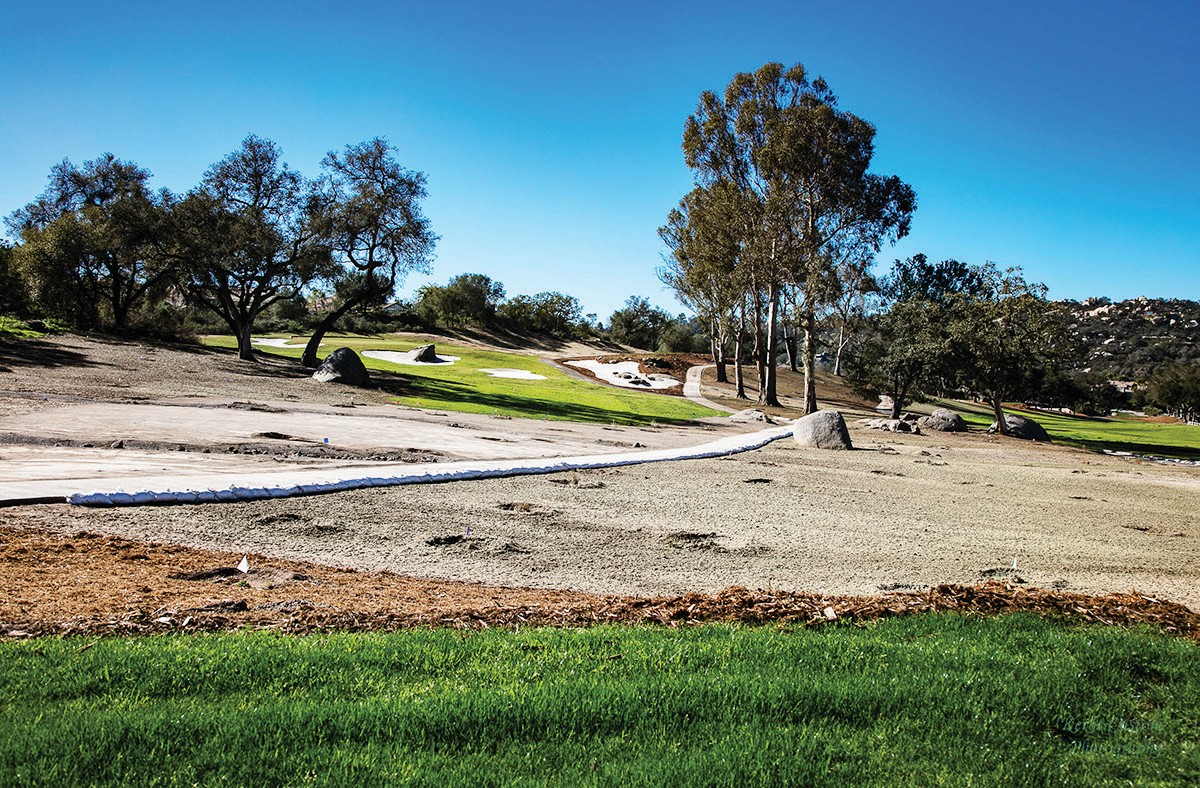 The signature par-3 sixth hole with boulders abounding, including one right in the middle of a fronting bunker.

old phrase, you can’t miss it.

Though it’s been the centerpiece of a $6.2 million renovation, the course isn’t the only thing that has been upgraded and modified. Its hardwood-floor restaurant (that can seat up to 180 customers) had a dividing wall removed to give it a spa­cious ambiance. In addition, more picture windows were inserted to provide an ex­pansive view of the course. The cozy, ad­jacent bar has also undergone some cos­metic changes. And finally, the pro shop has seen some definite improvements to its general appearance both inside and out.

The job of being the head pro at Boul­der Oaks has been assigned to Jennifer Parker, who will also see duty as Opera­tions Manager. Meanwhile, the versatile Choe, aside from his G.M. role, will busy himself giving golf lessons. A PGA mem­ber since 2013 and recently the head pro at neighboring Castle Creek for a year, the upbeat Choe looks forward to staying involved with the game by helping others improve and enhance their skills with the clubs.

Having seen the extensive remaking of Boulder Oaks first-hand, this reporter came away duly impressed. It’s got the potential to become a real golfing jewel, a signature golf course once it reaches true fruition in approximately 12 months. By that time, it should be beautiful in ap­pearance, growing in reputation and a real blast to play.

It’ll be a butterfly that clearly has tran­scended the caterpillar.

For those wishing more information about Boulder Oaks, please call 760-749- 1620 or visit their Web site at www.boul­deroaksgolfclub.com.