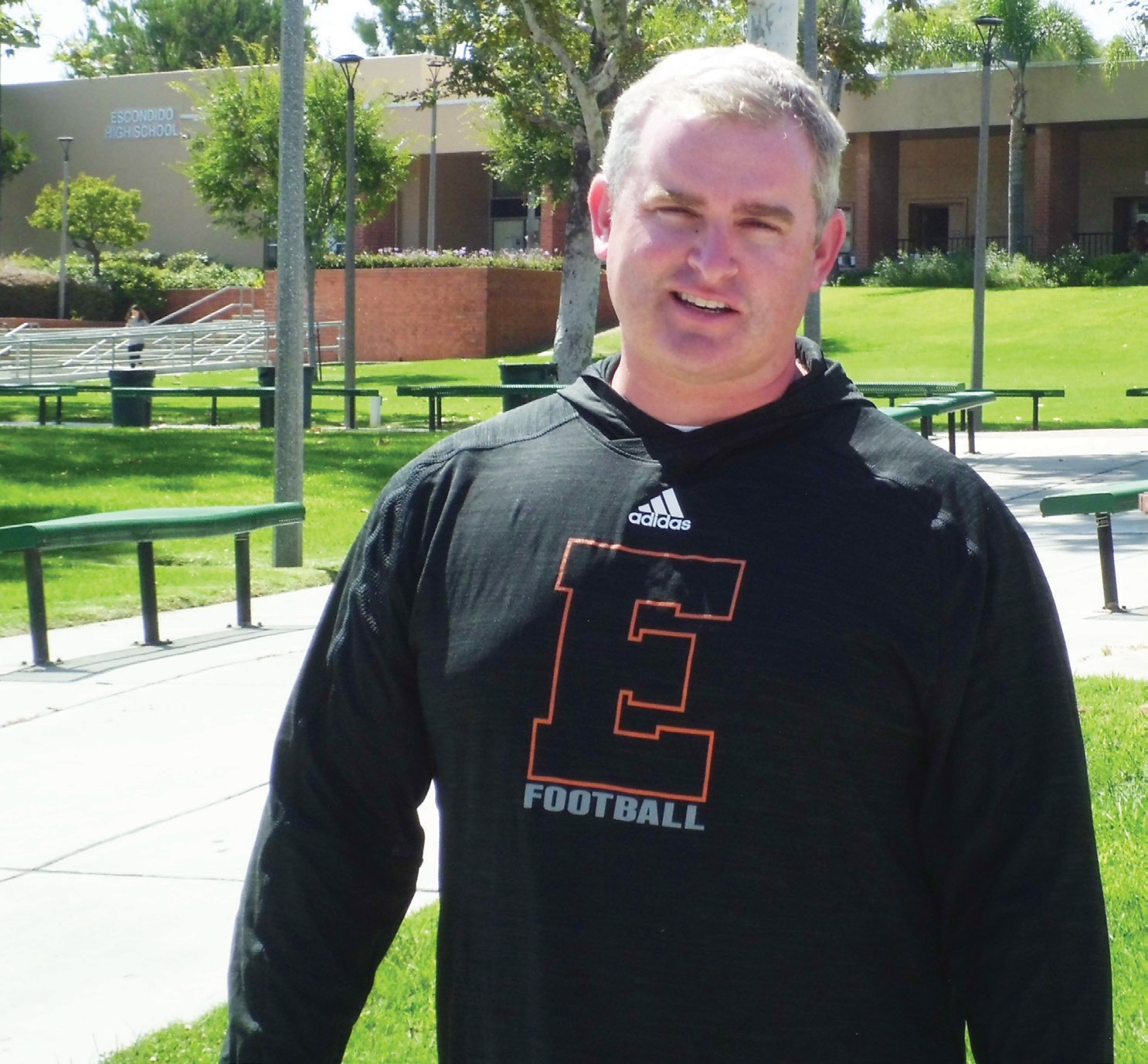 If you spend anytime around first- year Escondido High School head football coach Jud Bordman, it’s hard not to get a bit revved up, even when you don’t play for him. Damn, I almost asked him where I could grab a helmet and what time practice began? I jest, but only slightly.

You see Bordman has a presence about him. Not only is he knowledge­able about the game, but he brings with him an energy and intensity that’s con­tagious. And it’s for those reasons and plenty of others that he seems just the right man to lift the Cougars out a three- year valley (5-26) and get them headed back in the right direction.

Bordman is attempting to quickly es­tablish an identity for his team and to create a mindset where ‘in every prac­tice and with every rep, we are going all out.” It is also Bordman’s mission to create an environment of energy and passion to the point where his players will feed off of that culture. “We’re really going to try to build something here,” the coach says. “We’re going to love these kids up but we won’t expect anything less than their best. We’re go­ing to push hard to ensure the fact that they make the sacrifices necessary to be successful.”

As of late, things have been rather downbeat in Cougarland. Last year’s 1-10 campaign was a real bummer and in the two seasons prior to that, 2 and 8 records were the order of the day. Need­less to say, those results were pain­ful and disappointing. Bordman says that during this dry period, the athlete turnout for football wasn’t what had been hoped. Compounding matters, the Cougs fell into a rut and might have for­gotten how to win. Unfortunately, los­ing can create a momentum of its own and become habitual.

But you sense a turnaround could very well be in the offing, based on Bor­dman’s enthusiasm and the praise that he heaps on the squad currently under his command. “They’re a great bunch of kids,” he begins, “and they’re a lot of fun to be around. They also have true respect for the coaches and the game. I like this group.”

As the Cougars enter the 2016 sea­son, look for them to be balanced and ball-control oriented on offense while it’s expected the defense will be de­pendable and solid. If those things play out, Esco could be well on its way to a revival.

The Cougs will operate out of a pow­er I formation and the triggerman for the “O” will be senior Kellen McCoy, a superb athlete and a highly respected leader. Because he possesses nifty feet, look for him to move the pocket and of­ten throw on the run. Imbued with both accuracy and good arm strength and capable of running when called upon, McCoy won’t be easy to contain. Hav­ing benefited from splitting time at QB in 2015, this born competitor projects out to having a most productive year.

McCoy’s top target should be return­ing starter Miguel Rocha. Unquestion­ably the bell cow of the receiving corps, the senior Rocha has sure hands and is a notable route-runner. Extremely dedi­cated, Rocha is constantly at work re­fining his craft.

Complementing Rocha on the outside will be senior Bryan Jackson. The 5-9 Jackson is armed with a year’s starting experience and he’s been displaying ad­mirable effort in practice. Bryan knows the art of securing the ball and he’s very efficient while running his patterns.

Since running the ball will be a sta­ple of the Cougar attack, a lion’s share of that responsibility will fall on the shoulders of 5-8, 165-pound senior Marcio Souffront. Injured last season, Souffront has worked his tail off to get healthy and solidify his physique. Blessed with a real burst and strength, Marcio can neatly change directions and his conspicuous desire truly sets him apart. Moreover, if you need that clutch first down or a short yardage pickup, Souffront can deliver.

The cornerstones upfront for a prom­ising offensive line are center Alex Gonzalez (200 lbs) and Zeke Rodriguez (230 lbs.) With Alex operating at cen­ter and Zeke positioned at right guard, these two mesh exceedingly well to­gether and seem to feed off each other. Gonzalez is a focused performer who rarely makes a mental error and knows the blocking scheme to a tee. Mean­while, Rodriguez is a strong, aggres­sive youngster who plays well beyond his years.

On the defensive side, the Cougars want to be versatile and varied. As such, it figures they’ll mix it up with either a 4-3 or 3-3-5 deployment al­though Bordman likes to keep things relatively simple. Lining up correctly is also another of the coach’s most critical requirements. But of paramount impor­tance to Bordman is that his defenders be assertive and play fast. Look for the Cougs to show pace and verve when defending.

The “D” line is anchored by Josh Middleton, who could see action at both the nose and tackle positions. Though somewhat undersized (5-10, 190 lbs.), Middleton has a great motor and is tough to block. Good on his feet, Josh knows how to shoot the gap and disrupt things in the backfield. Bordman pays him the ultimate compliment when he says, “I wish I had 11 other guys just like him.”

Though he probably won’t be avail­able at the season’s outset while work­ing his way back from injury, look for 325-pound Jose Martinez to also be a major contributor upfront at some junc­ture. Simply put, Martinez is a space- eater who refuses to be moved out.

The Cougar line-backing corps is stout and should have a major impact all sea­son long. Junior Quinton Gaudet is a re­turning starter who really looks the part of an athlete. Well-proportioned at 6-2 and 200 pounds, Gaudet is a strong-side force who can rapidly fill on the run or blanket a receiver downfield. “Just a great player,” praises Bordman.

At the “Mike” slot is John Middleton. John is experienced, wraps up ball-carri­ers like a mummy and is adept at read­ing plays. On the weak side, senior Da­vid Parks will hold down the fort. Parks has ample size and relishes the chance to come up and make a hit. Parks is also an instinctive player who can get underneath routes and break up passes. “We’re putting some really good kids out on the field at ‘backer,” indicates Bordman.

The last line of defense, the second­ary, will be keyed by Jesus Barajas, who started as a sophomore. On the smaller side, the 5-9 Barajas is nonetheless a strong specimen who appears to be all muscle. A free safety, Jesus launches like a missile on the run and can unload when he gets there. Moreover, Barajas has good feet and can cover a lot of ground.

Another high profile back-liner is re­turning corner Edwin Vorachack. Tough to shake on coverage, Vorachack has looked outstanding in practice. Fleet and strong, this junior is capable of pressing receivers on the line or coming up to lay the wood on opposing backs. You could make a compelling case that Vorachack may indeed be Esco’s best DB.

The all-important kicking chores will fall to Isaac Moreno and the versatile McCoy. The junior Moreno, up from the jayvee squad, has a more than com­petent leg and is capable of reaching the end zone with his kickoffs. And inside of 40 yards, he can be reliable with his field goal attempts. McCoy is a splen­did punter who should average in the neighborhood of 40 yards per kick but he can also bomb it 50 yards-plus when he really connects. However, Kellen’s biggest asset is his ability to kick direc­tionally and to drop the ball into certain spots on the field. McCoy also gener­ates plenty of height, which allows for effective punt coverage.

The team motto that Bordman is pro­moting for the coming season is “All In.” If the Cougars buy into that con­cept from a standpoint of commitment, effort and fervor, the prospects for a successful season are more than realis­tic.

One more thing to bear in mind, over the last three seasons there hasn’t been a whole lot to celebrate in Cougarland. As such, the team’s psyche had been somewhat muted and tamped down. But Bordman wants that to change. He wants his guys to rediscover the joy of the game and when someone makes a notable play, the coach expects his teammates to get fired up over it and offer congratulations. “We need to have some hootin’ and hollerin’ going on out there,” Bordman says. “And we’re going to start having some fun. I want guys who aren’t afraid to put it on the line and wear their heart on their sleeves.”

Bordman is intent on changing both the vibe and culture at Esco High. Based on the impression that he left with this writer, don’t be at all surprised if he does exactly that!