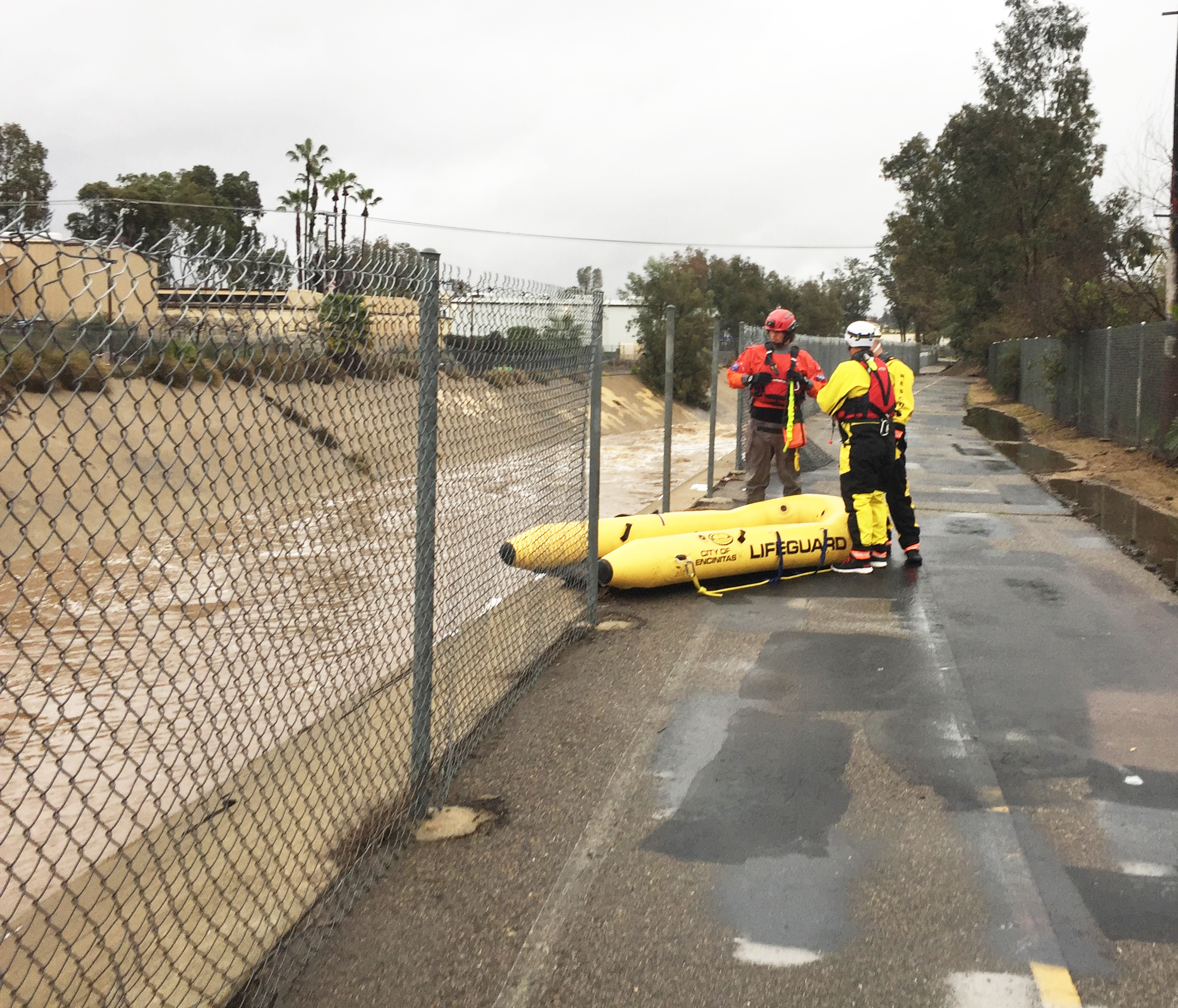 The swift water rescue team preparing to go into the Escondido Creek channel to attempt to extricate a man, 62, who had entered the swift running water with a paddle board. Photo courtesy of the Escondido Fire Dept.

A 62-year old man who, says one unconfirmed report, lived within sight of the Escondido Creek, near Citrus, may have watched it flowing like a raging torrent past his home Thursday afternoon, February 14, and for some reason was drawn to enter that maelstrom on a paddle board.

The man, James Michael Miller, entered the creek from the Rose Avenue entrance and was later recovered about four miles away, near where the Creek crosses under Tulip. He was pronounced dead at the scene.

Miller was the owner of Frontier Fence in Escondido. According to some who knew him, he liked the water a lot, and, said one, “He liked a challenge.”

According to witness reports, Miller was swept away almost immediately upon entering the water.

Several hours later teams with the San Diego Fire-Rescue’s Swift Water Rescue Team recovered Miller’s body. The Escondido Fire Dept. began getting calls about 4 p.m. when a caller reported a man on a paddle board (the report The Times-Advocate heard was of a man in a kayak) being swept away by the water.

He was recovered from the channel near Tulip about 6:15 p.m. About 70 firefighters were ultimately involved in the effort.

Swift water rescues in San Diego County are rare.  You need swiftly moving water to conduct one. So this one was an opportunity for the teams based in San Diego to test their training in a real situation.

Jeff Sargis, a battalion chief with the Escondido Fire Dept. was the incident commander on Thursday. He described the operation.

“I established an incident name, ‘Water IC’ and then I deployed the incident command system. Ordering resources, I ordered the swift water teams. Two total. These are teams that lie in the background in our system and get put into an operational mode when they are needed,” said Chief Sargis.

One came from CalFire and the other from Northcom, i.e.  the Communication Center for North San Diego. It includes firefighters from such communities as San Marcos and Carlsbad, and also life guards.

“It’s a huge task,” said Sargis. “Because of safety issues and rushing water this incident  required a large number of personnel. In all, 70 firefighters. That includes a strategic plan for placing firefighters at downstream locations  in the events one of our firefighters gets rushed away or the victim changes his location.”

The flood channel where the incident took place was one where these teams train and practice, “and which I have done for more than twenty years,” he said. “All the channels feed this channel. It runs from east to west, down the center of the city, from Valley Center to Harmony Grove. The victim went into the channel on the east side of town near Rose. We ultimately found him close to Tulip Street. Four miles away.”

Sargis continued, “There were periodic spots where we were able to see him floating by. Ultimately, he landed in some brush and weeds. It was easy to see, but it was in the center of channel.”  So it was very hazardous to get to him.

Once it became obvious that the victim wasn’t alive, the team transitioned from rescue to recovery, which is a slower process. “It took about three hours because we were setting up and waiting for resources and setting up adequate safety systems,” said Sargis. “Had we an opportunity to make an emergency rescue it would have gone quicker but it was a recovery at that point.”

Even so, it wasn’t immediately obvious that Miller was no longer alive. “While he was traveling, we were trying to throw ropes if he was able to catch them. But once he became at a static location, that’s where it became fairly obvious.”

No one likes to see someone they hoped to rescue alive not make it. But Chief Sargis says that under the circumstances, “I couldn’t be happier. We had roughly seventy people and this event incorporated a multi-agency organization. The task of recovery came together flawlessly as if all the agencies work together all the time.”

He added that he has never seen a situation quite like this. “That might have been a unique one for me because it was a dynamic movement in the flood channel. We were really working to stay ahead of the problem,” he said. “The fact that the multiple agencies came together to accomplish common goals—That was really impressive.”