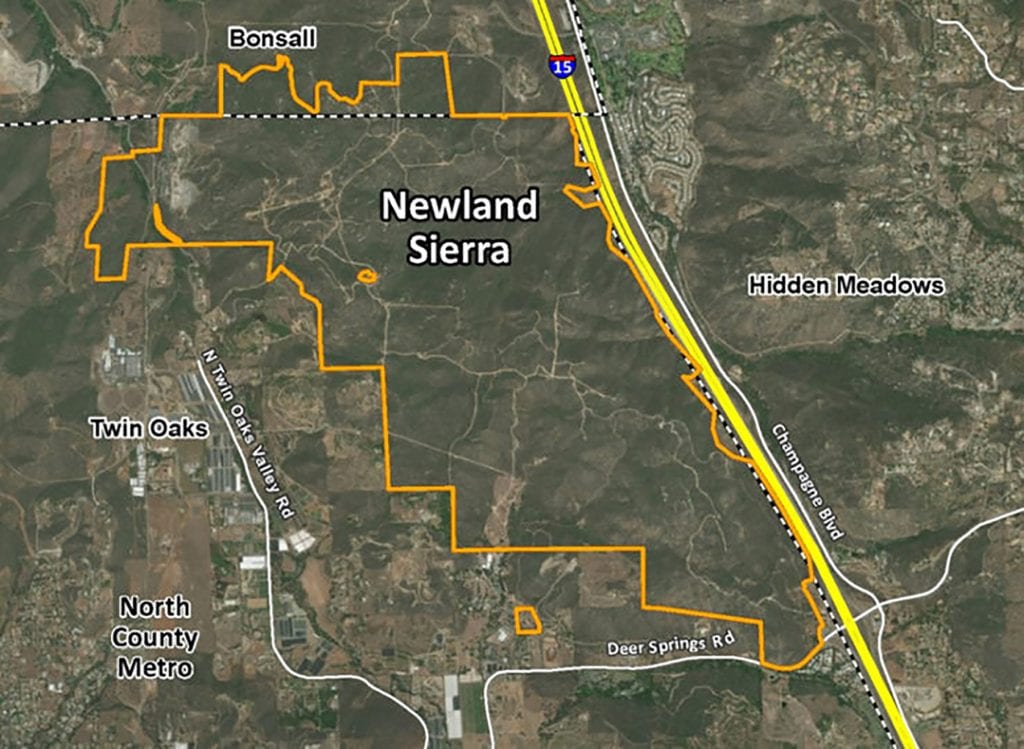 A map of the Newland Sierra development.

The San Diego County Board of Supervisors voted 4-0 Wednesday, Sept. 26 to approve the Newland Sierra project that plans to build 2,135 homes, commercial space, parks, trails and a school site in North County along Interstate 15 near Escondido and San Marcos.

The Newland Sierra project is planned to be built just west of Interstate 15 and five miles north of Hwy 78. It will include 1,140 single-family homes and 995 multi-family townhomes, all with solar rooftops, in seven neighborhoods.

The project will also feature a 58.3 acre town center, where 95 of the 995 townhomes will be built, along with 81,000 square feet of commercial space that the project’s representatives say will be anchored by a grocery store, and a six-acre school site.

The project will also include a 1,209-acre biological preserve, nearly 36 acres of public and private parks, and 19.2 miles of multi-use and community trails.

The project is also close to local transit, including the North County Transit District’s Sprinter rail line, and California State San Marcos and Palomar College. The project is expected to be built in two phases over about 10 years.

A critic of the project, Jacqueline Arsivaud, told the newspaper, “Expected outcome but the wrong solution to the problem the 4 supervisors highlighted: lack of housing the average San Diegan can afford. If the supervisors were serious about actually solving that issue, they would enforce the mandate in their own General Plan that large GPA include an affordable housing component, but yet again, they choked and missed an opportunity. Instead here is another gift of taxpayer dollars in future infrastructure, while not recouping any of the added value they just gifted the developer by multiplying their property value many fold.  The era of building 1970’s style greenfield mega sprawl projects is over.

One response to “Board of Supervisors approve 2,135 home Newland Sierra project”