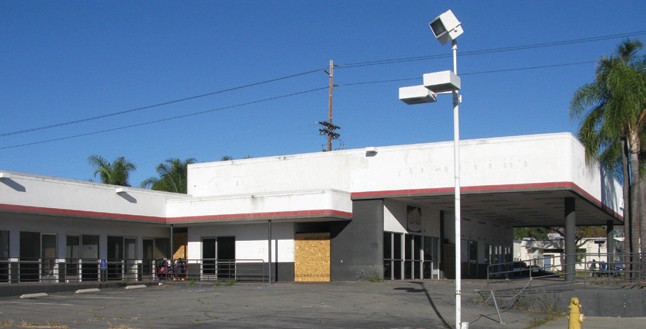 The former service building, above, for Toyota of Escondido has sat empty for several years. Neighbors say homeless people have been living in and around the site’s empty repair bays and buildings.

The Escondido City Council gave final approval of an Environmental Impact Re­port for a shopping center at terminus of the 78 Freeway at Broadway on Dec. 9. Building of a supermarket and restaurant are expected to start in spring of 2016.

The 3.7 acre center to be known as Counterpoint 78 will have a 4,800 square foot supermarket and a 3,200 square foot restaurant and 195 parking spaces.

Frank Turlo, who has spent 20 years running the Auto Thrift used car lot across the street from the project, addressed the council:

“This has been an eyesore that has been held over our heads for the last 10 or 11 years,” he said. “It’s time and I’m happy for it. I’m looking forward to there being a nice looking business on that corner.”

The corner lot at 925 N. Broadway has been occupied by a closed Toyota of Es­condido site for many years.

Jim Simmons, representing the Pacific Chasse Development of Santa Monica, told the council that the company is talk­ing to Starbucks and Sonic Drive-in, about taking the drive-through restaurant spot on the eastern side of the property.

The restaurant space is suited for a “quick-service restaurant (e.g., taco shop, hamburger shop, or coffee shop) with a drive-through,” according to a city plan­ning document.

The west side will be occupied by a super-sized El Super grocery.

After the measure passed 4-0 with Councilwoman Olga Diaz absent, Sim­mons said, “This is a Mexican neigh­borhood so it will fit right in. The El Super is more like a Sprouts or a Whole Foods.”

The plan includes putting new traffic signals at Broadway and Lincoln Avenue, the first street parallel and north of the 78. The new corner will have new storm drains and pedestrian traffic controls.

Councilman Ed Gallo, who said he was a groceryman “in another life,” ex­pressed concerns about parents picking up children from Lincoln School, which is parallel to the project across Lincoln Ave. He said grocery deliveries usually occur at night and that he never allowed deliveries after 9 a.m.

He said, “I’d really like to see a (street) sign that says there’s school here,” refer­ring to the elementary school across Lin­coln Avenue from the project.

The sidewalk on Broadway will be eliminated and pedestrians will cross Broadway on the north side of Lincoln and on the east side of Broadway. To meet the requirements of the EIR, the corner of Lincoln and Fig street will be widened to create a eastbound right turn lane.