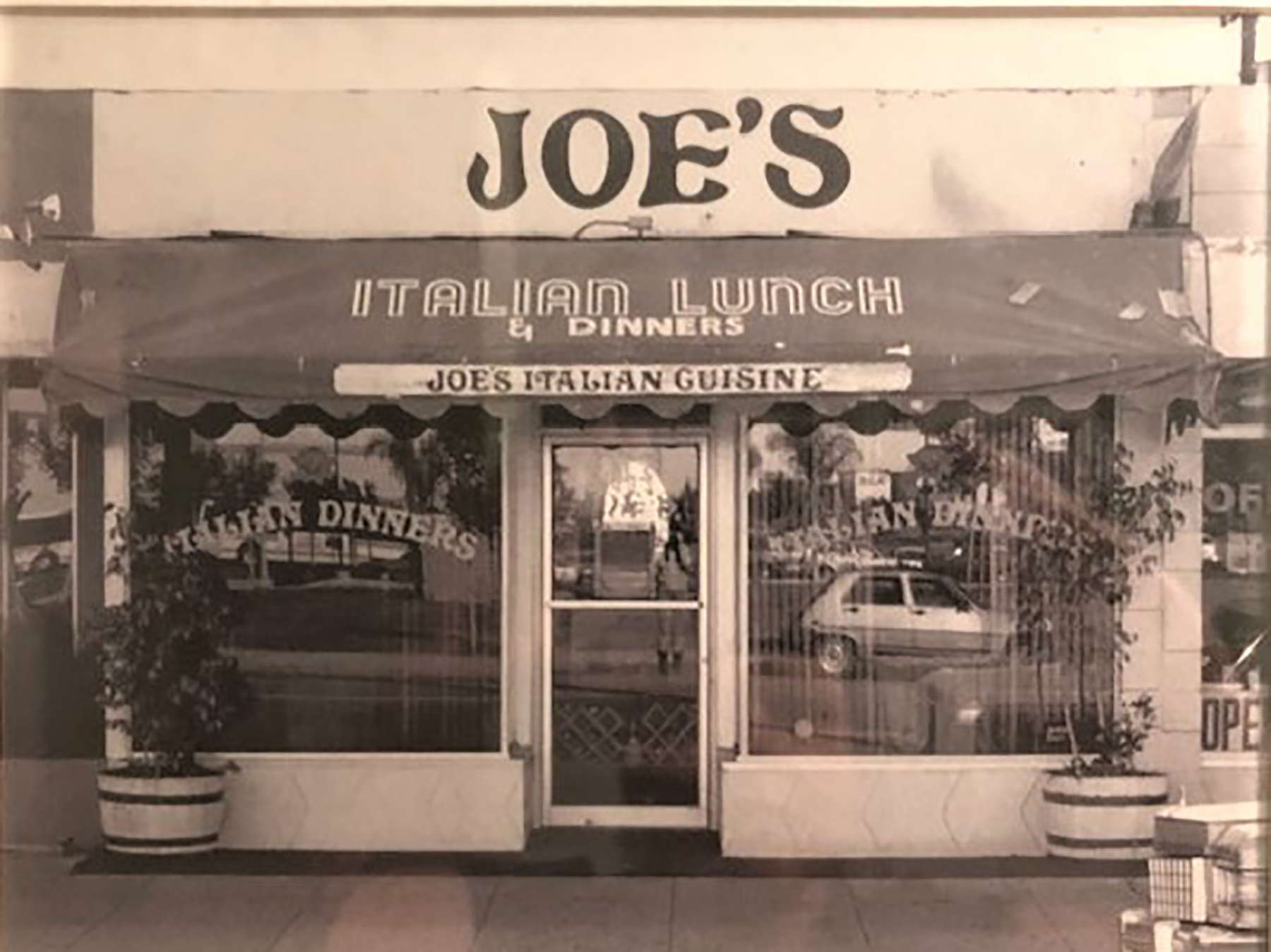 The facade of Joe’s Italian Dinners in the 1980s along Grand Avenue.

Not long after turning off Escondido’s Centre City Parkway onto Grand Avenue you can find Joe’s Italian Dinners. Look for the red script “Joe’s” with green accent neon over a blue background sign, plants on top of wine barrels at the gateway and a red scooter decorating the entrance.

At Joe’s, you have found fine Italian dining, warm friendly service and intimate, cheerful décor in the heart of downtown Escondido.

Giuseppe “Joe” Onda was born in the small town of Serra San Bruno in the Calabria region of Italy. His father was a travelling fabric salesman and his mother a homemaker. Joe lived in a small one bedroom home with his parents, four brothers and one sister, Joe being the youngest.

As a teenager all Joe wanted to do was play soccer and work on cars. His brothers and sister were attending college or in the service and Joe’s parents worried that Joe’s future was limited in Italy. When Joe turned 18 his parents sent him to America, to see what he could find.

Joe flew into New York and then across country to San Francisco. Joe found work as a dishwasher in restaurants and enrolled in classes to learn to speak English. He became interested in kitchens and cooking and stayed long after his shifts were over as a dishwasher to learn how to cook.

Joe met Mary, a native San Franciscan and they soon began dating. Mary’s parents had passed away when she young. Joe and Mary were soon married in Reno, Nevada at a small celebration attended by their few area friends as neither had family near.

In cooking, Joe had found his passion and had built a solid foundation of food preparation skills. Joe was a natural when it came to creating amazing dishes and he and his spouse Mary soon decided it was time to open their own restaurant – LaBella Pizzeria on Silver Avenue. 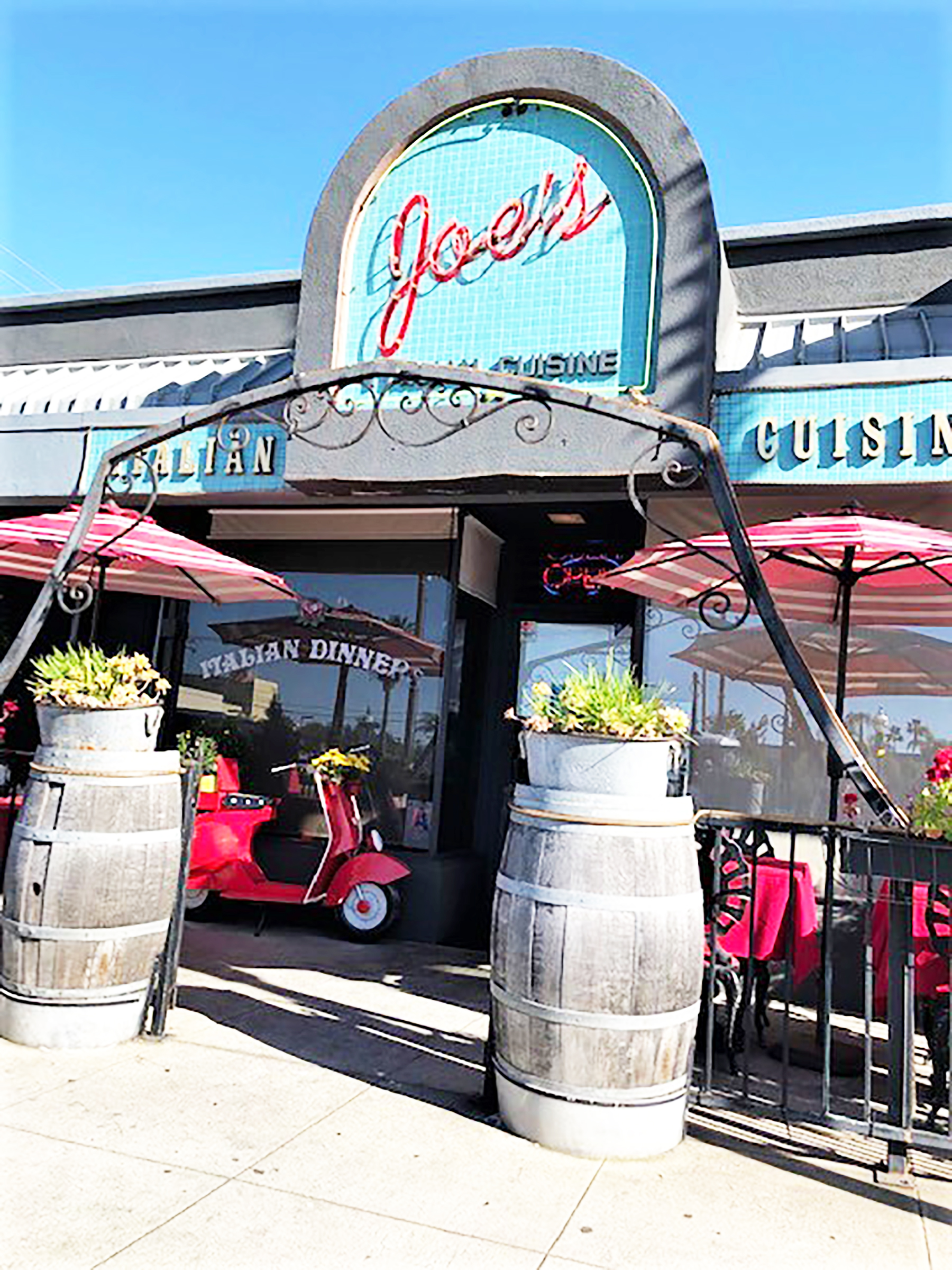 The facade of Joe’s Italian Dinners.

The restaurant was a success but now Mary and Joe had two children and were looking to move away from the big city. Friends had recently moved to Valley Center and were describing the rural beauty of the area and how perfect a place the area was “to raise children.”

That was October of 1980, Joe’s on Grand Avenue in Escondido was opened. Joe and Mary’s daughters, Adina (then six) and Angelina (then one year old) were soon going to schools in Escondido. When the girls were 18 and 13 they both worked in the restaurant as a server and a busser. Both girls attended college and went on to open businesses of their own. Adina started a floral business specializing in weddings and events and now has a storefront next to the restaurant. Angelina opened a home based photography studio specializing in portraits, wedding and events and continues to work in the restaurant. Both are married with children of their own.

Joe’s, like nearly all successful businesses, gives back to the community through support of numerous charitable events and fundraisers for schools, colleges, service clubs and more.

Celebrity diners have included NFL Charger players, city mayors and other city officials and actor Abe Vigoda, from the television hit “Barney Miller” and the movie “The Godfather” fame!

Psst! Come closer and listen. Angelina has a secret to tell you…

“At two of the booths on the left hand side of the entrance a drawer can be found above the table, in the wall. One of the restaurant employees, Jeff watched a little boy write out a note and slip into a drawer. After the family left Jeff went to the drawer to see what the boy had written. It was a treasure map and included a treasure of a one dollar bill! Jeff noted that he had found the treasure and added another dollar hoping that the boy would return and find his treasure doubled! The boy never returned but the treasure lived on and grew as more people found the note, added their own thoughts and more money.”

“Now the drawers are filled with notes,” says Angelina. “The notes usually commemorate celebrations of one kind or another. A birthday or anniversary or a special memory but some describe hard times they are going through. Some are deep, some lighthearted! And the drawer has also helped make a love connection, where a gentleman saw a lady, dining alone, who left a note. He found her note, added his number. She found the note on another visit and actually called him! Later we found a note left saying they had married! We don’t know their names but now they leave a note on their wedding anniversary!

Joe is showing no signs of wanting to retire but if he chooses to, Angelina is ready.

In the meantime come by. Enjoy fabulous veal or chicken dishes. Chicken Piccata, Canneloni and Lasagna. Homemade Bolognese sauce and meatballs. As Joe says “All of our food is cooked to order and takes time. Please be patient.” It’s worth the wait.