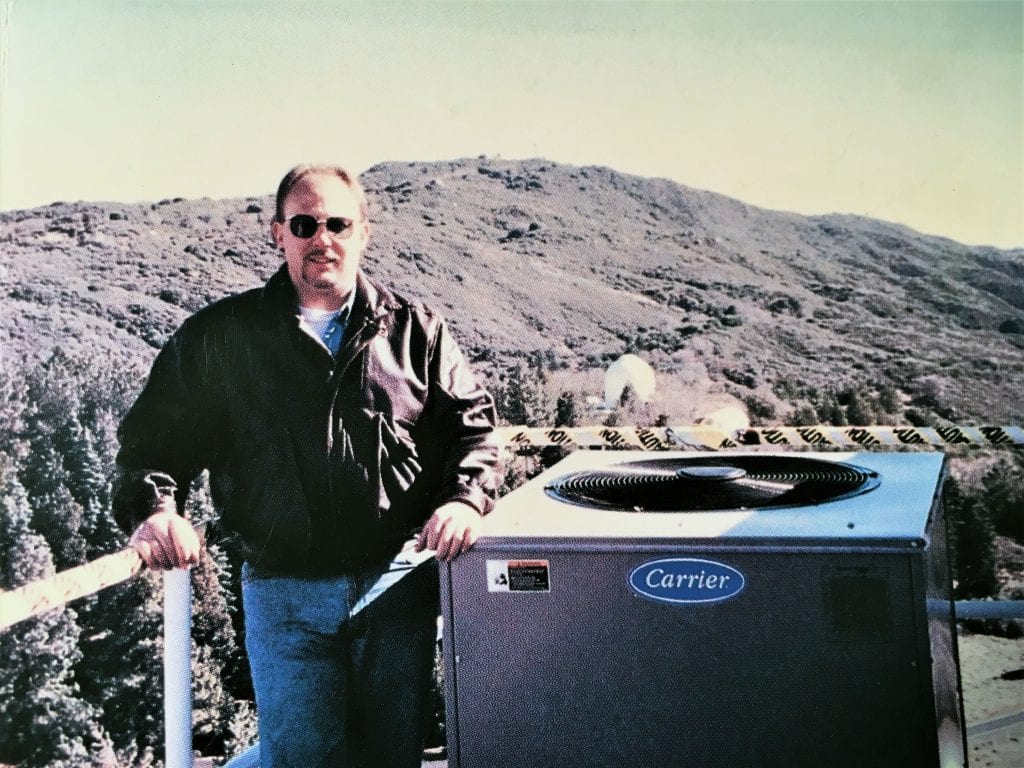 In 1963 Dick Lott and Ed Aeling found themselves in a difficult situation. The company they worked for, Oceanside Air Conditioning was about to go out of business.

Rather than leave Escondido, where they had been working, they decided to buy the Escondido branch operation of the company and go into business for themselves. They opened as Aelott Air Conditioning – Aeling and Lott.

Ed Aeling is from Dover, Ohio; near Canton, Ohio (home of the Pro Football Hall of Fame.) His father was a grave digger for burial vaults. Ed left high school in the tenth grade and enlisted in the Navy and was stationed in California where he served as a medic with the Marines at Camp Pendleton and on various ships. Ed completed his GED while in the Navy.

It was 1953 and Ed met the love of his life, Kitty at a USO party in Los Angeles. Three months later they eloped to Las Vegas and married on Halloween. Rich Aeling says dad used to say, “She tricked him and he treated her.”

Ed left the Navy after four years but stayed in the San Diego area working with Baker Roofing and Sheet Metal in Oceanside, then with Reliable Sheet Metal in Encinitas before moving to Oceanside Air Conditioning and then buying the Escondido operation with Dick Lott and changing the name of the business to Aelott Air Conditioning.

Aelott became a very successful business. They quickly outgrew the small metal building in which they started and in 1967 they built a new building at 825 West Washington Ave. in Escondido.

The company continued to grow and in 1974 Dick and Ed built another new and larger building at 812 West Washington (their current location today) across the street from their former location.

They completed this building just in time for the 1974-75 recession! Needless to say, the resurgence of the residential market over 1976-77 became a welcome boon to Aelott.

Ed bought Dick’s interest in the business in 1980.

Ed was a believer in buying land. Raw land. “Buy land; they don’t make it anymore” as Mark Twain said.

Ed would save money and then buy lots. Over time he acquired several. Rich remembers only one of the lots having any development – a small home with a garage conversion. The family lived there for many years. Rich recalls sharing that converted bedroom with his three brothers! “It was a very small house” he recalls. Rich also recalls “Dad raised chickens on the property and would sell their eggs to local Realtors.”

Turns out the lots were adjoined and were along the Highway 78 corridor in what became known as the Melrose area. Vista wanted a new courthouse and there was a lot of interest in developing the surrounding area and Ed owned the desired property. It was a good thing.

Ed was a family man. Married to Kitty (Dorothy) with five children.

In 1986 Ed’s oldest and youngest son’s, Chuck and Rich purchased their father’s interest in the business and became Aelott’s new owners and Ed and Kitty began the first of many travels in their motor home across the U.S. with a lot of trips visiting family in Ohio.

Ed passed in 2005 and was survived by spouse Kitty, five children and ten grandchildren.

Like a lot of successful businesses Aelott gives back to the community.

Ed was a long time Escondido Chamber of Commerce Ambassador and a member of the Escondido Rotary Club.

Chuck is also a member of the Escondido Rotary Club and has been a Boy Scout leader since 1987. He and his spouse Gail were active in the in the Escondido High School Booster Club. The couple have two children, Kevin and Dennis.

Rich is very involved in the Escondido Chamber of Commerce, the Boys and Girls clubs and the Escondido Sunrise Rotary. Rich and his spouse Donna have three children, Danielle, Erin and Lauren.

Visit the Chamber. You may be greeted by Kitty Aeling, the Chamber’s 2019 Community Volunteer of the year!

Over the years, Aelott has taken on many memorable installations. The Palomar Family YMCA Teen Center, the James Architectural Building on Broadway but one of the firm’s most challenging projects came in 1997 when Aelott installed twenty tons of air conditioning on the roof of the Palomar Observatory.

“We had to bring in a helicopter to set the units in place,” Rich recalls. “At one point the units were suspended 150 feet in the air, directly above the telescope, it was really something to see, “he says.

Will there be a third or fourth generation at the helm? So far no, but it’s early and it’s a big family. 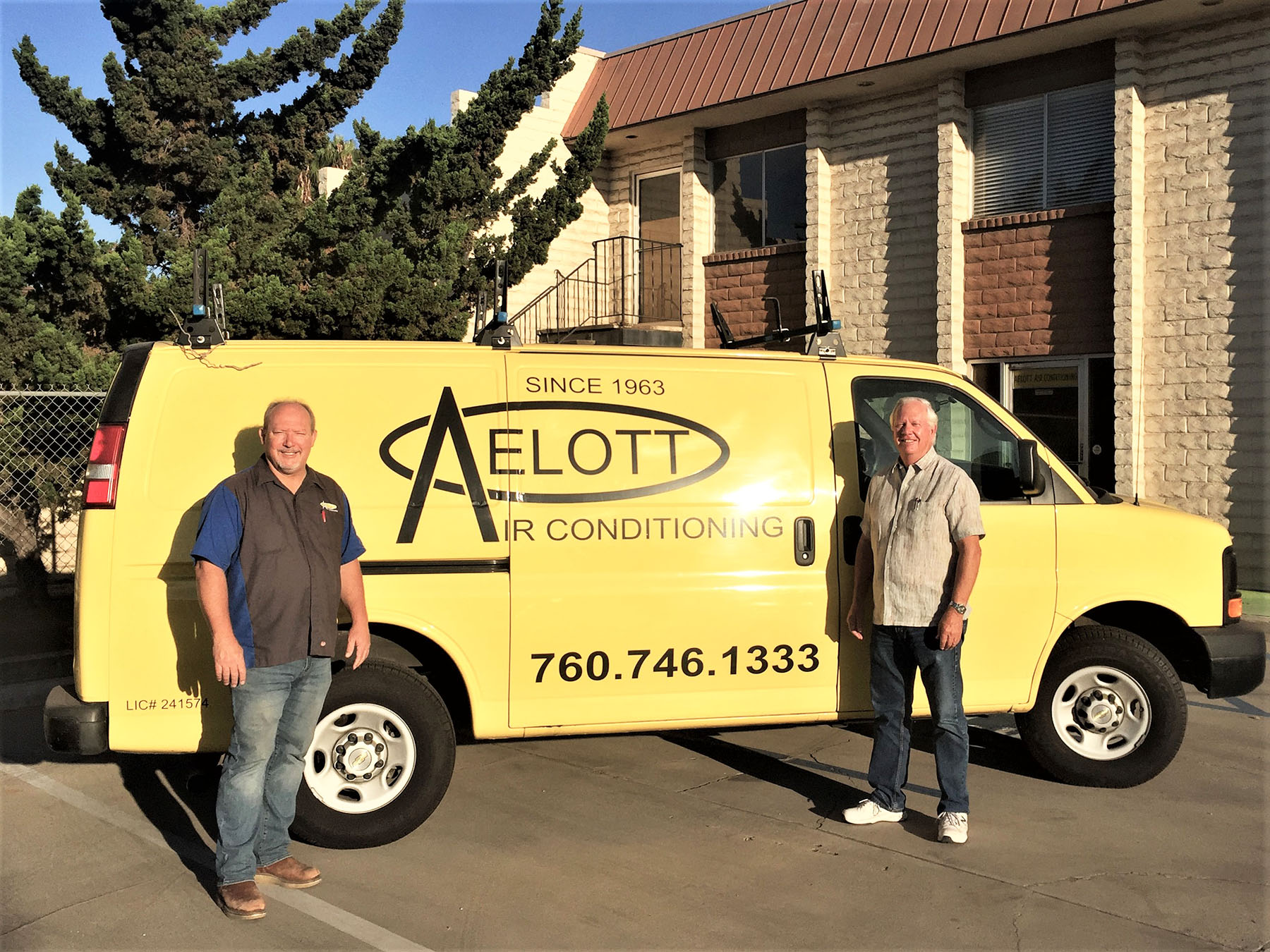 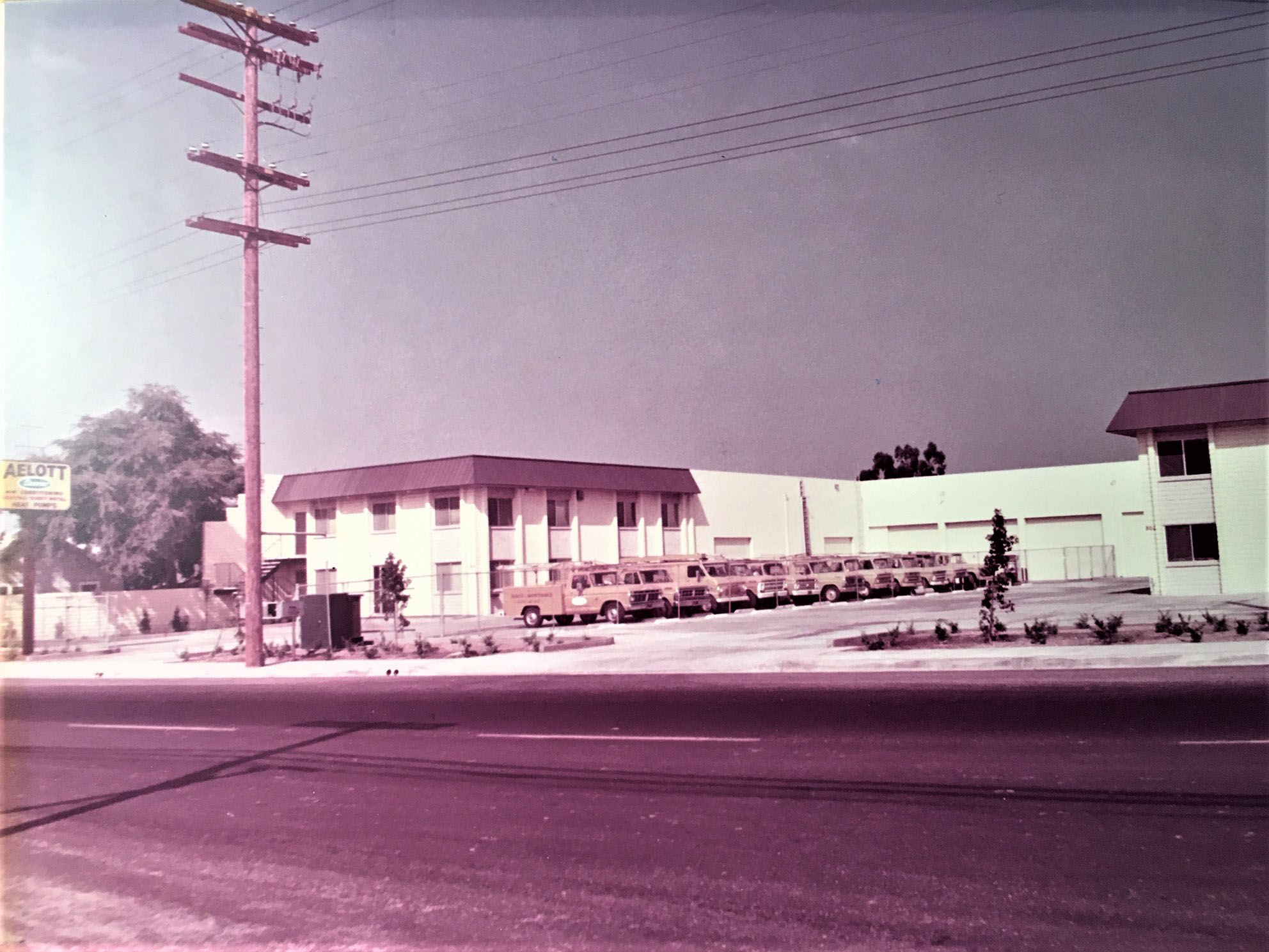 Circa 1974, one of Ed Aeling’s favorite photos, showing the “fleet.” 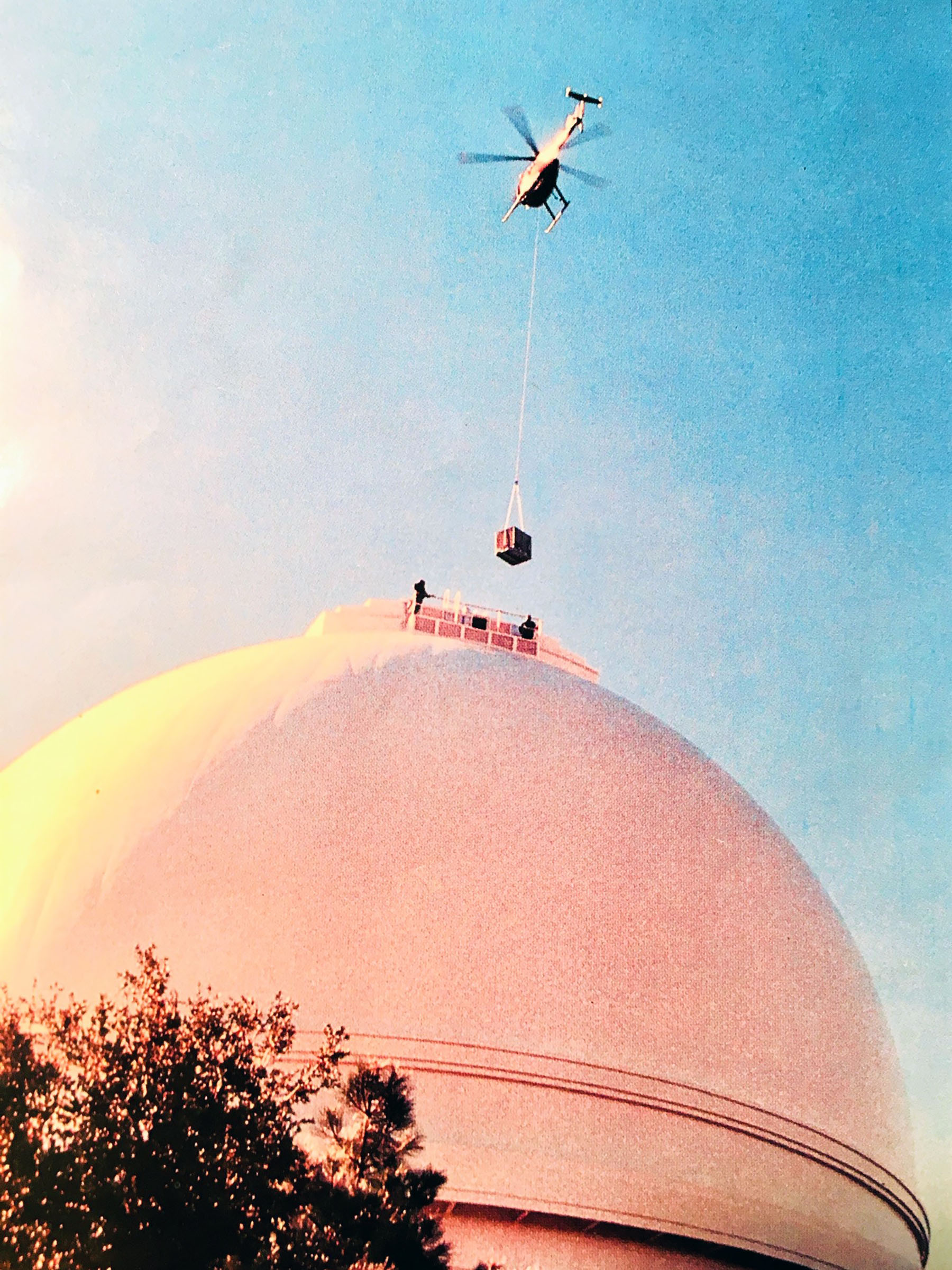 In 1997 a helicopter was used to bring 20 tons of air-conditioning equipment to the top of Palomar Observatory. 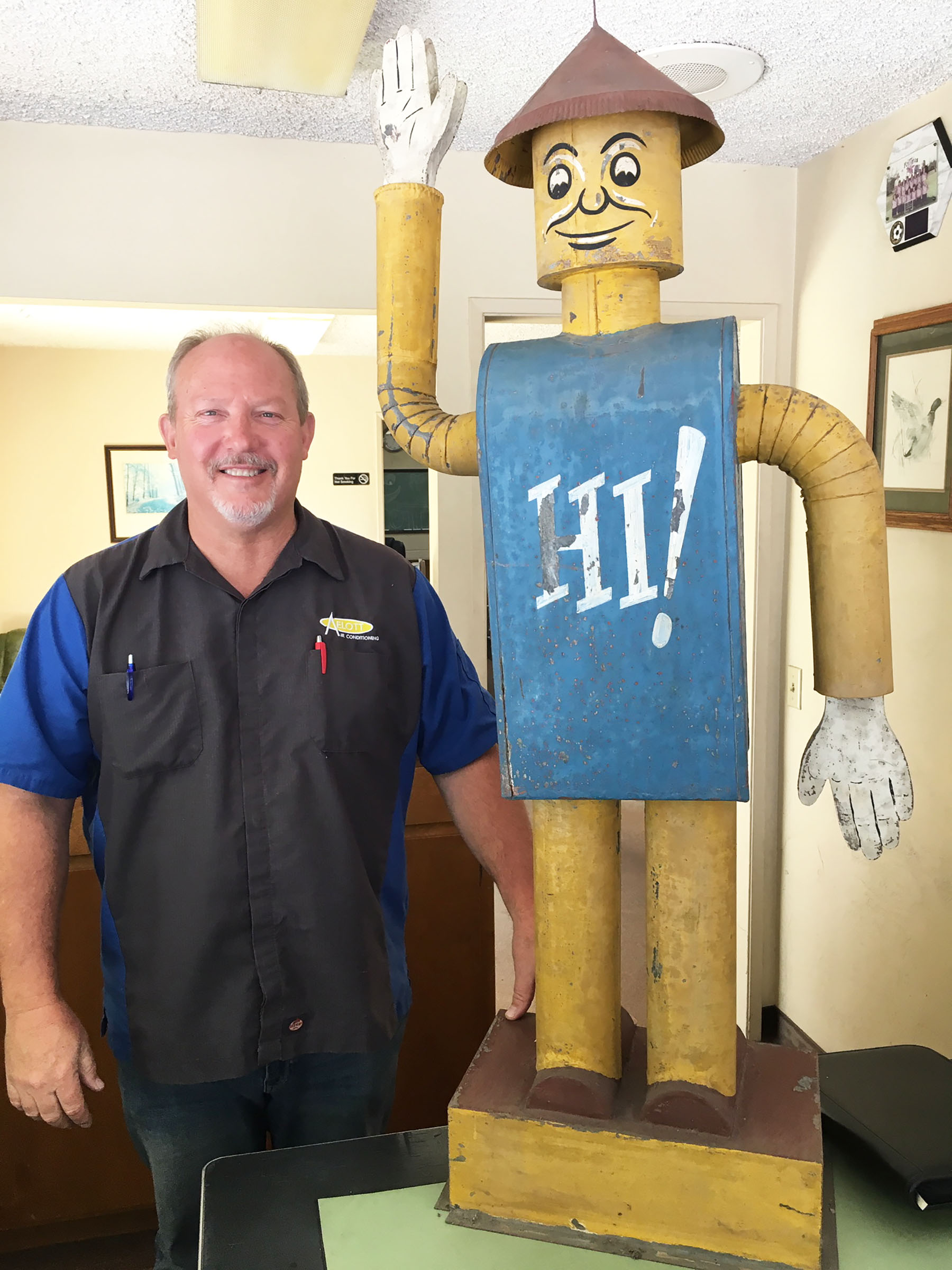 Rich Aeling and the Tin Man, built in the 1960’s by father Ed Aeling.