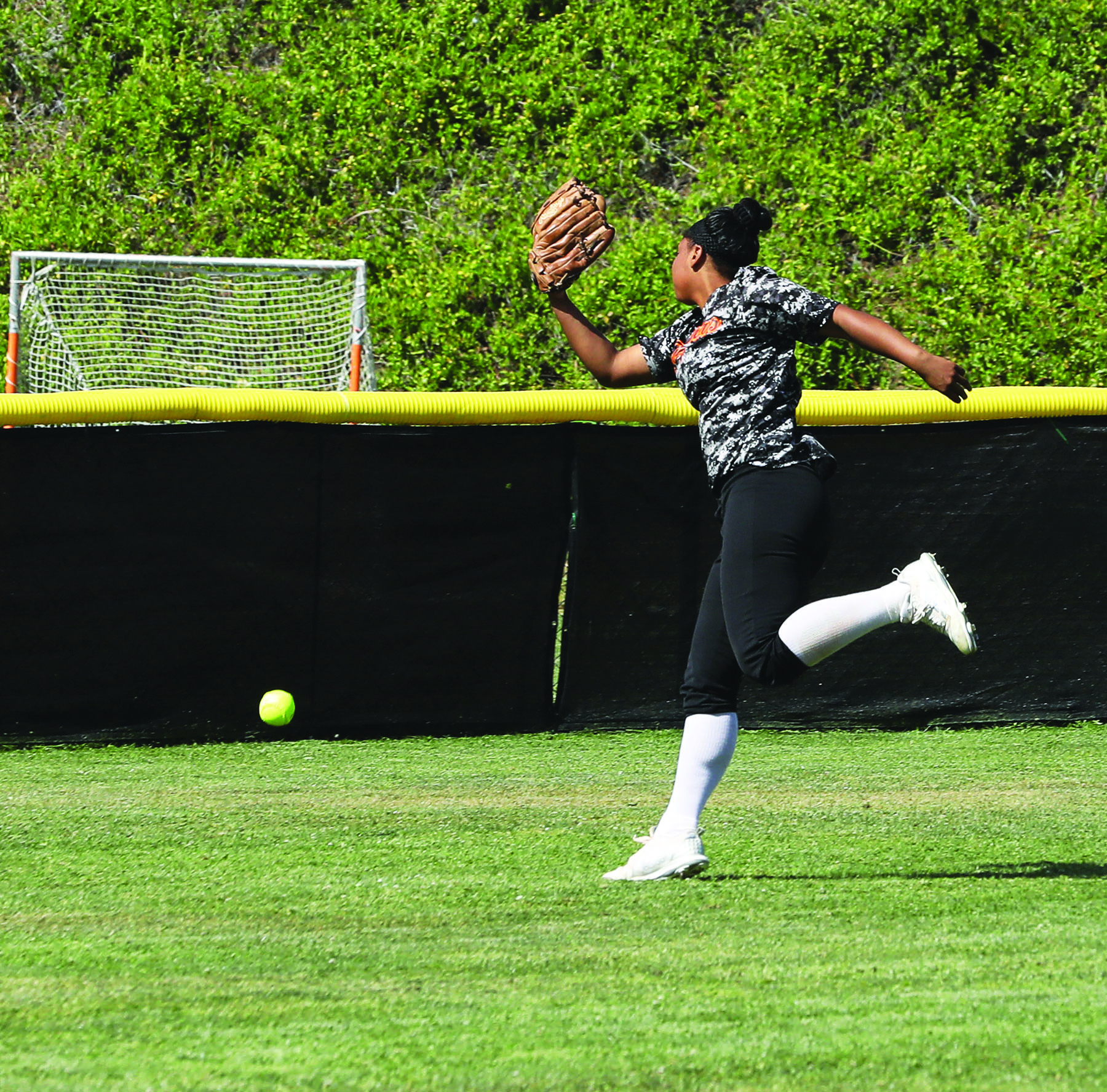 Despite a valiant leap, Esco outfielder Xzarria Simmons couldn’t come up with this booming double off the bat of MacKenzie Olivo. 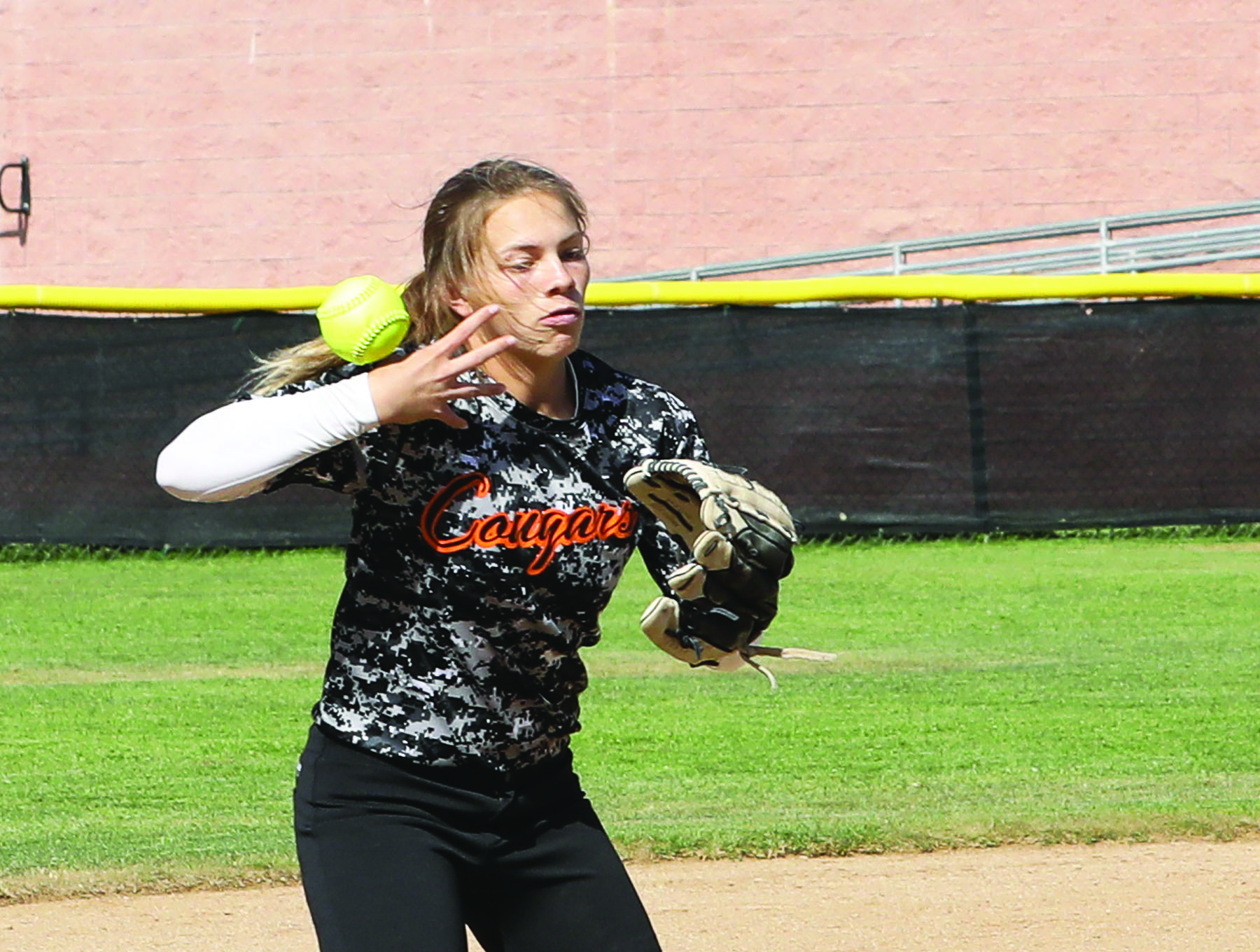 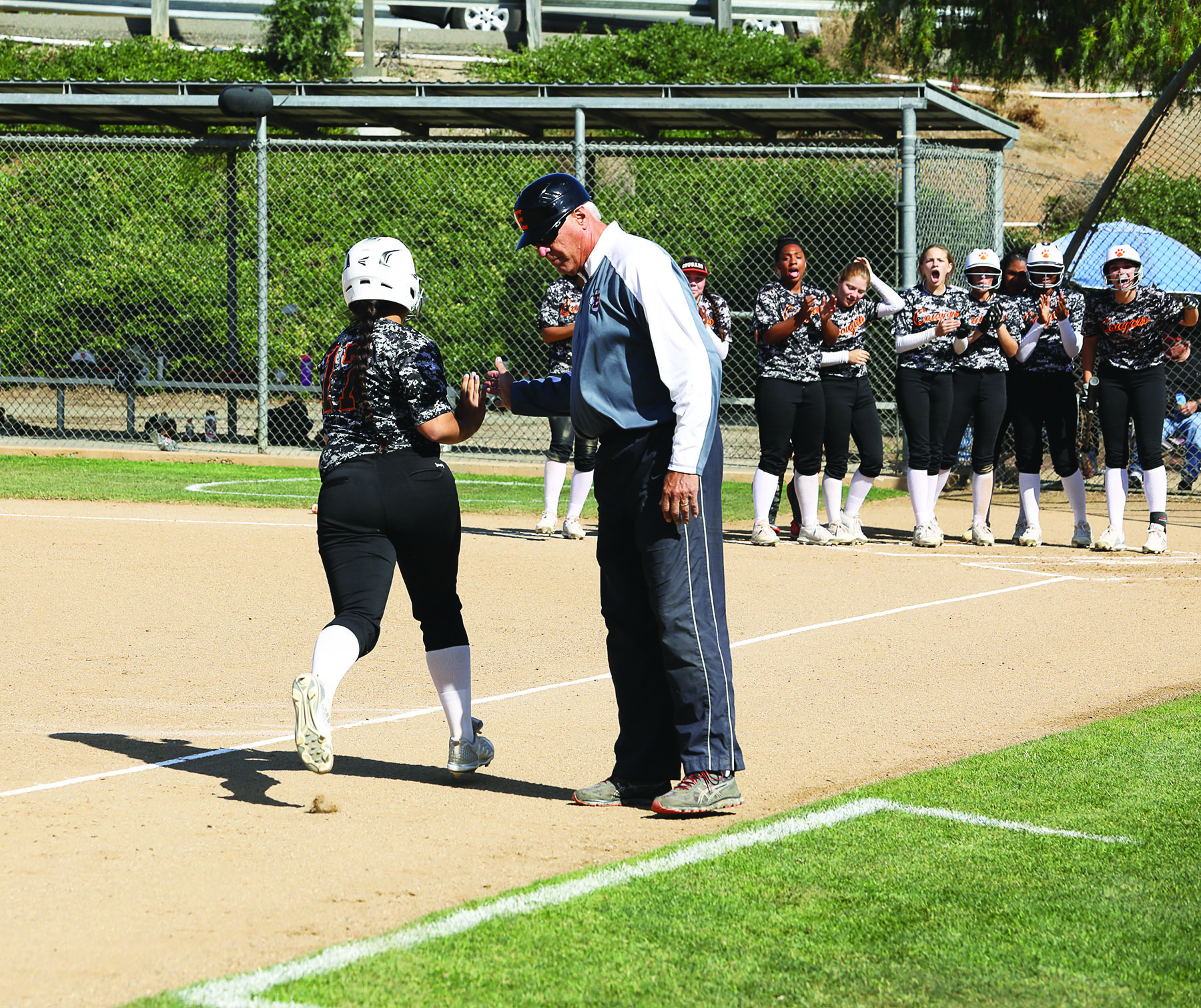 After getting a glad hand from coach Cary Weiler, Escondido’s MacKenzie Lefebvre heads towards a hero’s welcome at the plate after swatting a two-run home run.

Presented with an opportunity to take over first place in the Valley North County (League) and to continue building on a very solid season that has seen it generate some Division I notice, the Escondido High softball team was looking to notch its 14th victory against eight losses when it traveled up the hill to take on neighboring rival Valley Center last Friday afternoon.
And through three-and-a-half innings of play, Esco’s prospects appeared to be most promising. Due to Mackenzie Lefebvre’s booming two-run homer and steady pitching from right-handed starter Hannah Ice, the Cougars owned a 2-1 lead and seemed poised to maintain their mastery on the road, where they had captured six of seven games.
But then, in what felt like a flash, the game’s momentum flipped in the bottom of the fourth. A shaky Coug defense that gifted three infield errors offered VC a golden opportunity to strike back and the Jags took full advantage of this welcomed chance.
First it was dynamic freshman Annabelle Dixon who inflicted some heavy damage when she ripped a double into right-center field that scooted all the way to the fence and plated three runs. Up next was talented Katelyn Dunckel and she drove in two more with a smash that easily cleared the outfield fence in left. And just like that, thanks to a five-spot, the Jags (8-8, 2-2 in VL play) had seized a sizeable lead and were well on their way to an eventual 10-2 victory.
The Jaguars were to emphatically put things away with another outburst in the sixth and once again it was the youngster Dixon who was at the center of things, blasting a three-run shot off of reliever Lefebvre that vacated the park in one heck of a hurry.
Though Dixon was clearly a headliner with her 6-RBI performance, Dunckle also sparkled in the Jags’ win. In addition to drilling a homer and narrowly missing another by less than a foot, the VC junior was also a standout on the mound, pitching a complete game while yielding a mere five hits, striking out four and walking just one batter. Moreover, three of Dunckle’s punchouts came at telling times, ending innings when Esco had a runner onboard.
A major key to Dunckle’s success was her ability to keep the accomplished duo of centerfielder Xzarria Simmons and Rylee Penrod, each of whom was named to the Union-Tribune’s preseason players to watch list, relatively quiet. Simmons went 0 for 3 with a pair of groundouts while Penrod did manage to produce a line drive single down the line in left and coax a walk. But significantly, Dunckle kept Penrod from going deep, something the Cougar junior did on eight occasions in 2017.
Besides Lefebvre’s big poke, Ice, Kayla Carter, Penrod and Kylee Rogers were the other Cougars able to manufacture hits but Dunckle was masterful in spreading them out and in no inning did Esco deliver more than one safety.
On the bump, it was an unlucky outing for the right-hander Lefebvre. Though she yielded five runs in her 3.2 innings of work, only one of those tallies was earned and with better defensive support, Lefebvre would have certainly experienced a much different fate.
With the loss, the Cougs missed out on a chance to climb atop the VNC(L) standings and remained in second place at 3-2, a half-game behind the 3-1 Ramona Bulldogs.
But as it stands, Esco is still in a mighty good place. Coach Cary Weiler’s team is well positioned in league, has demonstrated it can win with regularity and looks like a lock for the postseason. Those are some definite positives upon which to build.
Friday just happened to be one of those days when it didn’t come together thanks to a tough opposing pitcher and a precocious freshman who swung a bat that was sizzling.
The Cougars will look forward to getting back on track this week when they host Rancho Buena Vista before traveling to Fallbrook.