“Big Fish” is big entertainment with a deeply emotional core 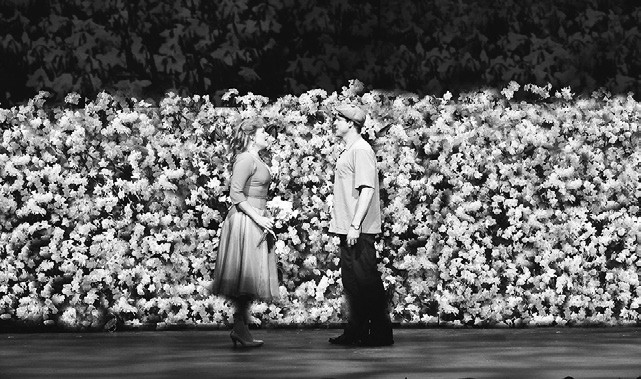 Will Bloom and his future wife meet amidst a field of daffodils.

Will Bloom is getting tired of his dad’s tall tales and endless stories that always have him, Edward Bloom, as the hero. As he prepares to get married, the sophisticated younger man, played by Patrick Cummings wants his dad not to make any weird, narcissistic toasts at his wedding and to keep his stories to himself.

Edward Bloom, played by the very appealing actor Josh Adamson, is a man who can’t help but live large, even if it’s only in his imagination (or is it?). He’s not a Walter Mitty, endless day dreaming about making a somebody out of a nobody, instead he is an aspiring hero, who, like David Copperfield, seeks to be much more than a bystander in his own story, and throughout the boyhood of his son encourages him to “be the hero.”

As the story progresses, Bloom becomes ill and it becomes vital to the son to find out the real story of his bigger-than-life father and to separate the myth from the truth. Especially since he and his bride are expecting a child. However, the point of this story is that at some point the two become so entertained that it is hard to separate them.

No matter how big Bloom’s tall tales get, the stagecraft of the Moonlight takes him there in style. The staging is bigger than life, from the field of dazzling yellow flowers where he pledges his love to his future wife, Sandra, played by the longtime North County acting stalwart Bets Malone, to the lair of the witch who tells him his fortune, including when and how he will die.

Along the way Bloom meets a giant, a werewolf, a mermaid, and the woman he will build his life around.

It’s an amusing story, but it’s also a deeply affecting one; where you will find yourself being drawn into each emotional core.

“Big Fish,” now playing at the Moonlight Amphitheatre until September 26, is based on the Tim Burton movie, which was itself based on the Daniel Wallace novel.

As the director writes in his notes, the story revolves around two thematic questions: “Mortality, or how does a hero live on?” and “Fatherhood, or what makes a good dad?”