The final paving for the roadway is scheduled for this week.

Remaining work in August will be to complete paving and striping, energize the new traffic signal at the Bear Valley Park­way/ Boyle Avenue intersection, and com­plete the landscaping and irrigation.

According to County spokesman Gig Conaughton, “All of the barriers should be removed by the end of August and the fi­nal striping should be completed. The road should be fully functional by the end of the August, but the contractor may still need to perform isolated lane and shoulder clo­sures to complete any punch list items or perform maintenance of the irrigation and planting.”

The project will be substantially com­plete by the end of the August, except for construction punch list work, final cleanup up of the site and landscaping and irrigation work. After the landscaping and irrigation is finalized there will be a 120-day plant establishment period as part of the project. The official completion of the project in­cluding the plant establishment period is by the end of 2016.

The traffic signal for Boyle Avenue / Bear Valley Parkway intersection will be activated on Thursday, August 11. All new striping, signage and roadway markings will be installed by Tuesday, 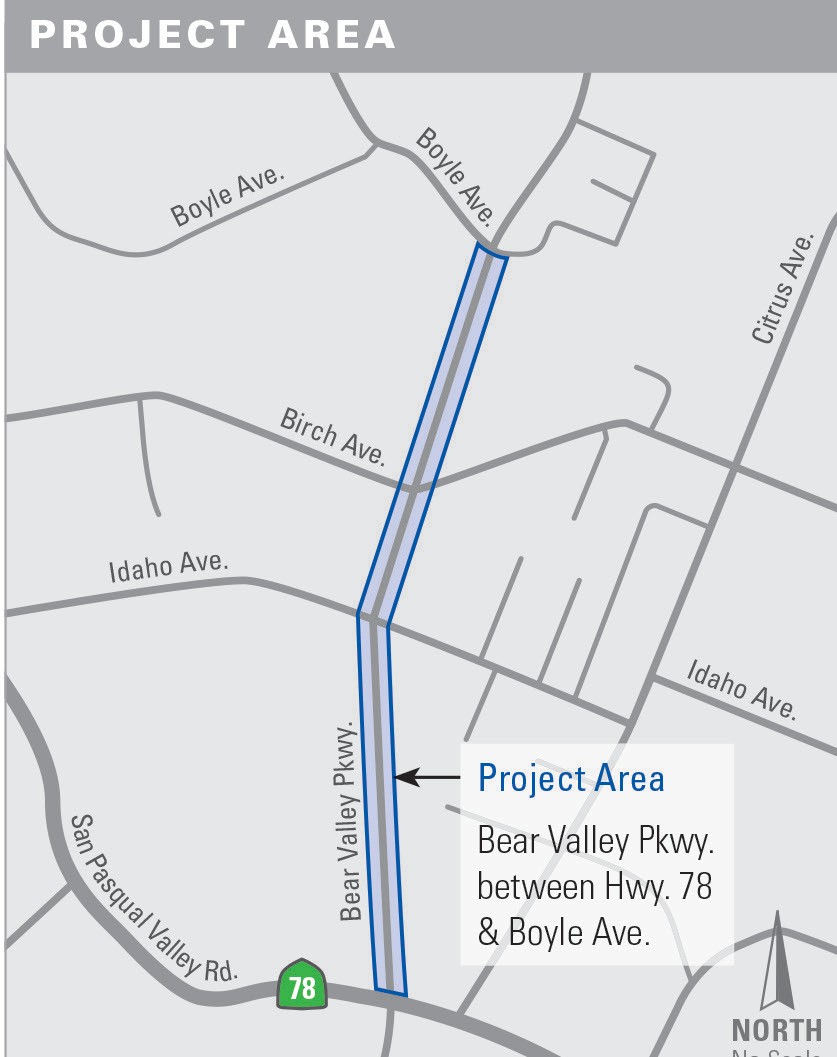 August 16, at which time all constructing traffic control devices will be removed for the final time.

This is a joint project of the city of Escondido and County Dept. of Public Works. The $15 million comes from Trans­net, Proposition 1B bonds and the city.

The project includes so-called “active” transportation features so residents will have better travel choices in the future. “Active” travels include walking, bicy­cling, and other means powered by human energy, like skateboarding and pushing handcarts.

The widened road will connect to the existing four-lane road within the City of Escondido to the north. Bike lanes, side­walks, landscaped medians and parkways, drainage improvements, waterline up­grades, and new traffic signals at realigned intersections will be installed as part of the project. Overhead utilities will be under­grounded as well.

The County used rubberized asphalt to complete the 1-mile-long roadway im­provements. Rubberized asphalt, which is made from a blend of shredded, used rub­ber tires, rocks and asphalt, reduce road noise from vehicles and keeps old tires from clogging up landfills. In this project, we used more than 6,000 tires — over 66 tons of rubber (based on the idea that the average car tire weighs about 22 pounds) — that otherwise would have taken up space in a landfill.