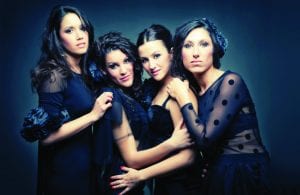 The California Center for the Arts, Escondido will welcome an evening of culture, dance, and masterful music from one of Barcelona’s most inspiring groups – Las Migas. October 21 at the Center’s outdoor Lyric Court.

Since 2004 Las Migas has been wowing audiences all over the world with their unique arrangements, and moving vocals. Often described as Spanish inspired Mediterranean poetry for the soul, Las Migas is a force to be reckoned with on stage. Las Migas’s latest CD, “Vente Conmigo,” has been nominated for Best Flamenco Record of The Year by the Latin Grammys and they will be attending the show in Las Vegas later this year.

Their live shows blend intense passion with a beauty that is simultaneously empowering and fragile. This all female group brings an energy and craftsmanship to every performance, which Las Migas will have on full display at the CCAE’s intimate Lyric Court.