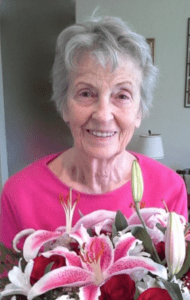 Barbara Joyce Beal was born on March 4, 1932 in Oceanside, CA at Cottage Hospital to George M. and Edna Beal of Fallbrook, CA. She grew up in Fallbrook with her grandparents. At age 15, she moved to El Soreno, Los Angeles and attended Woodrow Wilson High School. There she met and then married Donald E. Buss Sr. on August 7, 1949 in Alhambra, CA. Several years later, they moved to Fallbrook before settling in Escondido, CA in 1962. She worked at Del Dios Jr. High School for a few years and later at Palomar and Kaiser Hospital. Mr. Buss passed away in 1975.

She later met Charles O. Preece and they were married in Nantucket, MA on August 18, 1979. They settled in Scripps Ranch and enjoyed living there. She went on to show us it was never to late to go to school by earning her degree at Miramar College in 1987. Charlie was

her Prince Charming and they were like newlyweds on their honeymoon for over 24 years until his passing in 2003. She moved back to Escondido in 2015 with her daughter.
Barbara was always dressed sharply and never went anywhere without her lipstick on. If you had a project to do she was always willing to help, not afraid to get her hands dirty. She had no problem with cookies or chocolate as a before meal snack. She loved to read and enjoyed history. She loved to talk and listen to whatever subject was of interest. Enjoyed watching movies, plying board games and hide and seek. Quick to laugh, she always had a beautiful smile.

She is survived by her three children; sons Donald E. Buss Jr. and wife Linda, Dennis E. Buss and wife Toni, and daughter Diane Stones; 12 grandchildren and 11 great grandchildren. She was preceded in death by her daughter Darrolyn L. Bales- Collins in 2005 and grandson Brent Bales in 1993.

Surrounded by her family, she passed away peacefully on December 20, 2017. She lived a wonderful life and will be greatly missed!
Funeral services will be on January 27, 2018 at 10am at Grace Luthern Church 643 W. 13th Ave. Escondido, CA 92025. Visit with family following service and bring a memory of her to place in the memory jar.

One response to “Barbara Buss-Preece, 85”