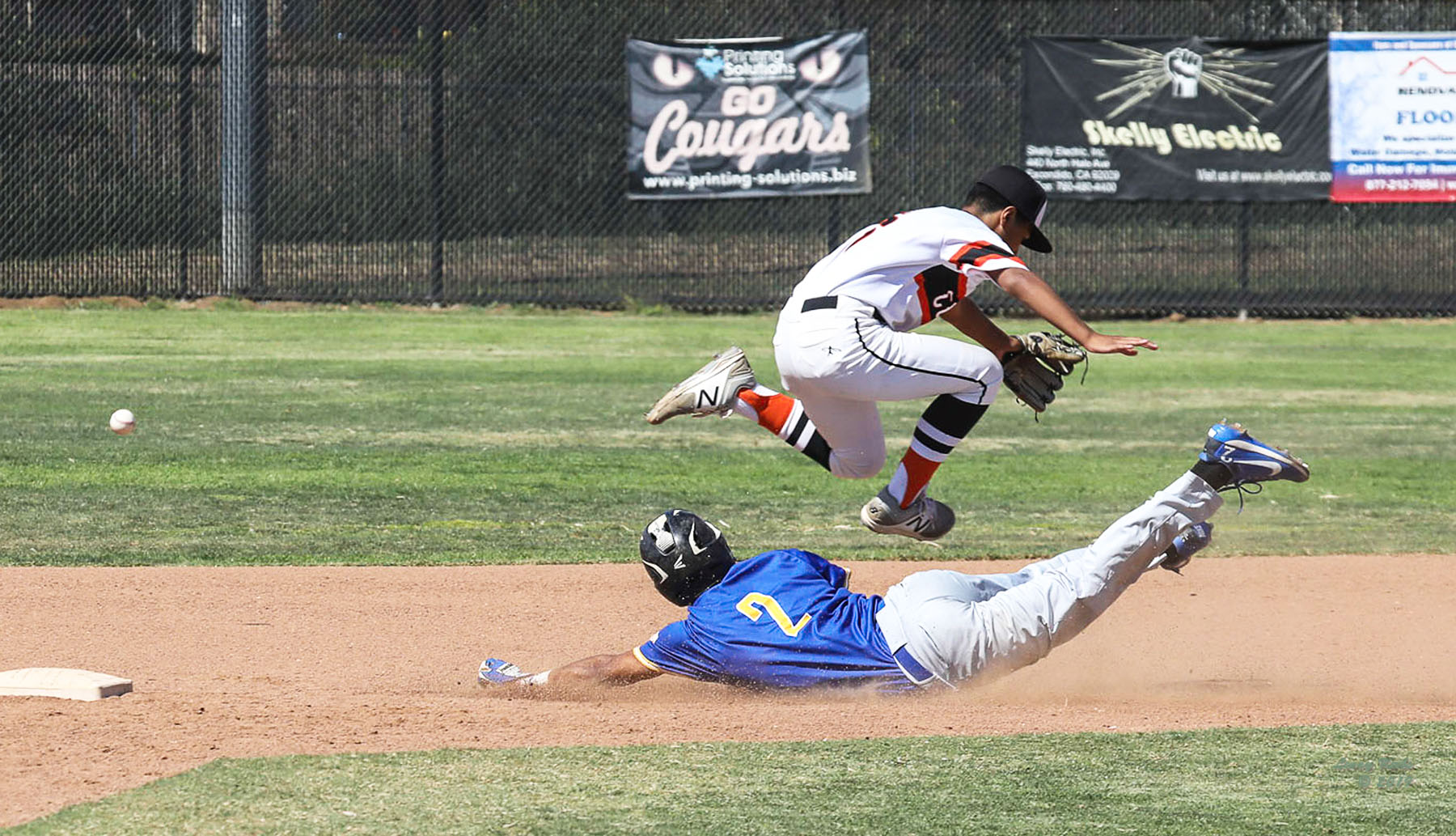 The all-around Elijah Jackson, shown here stealing a base against Escondido last year, copped 21 more this past season for San Pasqual. Photo by Lenny Kerbs

On May 24, the San Pasqual baseball team experienced the narrowest of near-misses.

Entering the top half of the seventh inning and holding onto a 5-4 lead in the Division III San Diego Section title game versus Valhalla, the Golden Eagles were just a scoreless frame away from capturing another CIF title to go along with last year’s Division IV crown. That’s how close SP was to going back-to-back and nailing down consecutive titles.

But alas, it wasn’t to be. The game Norsemen proved to be as the tenacious as the hearty breed  they’re named after having scored a pair of runs that had them carving out some diamond history of their own while denying SP another memorable finish.

Losses don’t come much more disappointing than what the G. Eagles endured. Another trophy was right there for the hoisting but SP just couldn’t quite seal the deal. It’s a setback that will definitely take time to come to grips with and one wonders if the coaches and players, having again been on the brink of reaching the summit, will ever totally get over it.

However, baseball seasons are not comprised of one game and perspective must be offered when evaluating a team’s overall performance. And by so many measures, 2019 was another highly successful and satisfying year for second-year skipper Jake Blalock and his charges.

In a campaign that produced some interesting twists and turns, SP was able to match last year’s seasonal mark of 22-11. Very solid at home (11-4) on the road (11-7) and in the competitive Valley circuit (9-6) where they finished second to formidable Ramona, there were times when the G. Eagles not only took flight but soared ever so high.

In a remarkable display of consistency, clutch performances and simply getting it done, from February 28 until an away loss to Point Loma some seven weeks later, SP captured an amazing 17 of 18 contests. That resulted in not only one hellacious roll but a full-blown avalanche of wins.

But curiously in the immediate aftermath of that marvelous streak, the Golden Eagles then hit a noticeable lull. Perhaps burdened by a bit of a letdown or simply fatigued by trying to maintain such a high standard, SP slumped, losing seven out of its last eight regular season games.

With no real momentum behind them, the No. 3 seed G. Eagles entered the postseason as sort of a mystery team but they did have relatively fresh memories of the previous year’s playoff run to remind them of their capabilities and potential.

And things got off to a positive start in the first round when SP took an early lead at home against Serra and made it stand up for an eventual 5-3 victory. Infielder Ben Lee provided the offensive punch with a triple and 3RBIs while lefthander Jansen Lublin worked into the seventh inning to pick up the win.

Then two days later, SP found itself in a real tussle with Rancho Buena Vista that wasn’t settled until the G. Eagles pushed across the deciding run in the bottom of the eighth to secure a 5-4 triumph. Josh Tuttle, Caiden Galvao and freshmen Luke Hanson and Jason Hall were impactful with each delivering an RBI. Meanwhile, it was Alec Walsh who did the heavy lifting on the mound by holding the Longhorns to just one run over the last 3.1 innings.

Next up was a semifinal matchup with second-seed and host Patrick Henry and once more SP manufactured some late magic. Trailing by a count of 4-2 at the start of the sixth, Blalock’s crew erupted for seven runs in that frame to put things away. The big bats were swung by talented veterans Tuttle and Elijah Jackson who combined for five RBIs in addition to scoring four runs. And for the second time in two games, sophomore Chase Read was efficient on the mound while picking up the victory.

Those three crucial wins, each utilizing a different recipe, put SP right back in another championship tilt but unlike the prior season, this outcome wouldn’t be to their liking. Though Jackson continued to rake with a three-hit, 3RBI display and Tuttle and Hall chimed in with ribbies, it just wasn’t enough.

Much to their credit, the Norsemen didn’t fold and came through in the clutch by reaching the junior Walsh for a brace of runs when it mattered most. In the game’s aftermath, it was left for the G. Eagles to know the anguish of being ever so close and sniffing, but not securing, a championship.

Nonetheless, it had been a special year for the G. Eagles thanks to Blalock’s deft guidance and in particular, a number of gifted ballplayers. The competitive Tuttle, who hit at a fine .343 clip, was an absolute rock as he paced the club in homers (4), doubles (12) and RBIs (34) while finishing near the top in other key offensive categories.

The smooth shortstop Jackson was another whose bat was nothing if not potent. Not only was he the team leader in triples (4) but the dependable senior rapped out 39 hits to the tune of a stellar .371 average. Jackson was also the kingpin when it came to runs scored (38) and steals (21).

Without a doubt, the newcomer Hall was SP’s biggest revelation with the stick as he delivered a monster first-year. Armed with a keen eye and reflexes to match, the amazing frosh was a masher extraordinaire en route to hitting a mind-blowing .430 that was realized because of a 46-hit output.

And where would the Golden Eagles have been without their steady and polished catcher Connor Oca who put up some notable stats as it related to hits (34) runs (25) and average (.333)?

On the bump, lefty starter Lublin authored a truly remarkable season that saw him go undefeated (9-0), post four shutouts and fashion a microscopic 1.25 ERA. In every way imaginable, Lublin was SP’s go-to hurler.

The other mainstay starter who made a real impact was righty Connor Henson who registered a 4-3 slate and an ERA of 2.98.

And as far as the relief corps was concerned, Read exerted the most influence, as he won six of the eight decisions in which he was involved.

In retrospect, these last two years will always be regarded as an important, pivotal and memorable period in the annals of SP baseball. What was achieved on the diamond was something to behold and cherish.

If only the G. Eagles could have held off the Norsemen and kept them scoreless in the season’s final inning, SP would have known that wondrous and rare feeling of being back-to-back champions.

Indeed, there’s such a fine line between a near-miss and what might have been.