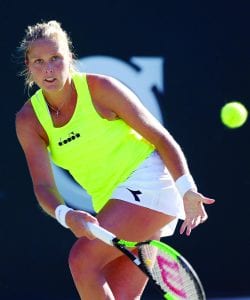 Shelby Rogers greatly aided the Aviators cause with a notable 5-3 win over the acclaimed Maria Sharapova. Photo credit: Post & Courier

Hey San Diego, who the hell needs the Chargers when you’ve got the Aviators? And if you think I’m kidding, you’d better guess again!

Because the World Team Tennis’s local franchise is everything that the Bolts weren’t – entertaining, clutch, championship timber as well as winning. Moreover, the Aviators embrace and relish the chance to represent the city. They’re mighty glad to be able to call San Diego home.

And in their Sunday night home opener held on the show court at the Omni La Costa Resort and Spa, the Aviators got off to a rousing start in defense of their Mylan WTT title with a dramatic 17-14 victory over the Orange County Breakers. Bolstered by a dominant overall performance by server deluxe Ryan Harrison and an impressive effort in singles by Shelby Rogers, the Aviators dug themselves out of a 10-2 hole and rallied for a win that had the packed home crowd rockin’ with delight. To say that the locals provided great theater and had their fans juiced doesn’t begin to tell half the story.

Before delving more thoroughly into what transpired on the court, a bit of a primer of WTT versus traditional tennis might prove helpful. To begin with, each team is made up of two men and two women plus a coach. A match consists of five sets and features men’s and women’s singles, men’s and women’s doubles and mixed doubles.

The action is particularly fast-paced because there is a service clock and there is no-ad scoring, with the first player/team reaching four points winning the game. In addition, let serves are considered good and therefore are played. The side that wins five games is deemed to have captured the set.

The scoring is cumulative so each and every game is important and contributes to a team’s overall total. Ultimately, the team garnering the most games is declared the winner.

And the atmosphere at a WTT event is lively and energized to say the least. The fans are really encouraged to get involved and do some passionate cheering by an animated public address announcer. A grooving DJ makes sure that pulsating and feet-tapping music is played between points. During timeouts and brief breaks, items such as grips, souvenir balls, candy and T-shirts are gently tossed into the stands, waiting to be gobbled up by eager patrons.

Everything seems as if it is precisely timed and choreographed. When attending a WTT match, you can’t help but be struck by the obvious organization as well as the professionalism that’s exhibited. You’d be hard pressed to find a sporting event more efficiently run or that more effectively caters to the fan. Nowadays, it seems as if most everyone craves an experience when they seek entertainment of one type or another. Well, I’m here to tell you that the Aviators provide that in abundance.

As for the match itself, it was one of seismic shifts and extremes. The opening set featured mixed doubles and the Breaker duo of Ken Skupski and Andreja Klepec got the visitors off to a fast start by clearly getting the best of the Aviators’ Raven Klaasen and Darija Jurak. With the lefthander Skupski, who hails from Great Britain, serving and volleying effectively and coupled with Klepec’s deft touch at the net and ripped forehands, the Breakers rolled to an impressive 5-1 victory.

Next came the women’s doubles and for OC, the beat went right on. In this set, Klepec was joined by the accomplished future Hall of Famer Maria Sharapova. It was hard to argue that the tall, statuesque and sleek Sharapova wasn’t the evening’s prime drawing card.  Having earlier this year returned from a lengthy and somewhat controversial suspension due her use of a banned substance, Sharapova was looking to shake off the effects of a thigh injury that prevented her from participating at the recent mother of all Grand Slam events, Wimbledon.

And Sharapova and Klepec proved to be a formidable combination in taking out Jurak and her partner Shelby Rogers. With Maria contributing a pair of nice volleys, a forceful putaway, a rocketed backhand winner and some well-struck serves, OC had things going its way. For her part, the Slovakian Klepec maintained her high level of play with a ripped backhand winner and a soft touch at the net. The unsung Klepec was a genuine revelation with her steadiness and consistency. With Sharapova and Klepec meshing so seamlessly, they had little trouble in taking the set 5-1 and staking their team to a substantial 10-2 lead.

In such a deep hole, the Aviators were in desperate need of an immediate and momentum changing turnaround. And that’s exactly what they got in the personages of Ryan Harrison and Klaasen who flipped the match’s dynamic with a notable one-sided effort in men’s doubles. 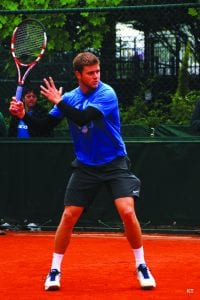 Ryan Harrison was clearly the night’s standout as he excelled in both singles and doubles. Photo credit: Wikimedia Commons

Harrison, currently ranked #41 in the world singles rankings, exuded a perceptible confidence and positive vibe the minute he stepped onto the court. Blasting kick serves with regularity, drilling groundstrokes from both wings, volleying sharply and coming up with scoop shots that truly amazed, the hunk Harrison was totally locked in. Meanwhile, the talented Klaasen, who has 12 ATP doubles titles to his credit, was the perfect complement to Harrison, demonstrating exquisite touch which included a three-shot volley sequence that nearly defied belief. In the face of such an onslaught, Skupski and his Breaker teammate Teymuraz Gabashvili stood no chance and were easily dispatched 5-1. Suddenly, the Aviators were right back in the thick of things having narrowed the margin to 11-7.

And then came the women’s singles and buoyed by a quick start, a strong finish and enthusiastic support from the partisan crowd, Rogers produced a noteworthy 5-3 conquest of Sharapova. Shelby was able to parlay a lasered forehand winner and a honey of a volley into an early 2-0 advantage.

But Sharapova is nothing if not one of the most dogged competitors in tennis and she gamely battled back. Ginning up her serve that delivered three aces and generating powerful winners from both wings, Maria soon found herself ahead 3-2. But Rogers, ranked #49 in the world, showed her mettle and grit by holding serve, thanks in part to a dandy forehand.

And when Sharapova missed on a chip shot and then sprayed a forehand wide, Rogers was once again ahead and positioned to close out the set. Not wanting to fritter away the opportunity to get the better of one of game’s all-time greats, Rogers rolled a perfectly placed forehand into the corner beyond Sharapova’s reach and that was the shot that sealed the deal at 5-3.

Rogers reacted with glee and a huge smile as she raced off the court to be embraced by supportive teammates. She had clearly risen to the occasion with timely shotmaking when it mattered most.

Nothing should take away from the impressive effort of Rogers but Sharapova, obviously still in the process of honing her game and appearing a bit rusty after a lengthy layoff, did miss long on forehand shots that normally should have been right in her wheelhouse.

Thanks to the Rogers’s win, the Aviators had sliced the margin to a slim 14-12 and with the on-fire Harrison primed for his upcoming singles set versus Gabashvili, the sentiment was that the Aviators were destined to come all the way back and secure a victory that at one time seemed rather remote.

And indeed, that’s exactly how things unfolded. Simply put, there was just no stopping the juggernaut that Harrison had become as he thoroughly overwhelmed his opponent. He virtually could do no wrong. Pounding first serves that resulted in multiple aces, Harrison kept Gabashvili constantly off balance. Moreover, the Aviator standout also had a loaded-up forehand at his disposal that became a thoroughly devastating weapon.

Watching Harrison hit out with such abandon and belief was inspiring as he had found himself truly in a zone. Operating at such a high level, it came as no surprise when Harrison authored a lopsided result, smoking Gabashvili in five straight games which brought the final count to 17-14 in favor of the Aviators. Needleless to say, it had been one heck of a comeback and a remarkable reversal of fortune.

The Aviators will really dive headfirst into their schedule this upcoming week with two road and two home contests, the last of which will be contested at La Costa on Saturday at 7:00 p.m.  against the Springfield Lasers.

Based on their outing versus OC and their status as defending WTT champs, taking in an Aviator match might be one of the city’s best sports values when it comes to getting real bang for your buck. You’d be doing yourself a big favor by making the effort to check them out because this team is highly entertaining, quite compelling and can really bring it. If you have any doubts, just ask the vanquished Breakers.